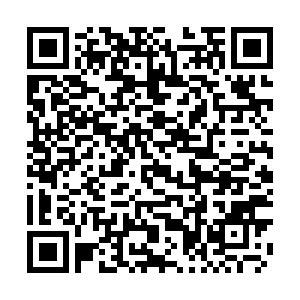 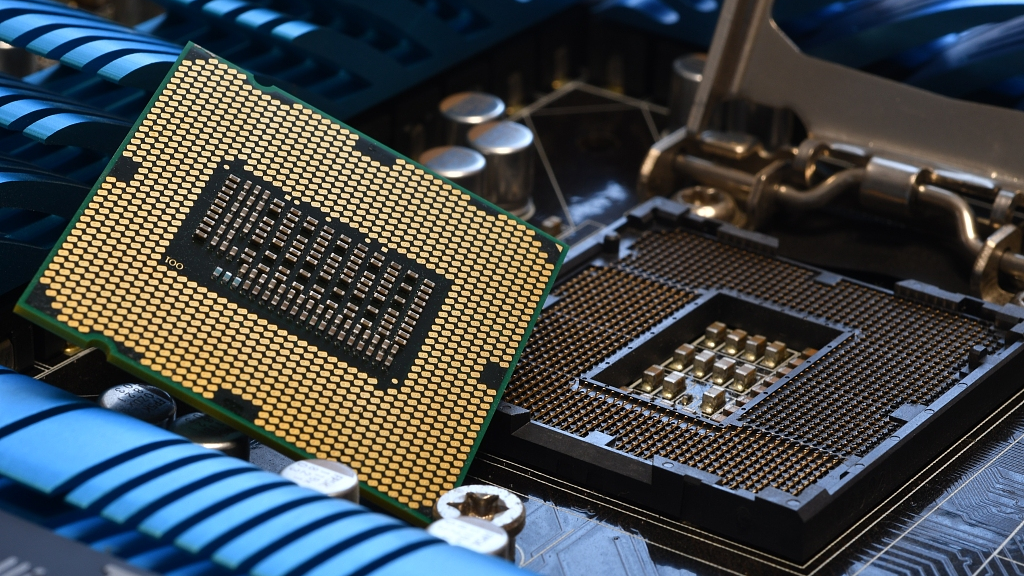 Chinese chipmaker Semiconductor Manufacturing International Corp's (SMIC) first week of trading was dramatic. With high hopes from investors, its shares opened with a price of nearly 250 percent higher than the offering price. The closing price slid down by 24 percent from the first day's opening price as of Friday. Still an impressive performance.

Against the backdrop of escalating geopolitical tensions between China and the United States, technology has become one of the latest battlefields after the U.S. blacklisted dozens of Chinese tech companies, with telecom giant Huawei the first to bear the brunt.

Many Chinese tech companies have turned to domestic markets to list and their shares have rallied as investors bet they can gain from Beijing's stepped-up efforts to build a homegrown supply chain, especially in the area of chip manufacturing.

Is SMIC worth market exuberance?

SMIC, debuted on Shanghai's Nasdaq-style STAR Market on July 16, was the biggest IPO in the Chinese mainland in a decade, raising 53.2 billion yuan (7.58 billion U.S. dollars).

Regarding the market exuberance towards SMIC in the first week, Jiang Hao, assistant portfolio manager at Shanghai-based hedge fund Jiuyan Asset, said that SMIC is absolutely a leader in China's chip manufacturing, "The company stands at a core position in the industry, where it can benefit from supportive development policies from the country."

Pioneering China's efforts to replace imported chips, the chipmaker is poised to have a large room for growth in the future, Jiang said.

"The firm is of obvious scarcity that makes it irreplaceable and difficult to be copied. So I think giving it a higher valuation is reasonable," he added.

Catching up with cutting-edge tech

SMIC is projected to rank fifth with revenue of 941 million U.S. dollars, taking 4.8 percent of the market cake.

Advanced manufacturing technology is the biggest bottleneck in the development of the semiconductor industry in the Chinese mainland, Jiang told CGTN.

There are significant gaps between SMIC's most advanced process and the world's most cutting-edge technology, he said, "SMIC is facing challenges of upgrading manufacturing technologies to meet the urgent domestic demand of high-end chips."

TSMC is leading the global semiconductor manufacturing with its 5nm Fin Field-Effect Transistor (FinFET) process that is currently the most advanced level entering volume production.

The technology entered risk production in March 2019 and is targeting mass production in 2020, according to the company's website, with progress ahead of its major competitor Samsung Electronics Co. TSMC is also developing the more sophisticated 3nm process which is scheduled to begin production in 2022. 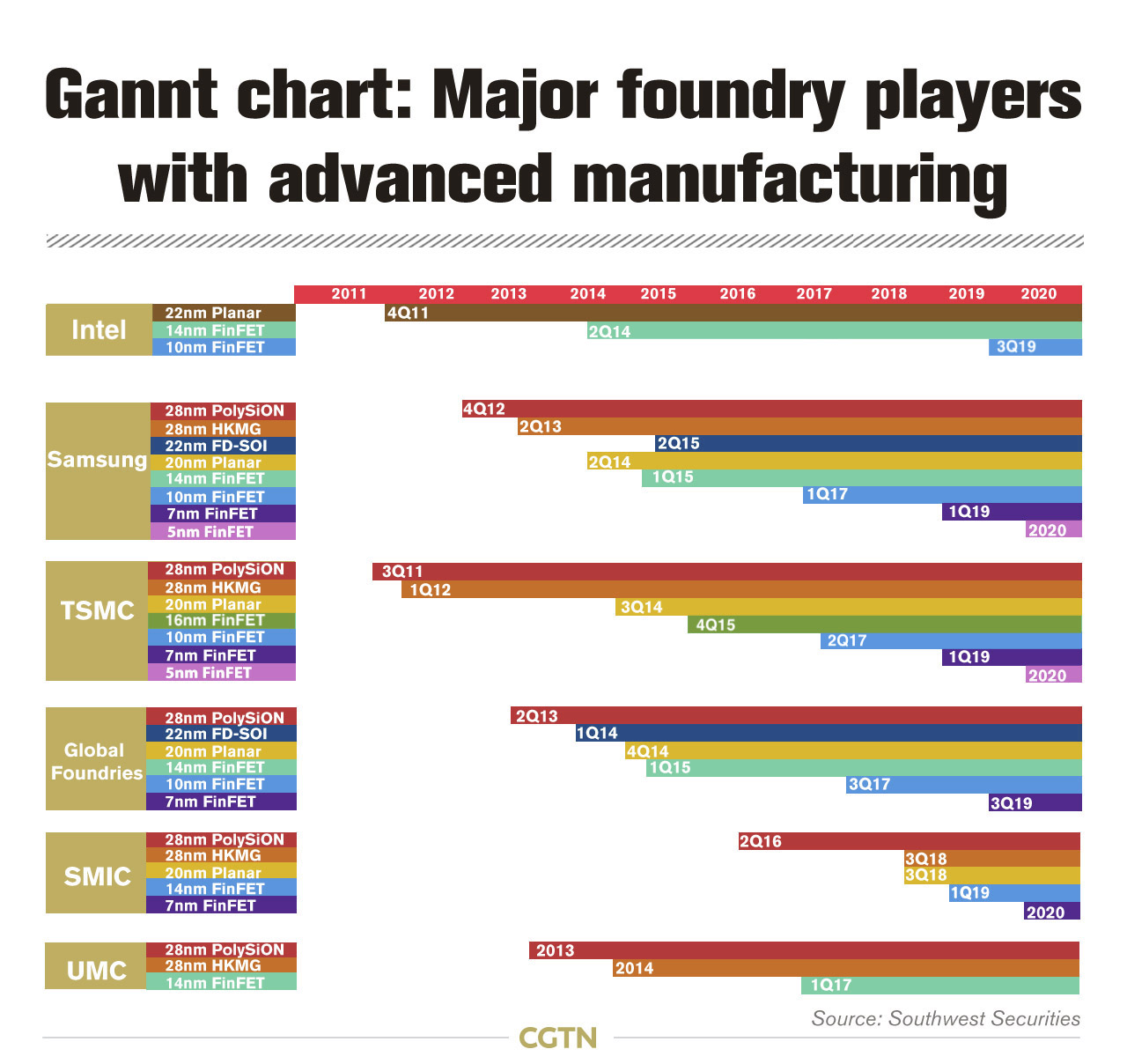 Although its a latecomer to the chip-making field, SMIC mass-produced 14nm FinFET process in 2019 and is speeding up the R&D of 7nm process, which aims to ramp up by the end of the year.

"SMIC must conquer the 10nm and 7nm process in order to catch up with TSMC. The journey will be long," Jiang said.

Moreover, he added some other underlying challenges for SMIC, "Chip manufacturing relies heavily on manufacturing equipment that is produced by European, American and Japanese companies, and the key equipment, extreme ultra violet (EUV) lithography machine, from (Dutch chip-making equipment manufacturer) ASML may also face the risk of supply cut-off."

The overall picture of the semiconductor industry is that it is still dominated by overseas companies, but domestic companies are rising rapidly, Jiang said.

According to IC Insights, China market was the only major region that showed an increase in pure-play foundry sales last year, while the European and Japanese pure-play foundry markets each displayed a double-digit decline. 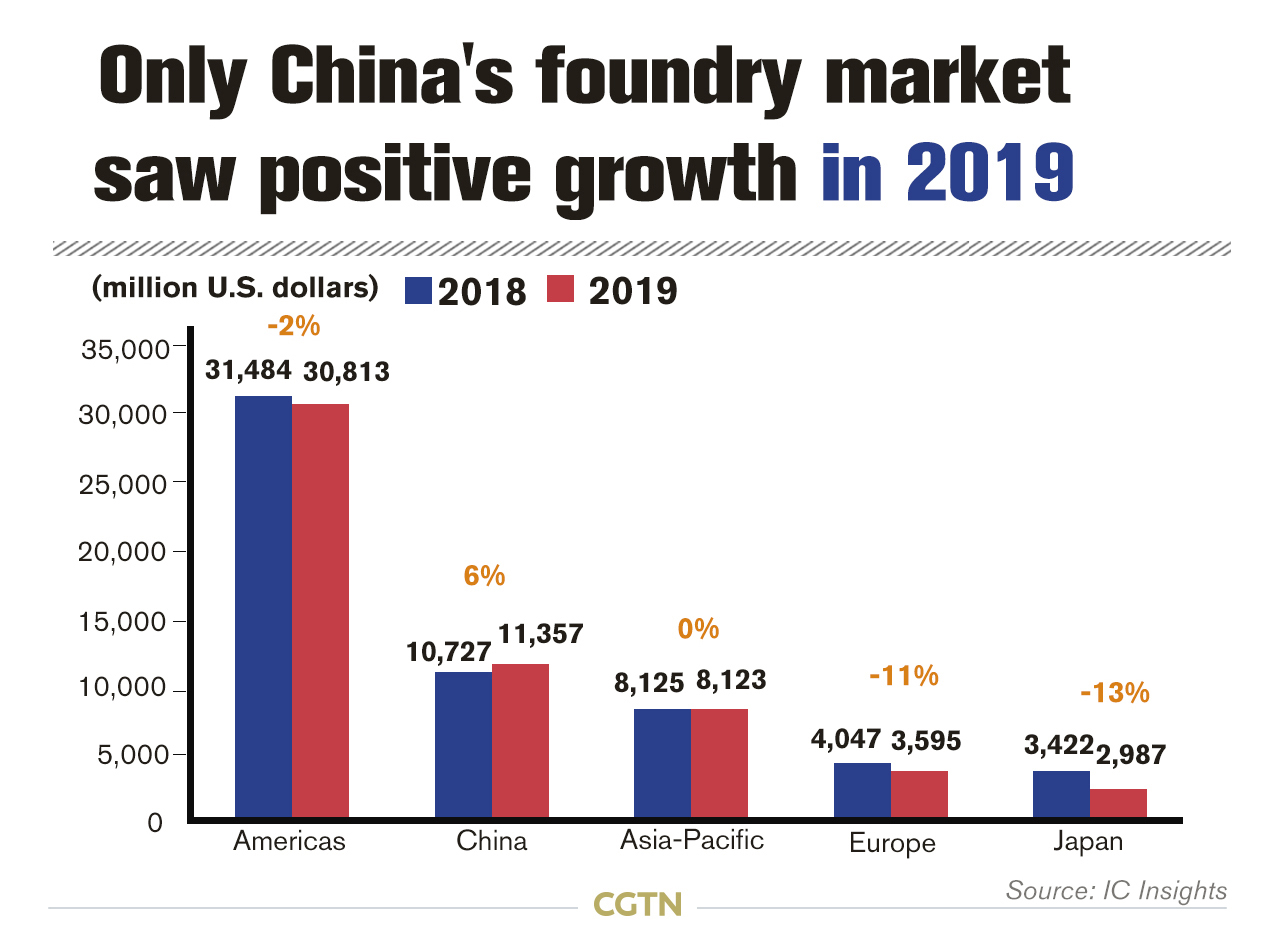 China's semiconductor industry is still at a relatively low-end level, ranging from raw materials, equipment, chip design to manufacturing, Jiang said, adding that "There are still pronounced gaps when compared with the world's first-class level, but China's development momentum is very strong. The country now has a stronger capability in the field of chip packaging and testing, which have ranked in the first-tier worldwide."

At present, China's semiconductors are very dependent on imports. But "in order to build an independent and controllable industrial chain and to meet the needs of China's domestic market, I believe that the domestic substitution of semiconductors must be promoted as soon as possible," Jiang said.

He also cautioned the biggest challenge for China's semiconductor industry may lie in the fact that the relevant basic science is relatively weaker, and it is difficult to break through the situation where key technologies are restricted by overseas players in a short-run.

"The positive thing is that China has successively introduced a series of policies to accelerate the process of domestic substitution in the industry."

(Cover via CFP; graphics by Jia Jieqiong and Li Jingjie)