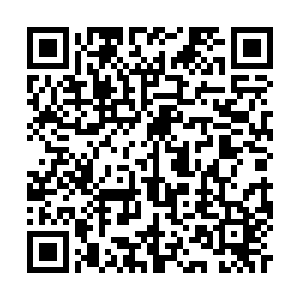 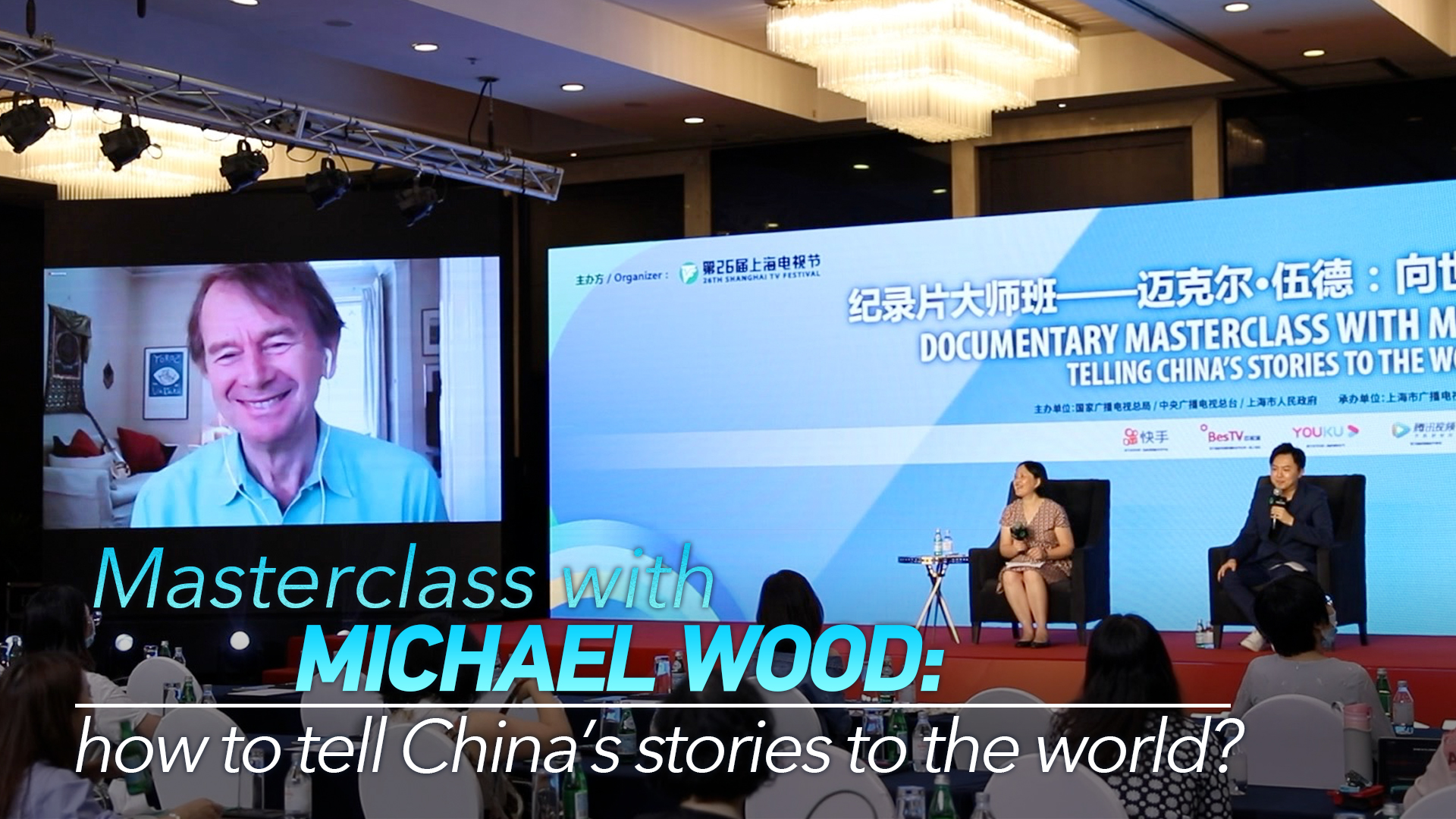 In an era of baffling bias and alternate facts, how do you explain the real story of China to the world beyond its borders? It's undeniable that some information gets lost in translation; it's also true that plenty gets twisted for many a reason, especially in the aftermath of the coronavirus pandemic.

Michael Wood, a professor of public history at the University of Manchester and director of the hit documentary "Du Fu: China's Greatest Poet," shed a light on this issue during a masterclass during the Shanghai Television Festival this week. 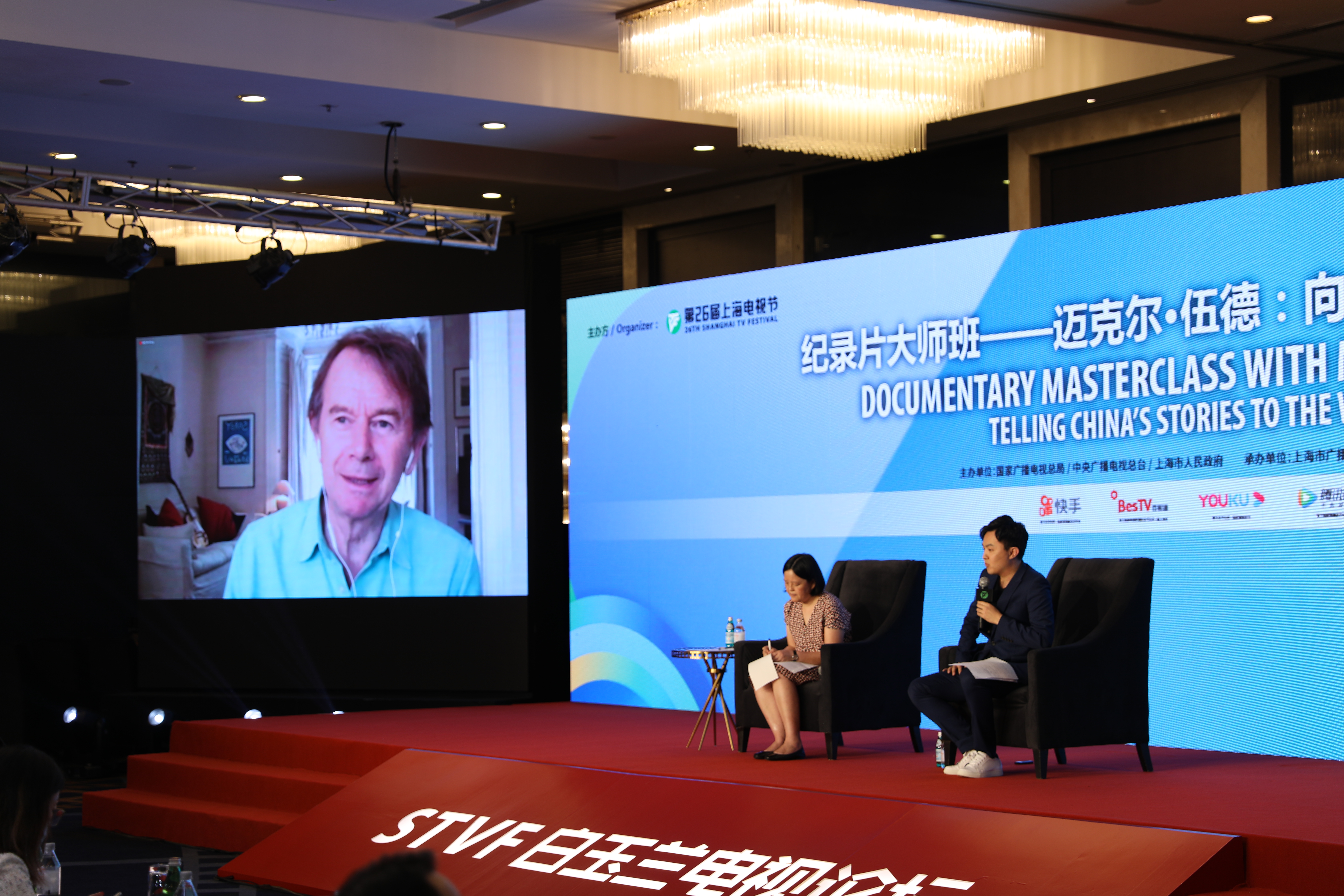 Michael Wood during his masterclass held virtually as part of the Shanghai Film Festival. /CGTN

Michael Wood during his masterclass held virtually as part of the Shanghai Film Festival. /CGTN

Du Fu was a force to be reckoned with in the literary circle in the Tang Dynasty. The era is thought to be the pinnacle of ancient poetry as literati tackled topics of common concern at the time in a simple yet sophisticated way.

"Du Fu: China's Greatest Poet" has proven popular among young Chinese. On Bilibili, commonly known as China's YouTube, countless comments flash on the screen when you're watching the documentary. 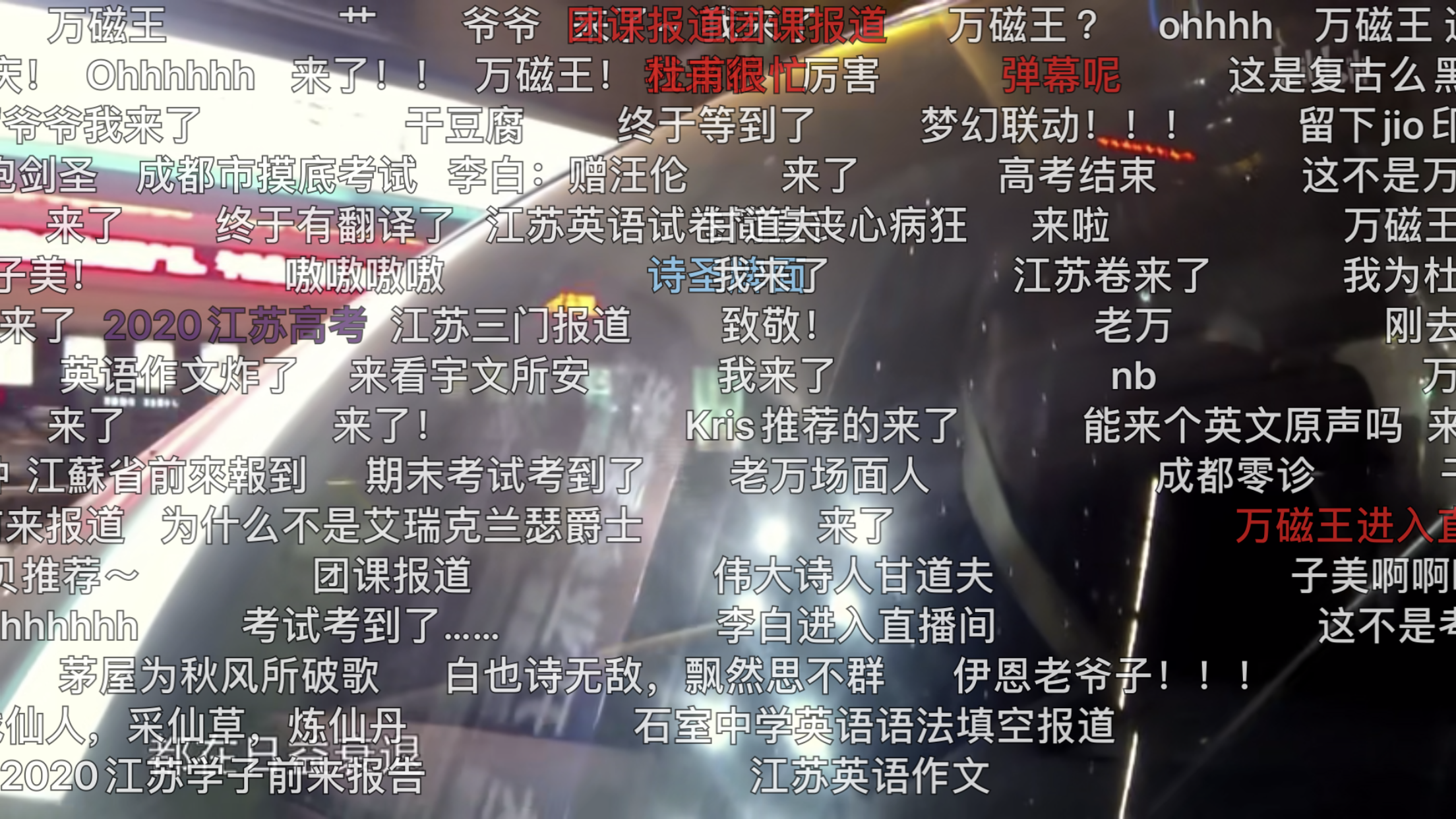 In the film, British actor Ian McKellen, who gained fame in China for his role in the Lord of the Rings series, reads Du Fu's work,as professor Wood follows the poet's footsteps, traveling around the country and listening to local people's stories about the man known as one of China's greatest poets.

In his masterclass this week, professor Wood explained how the idea for his documentary came about and the different ways to bridge the communication gap between China and the West.

His fascination with Du Fu began at the young age of 16, when the then schoolboy got his hands on a book of the Chinese writer. Having made a documentary about Shakespeare, a literature icon in the English-speaking world, Wood thought a program on Du Fu would appeal to Western audience.

He wanted viewers, in and outside of China, to better understand traditional Chinese poetry through the verses of Du Fu.

An art form with roots going back to over 4,000 years, as far back as the Shang Dynasty, ancient poetry remains relevant in modern China. When Wood was in the southwestern city of Chengdu filming, he was fascinated by the sights of scores of people visiting the poet's residence and reciting his works. Wood says that Du is not only a great poet but also a symbol of the traditional Chinese values. 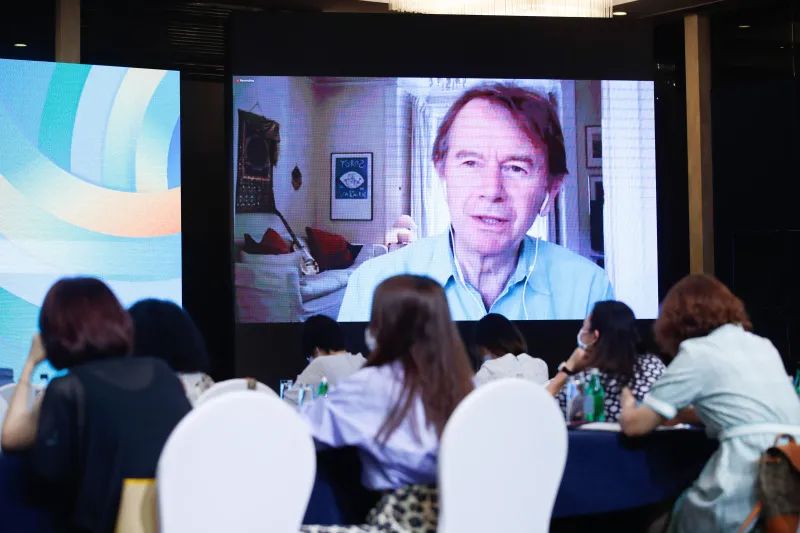 Michael Wood during his masterclass held virtually as part of the Shanghai Film Festival. /STVF

Michael Wood during his masterclass held virtually as part of the Shanghai Film Festival. /STVF

In the documentary, Wood retraces the life journey of Du Fu from Chang'an to Sichuan. At every stop, he made sure to talk to locals, listen to their stories and interact with them. That was the only way he was able to understand who the real Du is. The contribution of ordinary people and strangers they met on the road gave the film its dynamic nature and richness. The filming crew had a loose plan in place as they wanted the magic to happen on site through interviews. In one instance in Kaifeng City, central China's Henan, they came across an old man by chance and he was willing to perform the story of the city's ancestors to them.

The Wall Street Journal has described Wood's films as "the gold standard" of documentary history making. For the filmmaker, this encompasses three functions: to inform, educate and entertain.

Many misunderstandings plague the world today, Wood says, but documentaries can bring people to understand each other better, to sympathize and empathize with others.

Professor Wood said he doesn't have an audience of priority. For example, before shooting the Story of China (2016), a collection of personal stories from across the country, the crew had clear goals to make the film with "empathy, affection, and warmth." But Wood also wants his audience to think after watching his films. 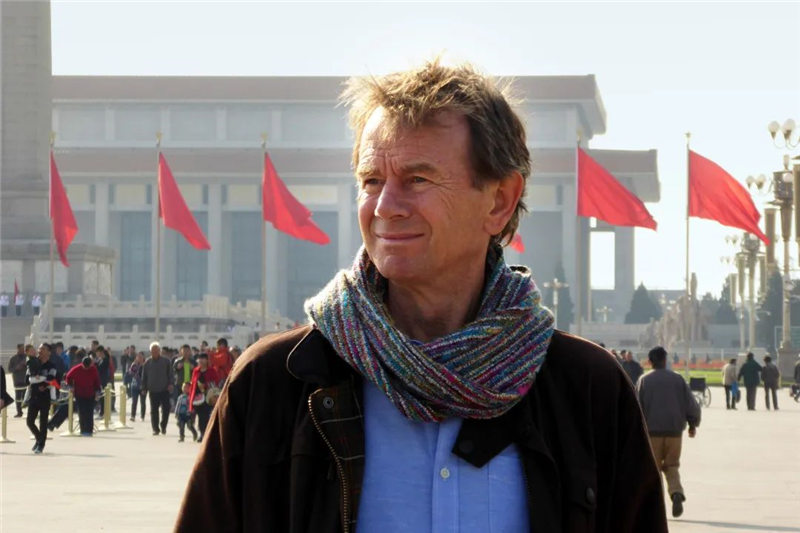 Michael Wood on the filming location of his documentary in China. /STVF

Michael Wood on the filming location of his documentary in China. /STVF

Speaking about Sir Ian McKellen's readings during the documentary, Wood said McKellen "reads Du's poetry with such emotions, it almost felt like Du himself was talking to the audience, telling his own stories. When Ian was reading My Life's Adventure, it's almost like Du is looking back at his own life journey, so powerful and affecting."

Wood also had an advice for young students and future filmmakers in China: "You should never forget your passion, because passion will support you all your career life. So don't forget that."

"Please make [films] with empathy and affection. If you are doing a documentary on another culture, try to put yourself in their shoes."

CGTN got the chance to sit down with Wood after his masterclass. Below is a transcript of the interview, edited for brevity and clarity. 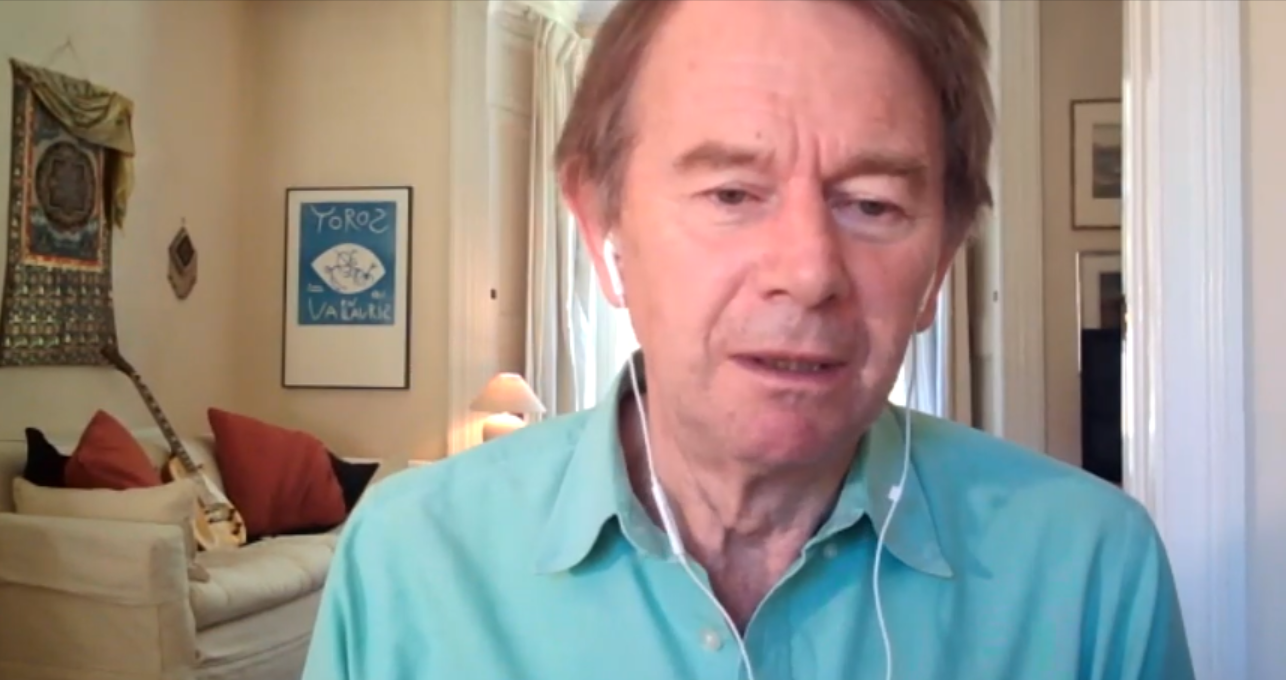 Michael Wood: We got a very good response from the audience. It was played on an arts channel and the size of the audience was not huge, but the response, especially from people who are high in education and culture, was very warm. A lot of people felt that it was the first film that had ever been made, and certainly on British TV, maybe in the West, about Du Fu. People felt it opened the door to a world that they didn't know existed. Many people wrote to us saying: "Where can I find translations of Du Fu's poems?"

CGTN: How do you think films, whether fiction or nonfiction, can bridge the gap between cultures?

Michael Wood: Many people wrote to us saying the Du Fu documentary seemed very timely because of the massive global pandemic. There's a lot of anti-Chinese rhetoric, and especially in America, which is unfair. But here is a film which is about the humanity of Chinese culture and it gets you into the hearts of things, about feelings and values. And of course, we never planned it that way. We shot the film in September. But a lot of people felt that it contributed towards mutual understanding between cultures. It was the same with my documentary "The Story of China." It gave you an insight into the Chinese culture in a way that you don't normally get.

The issue on television is mainly that China is represented from the angles of a one-party state, modern development, and environmental problems. "The Story of China" and "Du Fu" represented China in a completely different way. And I think I've never been stopped so many times on the London metro by complete strangers. They were saying to me: "I never dreamed that it was like this.I never understood the Chinese culture was so rich. It made me want to know more.” I went back for a small event in Beijing a couple of years ago, and on the plane from London there was a whole bunch of Americans who had seen "The Story of China," and it inspired them to come to China.

CGTN: What aspects of Chinese culture are more popular among Westerners?

Michael Wood: Food is the thing that most people know. Chinese films are also big in the West. But very few people know about Chinese poetry.It's so important in China and that was the point of our film about Du Fu. People in the West don't know that China is the oldest living poetic tradition in the world with 4,000 years of poetry, older than the oldest surviving Greek poetry. People don't know about Du Fu, they know about Shakespeare.

CGTN: How do you think documentary producers can help China and the West better communicate through culture?

Michael Wood:I think documentary makers have a duty to be fair, to show empathy for other cultures and to show to their own culture the interesting things in other cultures. That's what documentaries are supposed to do, isn't it? I am talking about cultural and historical documentaries, and the important thing about them is to build bridges.

CGTN: What do you think of the future for Sino-foreign documentary cooperation?

Michael Wood：I can't look into the future, but I hope that this will continue. For the last few years,we have made a dozen films in China. The cooperation has been great. People have asked whether it's difficult to film in China, and it’s really not. We had amazing interviews in the making of "Du Fu." Our experience of filming in China has been good. I know things will change now, for a variety of reasons, because of international issues. But I hope it won't stop filmmaking. I am a firm believer that dialogue is the way forward and that building bridges is really important because the more you demonize another culture, the more you express antagonism to it, the more dangerous things are. And it's just not the way to go.

Who is Michael Wood?

Michael Wood is a historian, broadcaster and filmmaker who for almost 40 years has brought history alive for viewers and readers in Britain, the United States and worldwide. He is the author of several best-selling books on English history and has made 120 documentary films, which have been seen around the world.Among them are “In the Footsteps of Alexander the Great,”to date seen in over 150 couturiers and territories, and "The Story of India," which the Wall Street Journal described as "'the gold standard' of documentary history making." Xinhua news agency said his documentary "The Story of China" had "transcended the barriers of ethnicity and belief and brought something inexplicably powerful and touching to the TV audience." His latest film is "Du Fu: China's Greatest Poet" for CCTV and the BBC. His book "The Story of China" will be published in the autumn of 2020. Wood is currently a professor of public history at the University of Manchester – a university with strong ties to China and the biggest Chinese student body in Europe. He is also president of the Society for Anglo-Chinese Understanding (SACU), whose goal is to promote friendship, mutual respect and understanding between the British and Chinese people.