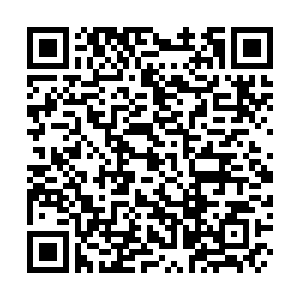 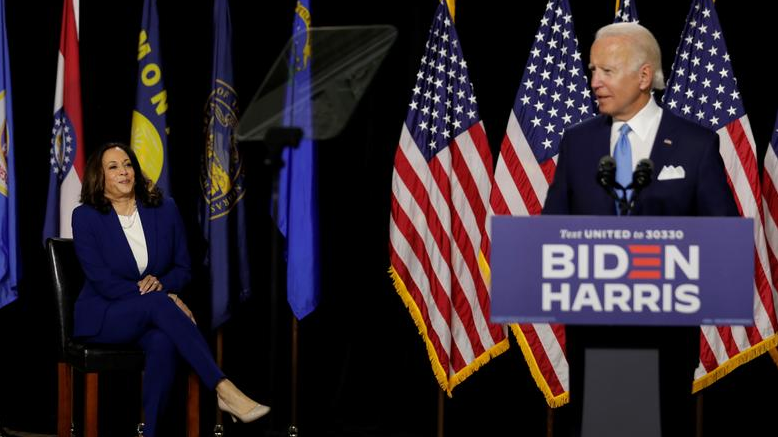 Presumptive Democratic nominee Joe Biden and his running mate Kamala Harris launched their joint bid for the White House Wednesday, with vice presidential nominee Harris saying Americans are "crying out for leadership" to overcome a triple crisis of health, racial injustice and a ravaged economy.

Harris's participation, announced on Tuesday, was a move seen acknowledging the vital role Black voters will play in Biden's bid to defeat President Donald Trump in the November 3 election.

Making their first appearance as running mates, before a small crowd of reporters and staffers at a Delaware high school closed to the public due to coronavirus concerns, the Democratic duo vowed to end Donald Trump's presidency and, in Biden's words, "rebuild this country."

"Everything we care about," said Harris. "It's all on the line."

A formidable 55-year-old U.S. senator from California and a daughter of immigrants, Harris has already made history as the first woman of color tapped for a major party presidential ticket.

Describing a country at the crossroads, she left little doubt of her determination to go on the attack, saying Trump "just isn't up for the job" and has left the nation "in tatters."

"America is crying out for leadership, yet we have a president who cares more about himself than the people who elected him," said Harris. 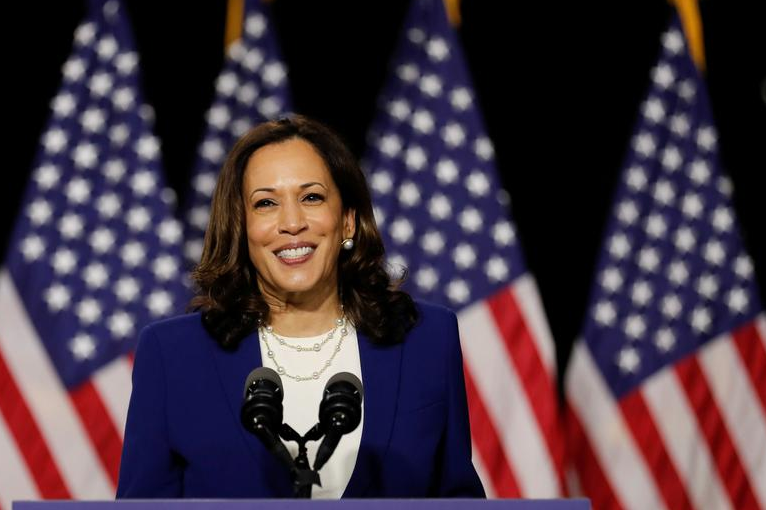 Despite the awkwardly intimate setting, a far cry from the typical campaign rollout featuring an audience of thousands, Harris appeared telegenic and confident in her first speech as vice presidential nominee – for which she and Biden both arrived wearing facemasks.

"The case against Donald Trump and Mike Pence is open and shut," said the former California attorney general as she assailed the president's "failures of leadership" on containing the deadly pandemic and reviving a hobbled economy.

The daughter of Indian and Jamaican immigrants to the United States sought to tap into the nationwide upheaval over police violence and racial disparities.

"We're experiencing a moral reckoning with racism and systemic injustice that has brought a new coalition of conscience to the streets of our country demanding change," she said.

For Biden – who leads Trump in most national polls and in swing states like Florida and Wisconsin despite conducting the campaign mostly from his Wilmington home – his VP reveal marks a crucial moment as he aims to build a broad coalition of voters to defeat Trump.

In choosing Harris, Biden is embracing a former rival from the Democratic primary who is familiar with the unique rigor of a national campaign. Harris, the first-term senator, is also one of the party's most prominent figures and quickly became a top contender for the No. 2 spot after her own White House campaign ended. 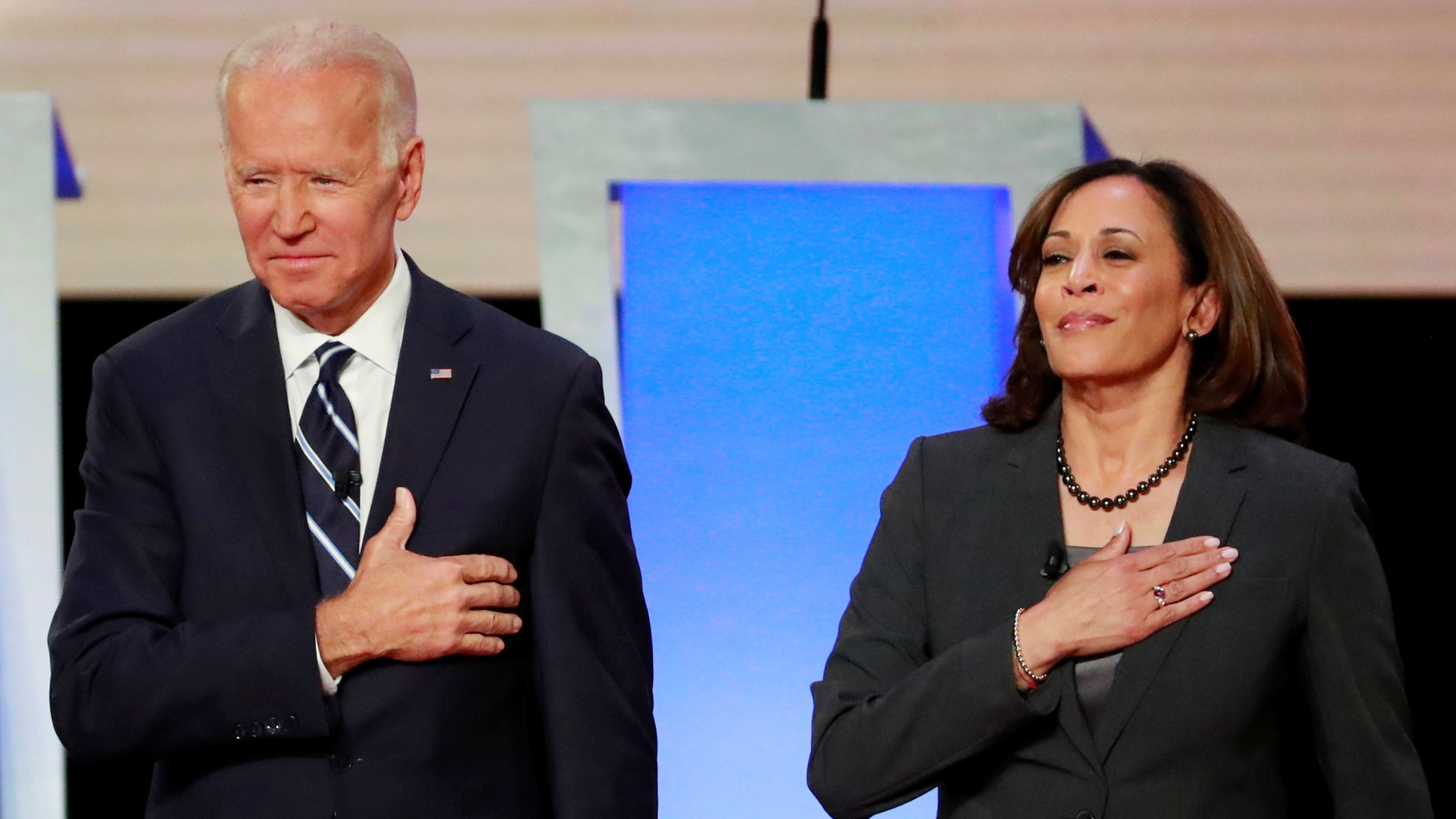 Biden spoke of why he chose Harris as his partner, stressing she was a tough and experienced legislator who is "ready to do this job on Day 1."

And he said that Harris' story as the child of immigrants and a woman of color who fought her way to the top ranks of U.S. legal and political circles would inspire the country.

He also laced his remarks with optimism about the future, promising that a Biden-Harris administration will do what it takes to "turn the corner on this pandemic."

The Biden-Harris ticket already strikes a contrast with 2016, when nominee Hillary Clinton and running mate Tim Kaine struggled to unite a Democratic Party weakened by infighting between her supporters and those of progressive candidate Bernie Sanders.

Harris' politics are to the left of Biden's, but the pair have made a point of highlighting their shared values and goals – despite their clashes during the primaries last year.

She is the first Indian American to be a presidential running mate, personifying the diversity seen as key to building enthusiasm for the Democratic ticket – and black lawmakers and activists were largely thrilled with the pick.

Harris, who is two-decade Biden's junior, could appeal to women voters, particularly those in the U.S. suburbs who have been leaning away from Trump. The former California attorney general also personifies the diversity seen as key to building enthusiasm for the Democratic ticket.

Trump, who last month acknowledged Harris would be a "fine choice" for Biden, attacked her following Tuesday's announcement as "nasty" and a radical leftist who would implement "socialized medicine" and confiscate Americans' guns.

Biden sniped at the presidents' attacks, asking if anyone was "surprised Donald Trump has a problem with a strong woman?"

Biden's pick of Harris drew ringing endorsements from other quarters – including Barack Obama, America's first black commander in chief. "She is more than prepared for the job," tweeted Trump's predecessor. "This is a good day for our country. Now let's go win this thing."