Digital Safari: Who are the major predators that feed on wildebeest?
CGTN 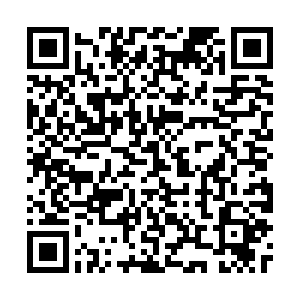 Editor's note: For an entire month starting August 17, CGTN has brought this year's Great Wildebeest Migration to your living room with our new series "Digital Safari." Let's jump onboard and get to know more about these amazing wild animals and the wonderful nature.

The wildebeest, a large herbivore that moves in herds, is definitely an animal that you can't miss if you go on a safari in Africa. Every year, the migration of giant herds of wildebeest, accompanied by other animals including zebras, gazelle, impala and eland, is truly a spectacular event. 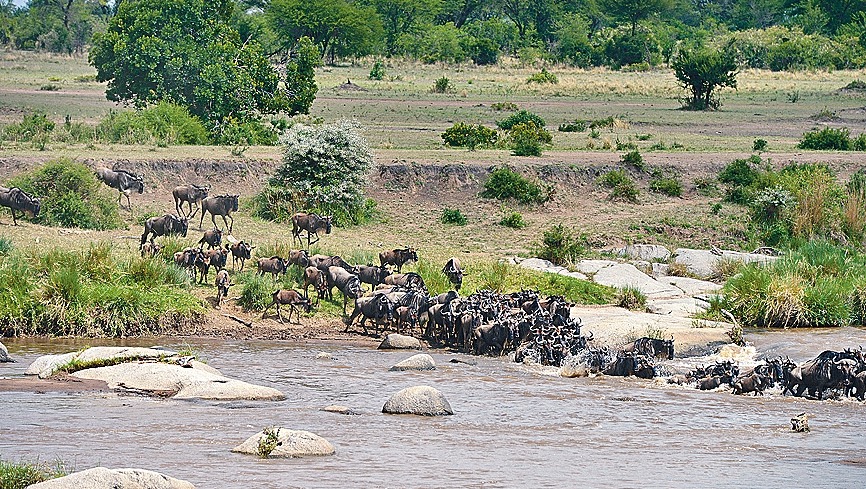 So why do we always see zebras and wildebeest together? It's because zebras eat long grass and wildebeests eat short grass. Plus, zebras have a better memory, so they can lead wildebeests to safe places while wildebeests, who have great sense of smell, can help zebras find water in dry savannas. 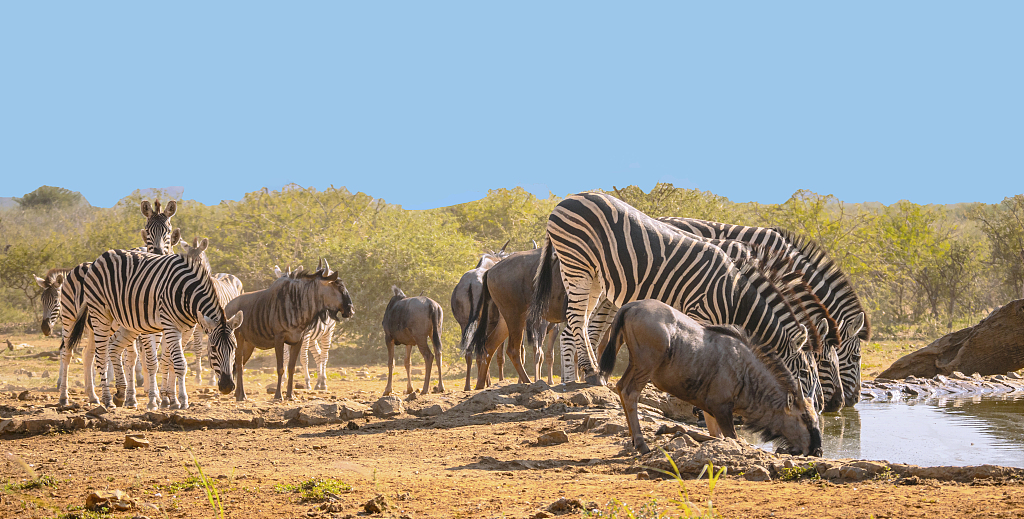 Zebras and wildebeests are often seen together. /VCG

Zebras and wildebeests are often seen together. /VCG

The major predators that feed on heavy build wildebeests are lions, hyenas, cheetahs and wild dogs. The wildebeest is actually one of the top preferred preys in the savanna. In order to defend themselves, the animal always stay together. They stick to a grouping strategy which can reduce their risk of being attacked. The open savanna helps them see the background better and they also respond to the alarm calls of other animals. 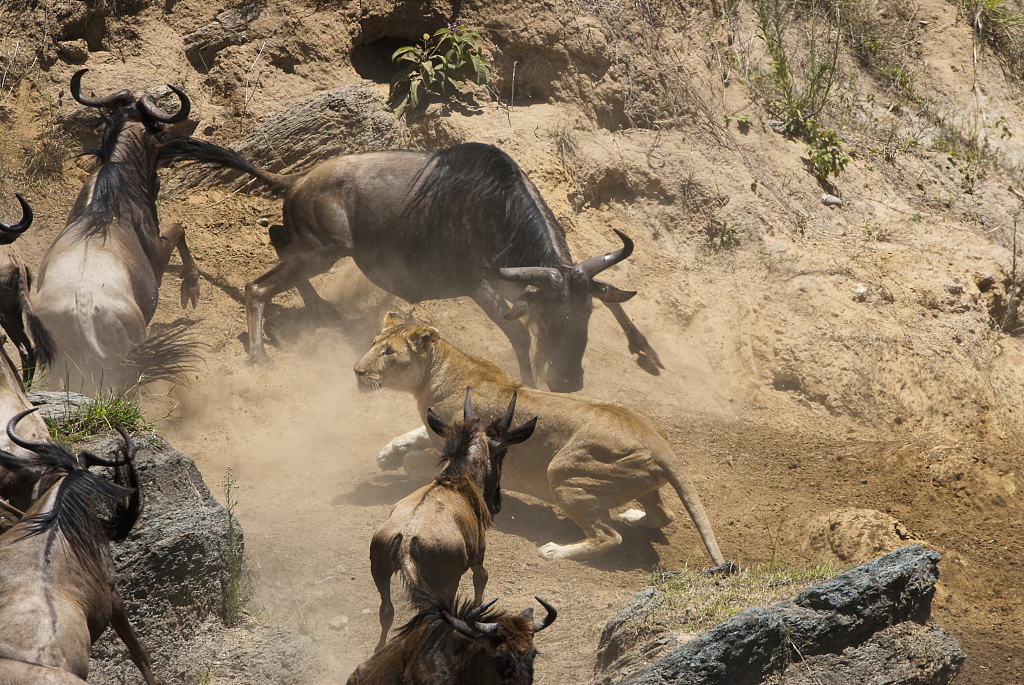 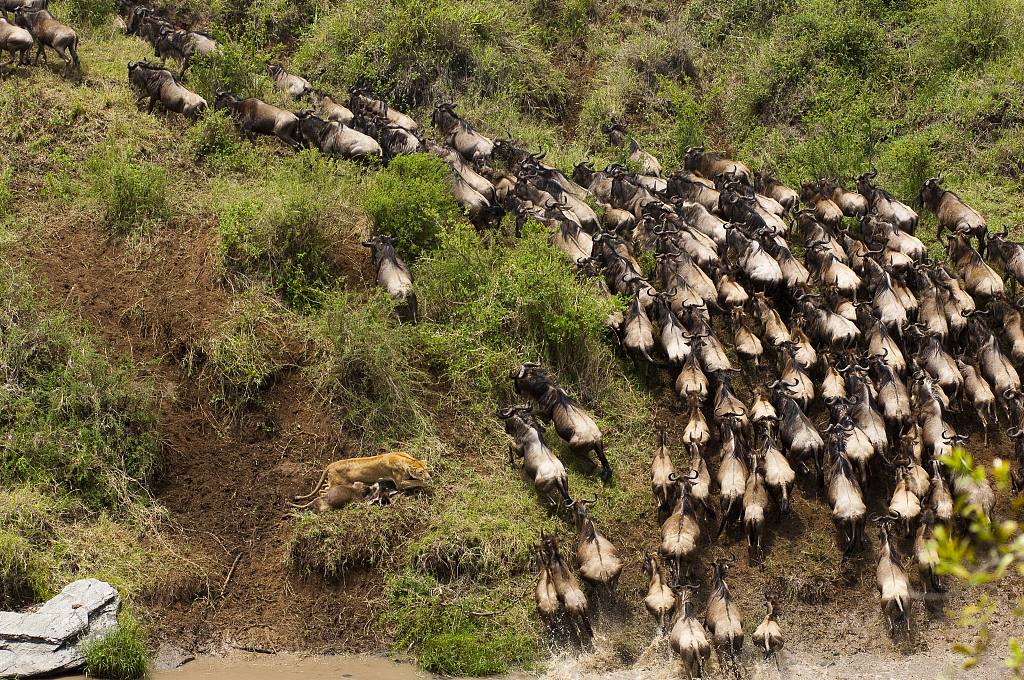 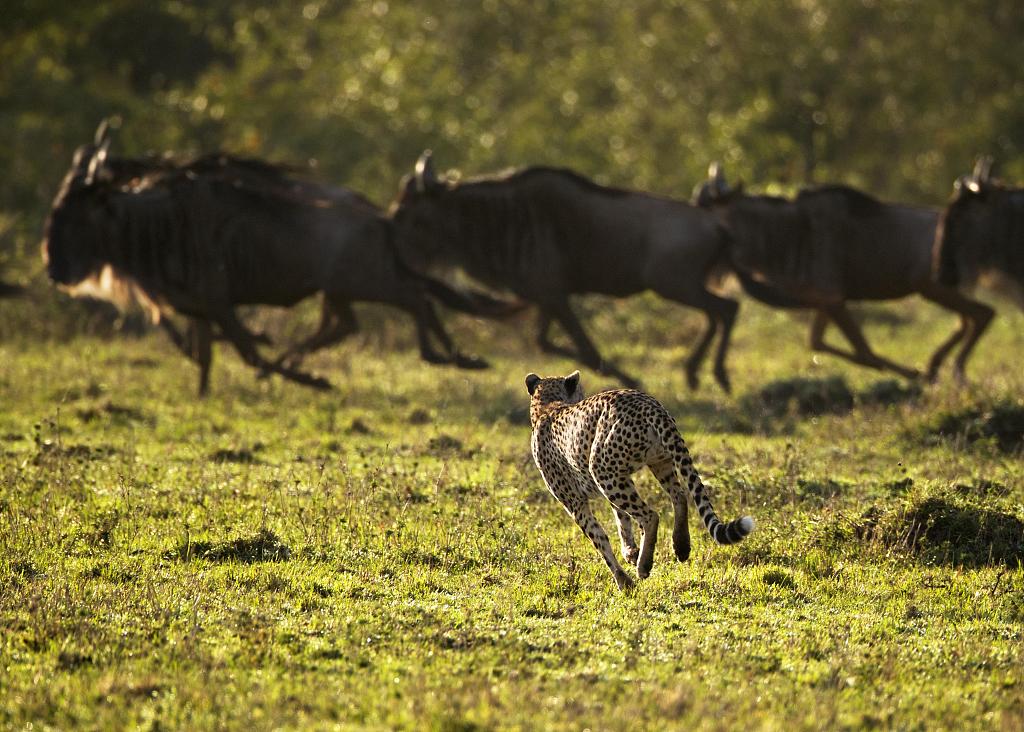 Cheetah is also an "enemy" of the wildebeest. /VCG

Cheetah is also an "enemy" of the wildebeest. /VCG 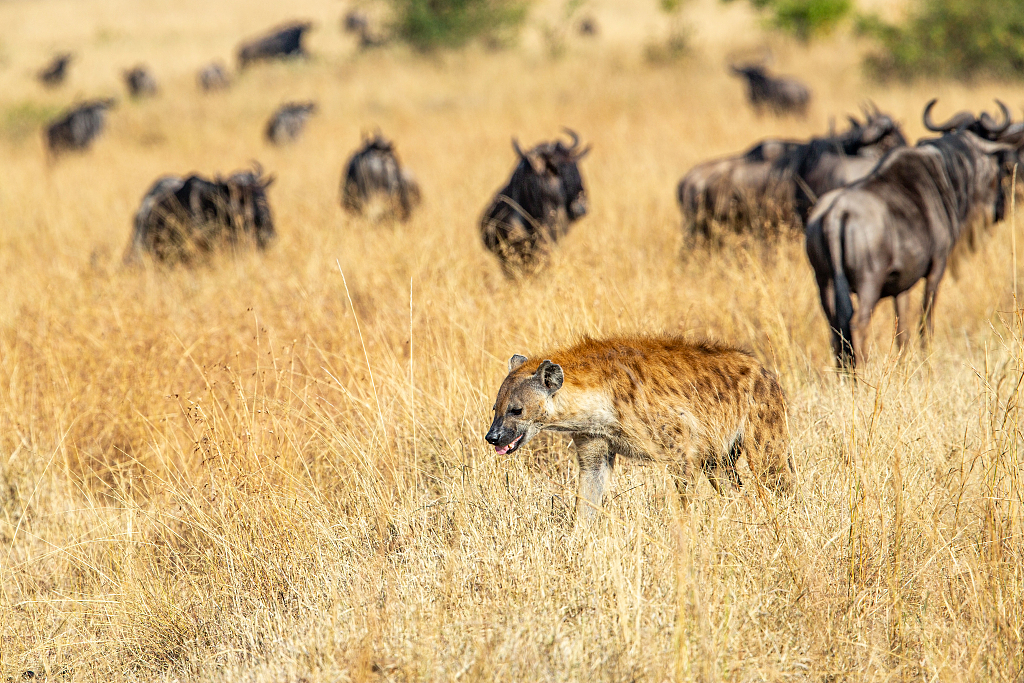 A hyena is wandering around the wildebeests. /VCG

A hyena is wandering around the wildebeests. /VCG

Wildebeest calves are also very strong-built. They can walk on their own just minutes after birth and within a few days, they can keep up with the herd. 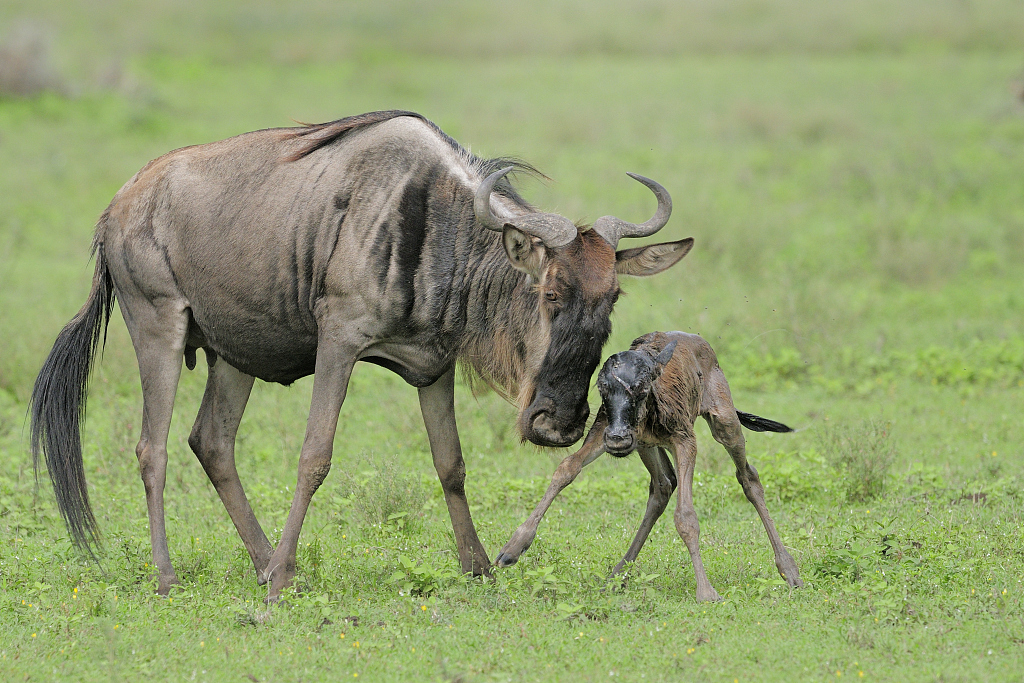 A wildebeest and its calf. /VCG

A wildebeest and its calf. /VCG 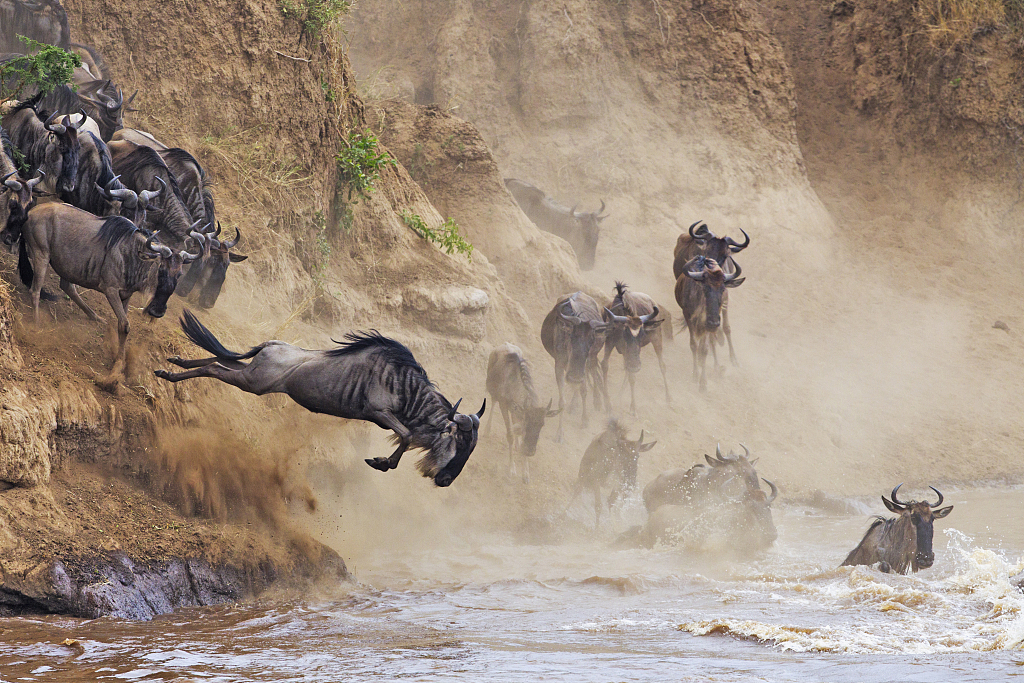 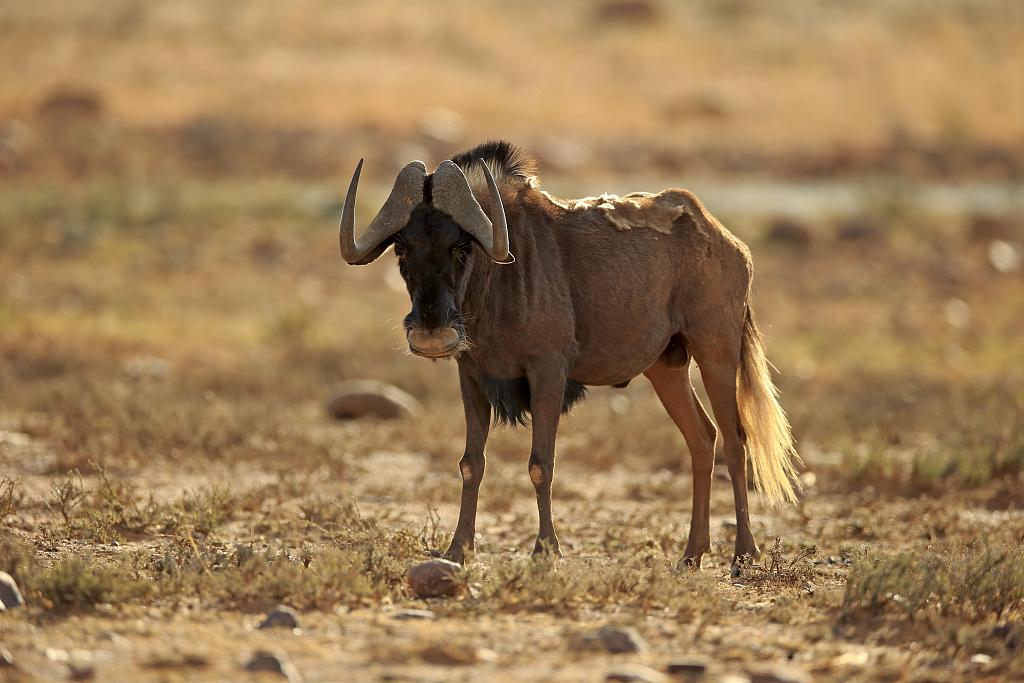 According to International Union for Conservation of Nature Red List, both blue and black wildebeests are listed as "Least Concern."