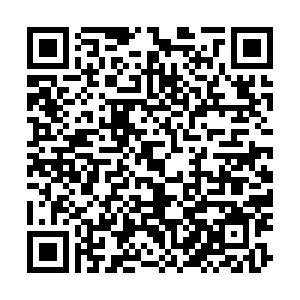 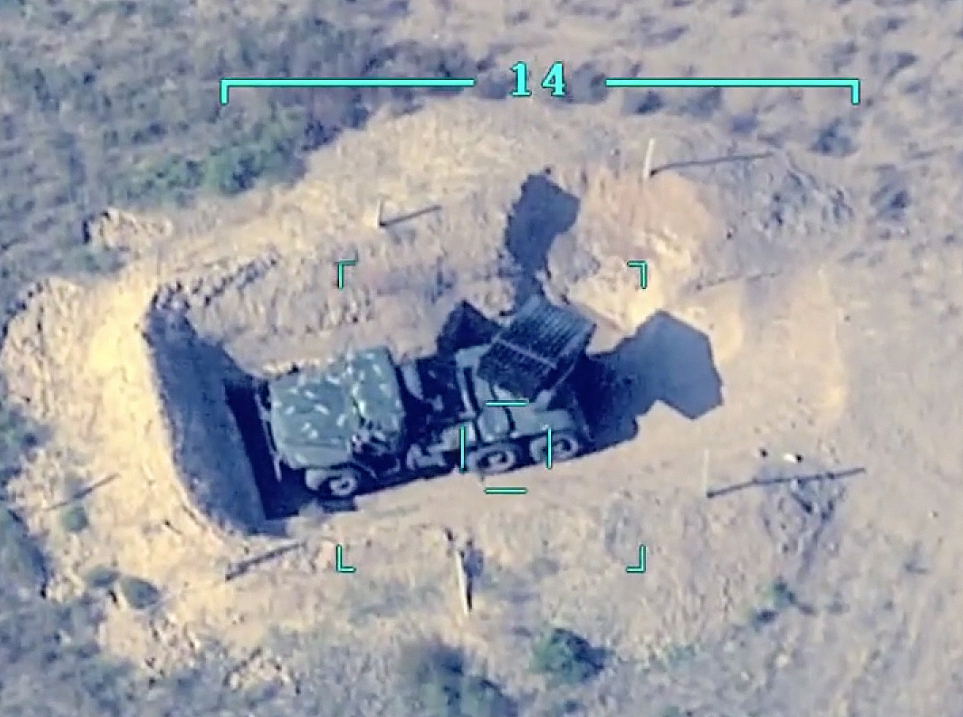 The video picture shows Azerbaijans are aiming at an Armenian military target. /VCG

The video picture shows Azerbaijans are aiming at an Armenian military target. /VCG

"The situation is much more serious (than previous clashes in 2016). It would be more appropriate to compare it with what happened in 1915, when more than 1.5 million Armenians were slaughtered during the first genocide of the 20th century," Pashinyan told Le Figaro newspaper in an interview published late on Thursday

"The Turkish state, which continues to deny the past, is once again venturing down a genocidal path," Pashinyan said.

The comments are likely to provoke Ankara. Turkey accepts that many Armenians living in the Ottoman Empire were killed in clashes with Ottoman forces during World War One, but contests the figures and denies that the killings were systematically orchestrated and constitute a genocide.

Pashinyan also claimed that Turkey had sent thousands of Syrian mercenaries to the region and Turkish military officers were directly involved in leading the Azeri offensive.

"The world must be aware of what is going on here," he said.

"Turkey's wish is to strengthen its role and influence in the South Caucasus. It's pursuing the dream of building an empire imitating the Sultanate and it is embarking on a path that could set the region ablaze.” 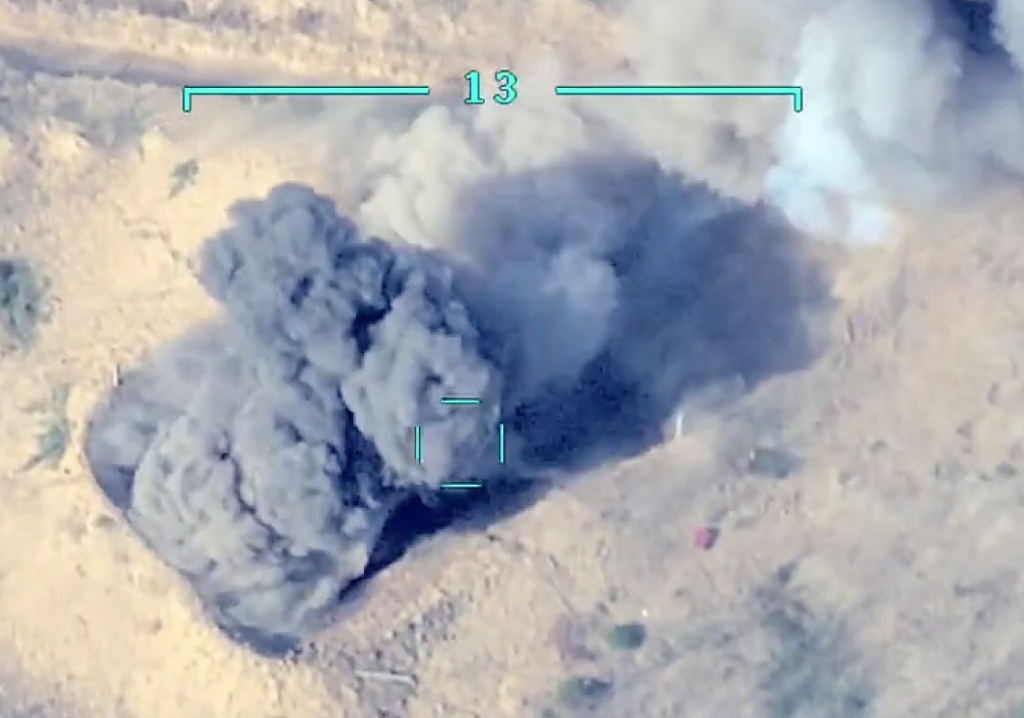 Conflicts over Nagorno-Karabakh region continued to a sixth day and dozens of people have been reported killed and hundreds wounded since Sunday.

The presidents of France, Russia and the United States called on Thursday for an immediate ceasefire between Azerbaijan and ethnic Armenian forces around Nagorno-Karabakh, but Turkey, an Azeri ally, said the three big powers should have no role in peace talks.

France, Russia and the United States are co-chairs of the Organization for Security and Cooperation in Europe's (OSCE) Minsk Group, set up in 1992 to mediate in the decades-old conflict over the mountainous enclave in the South Caucasus.

They urged the ex-Soviet republics of Armenia and Azerbaijan to "commit without delay to resuming substantive negotiations, in good faith and without preconditions" under what is called the Minsk process.

But in a speech to the Turkish parliament, President Tayyip Erdogan said he opposed their involvement.

"Given that the USA, Russia and France have neglected this problem for nearly 30 years, it is unacceptable that they are involved in a search for a ceasefire," Erdogan said.

He said a lasting ceasefire could be achieved only if "Armenian occupiers" withdrew from Nagorno-Karabakh. 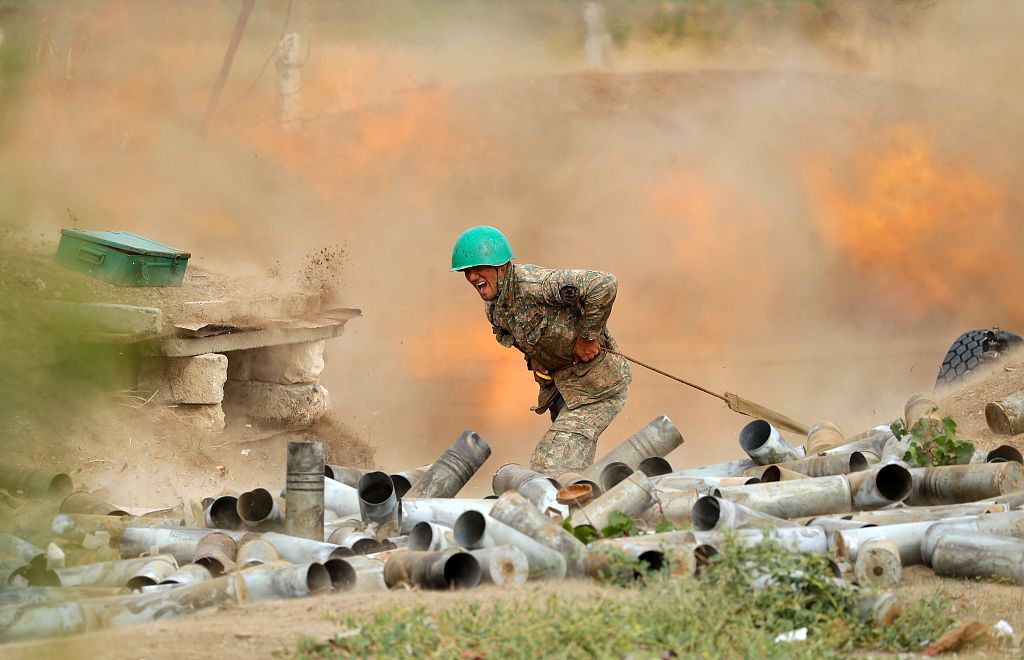 An Armenian soldier is firing an artillery at Azerbaijani military positions. /VCG

An Armenian soldier is firing an artillery at Azerbaijani military positions. /VCG

In the 1920s, Armenia and Azerbaijan both became part of the Soviet Union, which gave control over Nagorno-Karabakh, an ethnic-majority Armenian region to Azerbaijan authorities. So the region was officially part of Azerbaijan during the then Soviet Union.

When the Soviet Union fell apart in the 1980s, Nagorno-Karabakh's regional parliament officially voted to become part of Armenia after decades of calls of Armenians in the region. At the time, Azerbaijan sought to suppress the separatist movement backed by Armenia, which led to a war in 1988.

The war killed tens of thousands and displaced up to a million. After international mediation, including the OSCE, the two countries signed a ceasefire deal in 1994, without bringing a resolution.

After the deal, Nagorno-Karabakh remained part of Azerbaijan, but since then has mostly become a self-declared republic, run by ethnic Armenians and backed by the Armenian government.