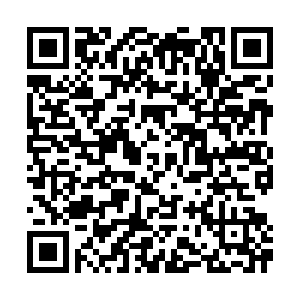 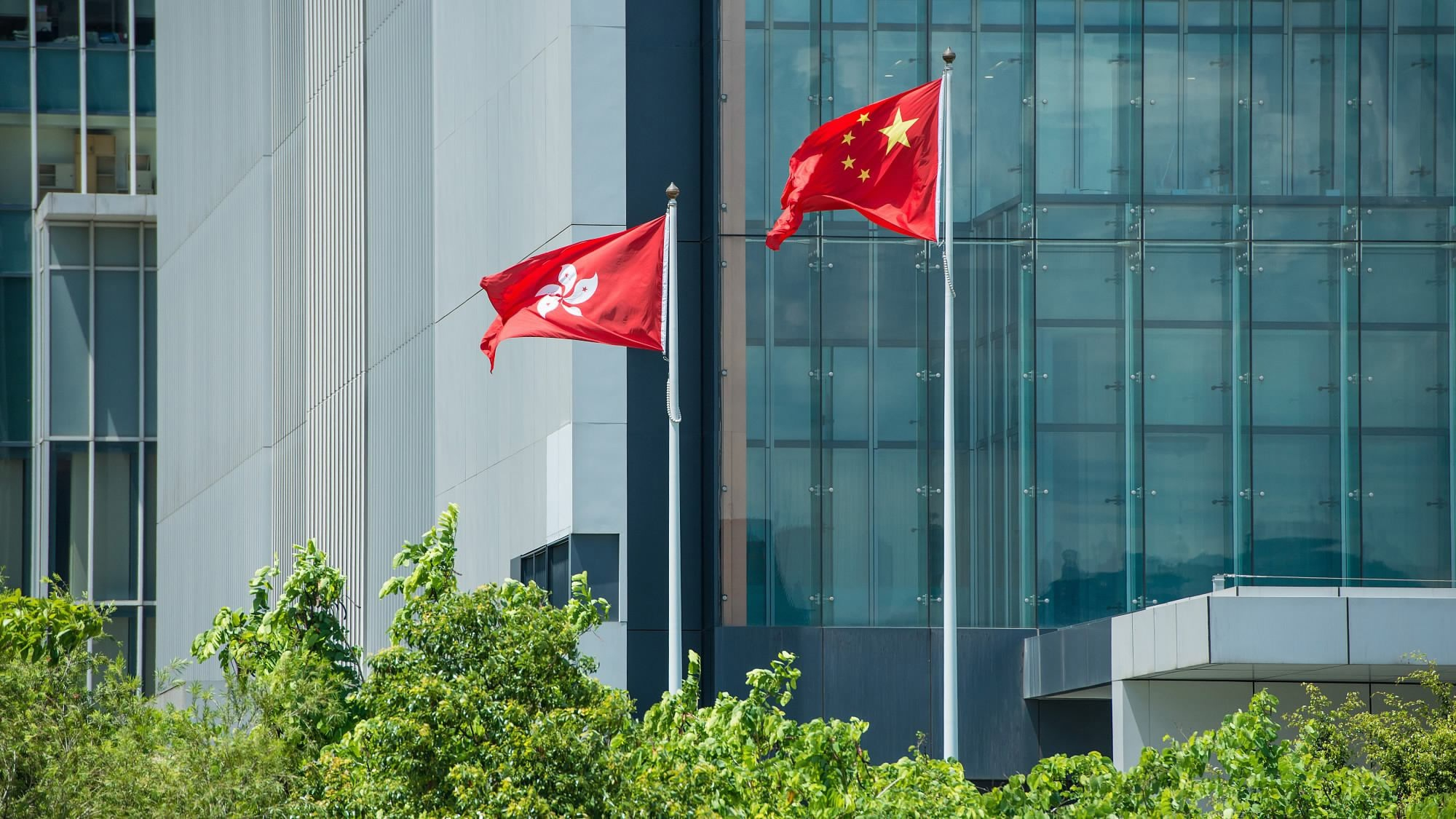 "A government spokesman said that the arrests were absolutely lawful and necessary to maintain law and order in society and protect the life and property of Hong Kong residents. It was much regretted that senior U.S. officials continued to adopt 'double standards' in expressing utterly irresponsible remarks on law enforcement actions in the HKSAR," the statement said.

"The HKSAR government solemnly reminded the U.S. government that the HKSAR is an inalienable part of the People's Republic of China (PRC), a local administrative region which enjoys a high degree of autonomy and comes directly under the Central People's Government. Hong Kong affairs are internal matters of the PRC. Foreign governments should stop scaremongering and interfering in any form in Hong Kong's affairs."

Police said at least 86 people were arrested on Thursday and 74 of them, including four district councilors, were held on suspicion of participating in an unauthorized assembly in Causeway Bay.

U.S. State Department spokeswoman Morgan Ortagus on Saturday accused HKSAR authorities of "continued use of law enforcement" to undermine "the rights to assembly and free expression."

The HKSAR government statement said the freedoms of procession and assembly are not absolute and might be subject to restrictions as prescribed by law in the interests of public order, public safety and others' interests. 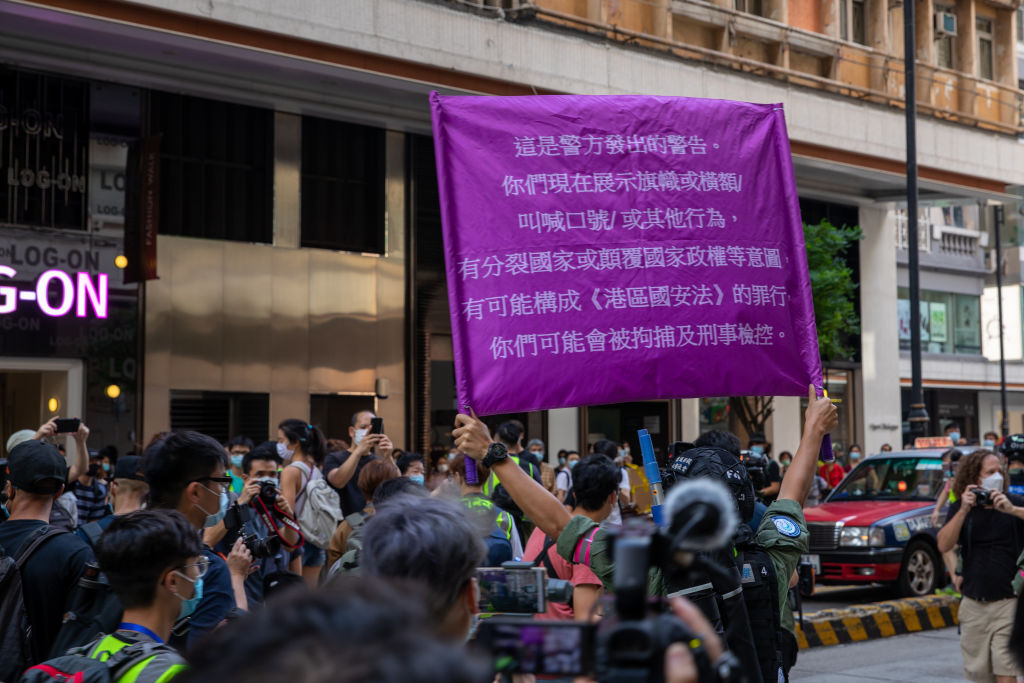 Meanwhile, the Office of the Commissioner of the Chinese Foreign Ministry in the HKSAR on Sunday expressed strong dissatisfaction with and firm opposition to Washington's slandering and smearing of the law enforcement actions by the Hong Kong police.

The office demanded that the U.S. side immediately stop interfering in Hong Kong affairs under the guise of human rights and the rule of law.

A spokesperson for the commissioner's office said that on October 1, some people participated in unauthorized assemblies and possessed offensive weapons in Hong Kong, and were suspected of violating the law of the HKSAR. The Hong Kong police arrested those people according to law, which was reasonable, legal and necessary.

Laws in Hong Kong, including the HKSAR Basic Law, fully protect the rights and freedom of Hong Kong residents. However, the exercise of any individual's rights cannot harm the rights of others and the public interest, let alone override the law, said the spokesperson.

Hong Kong is a society with the rule of law in which everyone is equal before the law, everyone must abide by the law and no one should be above the law, said the spokesperson, adding that law enforcement by the Hong Kong police is to safeguard the rule of law, maintain social order and protect the lives and property of Hong Kong residents. 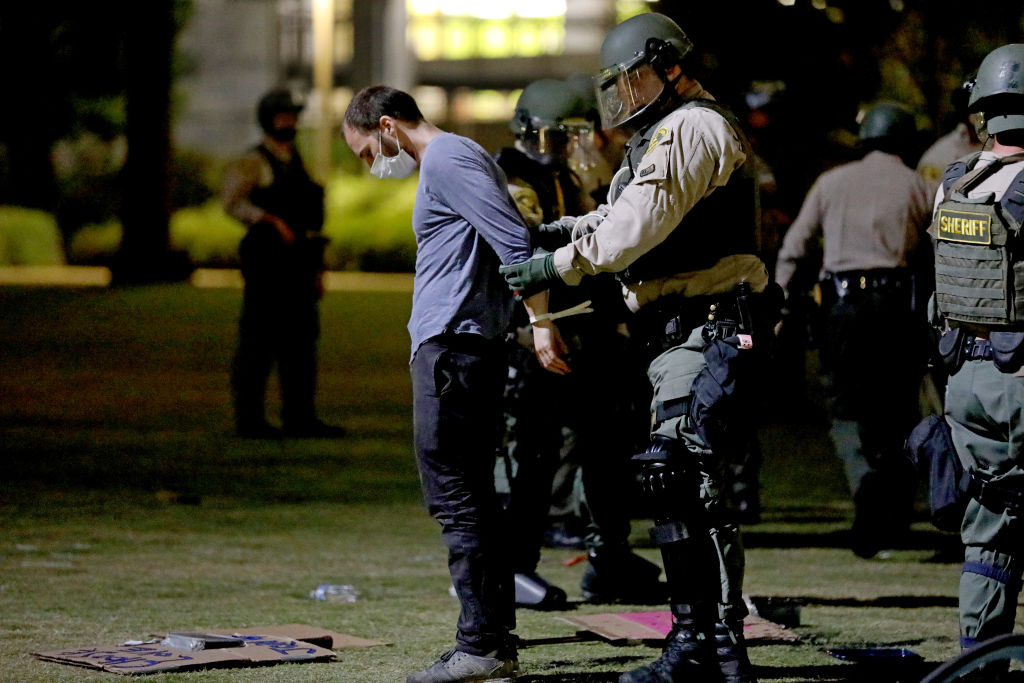 A protester is arrested by the Los Angeles County Sheriff's Department for violation of curfew at Grand Park in Los Angeles, California, U.S., June 3, 2020. /Getty Images

A protester is arrested by the Los Angeles County Sheriff's Department for violation of curfew at Grand Park in Los Angeles, California, U.S., June 3, 2020. /Getty Images

The spokesperson said that the United States itself often arrests people participating in illegal assemblies. According to media reports, police in California's Los Angeles, Arizona's Yavapai County and Oregon's Portland arrested people involved in illegal assemblies in May, August and September this year.

The U.S. side turned a blind eye to these facts, ignored the illegal acts taking place in Hong Kong, slandered and smeared the Hong Kong police's law enforcement actions under the guise of safeguarding freedom of assembly and speech, put pressure on the HKSAR government, and denigrated that the Chinese government undermined the "One Country, Two Systems," the spokesperson said, adding that this is an utter "double standard" and a typical case of a thief crying "stop thief."

The purpose of the U.S. side is to cover up and condone the illegal actions by the anti-China rioters in Hong Kong, in an attempt to destabilize Hong Kong and undermine "One Country, Two Systems," the spokesperson said.