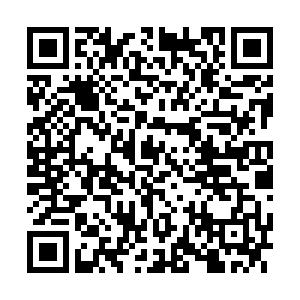 Russian President Vladimir Putin said Turkey should be among countries involved in talks to end fighting in Nagorno-Karabakh, as Azerbaijan and Armenia again accused each other on Thursday of shelling civilians in and around the mountain enclave.

Putin said that "many countries, including Turkey and a host of European states" should work together to find consensus. Turkey, an ally of Azerbaijan, has demanded a greater say in talks.

"The first stage is to stop the fighting, stop the killing," Putin said.

With more peace talks scheduled for Geneva this week, the EU said an escalation in the month-old conflict was "unacceptable" and called for a lasting settlement after the collapse of three ceasefires.

The OSCE Minsk Group, which has been leading peace talks, is due to meet the Armenian and Azeri foreign ministers in Geneva on Friday, although neither has confirmed its minister will travel. 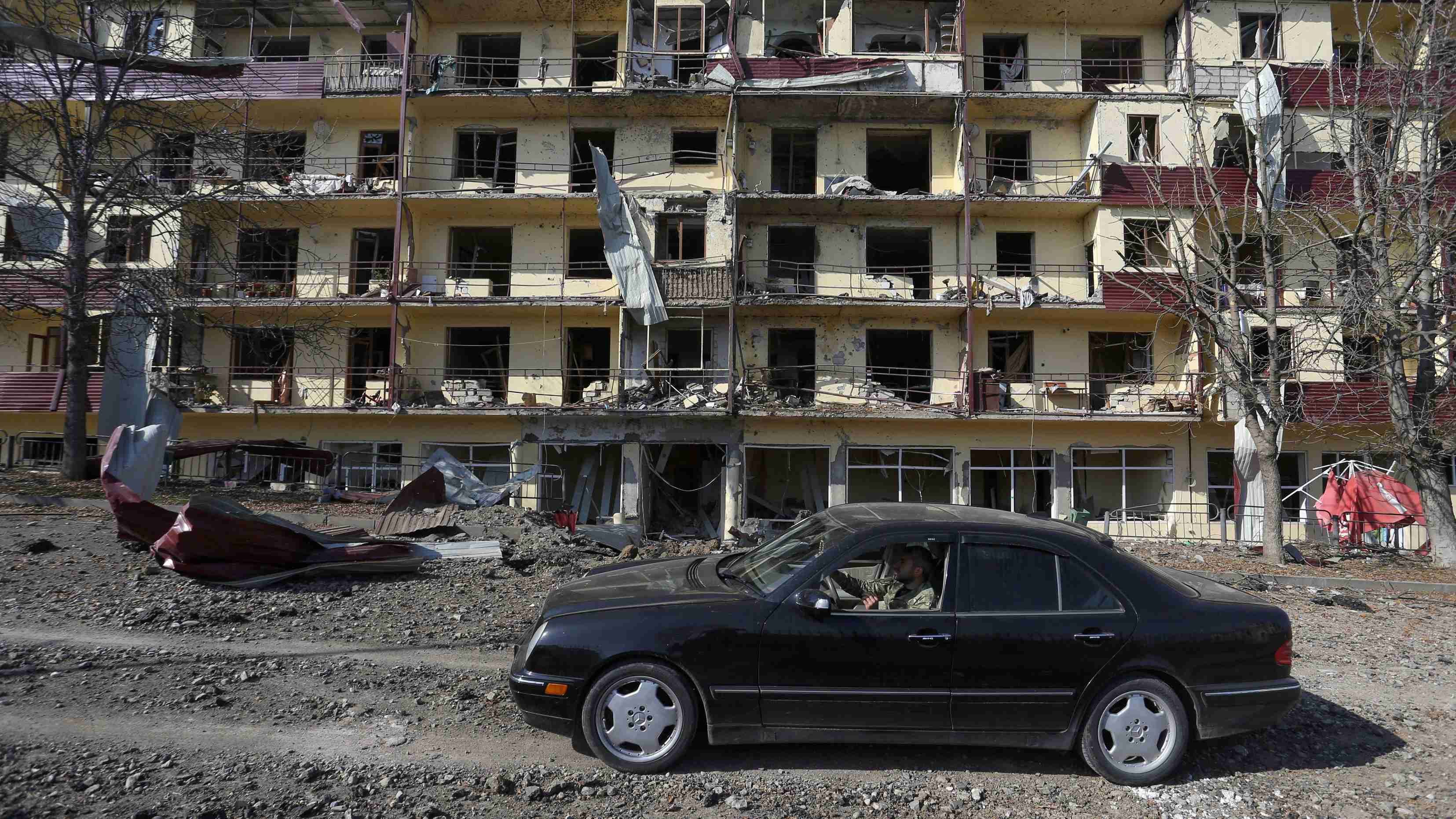 A man drives a car past a damaged building following recent shelling in the town of Shushi, October 29, 2020. /AP

A man drives a car past a damaged building following recent shelling in the town of Shushi, October 29, 2020. /AP

On Thursday, the warring sides continued to accuse each other of violating the ceasefire, and disclosed civilian casualties.

Azerbaijan's defense ministry said in a statement that Armenia had fired at its military units and civilian settlements along the frontline and that the Azeri settlements of Terter and Gornaboy to the north of Nagorno-Karabakh had been shelled.

Azeri presidential aide Hikmet Hajiyev said on Twitter that a civilian was killed when an Armenian missile hit his home in Tap, a village north of Nagorno-Karabakh, a claim that was denied by Armenia.

Armenia's foreign ministry said Stepanakert and the towns of Shushi and Martakert had been "under continuous attack". The human rights ombudsman in Nagorno-Karabakh said more than a dozen shells had fallen on Stepanakert, a day after a maternity hospital there was struck. Two civilians were wounded.

Nagorno-Karabakh authorities said the region had suffered 51 more casualties, taking its military death toll to 1,116. Azerbaijan has not disclosed its military casualties. 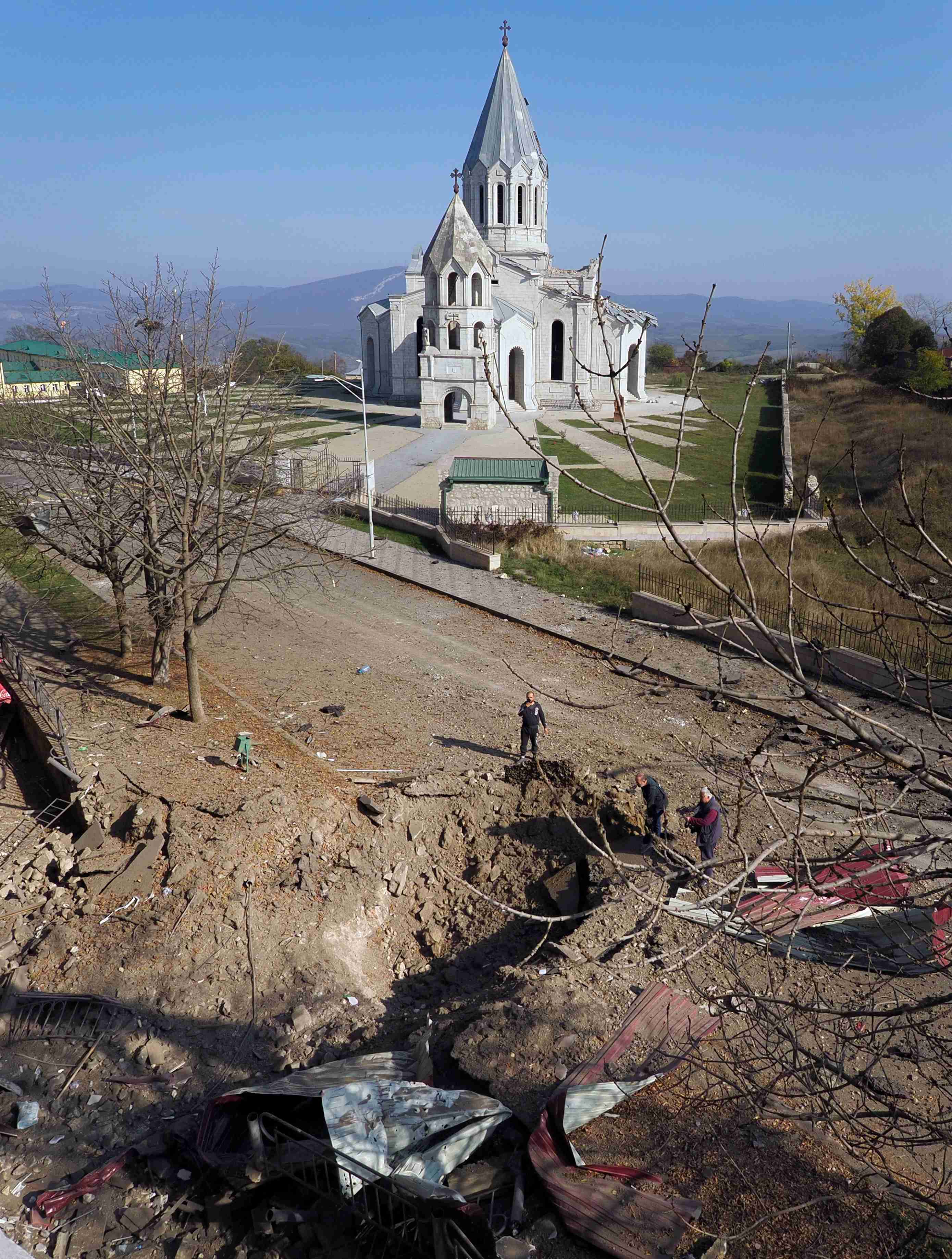 Men examine a bomb crater near the Holy Savior Cathedral, after shelling by Azerbaijan's forces in Shushi, outside Stepanakert, October 29, 2020. /AP

Men examine a bomb crater near the Holy Savior Cathedral, after shelling by Azerbaijan's forces in Shushi, outside Stepanakert, October 29, 2020. /AP