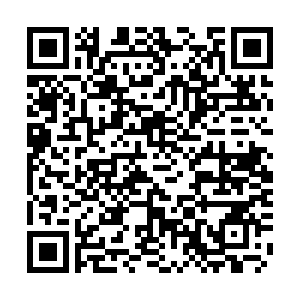 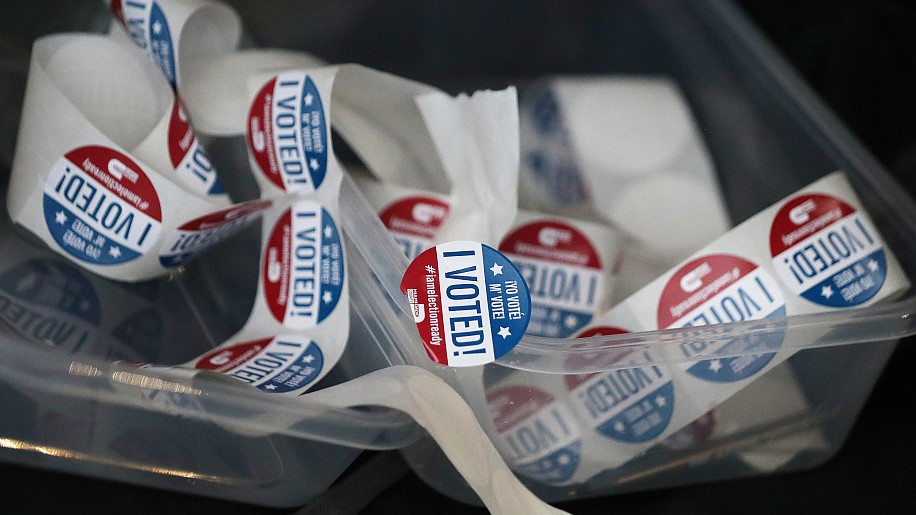 Voting in person, voting early, sending a mail-in ballot or popping it in a ballot drop-box – the different ways in which Americans can vote in this U.S. election have been amply covered. But what has it been like for U.S. voters in China?

Kara Schroeder, a U.S. expat living in the southern city of Guangzhou, said this was her first time voting from abroad. She registered to vote online and requested to receive her instructions and ballot via email. Once she had printed and filled everything out, she sent her ballot back with the help of the embassy. "I don't think it was complicated, I think that you just think it's complicated," she told CGTN.

Luis Martinez, a writer based in Beijing since 2012, had the benefit of having voted from abroad before. He requested his ballot in September, received a link to it via email and, having filled his ballot and signed the confidentiality oath, scanned it and sent it back via fax.

For others, however, it was less straightforward. Just over half of U.S. states accept overseas ballots via fax, email or online upload, according to Vote from Abroad, a non-partisan online platform. The others require ballots to be mailed.

And the envelope situation proved a particular headache for overseas voters: not only do most states require two envelopes – a blank one containing the ballot and another one used for mailing – some require a signature or affidavit on the back.

One U.S. voter in Shenzhen, who preferred not to be named, said he traveled to nearby Guangzhou to collect special envelopes from the U.S. consulate for himself and several others.

Jason Yep, an English teacher in Beijing, said he got away with signing and sticking the voter's affidavit on an ordinary envelope. But the next hurdle came when he missed the diplomatic pouch: the U.S. embassy had offered this service to ensure ballots reached the U.S. quickly, but the deadline for submitting them was September 30. 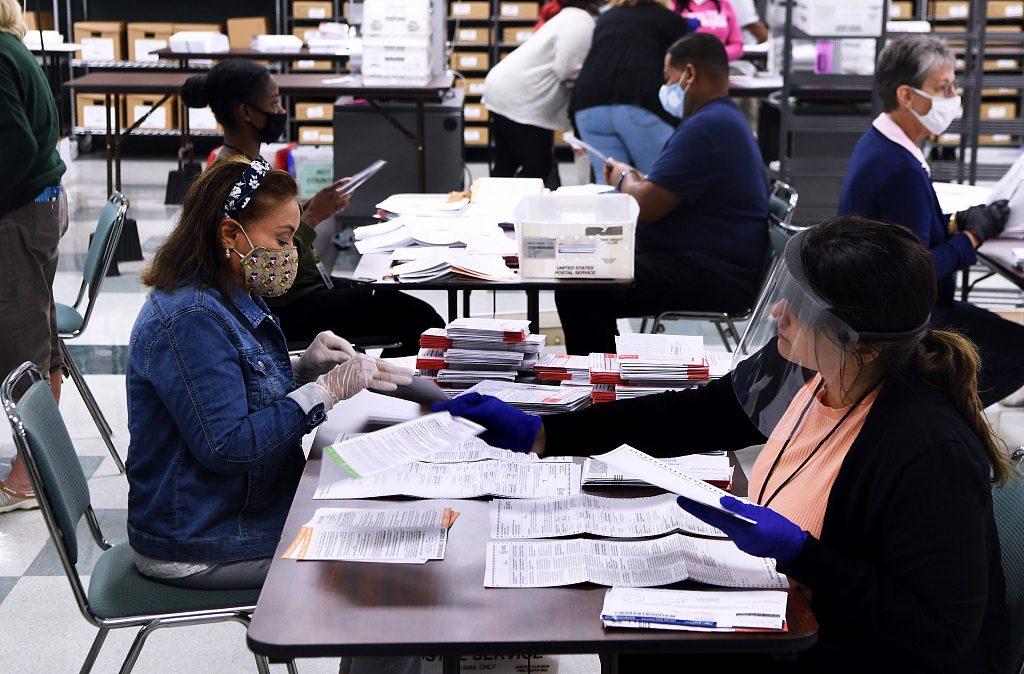 In the end, Yep was able to fax his ballot instead, since this was an option his state allowed. But rules differ from place to place and had he come from another state, his ballot may not have made it on time. "That's where it's not fair, it's either everyone can fax or no one can fax," he noted.

In the months leading up to the election, the U.S. embassy in China posted information about voting abroad on its website and held town halls to explain the process.

But voters also helped each other out informally. Vote from Abroad organized voter registration events in Guangzhou and elsewhere to drum up participation. The U.S. voter in Shenzhen who, like Schroeder and Yep, was voting from abroad for the first time, created a WeChat group to share information and facilitate the mailing process.

"I set up the group to help people," he told CGTN. "I picked up 20 ballots and 20 return envelopes, met people at random places to show them how to do it. I even brushed up on some states' rules to make sure they voted correctly." In the end, a group of them sent their ballots together via express service, and someone in the U.S. then dropped them in the mail to be forwarded to respective election offices.

Still, the voter said he was "pretty disappointed in the process," describing it as "difficult." "Three friends never got (a ballot), even after requesting multiple times and following up." 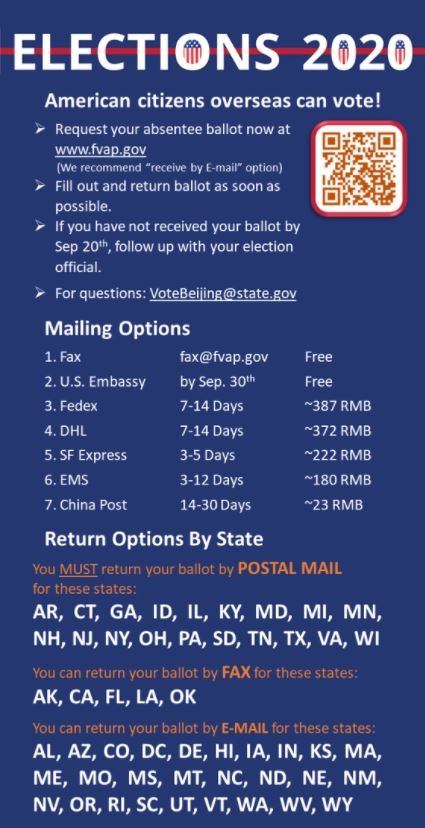 And even though the embassy provided assistance, "if you aren't in a city with a consulate it's tough."

Schroeder also noted that while she found voting from abroad relatively straightforward, "it was more the anxiety of making sure that my ballot made it on time and that I did everything correctly."

Any questions? Google it!

On November 3, U.S. voters are not only picking their next president but, in many states and counties, also senators, judges and school district board members.

Yep recalled that back home, the county would mail out a comprehensive election packet with information about the candidates and proposals on the ballot. But nowadays with the internet, voters can get this information even while halfway around the globe in China, he noted.

Schroeder agreed: "I always find it funny when people ask questions like 'How do I get my ballot, how do I do this, how do I do that' when everything you can Google. I feel like, if people don't really know how to find the information, it's because they're lazy." "There's websites for every state ... It's really not that hard," she added.

Martinez also noted that his ballot included "all the state proposals, referendums, I just had to understand those issues and based on my political philosophy, vote accordingly."

Still, simplifying the process or offering more support would be helpful, voters agreed.

About 3 million U.S. eligible voters live overseas – a fraction of them in China. But in 2016, only 7 percent of them voted in the presidential election, compared to 72 percent of eligible voters stateside, according to the Federal Voting Assistance Program's (FVAP) Overseas Citizen Population Survey. 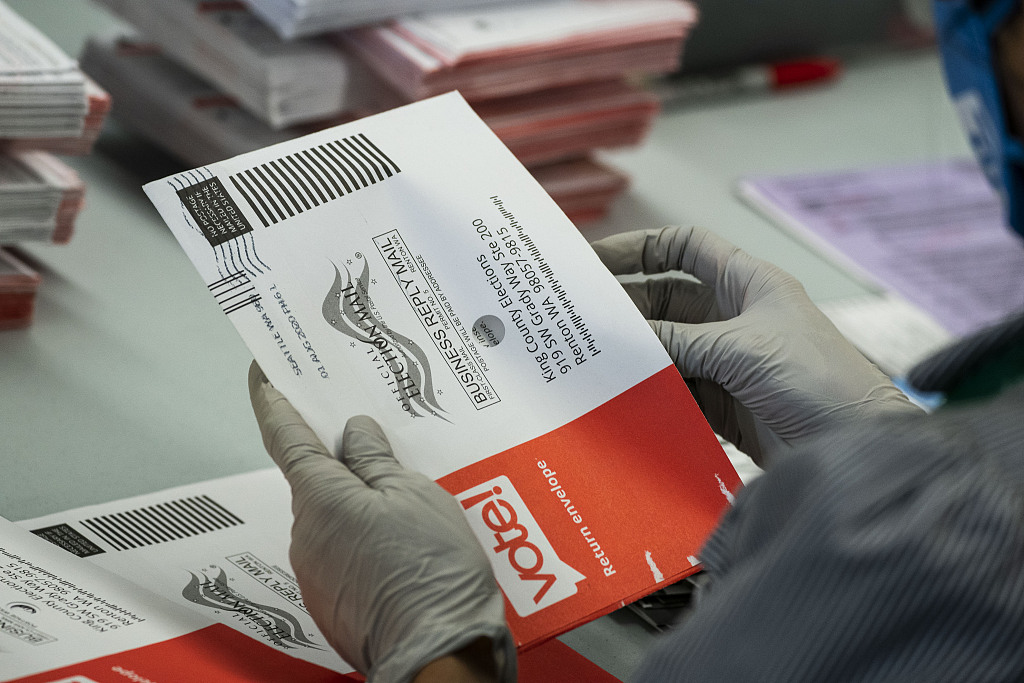 "There's a lot of online stuff, you have to print it out and fill it out, and especially in a place like China, where it might be difficult with the language, it steers people away from voting," noted Yep. If it was possible to vote directly at the embassy, it would makes things easier, he added.

One thing that none of the U.S. voters CGTN spoke to feared was mail-in ballot fraud, despite repeated warnings from President Donald Trump.

Martinez and Schroeder said they were both able to track their ballot online and had received confirmation that their vote had been counted.

"(I have) no concern about fraud," the U.S. voter in Shenzhen added, "but I am deeply concerned about ballots being rejected and/or not making it to the election commission." He said his ballot had been received "but I worry for others ... others say their vote hasn't been counted yet or it's not in the system."

Ahead of an election that observers have called one of the most important in years, voters said they felt extra motivation to cast their ballot this year, despite the sometimes laborious and time-consuming process.

"With COVID-19, there was a really big reason to vote," noted Yep.

She said she did not vote in 2016 "because to be honest, I don't think anybody really thought Trump was going to win ... and also because I did not know the process of voting abroad in 2016, nor did I research it, which I should have."

"I hope everyone votes!!!" was her parting shot.