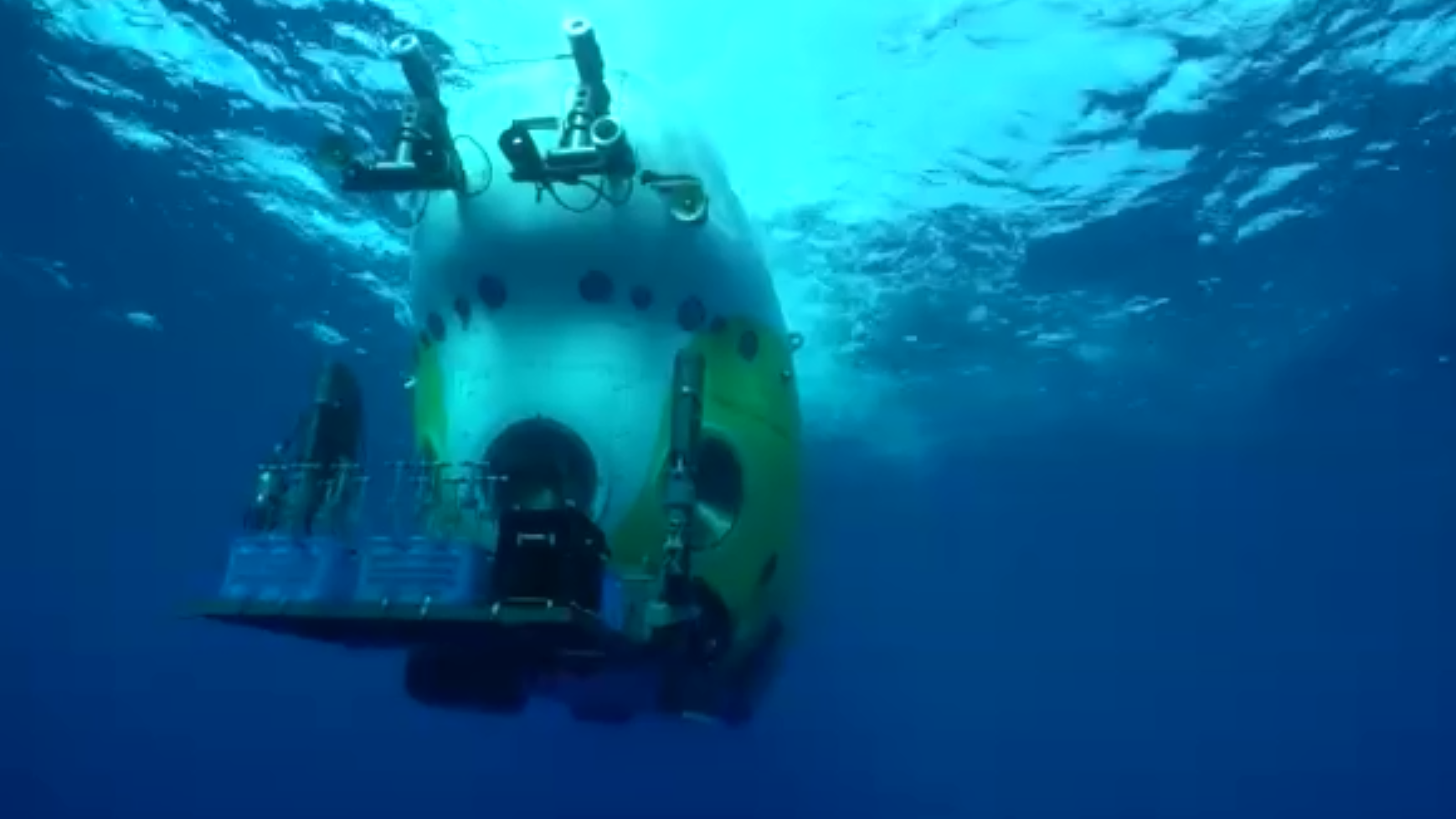 Humans have been to the deepest place in ocean before – many times actually.

But we at CGTN will present you the world's first live-streamed diving into the Challenger Deep, as China's Fendouzhe (Striver) submersible reaching down to more than 10,000m deep in the ocean.

The Fendouzhe project was launched back in 2016, with some of the best submersible engineers in China involved.

On papers, the Fendouzhe is more capable than its predecessor Shenhai Yongshi (Deep Sea Warrior) as it is able to carry three researchers to more than 10,000 meters (more than 32,800 feet) deep. 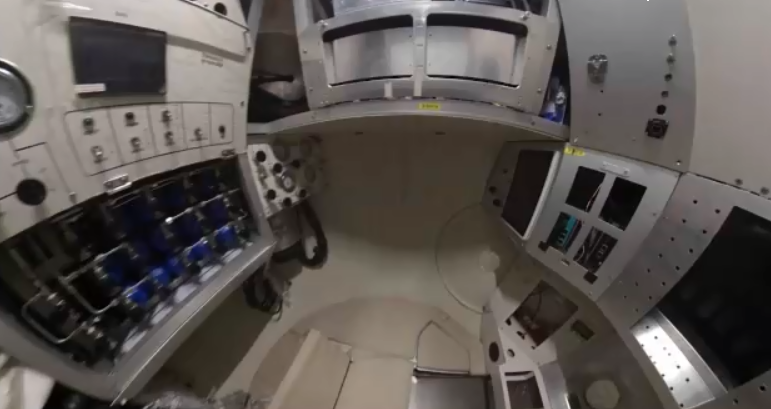 The inside of the Fendouzhe, where three researchers will guide the submersible to more than 10,000 meters deep in ocean. /CCTV

The inside of the Fendouzhe, where three researchers will guide the submersible to more than 10,000 meters deep in ocean. /CCTV

The deepest spot in the Mariana Trench – the Challenger Deep – is roughly 10,900 meters deep. The spot is also the lowest place of the solid Earth surface, in contrary to Mount Qomolangma (Everest) which is the highest spot.

Find out how the submersible got its name.

Check out more about the Shenhai Yongshi and deep sea exploration.

The shapes of the two submersibles are not quite the same. The new submersible has a big forehead made of buoyancy modules.

"There are so many heavy devices on the front of the submersible," head engineer of Fendouzhe, Liu Shuai, told CCTV. "We added some buoyancy modules to balance it." 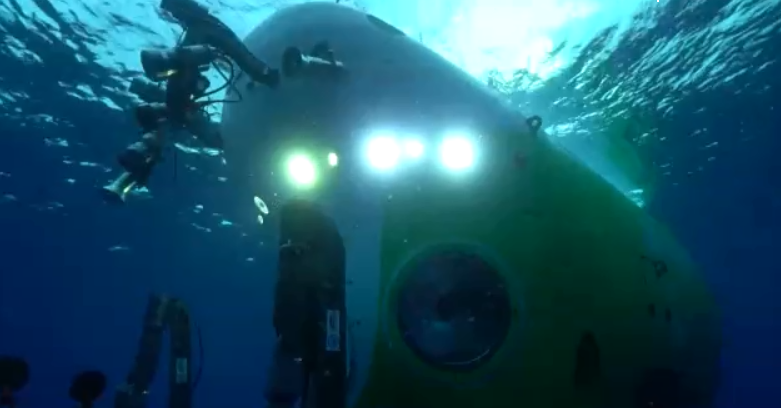 The front of the Fendouzhe submersible. /CCTV

The front of the Fendouzhe submersible. /CCTV

As the Fendouzhe is diving so deep into the ocean, many technologies we use on the surface won't work anymore. So, engineers have to find workarounds to conduct the diving mission.

It can be pretty hard to even locate the submersible.

Most smartphone users are quite familiar with satellite navigation technology like Beidou or GPS. But deep under the water, there's no way to receive a satellite signal.

The engineers ended up using soundwaves in the same way that whales do. The submersible "calls out" in the water and the mothership "hears" the sound – water blocks electric waves but not sonic vibrations. The ship then uses that sound to determine where the submersible should be – just like how you know I'm calling you from behind. 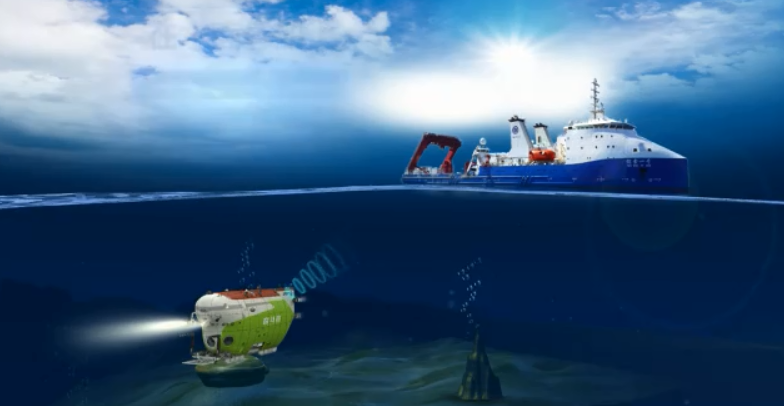 An illustration of how the Fendouzhe communicate with the mothership. /CCTV

An illustration of how the Fendouzhe communicate with the mothership. /CCTV

Soundwaves have frequencies just like electric waves so they can also be used to transmit information. It's basically a sound based WiFi system. It can even transfer images in addition to location data.

When engineers know where the submersible is, they begin the process to find out what's surrounding it. If you dive more than 1,000 meters into the ocean, everything will go dark because sunlight is blocked by the water.

The "eyes" of the Fendouzhe are also soundwave-related devices, specifically they are sonar. This means they not only call out in the water but also listen to the echo, to determine if there's something nearby. 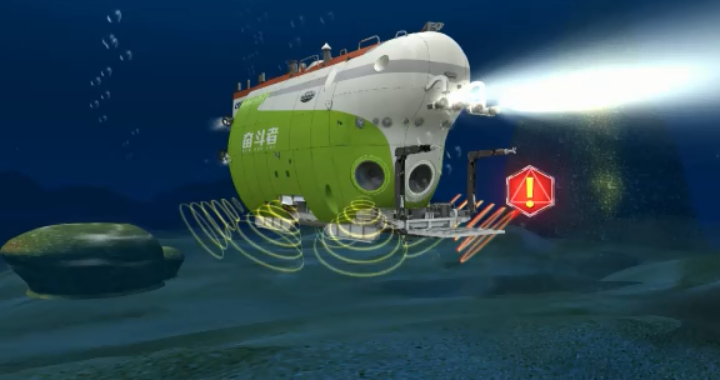 An illustration of how sonars on Fendouzhe functions. /CCTV

An illustration of how sonars on Fendouzhe functions. /CCTV

Some sonar sensors are installed on the front of Fendouzhe to look for obstacles in its path. Others are on the sides to draw a map of the seabed.

There's other equipment on the submersible to read the speed of it and help it remain balanced. And all these devices are controlled by computers on the mothership.