Graphics: How is economic recovery going in G20 countries post-COVID-19?
By Chen Yurong 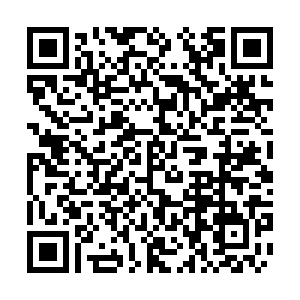 Leaders of the world's 20 major nations are set to discuss the most-concerned global socio-economic issues in the upcoming G20 Summit in Riyadh, Saudi Arabia, on November 21 and 22.

The two-day summit under the theme of "Realizing Opportunities of the 21st Century for All" will present global leaders a chance to reflect on what has been achieved since they pledged to "spare no effort" to battle the COVID-19 pandemic in a virtual summit on March 26 and explore more ways to continue to revive the global economy.

The Riyadh Summit will "set the foundations for a more inclusive, more resilient, and more sustainable recovery from the COVID-19 crisis," the G20 said in a statement on Monday.

The pandemic, which hammered the global economy with the worst recession since the 1930s, has now affected 56 million people globally, with over 1.3 million fatalities and more than 35 million recoveries, according to the latest tally from Johns Hopkins University.

Most of the G20 countries saw the worst economic contraction in the second quarter this year, with India experienced the biggest slump. The U.S. also recorded an annualized contraction of 31.7 percent during the April-June quarter, marking the sharpest quarterly drop on record. 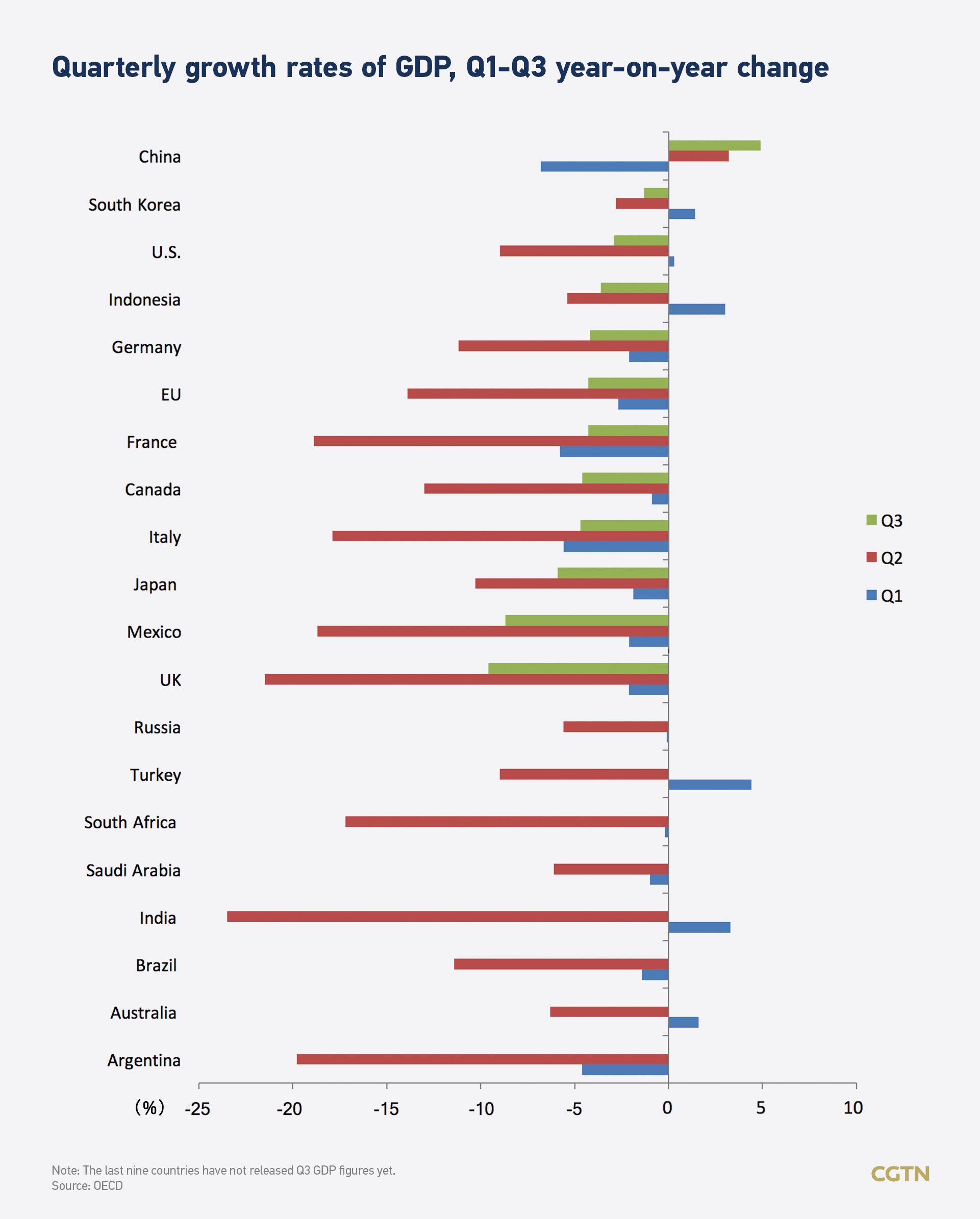 In the March summit, major G20 members said they spent an unprecedented total of $5 trillion, equivalent to 7.4 percent of 2019 G20 countries' GDP, in "counteracting the social, economic, and financial impacts of the pandemic."

The number has been added since then as the extent of the global economy fallout deepened. As of June 29, G20 countries had announced $7.6 trillion in fiscal support, representing 11.2 percent of 2019 G20 GDP, according to the estimation of the Center for Strategic and International Studies. 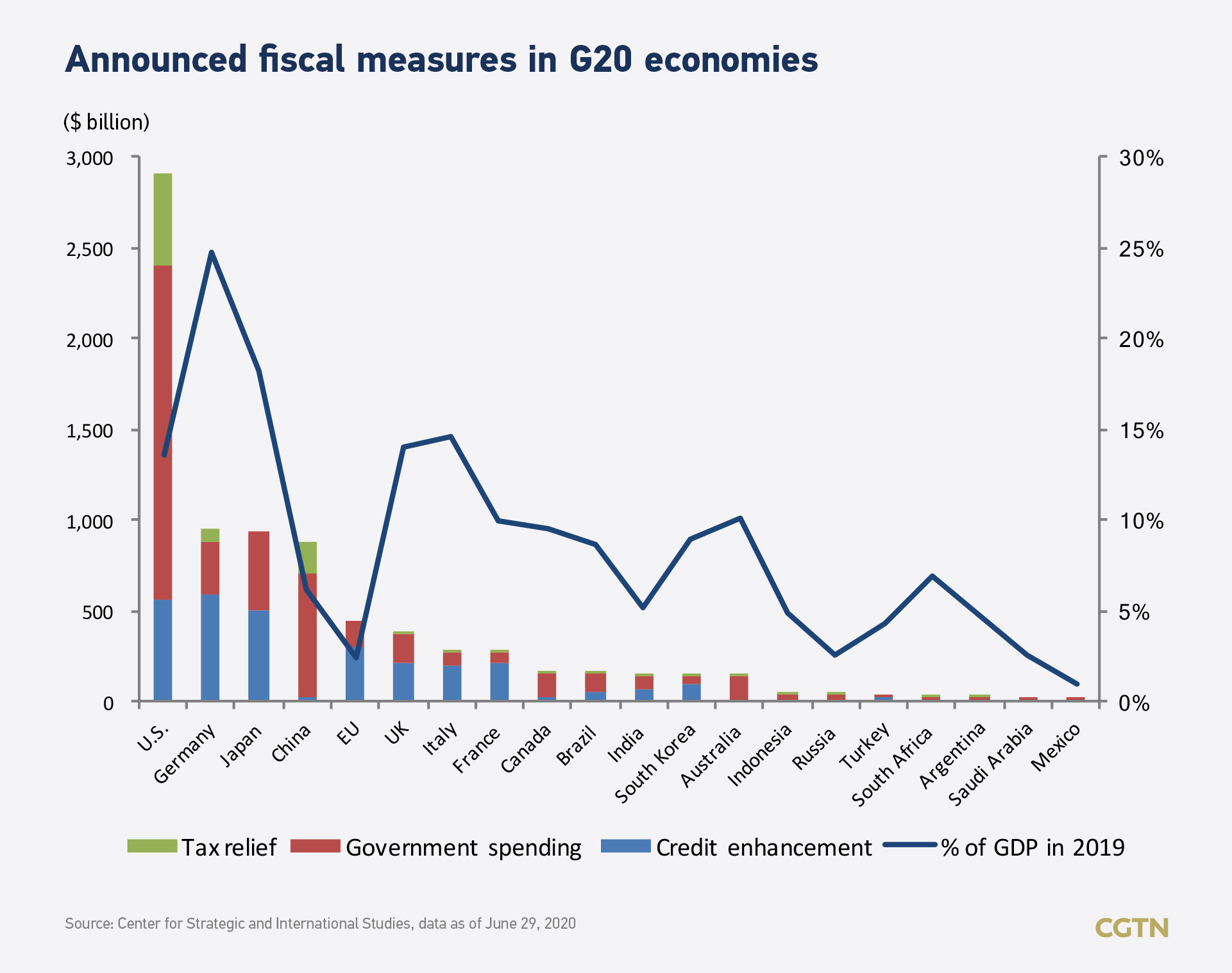 In addition to fiscal stimulus, in April, G20 members reached Debt Suspension Service Initiative in an effort to help the world's poorest countries, agreeing to a time-bound suspension of debt repayments from 44 countries, making $14 billion in funds - supposed to service debt - available to fighting the pandemic.

With the large-scale fiscal stimulus being implemented, 12 of the G20 countries picked up in the third quarter, facing uneven recovery. Among those announced, France's third-quarter economy rebounded the most by 18.2 percent on a quarterly-basis, though its economy still contracted compared to the same period last year.

The global economy is projected to contract by 4.4 percent in 2020, which is an upward revision from an estimate of -4.9 percent made in June (which has now also been revised to -5.2 percent due to a new methodology, according to the latest estimation by the International Monetary Fund (IMF). 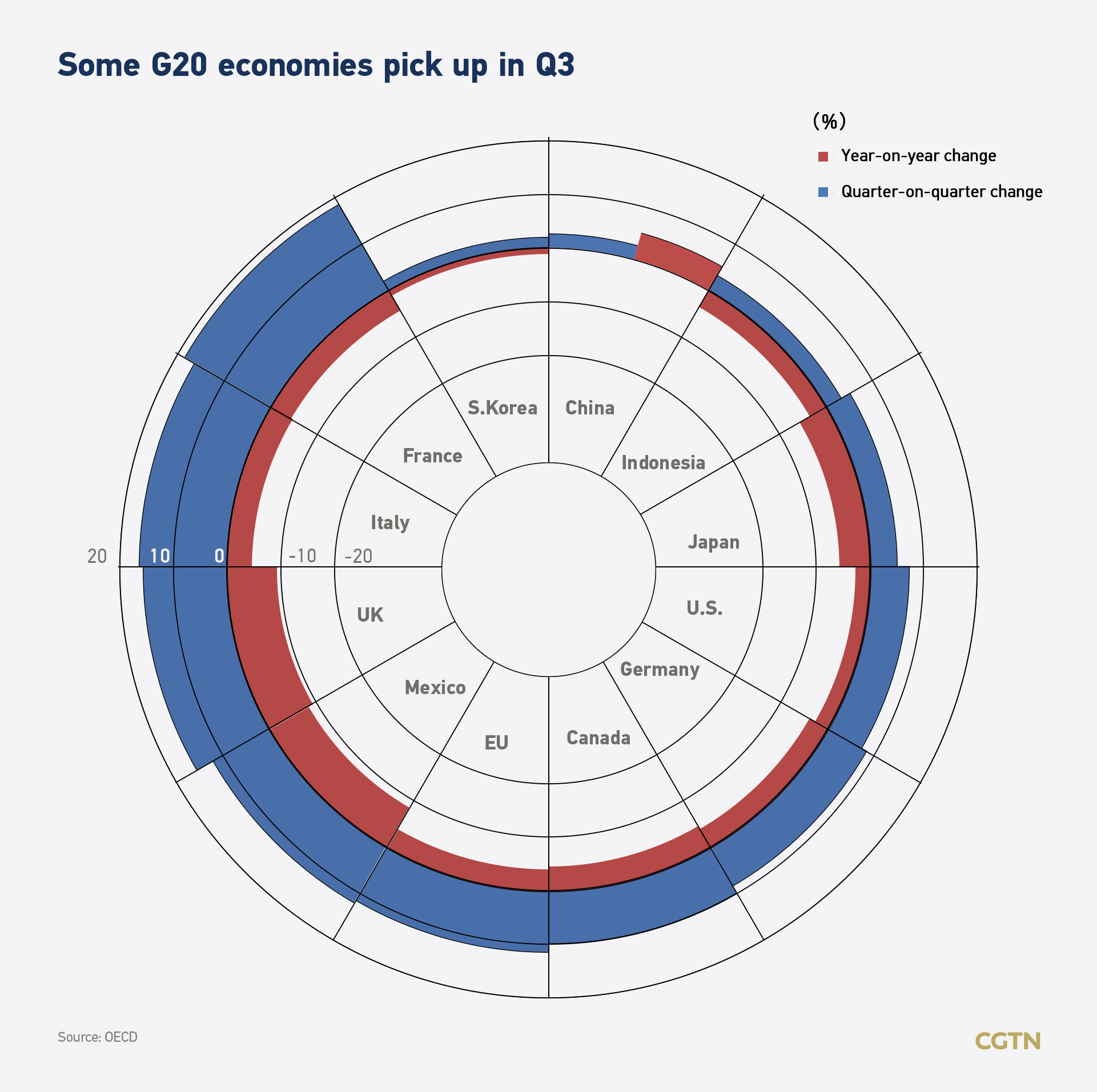 Among the largest economies in G20, China's economy has picked up earlier than others after the first quarter collapse of a 6.8-percent contraction, thanks to its bolstering anti-pandemic works. Its economy maintained positive growth in the second and third quarter year on year, increased by 3.2 and 4.9 percent, respectively.

Authorities said the GDP jump shows the country's economy is steadily recovering lost ground. Since the pandemic, China has focused on the policies to help alleviate the plight of enterprises and stimulate the vitality of market players focus on small, medium- and micro-enterprises and individual businesses so as to stabilize employment while continuing to promote tax and fee reductions, improve the business environment, and stimulate hundreds of millions of market players' vitality.

Thanks to the boost, the first nine months of 2020 now amount to a slight 0.7-percent year-on-year growth rate. The IMF has predicted that China would be the only country to see positive growth this year.

"We are confident that China's economy is to achieve positive growth this year," Chinese Premier Li Keqiang reaffirmed that China's growth is on positive track at the China-ASEAN Business and Investment Summit last week, calling for cooperation among countries for economic recovery.