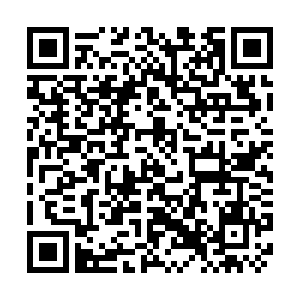 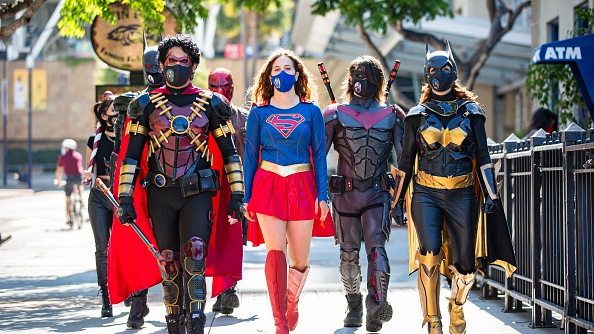 Superheroes move aside! The true heroes of 2020 are ... couch potatoes. With a second wave of COVID-19 engulfing much of Europe, the German government launched a humorous new ad campaign last weekend set in the future and featuring elderly people "reminiscing" about their sacrifices in the winter of 2020.

"The eyes of the entire country were on us ... An invisible danger threatened everything we believed in and the fate of the country was suddenly in our hands," one character remembers as heroic music plays in the background. "So we summoned all our courage and did what was expected of us. The only right thing. We did ... nothing, absolutely nothing! We were as lazy as raccoons!"

As a flashback shows his younger self lazing on the couch, watching TV and eating takeout, he recalls: "Day and night we sat on our bums at home and fought the spread of the coronavirus... That was our destiny. That is how we became heroes, in the corona winter of 2020."

The message to young and old in combating COVID-19: "Be a hero too and stay at home."

Fraud at the polls! 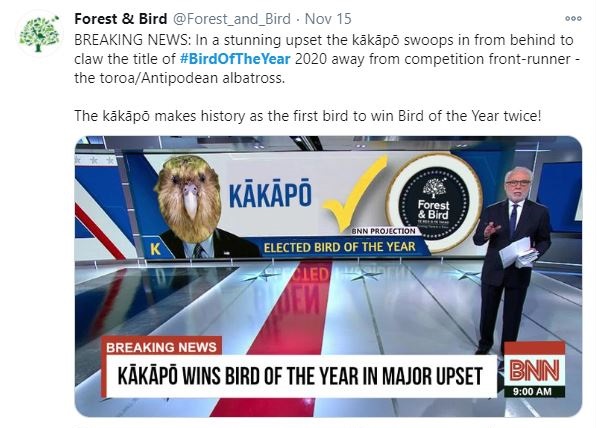 An attempt to rig a crucial election earlier this month was thwarted when sharp-eyed watchers found 1,500 ballots were cast by the same person ... for New Zealand's bird of the year.

The votes, all sent from the same email address, bumped the kiwi pukupuku, or little-spotted kiwi, to the top of the bird leaderboard in the annual competition, in which ordinary people can take part. They were quickly discovered however and discarded.

"It's lucky we spotted this little kiwi trying to sneak in an extra 1,500 votes under the cover of darkness!" Bird of the Year spokesperson Laura Keown said in a statement. "But they'll have to play by the rules like all of the other birds to win the competition."

While a valid contender – the flightless bird is the smallest of the kiwi family and is endangered – Keown urged its supporters to campaign fairly.

Public broadcaster RNZ noted that this is not the first time the competition – which raises awareness about New Zealand's endangered birds and has become a national event, with even embassies and NGOs getting in on the game – has been marred by a voting scandal.

In the end, the kakapo, a green parrot with an owl-like face, won the most votes and was crowned Bird of the Year, prompting an avalanche of memes and election humour online, many of them drawing comparisons with the U.S. presidential election. 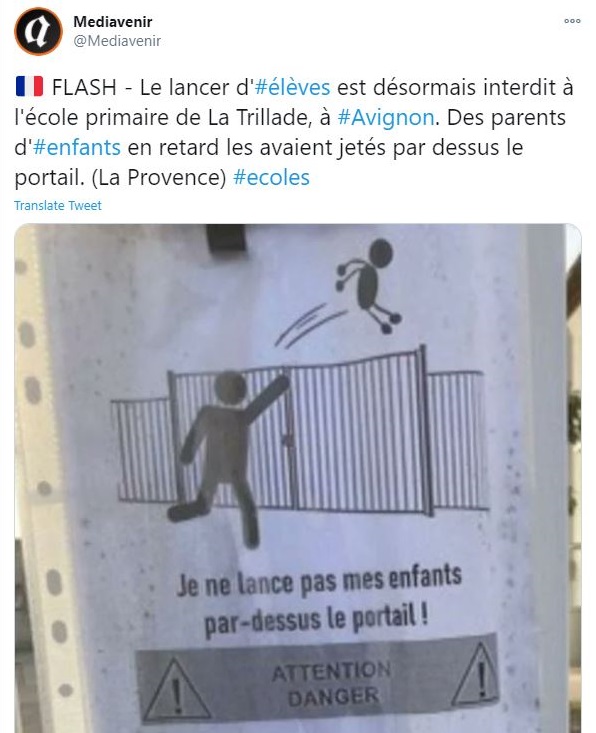 A news tweet featuring a picture of the school's sign with the words “I do not throw my children over the gate!” /@mediavenir

A news tweet featuring a picture of the school's sign with the words “I do not throw my children over the gate!” /@mediavenir

A primary school in the southeastern French city of Avignon has grabbed headlines for its unusual instructions to parents dropping their child off for class: please do not throw your child over the gate!

The La Trillade school put up signs at the start of the school year in September, also advising parents who are late to return at 10 a.m. or 3 p.m. when the gates are again open.

And it was not merely for laughs. "It hasn't happened that often, but given it has happened, we preferred to take preemptive measures," school director Sanaa Meziane told the local La Provence newspaper.

"Some parents who arrived after the bell literally tossed their children over," she added.

No pupils seem to have been injured in the process, but for now the signs are staying up – "as a kind of reminder," said Meziane.

Fly me to the moon 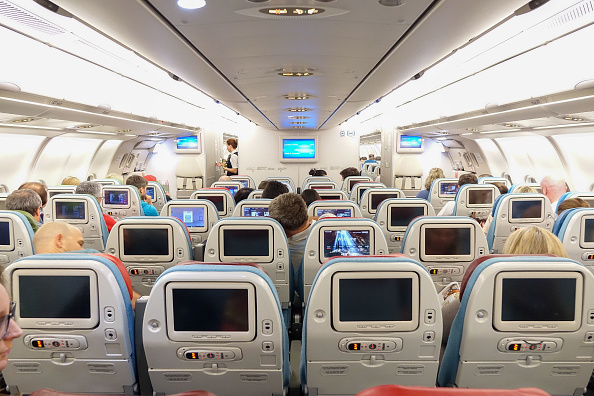 A place for a romantic first date? The view inside a Turkish Airlines plane pre-COVID-19 pandemic. /Getty

A place for a romantic first date? The view inside a Turkish Airlines plane pre-COVID-19 pandemic. /Getty

There have been flights to nowhere, flights over famous sights, spiritual flights and flights that don't even take off. Now the Taiwan region's EVA Air, which has been breaking new ground on no-destination travel throughout the COVID-19 pandemic, has launched a new idea: speed dating in the sky.

Singles can book a flight on Christmas Day, New Year's Eve and New Year's Day in the hope of finding love in the sky like a character in a romantic movie, Chiang Tsung-wei, one of the people behind the idea, told CNN.

Each flight will last 3 hours, with another 2-hour date on the ground. A ticket costs about $295 and there is strict application criteria for the 40 passengers – 20 men and 20 women – including being a Taiwan resident and university graduate between 24 and 38 years old.

But the idea has clearly taken off: the Christmas flight is reportedly already sold out.

How far would you go for good Wifi?

COVID-19 forced many Russian universities to switch to online classes earlier this month, but for one 21-year-old student, this posed a new problem: how to access these classes from his remote village in Siberia. The solution he found: climbing up a tree.

Alexei Dudoladov is a student at Omsk Institute of Water Transport but in a TikTok video that has since gone viral, the popular blogger said his 2G home internet connection was too slow to attend online classes, forcing him to new heights, literally. Only from his perch can he talk to his professors and show that he is following classes.

With temperatures already below freezing however, this is not sustainable, he said in the video, which has already been viewed 1.9 million times, appealing to authorities to improve internet coverage around the country.

"Why can people from the city use the internet in their apartments while villagers can only do so from highways, rooftops and trees!" Dudoladov wrote on Instagram.