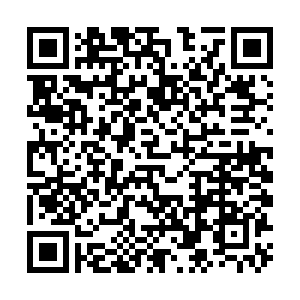 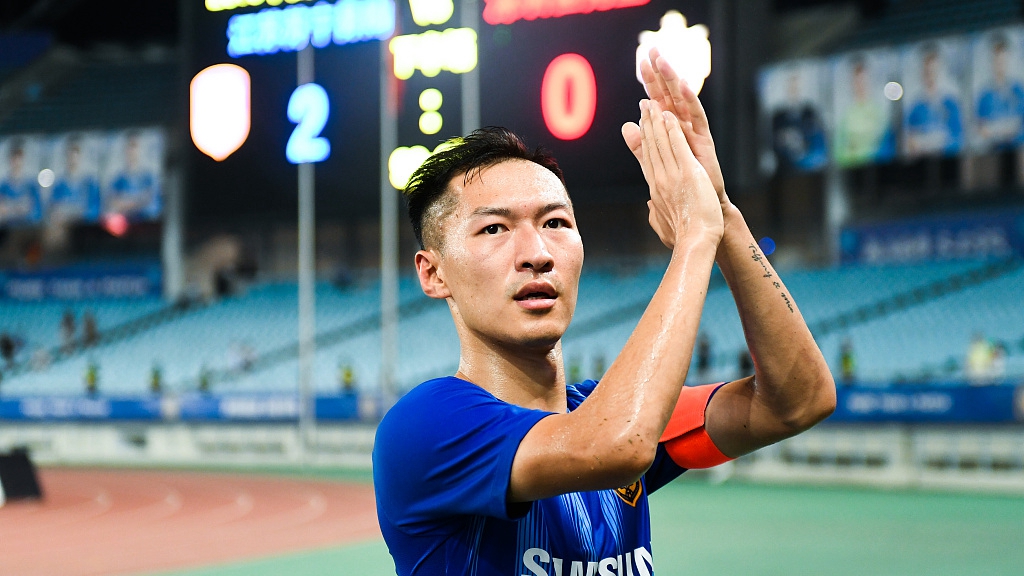 "I'd be delighted if I could play in the Premier League because I really relish its intense physicality," enthused Wu Xi when he was quizzed on his favorite European destination if given the chance. "But I would possibly struggle to cope with the demands considering my slim stature," added the star with self-mocking charm.

The Jiangsu Suning talisman has made for engaging company during an exclusive interview that has gone on longer than either of us intended. His magnetic voice resonates around the room as he reflects upon a memorable 2020. And in a pampered industry packed with its fair share of well-heeled prima donnas, he is disarmingly candid and humble.

Wu had ample reason to gloat over his extraordinary achievements. He played an instrumental role in leading Jiangsu to their first Chinese Super League (CSL) title in the recently-concluded 2020 campaign. And on Sunday, he reached yet another milestone after being crowned the Chinese Footballer of the Year, capping off a perfect season. 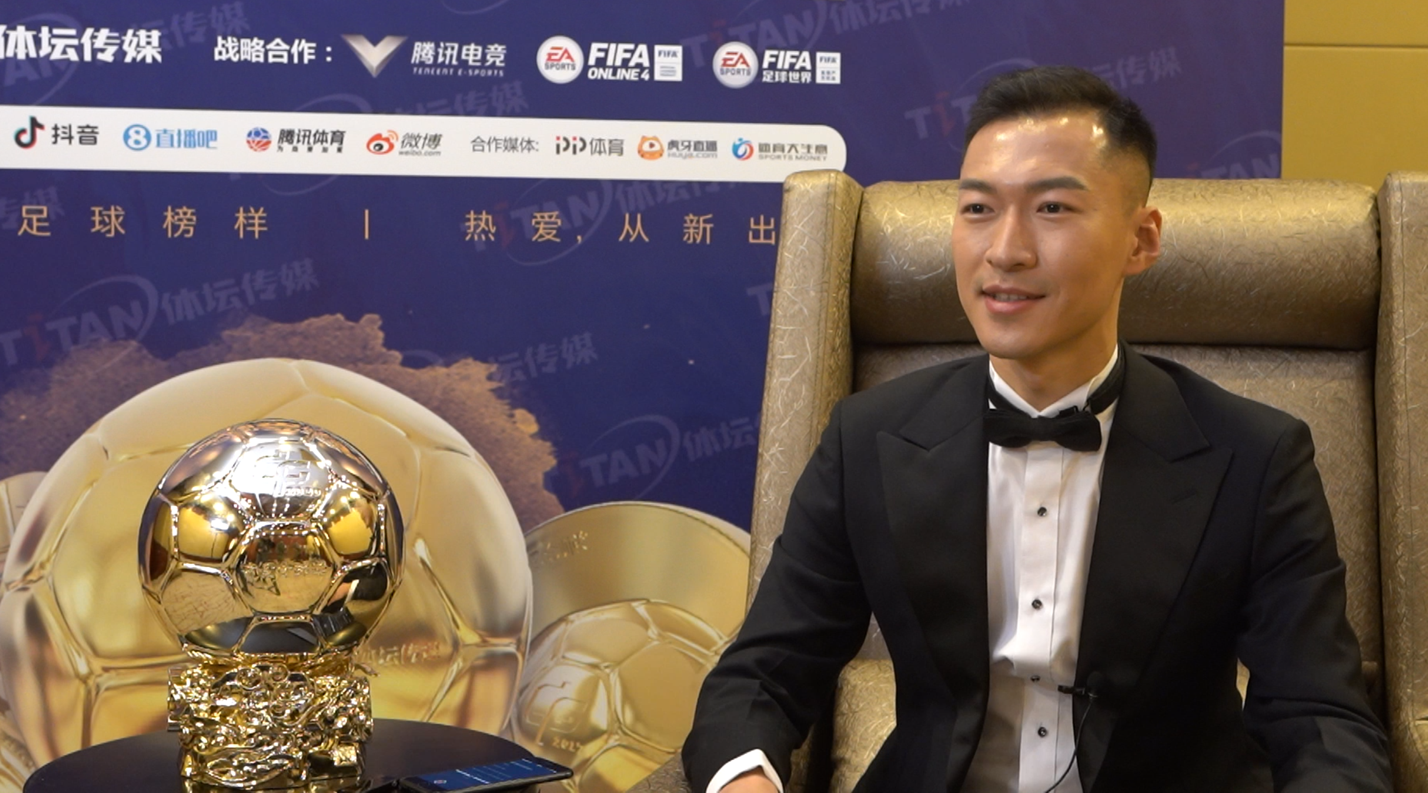 "To be honest, I wasn't expecting it," Wu told CGTN after landing the coveted award. "I also didn't predict us to win the league. Never did I think too much about it because so many title rivals are stronger than us. The title is a testament to the hard work and dedication of the entire team."

Wu's story could be seen as an uplifting tale of fulfilled potential, application paying off, endurance and tenacity.

Unlike many of his peers who could boast a sporting heritage, Wu was born in a family of educators. His passion for football was seeded by his father, a college teacher whose off days and weekends were filled with watching and playing the beautiful game.

Wu showed flashes of his huge talent during his time at an amateur athletic school in Shijiazhuang, capital of north China's Hebei Province. He assumed a calm and authoritative pose in every outing, strutting the pitch with an air of confidence and assurance that belied his tender age and lack of experience. His pure love of football was evident in every intuitive touch. 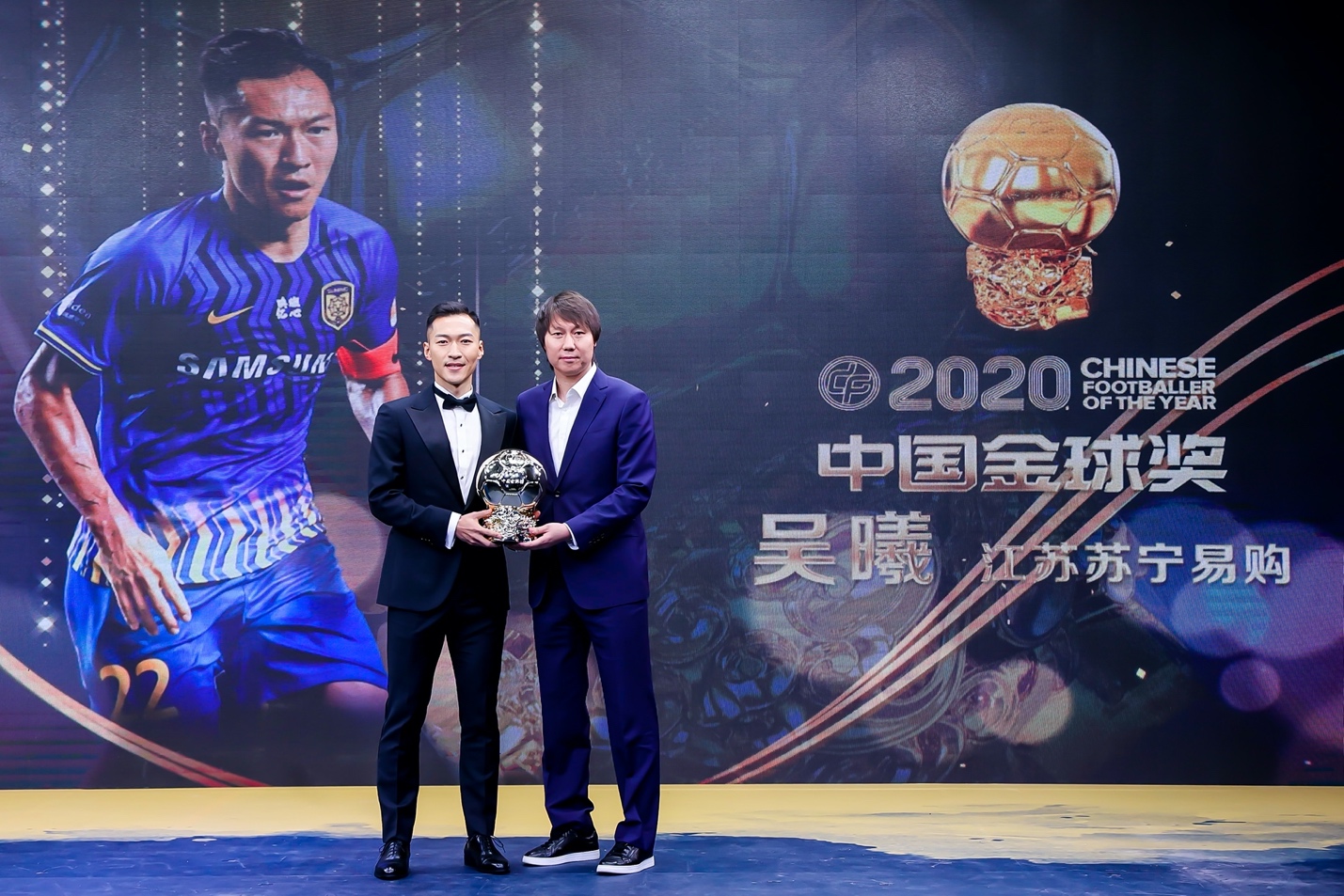 Wu Xi (L) is presented with the Chinese Footballer of the Year trophy by Team China head coach Li Tie at a ceremony in Beijing, China, January 17, 2021. /CGTN

Wu Xi (L) is presented with the Chinese Footballer of the Year trophy by Team China head coach Li Tie at a ceremony in Beijing, China, January 17, 2021. /CGTN

No wonder he was touted as Hebei's brightest young hopeful, gracing the cover of a sports magazine at age 9.

But it was Wu's astounding consistency that eventually set him apart from dozens of similar aspiring wunderkinds that had gripped the country's attention. He has rarely suffered a dip in form since making his CSL debut for Shanghai Shenhua in 2010, and has scored in 11 consecutive top-flight seasons, which is no mean feat, especially for a midfielder.

"I think my proudest accomplishment so far is that I've manage to maintained a high level of consistency. It's quite difficult for any player to stay at the top of his game for such a long time," Wu beamed. But he quickly betrayed the self-deprecating nature that makes him likable when pointing out, "I still have plenty of room for improvement and I haven't reached my fullest potential yet. I'll keep working on it."

His insatiable appetite for excellence stood him in good stead and played a vital role in convincing the up-and-coming Jiangsu, who finished runners-up in an impressive 2012 campaign, to lure him away from Shanghai. 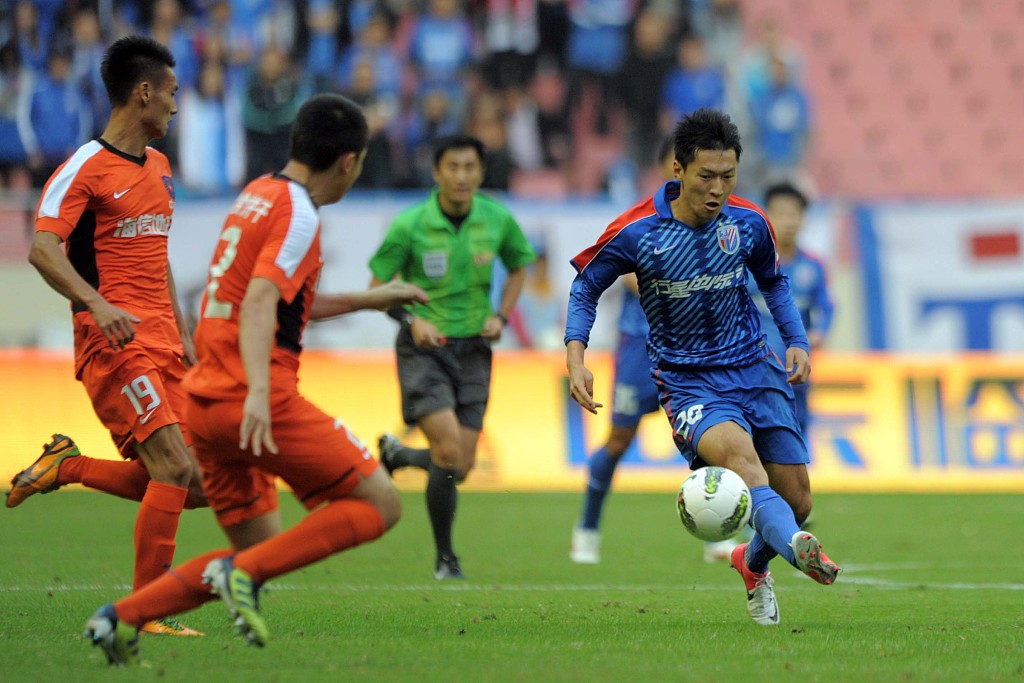 Wu's Jiangsu career didn't actually get off to the smoothest of starts. In his first appearance at the club, he was summoned from the bench at half-time with Dragan Okuka's side trailing South Korean giants FC Seoul by two goals in an ominous AFC Champions League opener.

Wu, along with fellow substitute Hamdi Salihi, did inject some much-needed tempo and urgency into Jiangsu's attacking play, but could not prevent their charitable defending from causing further mayhem. Thereafter it was a damage limitation mission in truth and they ended up losing 5-1.

However, for anyone who had the faintest notion of the quality that Jiangsu possessed, there would be comfort in the knowledge that the team could play much better than this.

And what has happened since is quite extraordinary.

Just a week after the ignominious thrashing at Seoul, Wu forced his way into the starting XI of a emotion-charged squad as Jiangsu duly dusted off their early season lethargy and clinched their first-ever Super Cup title with a morale-boosting 2-1 win over CSL defending champions Evergrande. 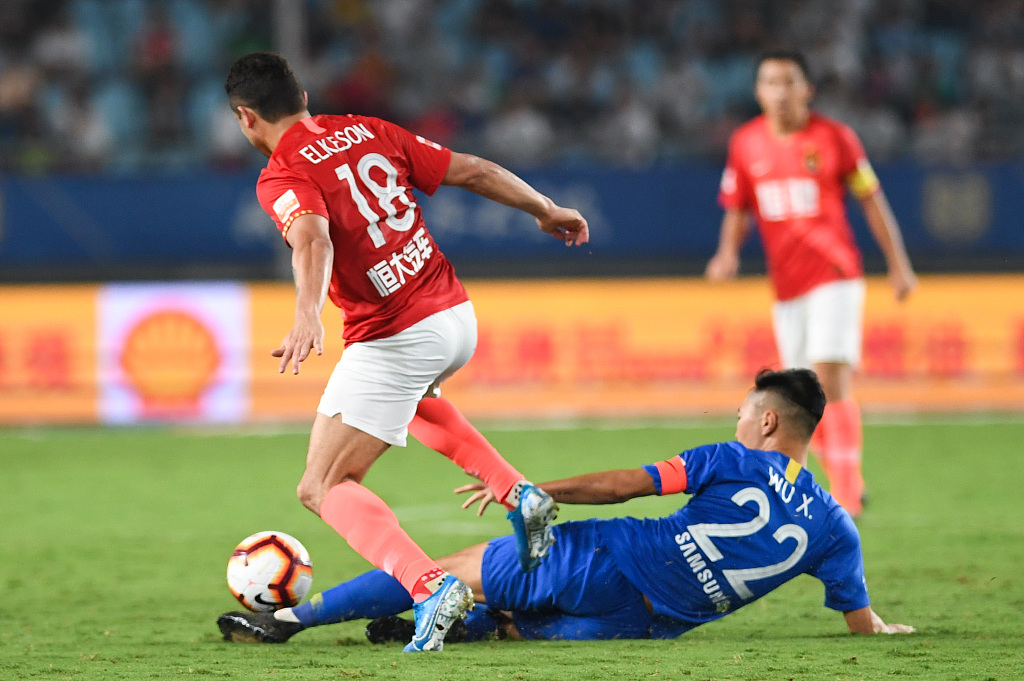 Wu still vividly remembers the feeling of relief after witnessing his team stage the dramatic turnaround. "It was my first year at Jiangsu and we were in the thick of the relegation dogfight. The whole episode left a deep impression on me because we only secured CSL survival on the last day of the season. It proved to be a turning point in my career."

Fast forward to the present day and Wu is the indefatigable, ever-reliable captain who fuels the engine of Jiangsu's admirable success. He was the unflashy standard-bearer that played the perfect foil for the more glossy Alex Teixeira. His sturdy work ethic and unwavering desire to put his body on the line often masked an intelligence and awareness on the pitch that marked him out as an indispensable club legend.

"Wu is the best Chinese player I've ever seen," proclaimed Jiangsu head coach Cosmin Olariou, who took over from legendary Italian tactician Fabio Capello in 2018 and oversaw one of the most remarkable title conquests in the CSL.

At the international level, Wu has been a virtually permanent fixture in Team China since winning his first cap in a 6-1 rout of Laos in 2011. Despite the country's much-maligned efforts at making a breakthrough on the world stage, you won't hear a bad word said about Wu. He always gives his all in a China shirt and his fighting spirit is only enhanced by the composure he exudes in the most high-stakes moments. 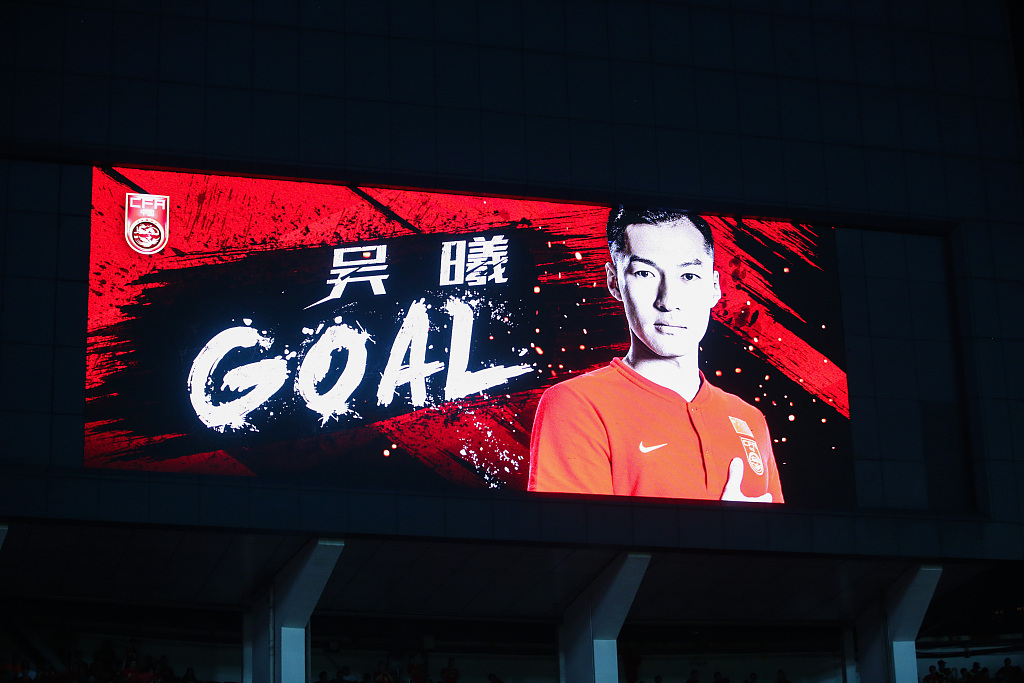 Wu Xi's image is beamed on to a big screen after he scores for China at Guangzhou Tianhe Stadium, Guangzhou, Guangdong Province, China, October 10, 2019. /CFP

Wu Xi's image is beamed on to a big screen after he scores for China at Guangzhou Tianhe Stadium, Guangzhou, Guangdong Province, China, October 10, 2019. /CFP

"When I received my first call-up to the China squad, I was a very young and inexperienced rookie," said Wu, looking back on his international career that has spanned a decade. "Only after I cut my teeth at several major tournaments did I accumulate enough professional know-how to deal with unexpected events in big games.

"It's very important for players to learn how to react appropriately to different scenarios because sometimes you have to make split-second decisions on the pitch. And when you have a wealth of experience, you might be able to rise to the occasion and punch above your weight."

However, for all his commitment and devotion, Wu has failed to deliver a reversal in fortune for China. And as a ferocious competitor, he never hides from the bitterness he feels in defeats. "My biggest regret over the past few years is that I was unable to help the national team earn a ticket for the World Cup," he winced.

There is of course still a chance to rectify this situation. Asia's second round of qualifiers for the 2022 World Cup is set to resume in March following a postponement due to COVID-19. China, sitting eight points behind group leaders Syria with a game in hand, face an uphill battle as only eight group winners and the four best runners-up will advance to the continent's 12-team final qualifying stage. 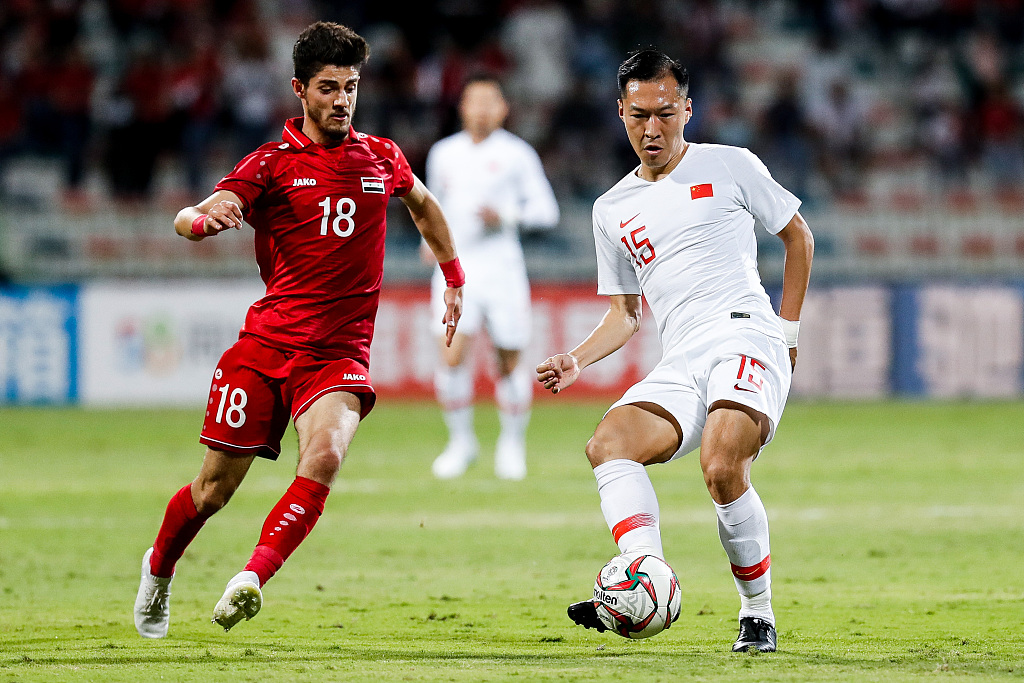 But this time around, China's quest to reach the showpiece event is boosted by the addition of a bunch of foreign stars who switched allegiances to the Middle Kingdom after impressing in the CSL.

"There is no denying that the naturalized players are a cut above the rest in terms of individual ability because they are the cream of the crop in our league," Wu commented. "Hopefully, they could translate their club form to the international stage and play the role that they are supposed to play, be a clinical finisher who scores the winner or a playmaker who makes incisive passes. I think that's how they could prove their worth."

As for the public skepticism over the rationale behind the policy of naturalization, Wu was philosophical about the backlash and pointed out that the crux of the matter is that the naturalized players should genuinely perceive themselves as Chinese people and "realize the importance of being a part of the Chinese team."

"What we need is to develop a strategic long-term vision that fits the circumstances in our country," Wu continued. "It could be a 20-year or 30-year plan with a bottom-up approach. Only after the emergence of a far-sighted project could we reap rewards of patience and see real change happen."

Though colossal challenges loom ahead, Wu remained sanguine about China's prospect of instigating a transformation. "As long as we step onto the pitch, we're going to give it our best shot. And if we manage to play to our full strength, we will certainly achieve good results," he declared. "Our aim is to progress into the 12-team final stage and we won't be afraid of any opponent."

Tottenham legend Ledley King: 'Chinese football will be a force to be reckoned with'