Xiaonian Festival is often regarded as the last special day before the Chinese New Year. Falling on the 23rd or 24th day of the last month of the traditional Chinese lunar calendar, it usually marks the countdown to the Chinese New Year, also known as the Spring Festival.

This year, Xiaonian falls on Thursday. To ensure a stable and abundant market supply for the Chinese New Year, Chinese President Xi Jinping visited a supermarket and a local community in Guiyang City, southwest China's Guizhou Province, to inspect their preparations ahead of the holiday.

Chinese people like buying necessities in bulk as the New Year approaches. The coming of Xiaonian rings the bell of a final push to the Chinese New Year, thus, a smooth and orderly operation of market supply is particularly important.

A visit to ordinary people

In the Heli fresh food supermarket, Xi checked the supply of food and other daily necessities. He also learned the price level there to make sure all the goods are affordable for ordinary people. 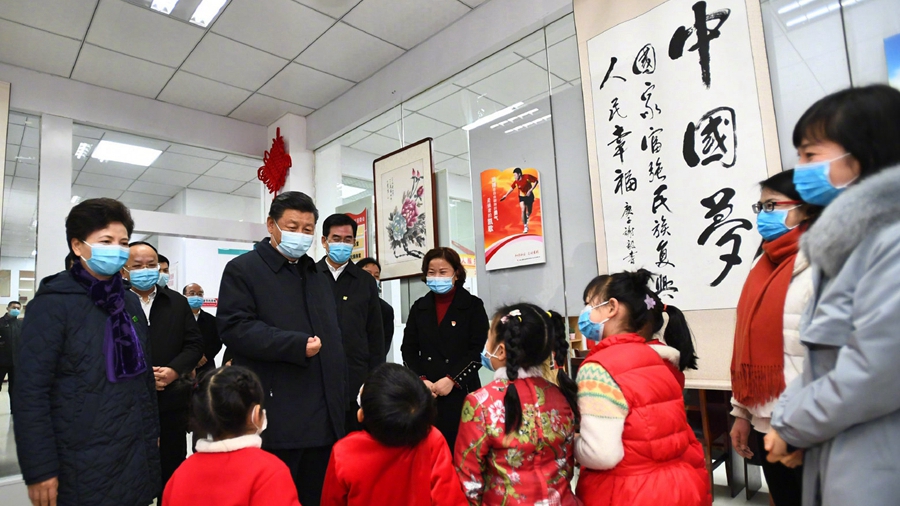 He then visited Jinyuan Community in Guanshanhu District to check the operation of community services and their influence on residents' daily lives.

After seeing residents creating paper-cuts for the festival, Xi joined them and extended his warm wishes by writing a traditional Spring Festival couplet.

Both paper-cutting and writing couplets are Chinese New Year customs. Paper-cutting works are used to express well wishes, and are often applied to windows as decorations. Spring Festival couplets are often written with Chinese calligraphy. Pasting on both sides of a door, it is believed that the sincere wishes and New Year greetings written on the couplets will bring good luck to the whole family.

It marked the second day of Xi's visit to Guizhou Province. On the previous day, he visited people from the Miao ethnic group in Qianxi County.

The pre-Spring Festival visit is not a surprise. For nine consecutive years, Xi has made it a tradition to visit ordinary people, especially the disadvantaged groups, ahead of the most important holiday on the Chinese calendar.

In 2020, Xi visited Simola Wa Village in southwest China's Yunnan Province and joined a family of the Wa ethnic group in making rice cakes and beat a wooden drum three times as a local ritual to bless the coming year.

In 2019, Xi made an appearance in the hutong neighborhoods of central Beijing and dropped in on an express delivery station where he praised the hard work of deliverymen, saying they were "busy as bees" to bring convenience to people's lives.

Xi may visit a different place every year, but wherever he goes, his care for the livelihood of ordinary people never changes.