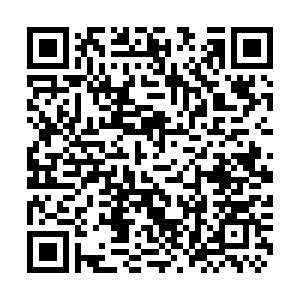 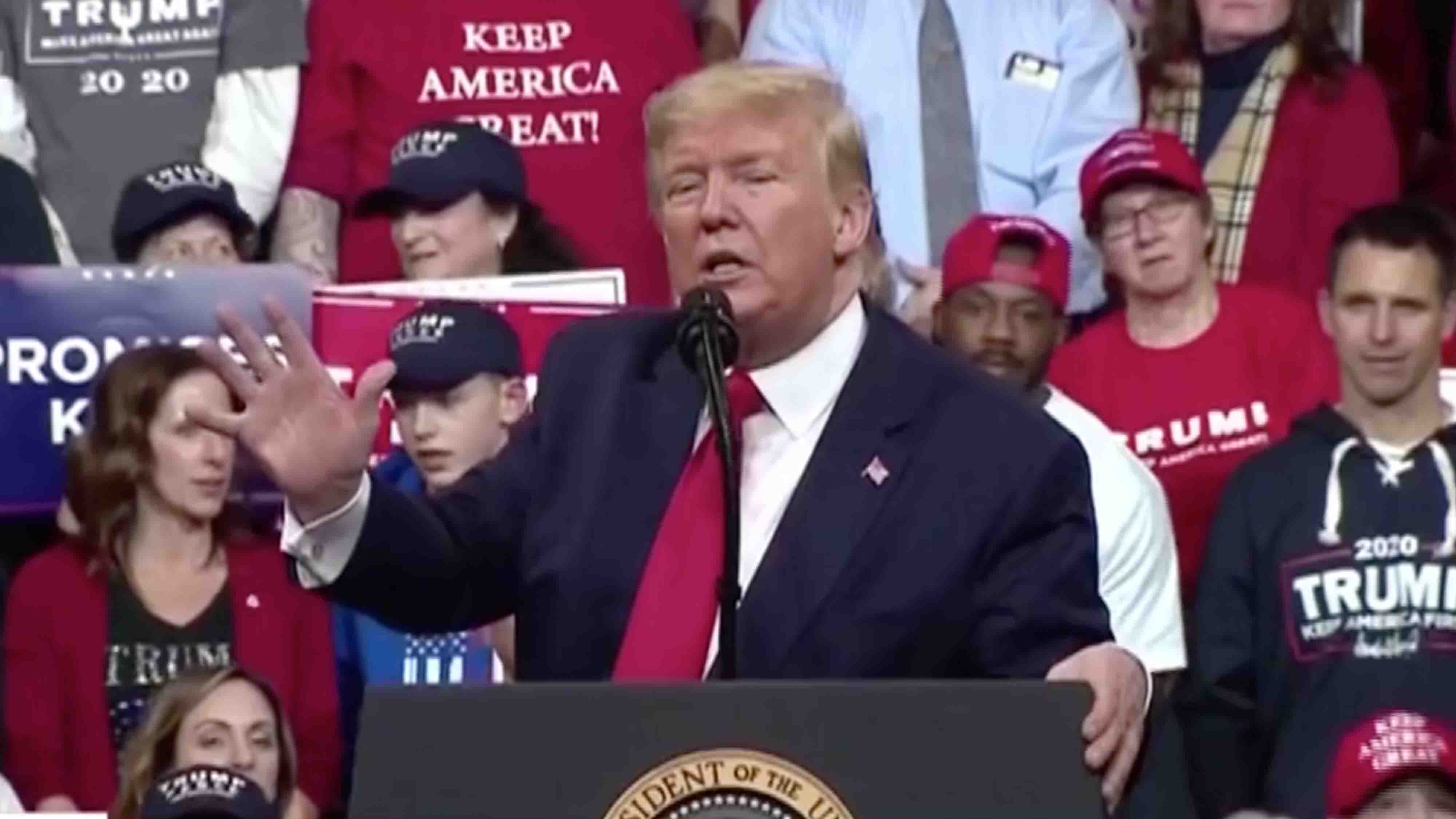 Former U.S. President Donald Trump's historic second impeachment trial opened Tuesday with a video showing him whipping up a rally crowd to march to the Capitol and "fight like hell" against his reelection defeat, followed by images of the deadly attack on the Capitol building that came soon after.

Trump's team lost a crucial bid to halt the trial on constitutional grounds on the opening day of the trial. Senators confirmed their jurisdiction over the trial, the first of a president no longer in office.

Because of the COVID-19 crisis, senators were allowed to spread out, including in the "marble room" just off the Senate floor, where proceedings are shown on TV, or even in the public galleries above the chamber. Most were at their desks on the opening day, however. Senator Patrick Leahy of Vermont is presiding the trial.

Security remained extremely tight at the Capitol on Tuesday, fenced off with razor wire and armed National Guard troops on patrol.

The agenda of Tuesday's session was to vote for the constitutionality of impeaching a former president over a single accusation: "incitement of insurrection."

A Senate majority of 56-44, including six Republicans, voted to hold a full impeachment trial, backing Democrats' argument that the proceeding is allowed under the U.S. Constitution.

Republican Senator Rand Paul managed to lead an effort of 45 out of 50 fellow Senate Republicans voting the trial was unconstitutional last month.

One of the 45 Republican senators changed his stand on Tuesday. Bill Cassidy, a Louisiana senator, told reporters after the House impeachment managers presented their side that they "had a good opening." 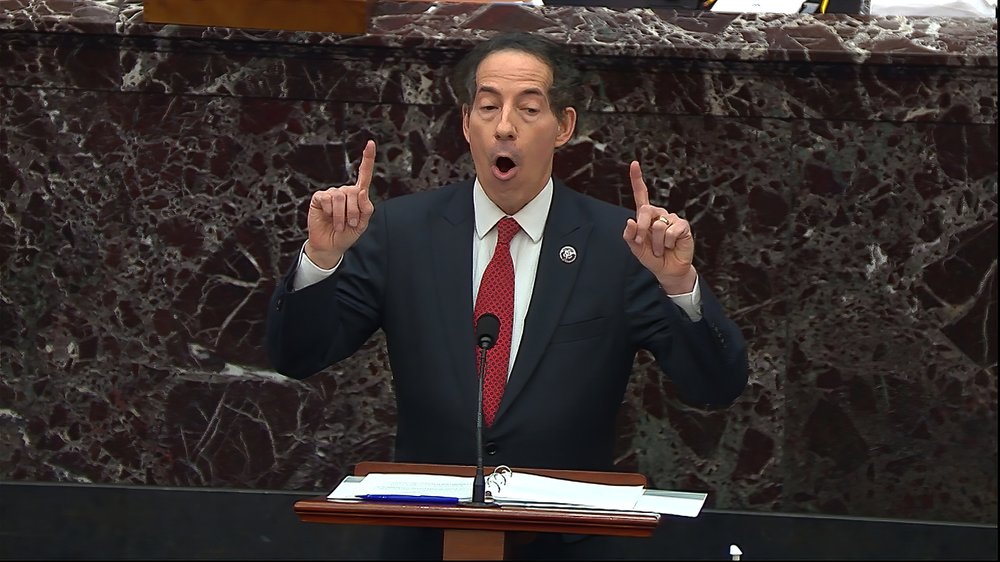 The highlight of the Tuesday's hearing was the 13-minute video presented by the Democratic House Manager Jamie Raskin at the start of their argument.

"That's a high crime and misdemeanor," declared Raskin, in opening remarks. "If that's not an impeachable offense, then there's no such thing."

A video juxtaposed the proceedings in the House and Senate on January 6 with the riot happening outside. Five people died that day.

Senators sitting as jurors, many who themselves fled for safety that day, watched the jarring video of Trump supporters waving Trump flags and battling past police to storm the halls.

"I don't know whether to cry or throw up," tweeted CNN contributor Amanda Carpenter about the video.

The House prosecutors, Joe Neguse, argued there is no "January exception" for a president on his way out the door.

Neguse referred to the corruption case of William Belknap, a war secretary in the Grant administration, who was impeached, tried and ultimately acquitted by the Senate after leaving office. 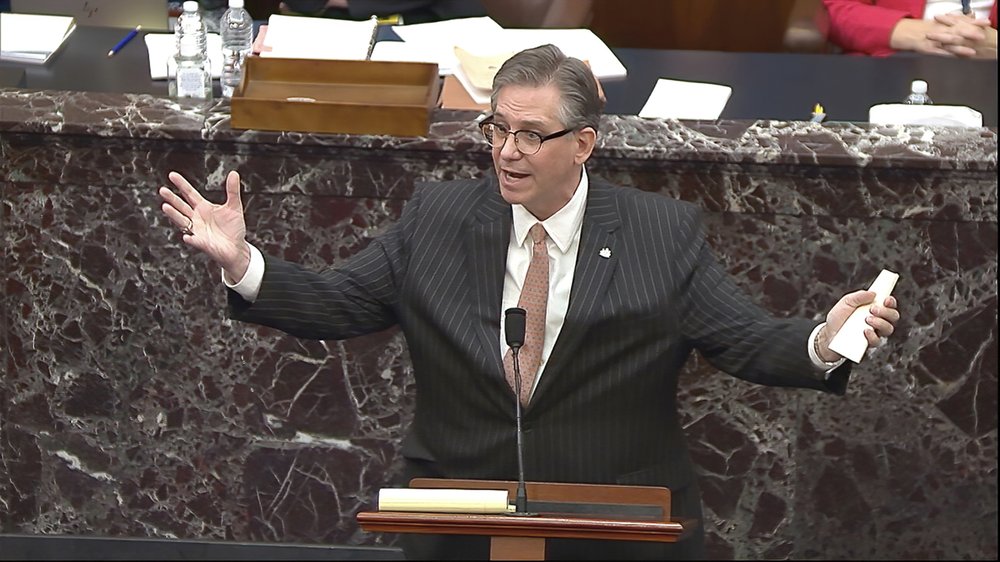 Bruce Castor, an attorney for former President Donald Trump, speaks during the second impeachment trial of Trump in the Senate at the U.S. Capitol in Washington, D.C., February 9, 2021. /AP

Bruce Castor, an attorney for former President Donald Trump, speaks during the second impeachment trial of Trump in the Senate at the U.S. Capitol in Washington, D.C., February 9, 2021. /AP

Lead lawyer Bruce Castor set the tone to differentiating between supporting the riots and acquitting Trump.

Castor said that no member of the former president's defense team would do anything but condemn the violence of the "repugnant" attack, and "in the strongest possible way denounce the rioters."

Yet Trump's attorney appealed to the senators as "patriots first," and encouraged them to be "cool headed" as they assess the arguments.

Castor also argued that since Trump is no longer holding the president's office, "the object of the Constitution has been achieved. He was removed by the voters."

But the Constitution goes on to provide another legitimate consequence of impeachment: "Disqualification to hold and enjoy any office of honor, trust or profit under the United States."

Trump attorney David Schoen turned the trial toward starkly partisan tones, the defense showing its own video of Democrats calling for the former president's impeachment.

Schoen said Democrats are fueled by a "base hatred" of the former president and "seeking to eliminate Donald Trump from the American political scene."

Trump on trial: The background, the arguments, the consequences 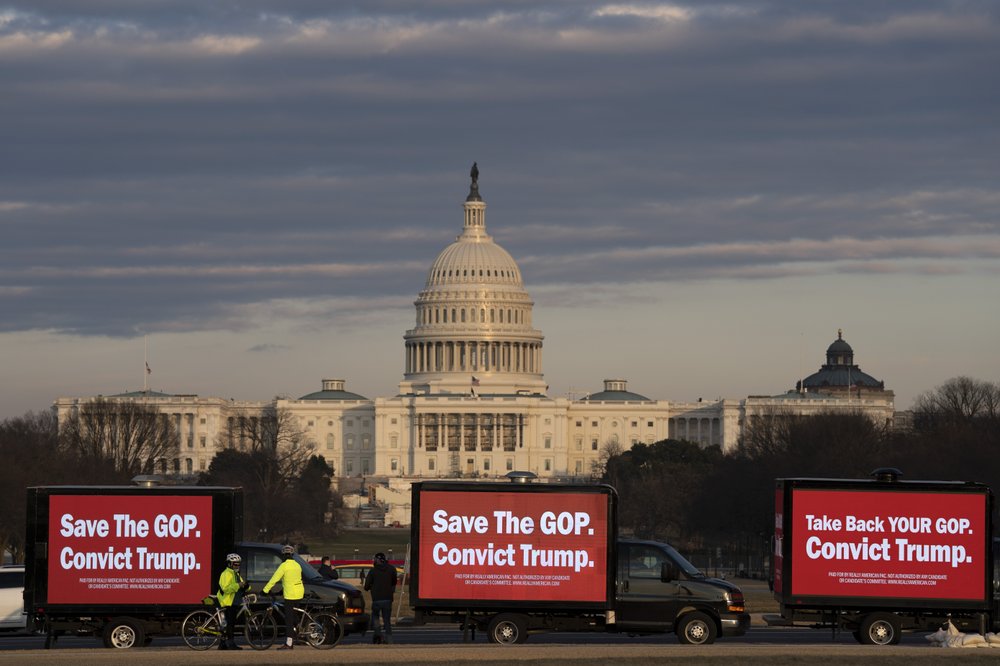 Billboard trucks parked on the National Mall near the U.S. Capitol during the impeachment trial of former President Donald Trump in Washington, D.C., February 9, 2021. /AP

Billboard trucks parked on the National Mall near the U.S. Capitol during the impeachment trial of former President Donald Trump in Washington, D.C., February 9, 2021. /AP

Schoen, who is observing the Jewish Sabbath, had requested that the trial be suspended at sundown on Friday to accommodate his religious beliefs. But he withdrew that request on Monday, according to CNN.

The trial is expected to continue if necessary during the upcoming federal holiday on Monday for Presidents Day. Monday could also be the day to vote for the conviction, which can be ironic given the historic meaning behind the trial.

While six Republican senators joined the Democrats in proceeding as an early test, the tally showed how far prosecutors have to go to win conviction: a two-thirds threshold of 67 senators, including 17 Republican votes.

Acquittal is highly likely. If Trump is convicted, there would be a subsequent vote on whether to bar him from further office. This would require only a simple majority.