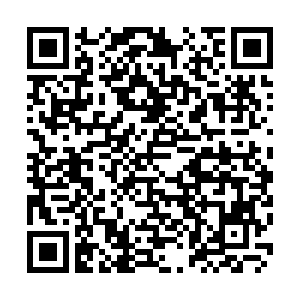 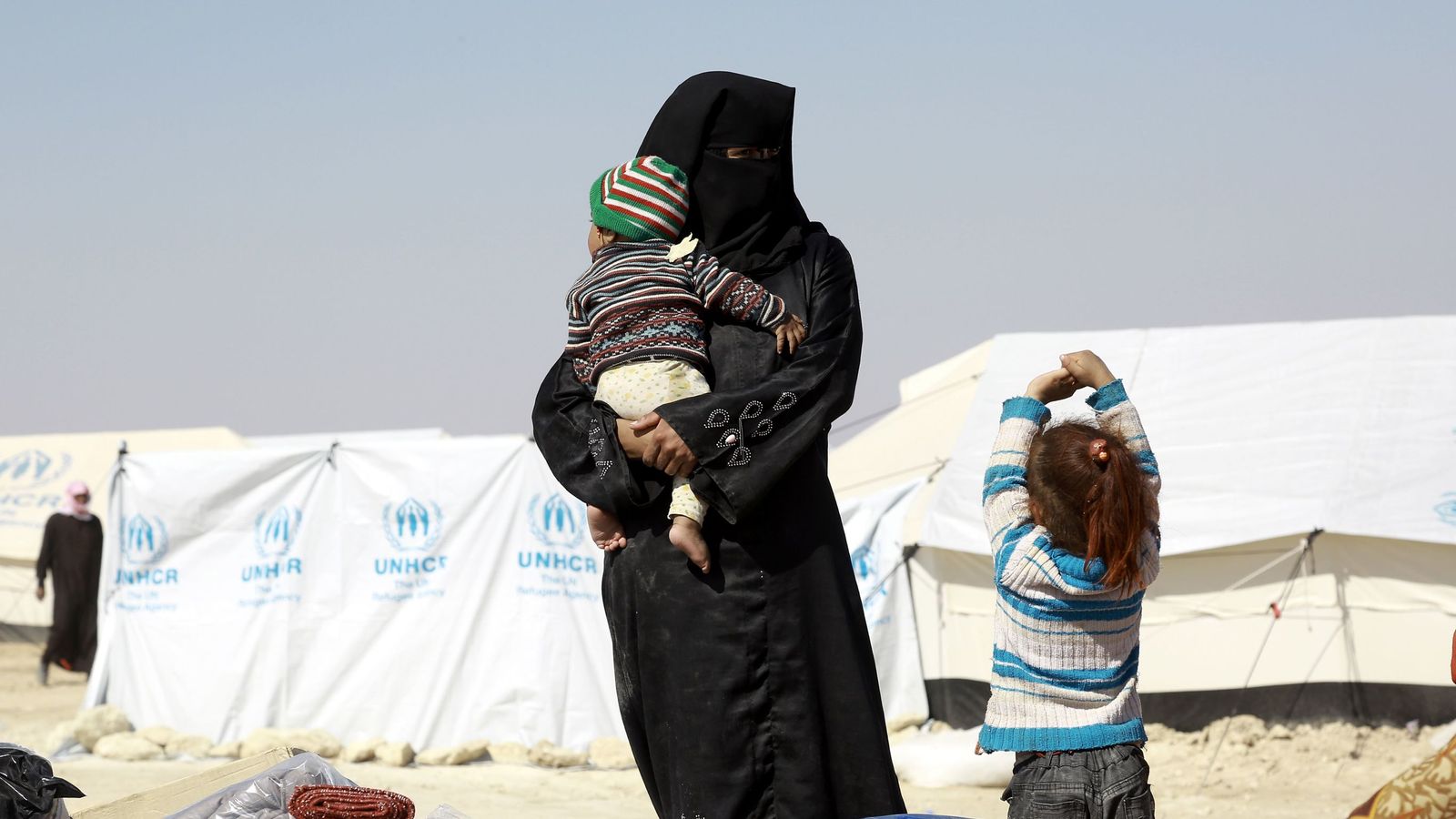 Thousands of ISIL women and children are held at the al-Hawl refugee camp in Syria. /Getty

Thousands of ISIL women and children are held at the al-Hawl refugee camp in Syria. /Getty

When she was photographed recently at a refugee camp in northern Syria, Shamima Begum looked like any Western tourist. Having ditched black niqab for casual wear, her transformation came as a shock to those who had known her story.

The 21-year-old is one of the most recognized faces of the so-called "jihadi brides" – Western-born women married to ISIL jihadists in Iraq and Syria.

In 2015, when she was a 15-year-old school girl, Begum left her east London home with two friends to join the extremist group in Syria, where they would marry ISIL fighters and help build the "caliphate." The two other girls were later killed in the Syrian civil war, as was Begum's Dutch husband. 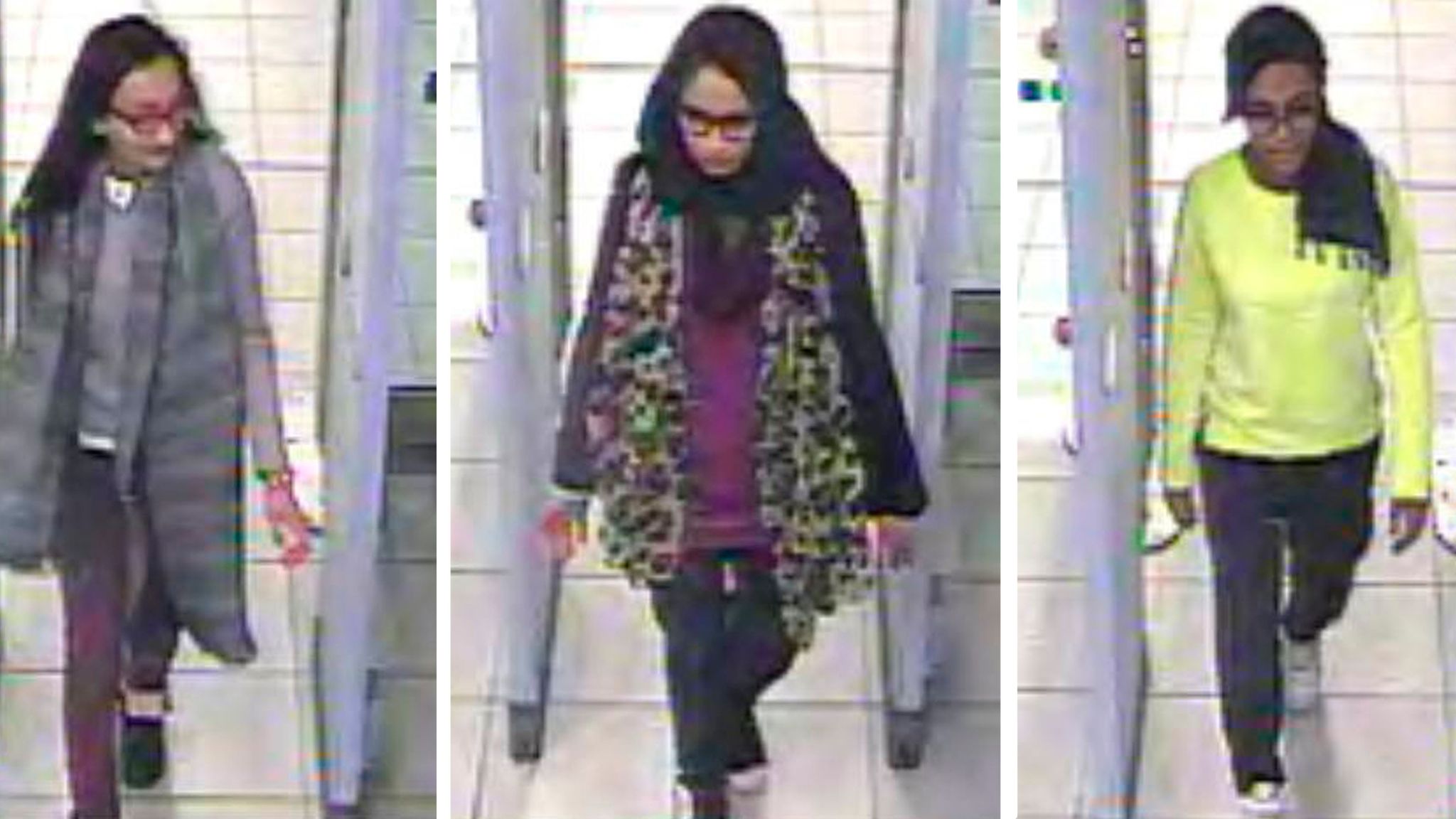 Shamima Begum (C) and her two friends are pictured going through security at London Gatwick Airport before heading to Syria, February 17, 2015. /AP

Shamima Begum (C) and her two friends are pictured going through security at London Gatwick Airport before heading to Syria, February 17, 2015. /AP

As the group lost control of large swathes of territories from 2017 onwards, women and children in ISIL-held areas poured into refugee camps in huge numbers, many of them families of ISIL members.

Begum re-emerged in 2019 at one of the Kurdish-run camps, where she had lost two children. Heavily pregnant with a third child, she asked Britain to take her back, but was met with fierce opposition back home. The Bangladeshi-Briton had her citizenship revoked on national security grounds. Her newborn died in Syria shortly afterward.

In February, Britain's Supreme Court denied Begum's right to appeal against the revocation of her citizenship in the UK. The decision has effectively rendered Begum and others in her situation stateless. The tribunal said Begum was in that situation "as a result of her own choices." 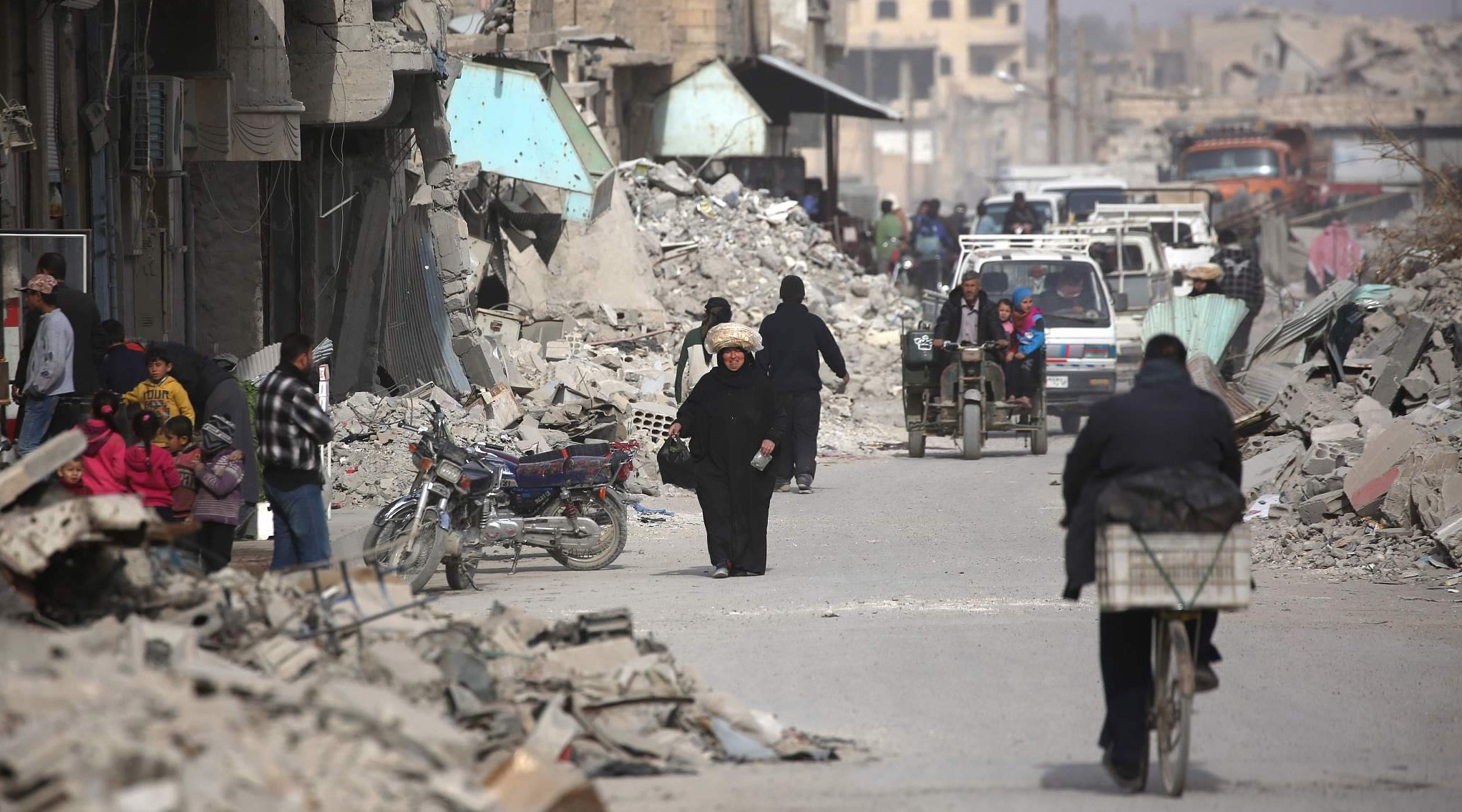 Syrians walk amidst the debris of destroyed buildings in the former ISIL capital of Raqqa in Syria, January 11, 2018. /VCG

Syrians walk amidst the debris of destroyed buildings in the former ISIL capital of Raqqa in Syria, January 11, 2018. /VCG

Similarly, another high-profile case in 2019 saw American-born Hoda Muthana being banned from returning to the U.S. after a federal judge ruled she is not an American citizen.

Stranded in sordid conditions that keep worsening as time goes by, many foreign women held at the al-Hawl camp in Syria have been trying to return home with their children fathered by jihadists. But their home countries have made it clear that they are not welcome.

Several Western women at the camp expressed regret and asked their countrymen for a second chance when approached by the media. The story often being told is one of youthful gullibility and how as young girls, they "made a mistake" to wed jihadists abroad.

As in the case of Begum, most of the women maintained that their only role in ISIL was being a housewife, removed from the atrocities the group is known for. Others claimed they were "tricked" into the warzone by their radicalized partners and "trapped" inside the "caliphate" till its end.

The true extent of these women's involvement may never be known, but judging by the overwhelming backlash their stories have generated back home in Europe, North America and Australia, particularly from fellow Muslims, people are far from convinced by their professed innocence.

In the last two years, France, Belgium, Germany and Finland have all brought back children of ISIL members and some of the mothers from Syria. Whether for security or humanitarian reasons, these repatriations remain profoundly unpopular and a thorny issue for states. 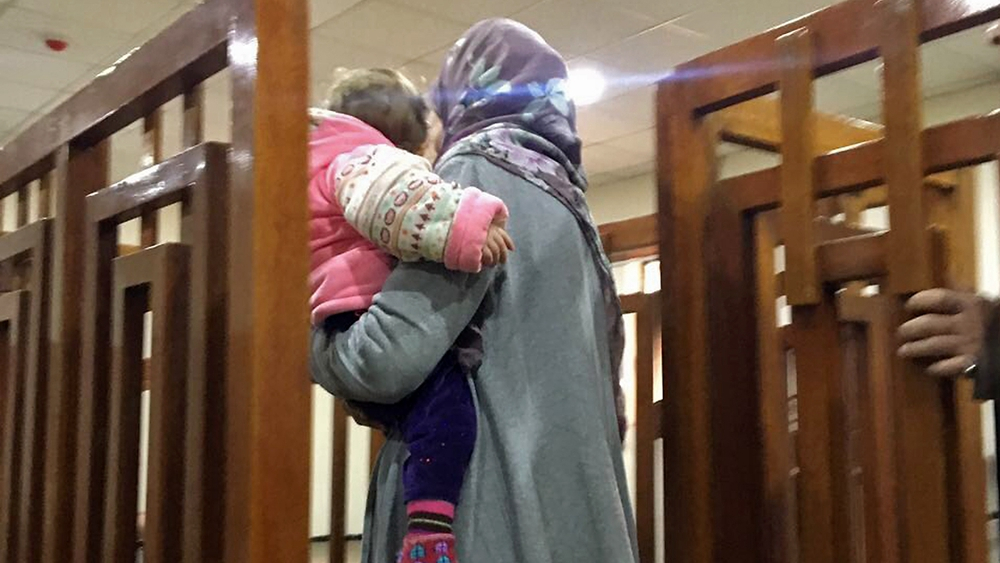 A French female jihadist arrives in court carrying her son in the Iraqi capital of Baghdad, February 19, 2018. /VCG

A French female jihadist arrives in court carrying her son in the Iraqi capital of Baghdad, February 19, 2018. /VCG

Security and counterterrorism experts largely agree that Western jihadists should face justice back home, but complications arise for the prosecution due to lack of evidence.

Meanwhile, the United Nations has urged countries to repatriate 27,000 foreign children stranded in Syria, as Kurdish forces increasingly struggle to guard those camps.

Since it declared a caliphate in 2014, ISIL's success in recruiting foreign women, especially those from the West, has been unprecedented.

Up until March 2019, ISIL had recruited thousands of young people from the West, with a high proportion of them being female. According to a 2019 study by the International Centre for the Study of Radicalisation (ICSR), at least 550 of the roughly 4,000 Westerners who joined ISIL in Iraq and Syria were self-identified muhajirat, or female migrants.

The mass migration was a reminder that women take part in violent extremism just as easily as men, said Rachel Bryson, an analyst who studies gender and youth in extremist groups. 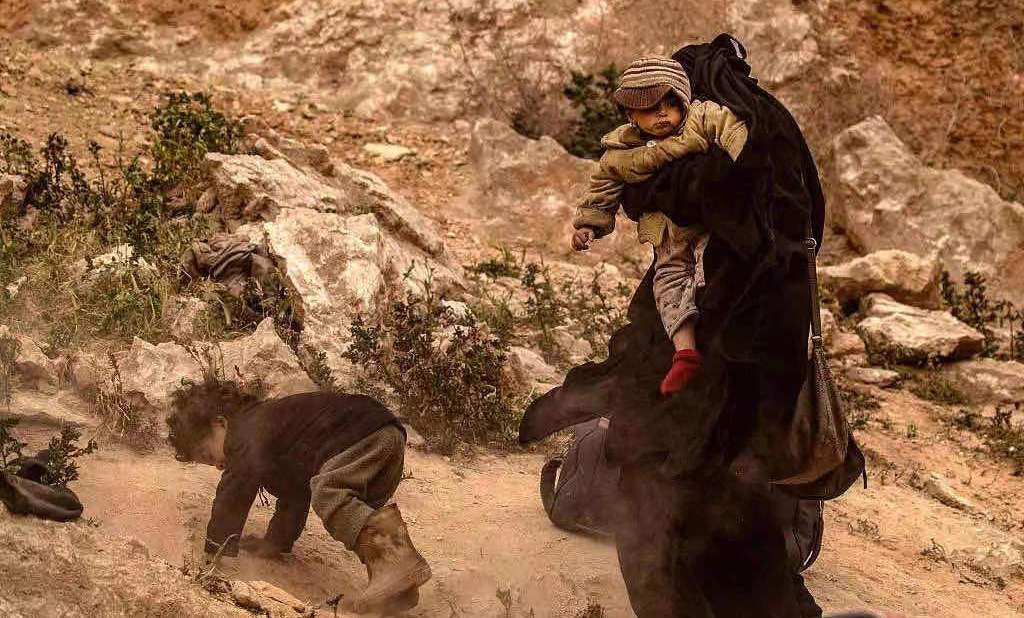 Families of ISIL fighters surrender in Baghuz, the last piece of territory held by the group before it's defeated in Syria, March 14, 2019. /VCG

Families of ISIL fighters surrender in Baghuz, the last piece of territory held by the group before it's defeated in Syria, March 14, 2019. /VCG

Various studies into the phenomenon found that contrary to popular perception about women's subjugation in Islam, ISIL offered women more agency than its predecessors and, in some cases, better opportunities than what were available to them in the past.

Militants' wives have been known to have acted as propagandists and enforcers of the so-called morality of the "caliphate." Researchers have concluded that women in ISIL are primarily driven by religious ideals just like men, and thus should be taken as seriously.

The UN has warned that the "jihadi bride" stereotype, which ties women to their relationships with men, is causing female ISIL members to be dangerously underestimated by security services.

For women, social belonging is also an important factor luring them to ISIL, noted Jessica Davis, an international terrorism consultant and author of "Women in Modern Terrorism: From Liberation Wars to Global Jihad and the Islamic State."

Among the many false promises peddled to its young followers online, the group's message of empowerment – aided by images of gun-toting female combatants in niqabs – proved a potent one for girls who have felt like outsiders in their own societies. 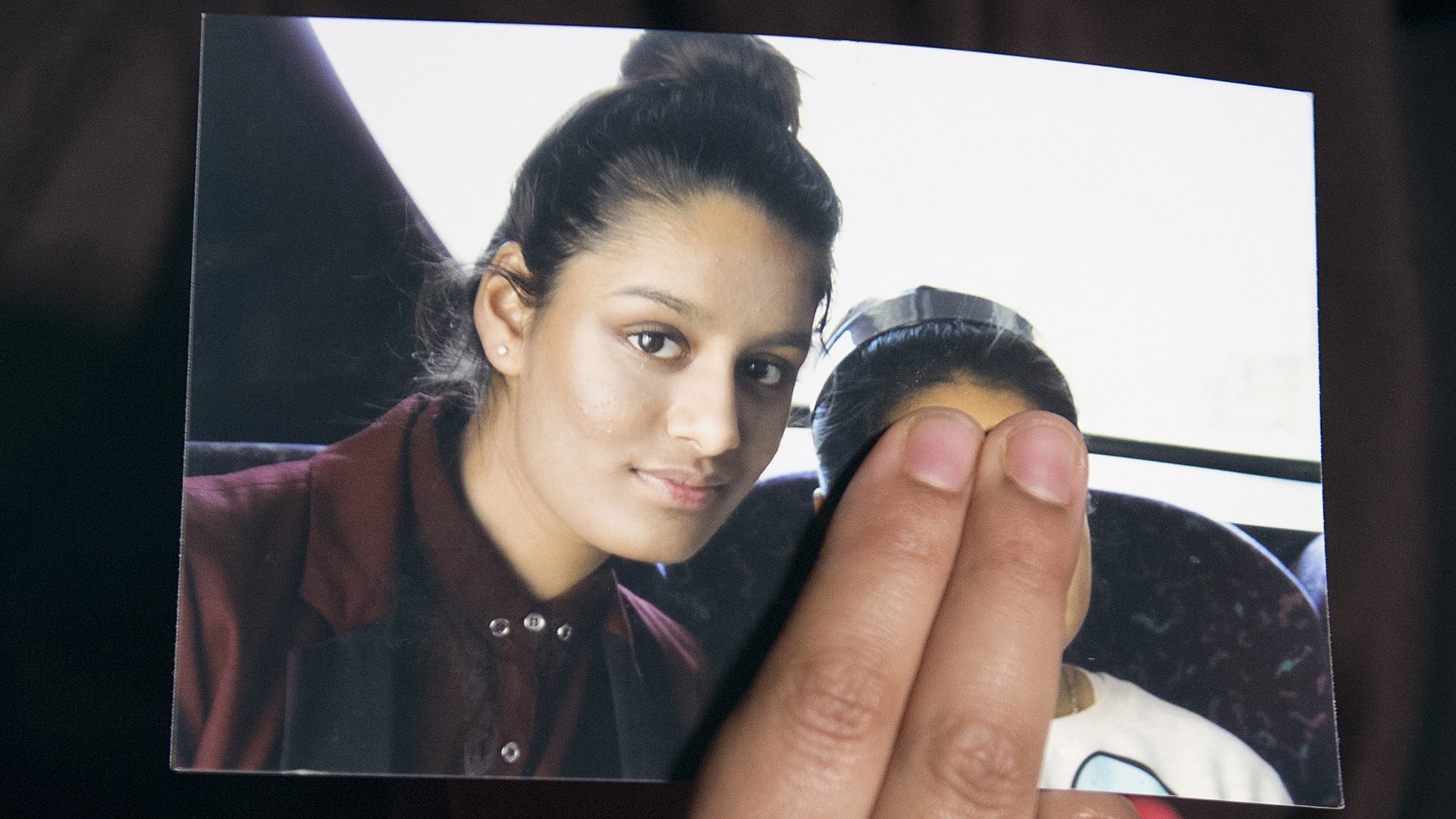 A photo of Shamima Begum before she traveled to Syria in 2015. /AFP

A photo of Shamima Begum before she traveled to Syria in 2015. /AFP

"If a false sense of empowerment attracted women to join ISIL, we need to make its worldview known for what it is," said Mohammad Naciri, who served as the regional director of UN Women for Arab States from 2015 to 2018.

Some experts also cautioned that for every Western youth who made the trip to Syria, there were hundreds more mulling over it behind a screen.

That said, the reality those women now find themselves in couldn't be more different from the utopia they left home for.