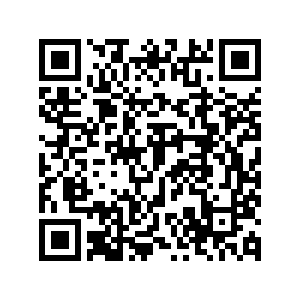 China's gross domestic product (GDP) expanded at a record pace of 18.3 percent year on year during the first quarter of this year as it rebounded from a historic contraction a year earlier, data from the National Bureau of Statistics (NBS) showed Friday.

China recorded a year-on-year contraction of 6.8 percent in the first quarter of 2020, when the country had to pause its economic activities to contain the spread of COVID-19, setting the stage for a dramatic rebound this year. A soar in March exports of over 30 percent year on year, benefiting from a recovering global economy, was the most recent example of this base effect. 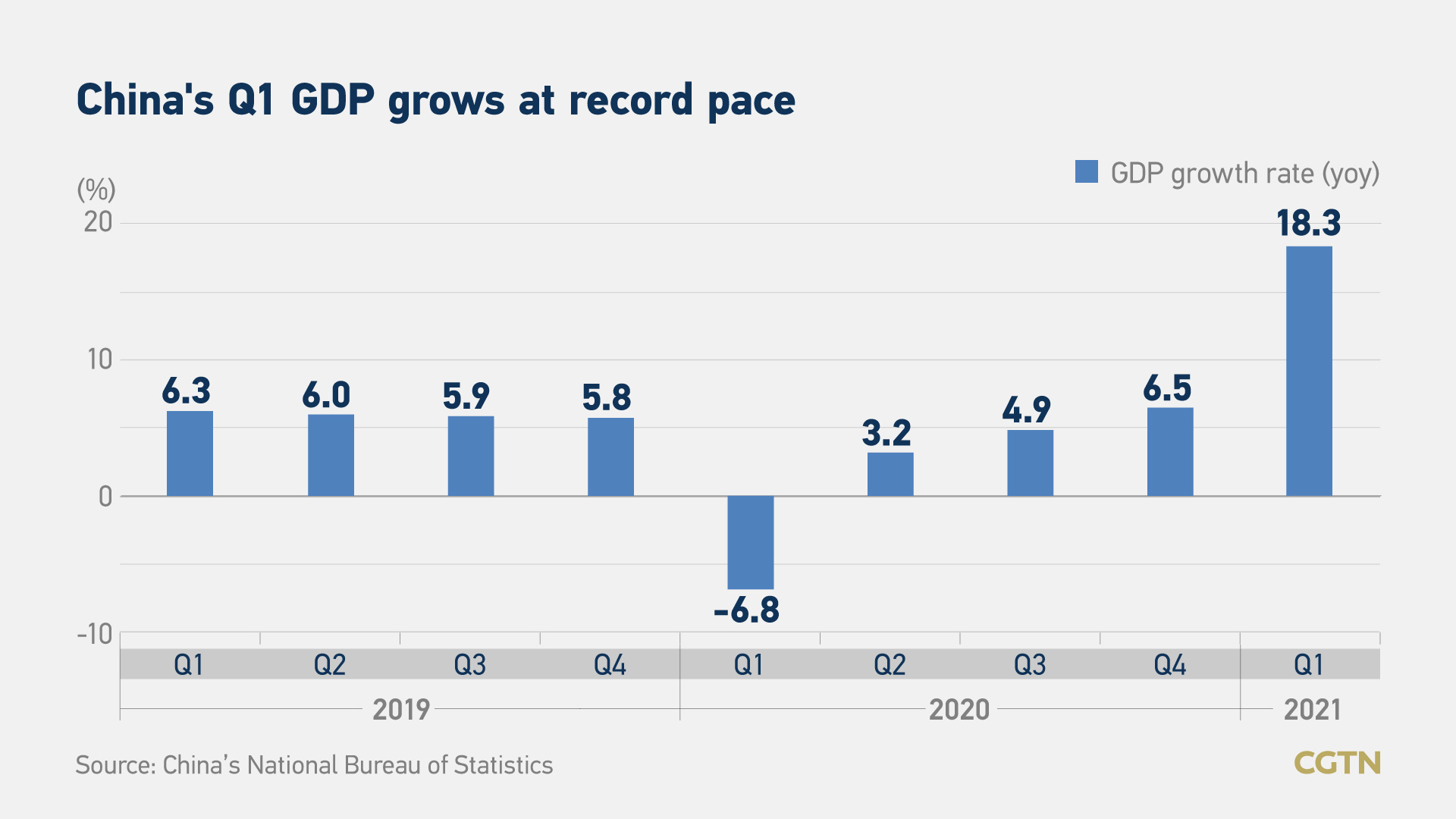 China's recovery has been led by robust exports, benefiting from the global economic recovery along with greater vaccination efforts and a steady pickup in domestic consumption.

Retail sales increased 34.2 percent from a year earlier in March, stronger than the 33.8 percent jump seen in the first two months of the year and outperforming the growing pace of industrial output, which registered at 14.1 percent in March.

In the first quarter, online retail of goods grew by 25.8 percent from the same period last year, accounting for 21.9 percent of total retail sales. Liu Ligang, chief China economist at Citi Group said the government's anti-monopoly move against large e-commerce platforms including Alibaba could "slow online shopping" on the one hand but also "encourage competition" as "more newcomers will drive growth."

Meanwhile, data showed that China's services sector generated more than 14 trillion yuan (about $2.2 billion) in value, reaching 58.3 percent in the first-quarter GDP. This an expansion from last year's 54.5 percent, which vindicates the sector's pillar role in China's economy, according to Liu, who believes the services sector will get a boost from China's rising rate of inoculated population and continue to lead China's economic growth this year. 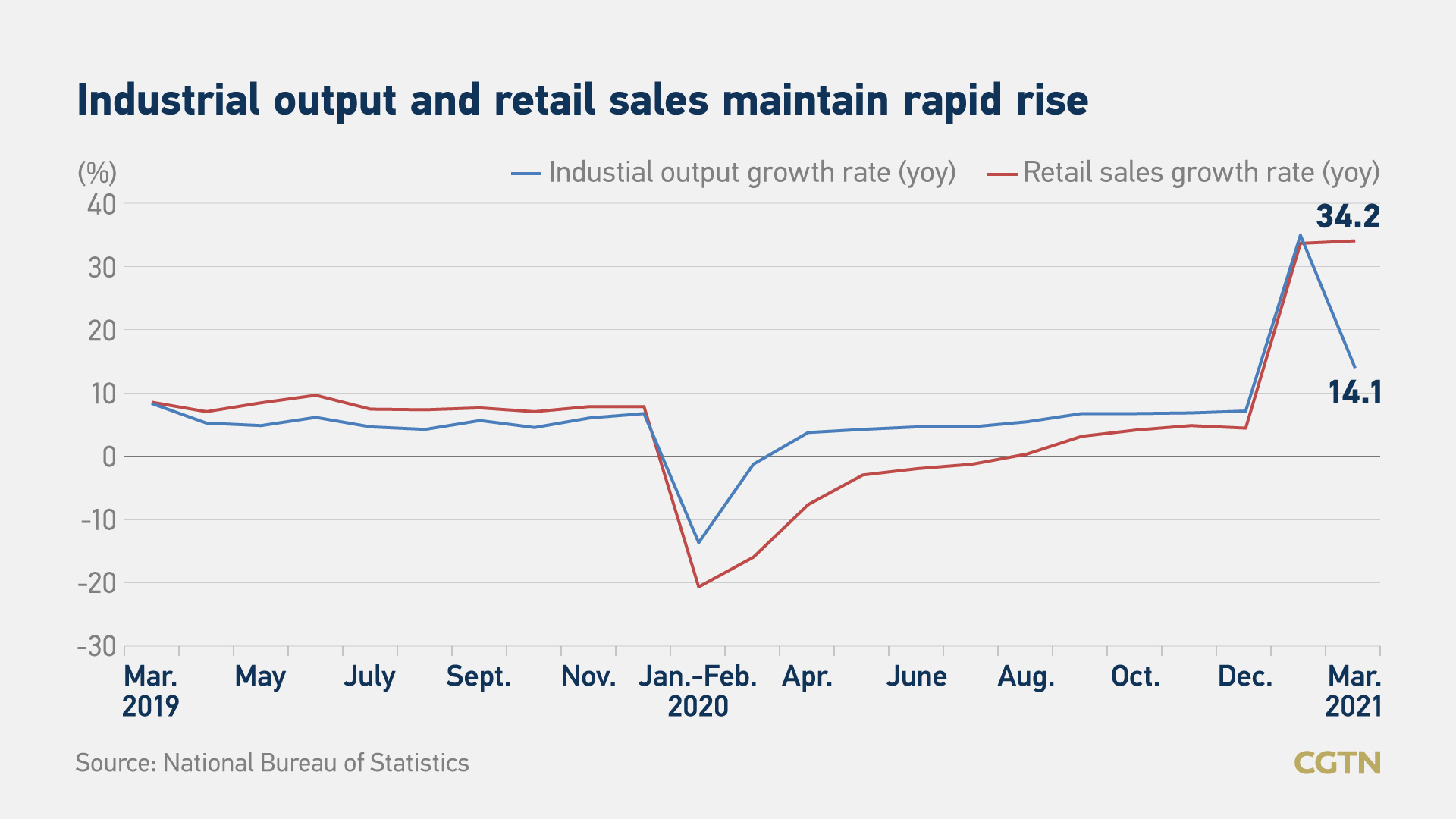 "The acceleration of retail sales growth in March may have been a result of pent-up demand, after Beijing lifted the restrictions that were imposed to counter the wave of new COVID-19 cases right before the Lunar New Year holiday," Lu Ting, chief China economist at Nomura Securities said in a note to CGTN.

On a quarterly basis, China's economic growth rate during the first quarter slowed to 0.6 percent from a revised 2.6 percent in the previous quarter, due to the wave of new cases right before the Lunar New Year holiday, according to Lu.

Aided by strict epidemic control measures and emergency relief for businesses, "first into the pandemic, first out" momentum has enabled China to continue a steady recovery. The country's economy grew 6.5 percent in the fourth quarter and 2.3 percent for the entire year – making it the only major economy to expand in 2020.

The country has tried to re-balance the economy towards consumption. Chinese Premier Li Keqiang announced a full-year growth target of "at least 6 percent" at the annual session of the National People's Congress in March. He said the loosely defined economic growth rate is meant to nurture quality growth, requiring relatively sufficient employment, income growth, and sustained improvement of the ecological environment.

Consumption in large cities has mostly recovered to the pre-pandemic level but retail markets in small cities continued to slide, she said.

Infrastructure investment was weak as the central government made efforts to lower the macro leveraging ratio, so local governments are not enthusiastic about piling up new debt to finance local projects, according to Wang.

Is the momentum sustainable?

Retail sales are likely to achieve a 22.2 percent increase year on year in April, Lu forecasted, "as more pent-up demand is set to be released in the spring, thanks to some long weekends and the incoming Labor Day Golden Week at the beginning of May".

"The double-digit growth is unlikely to continue for the rest of the year. We expect Q2 to Q4 growth to decelerate and stay within the range of 4 to 7 percent," Wang added.

She said exports, being the main driver of growth in 2020, will continue their momentum in 2021, but room for further growth is limited due to the high base, which will drag down the overall GDP growth in the coming quarters.

Other factors that could slow down the future pace of growth include job security and consumption.

"The job security issue is worrying," Wang said, explaining that many companies could freeze new hiring to contain costs as surging prices in raw materials add to their woes. This could stymie the income growth prospects. "Consumers are more likely to save for rainy days rather than spending."

The economic recovery in the first quarter of this year continued, with more positive factors emerging, said Liu Aihua, spokesperson for NBS and director general of the Department of Comprehensive Statistics. However, he also cautioned that the COVID-19 pandemic is till around and that the international environment is still complex and severe, thus the foundation for domestic economic recovery is not yet solid.

"The foundations of the domestic economic recovery are yet to be consolidated, and long-standing structural problems remain prominent with new situations and issues arising from our development," Liu confirmed.

She also stressed the importance of further increasing the relief of enterprises, maintaining the continuity, stability and sustainability of macroeconomic policies, and promoting economic stability and recovery.

"Considering the robust recovery, we certainly do not expect Beijing to step up easing measures, but it is also unlikely to make a sharp shift in its policy stance, as the growth recovery continues to face elevated uncertainty from the pandemic and the external environment," Lu noted.