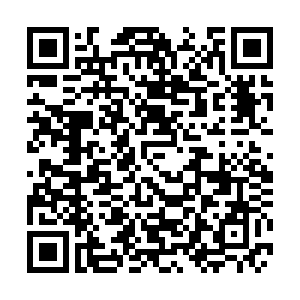 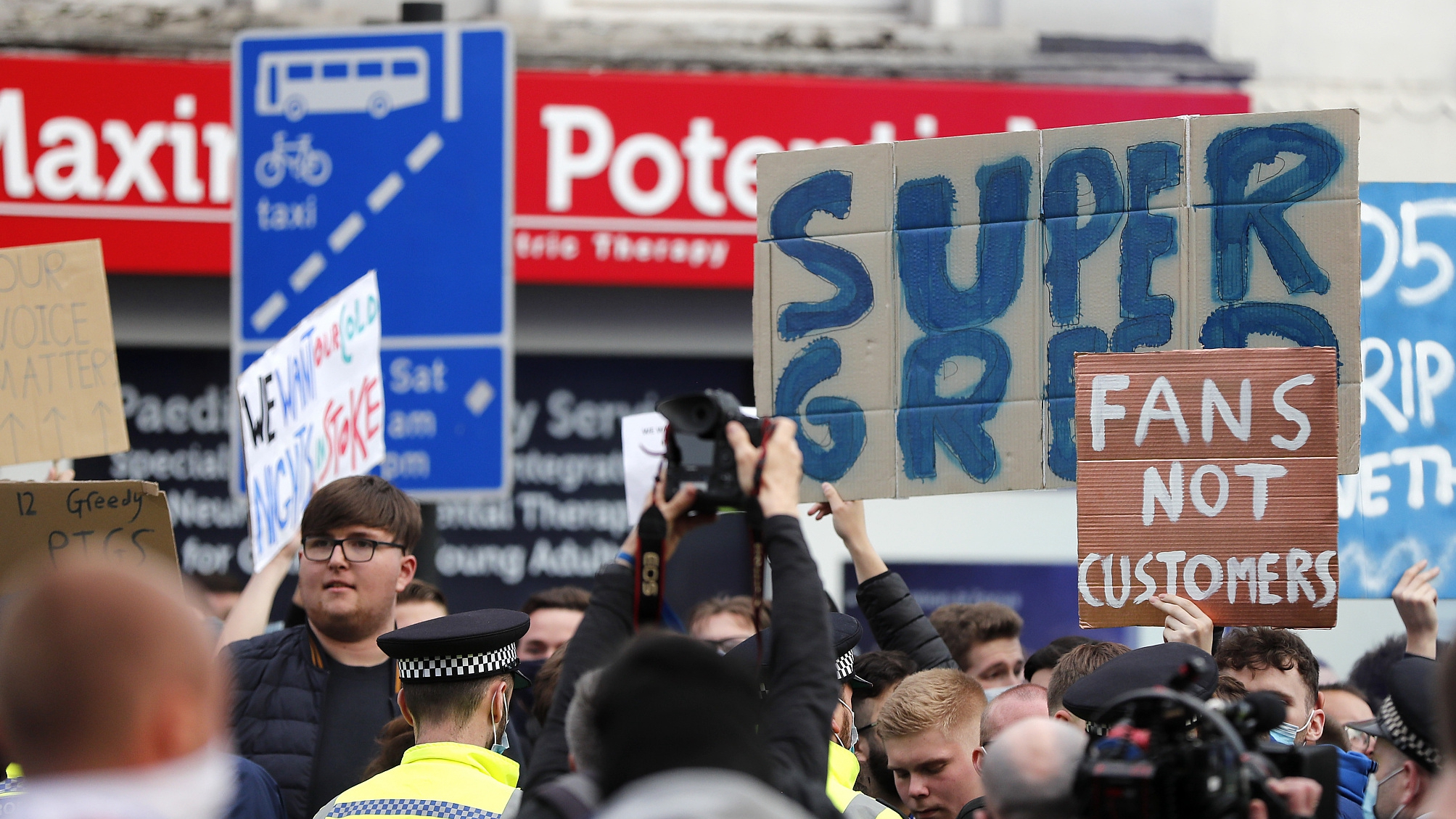 Fans protest against the newly proposed European Super League prior to the Premier League match between Chelsea and Brighton at Stamford Bridge in London, England, April 20, 2021. /CFP

Fans protest against the newly proposed European Super League prior to the Premier League match between Chelsea and Brighton at Stamford Bridge in London, England, April 20, 2021. /CFP

The aloof leviathans of the world's most high-powered clubs begged for forgiveness from the same close-knit group of people they had so cruelly snubbed, betrayed and incapacitated in the last 48 hours.

"We got it wrong, and we want to show that we can put things right," said Manchester United co-owner Joel Glazer, who rarely grants interviews during his stint in charge of the Premier League giants but felt the need to intervene after the backlash against the European Super League grew increasingly more vociferous and damaging.

"Although the wounds are raw and I understand it will take time for the scars to heal, I am personally committed to rebuilding trust and learning from the message you delivered with such conviction," added Glazer in a open letter released on Wednesday.

"In seeking to create a more stable foundation for the game, we failed to show enough respect for its deep-rooted traditions – promotion, relegation, the pyramid – and for that we are sorry," he concluded. 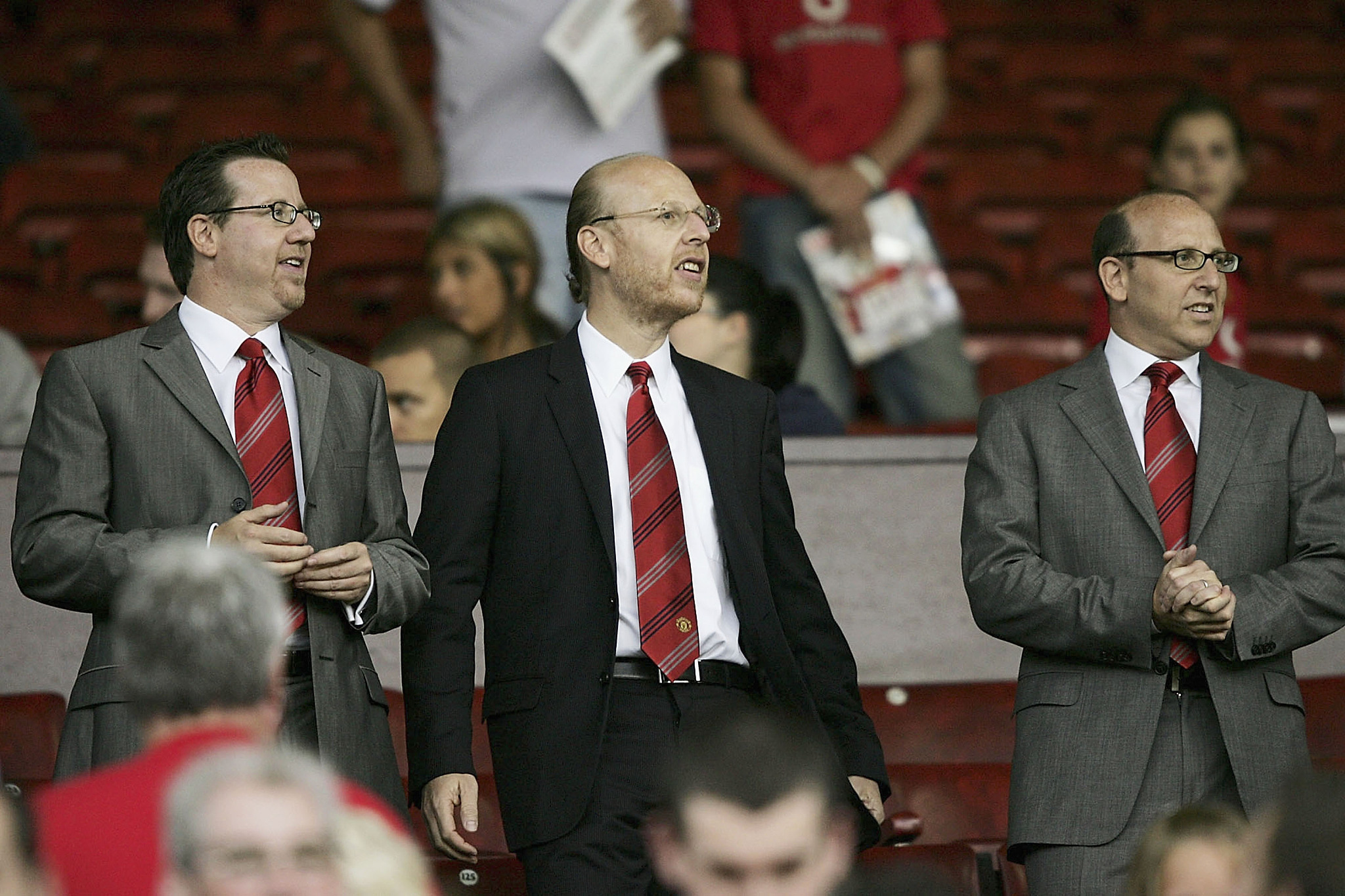 Manchester United co-owner Joel Glazer (r) has penned an open letter to supporters amid fierce backlash to the controversial plans to form a Super League. /CFP

Manchester United co-owner Joel Glazer (r) has penned an open letter to supporters amid fierce backlash to the controversial plans to form a Super League. /CFP

Glazer was not alone. United's city rivals Manchester City also attempted to placate disgruntled supporters as CEO Ferran Soriano admitted that the club "failed to remind ourselves of the unbreakable link between the passion of our fans and the right to have the opportunity to earn success."

Liverpool's principal owner John W Henry went even further as he directly apologized to manager Jurgen Klopp, players and fans on camera "for the disruption I caused" and took responsibility for the Super League fiasco.

"They were the most disrupted and unfairly so. This is what hurts most. They love your club and work to make you proud every single day... And I hope you'll understand that even when we make mistakes, we're trying to work in your club's best interests. In this endeavor, I've let you down," Henry said in a video published on Liverpool's official website.

"Again, I'm sorry, and I alone am responsible for the unnecessary negativity brought forward over the past couple of days. It's something I won't forget. And shows the power the fans have today and will rightly continue to have," he added.

However, the rhetoric of regret has failed to appease fans, who refused to make peace with what happened in the last few days. 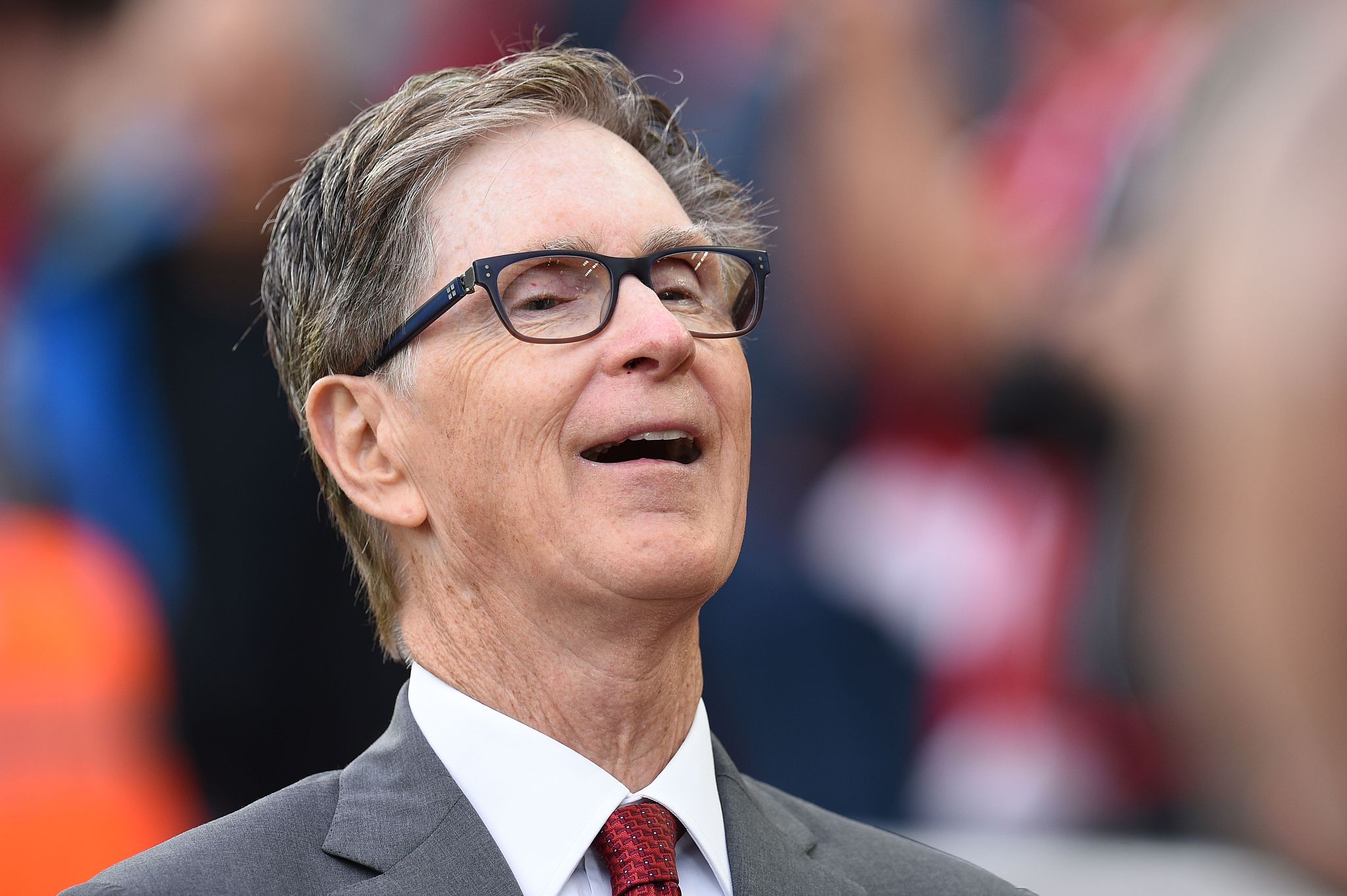 Liverpool's principal owner John W Henry issued a message to supporters, admitting that they got it wrong over the Super League project. /CFP

Liverpool's principal owner John W Henry issued a message to supporters, admitting that they got it wrong over the Super League project. /CFP

A spokesperson for Manchester United Supporters' Trust was quoted as saying by the Guardian, "We all know until they felt forced to withdraw they were determined to proceed with their Super League project regardless of opposition. Ultimately Joel's silence since 2005 says more than this message. We cannot just carry on as if nothing has happened. This is a watershed moment and we need to see genuine change as a result."

The sentiment was echoed by Joe Blott, chair of the Liverpool fan group 'Spirit of Shankly.' He announced that Henry's message felt "very weasel-word-like" and insisted the club owners "are not sorry. The only reason they are sorry is because they have been caught out yet again."

While the breakaway Super League has become the great fault line of European football, the mastermind of this ambitious project remains bullish despite the withdrawals of more than half of its founding members, including Inter Milan, Atletico Madrid and six English powerhouses.

"The Super League project is still on stand-by," Real Madrid President Florentino Perez defiantly told Spanish media outlet El Larguero. "Real Madrid, Barcelona, Juventus and AC Milan are still in talks to find solutions. If this project didn't work, another one will. Remember, all the 12 clubs have signed a binding contract."

"I am a bit sad, disappointed. We have been working three years on this project, on fighting the current financial situation in Spanish football. It is easy to understand – you cannot touch La Liga, so you look for more money midweek and UCL format is obsolete," he added. 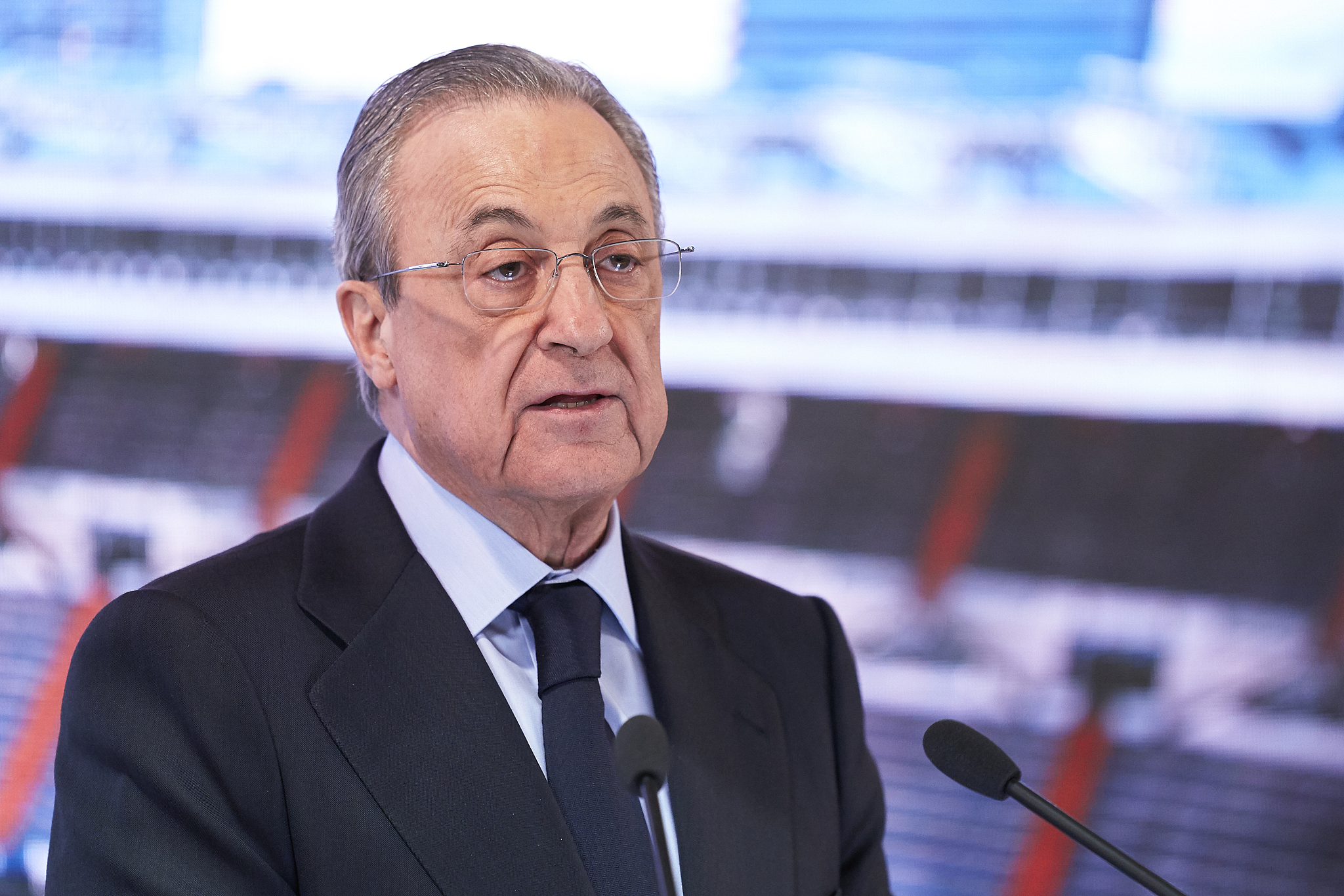 Perez, who is also the chairman of the European Super League, then pointed finger at football's governing bodies and other established forces in the industry.

"I have never seen aggression greater on the part of the president of UEFA and other presidents of Liga. It was orchestrated, it surprised it all. Never seen anything like it – insults, threats, as if we had killed someone, killed football."

"We are just working on saving football, after this pandemic. We have worked very hard on something that would satisfy everyone – and we did expect such a response. There was a campaign, totally manipulated, that we were going to finish the national leagues. That we were ending football, it was terrible. But we were working for football to survive."

For now, the cathartic unraveling of the widely condemned Super League is expected to continue as UEFA President Aleksander Ceferin and British Prime Minister Boris Johnson are mulling regulations to better rein in the football rebels.

Alas, the doomed Super League is exploring ways to revive. "We shall reconsider the most appropriate steps to reshape the project," its statement claimed.

Even bigger battles could lie ahead.