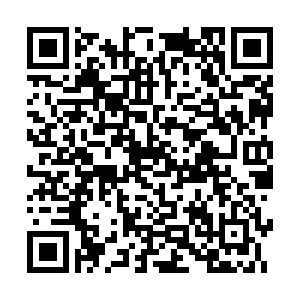 The mission also carried out the country's first interplanetary flight and realized communication over a distance of 400 million kilometers.

Xu Hongliang, a spokesperson for the CNSA, said China's Mars mission not only left the first Chinese footprint on the planet, but also successfully carried out Mars orbiting, landing and rover exploration in a single mission.

After some 30 Martian days on Mars, Zhurong, the Chinese rover had moved some 80 meters from its landing site by Friday.

Liu Jianjun, chief designer of the ground application system of the Tianwen-1 probe, told CGTN that it's decided that Zhurong would head south from its landing spot.

"We selected this particular direction for several reasons. The altitude picks up that way, from the ancient martian ocean to land. And that's also where we'll come across some of the most interesting things we care about, like mud volcanoes and sub-surface ice."

Sun Zezhou, chief designer of the Tianwen-1 probe, said the probe is in "better condition than expected", and said part of that state comes from a stretch of good weather. "We are lucky in having such good weather, which contributes to the mission's state."

"But it's almost certain that it will run into extreme weather conditions like sandstorms," he said. "But we are all prepared for that."

In case of extreme weather conditions like heavy sandstorms, Zhurong could go into the sleep mode and restart later when conditions become bearable again.

Extensive international cooperation has also been carried out during the Tianwen-1 Mars mission, said Xu.

It is currently working with the U.S. space agency NASA and the ESA to exchange orbital data for the safety of the orbiter which now serves as a relay communication satellite in the parking orbit.

Communication for cooperation on the mission's data application is also underway with space agencies from France, Austria and Russia.

"It is an international practice to carry out cooperation in lunar and deep space exploration," said Xu.

In the next stage, no matter for the lunar or asteroid exploration programs, as well as the recently announced International Scientific Lunar Station construction, "China will keep an open attitude and engage in extensive cooperation with its international counterparts, upholding the principle of wide consultation, joint contribution and shared benefits," added Xu.