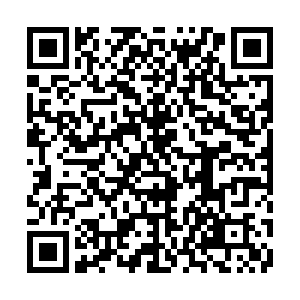 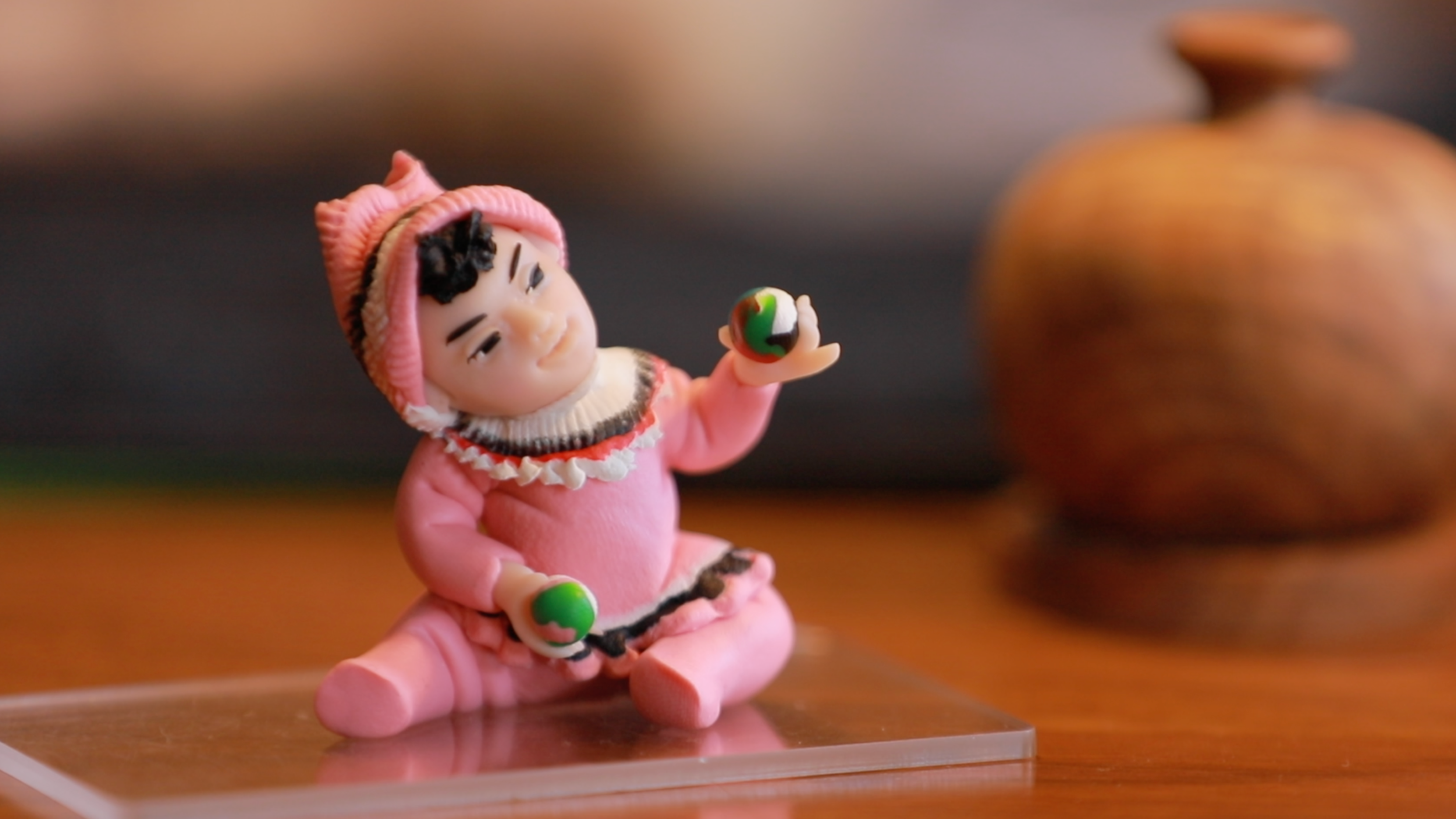 What do Goku from the Japanese manga Dragon Ball and China's top epidemiologist Zhong Nanshan have in common? They are both figurines in artist Lang Jiaziyu's studio.

Lang is from the Gen Z cohort in China, but his profession is different from those of his peers – he is a master craftsman of dough figurines. The art form is thousands of years old and native to Beijing, but Lang is trying to get more people interested in this intangible cultural heritage with the help of pop culture.

Mentioned in records dating back to the Han Dynasty (202 B.C.-AD 220), dough figurines are made of a staple food item – wheat flour, sifted, mixed with salt and honey and steamed. During hard times such as war and famine, making dough figurines was a way of living for many, as with other age-old handicrafts. But over the decades, these folk traditions have faded into the modern jungle.

Among China's 764 traditional crafts, a little over half of them are in danger of disappearing. Few young people even know about them, let alone devoting a lifelong career to the heritage. Learning them is getting harder as nearly 1 in 10 intangible cultural inheritors at the national level have passed away. Most of the new inheritors learn from their families. Lang is one of them.

The "Beijing Mianren Lang" – a type of dough sculpture art listed as a national intangible cultural heritage in 2008 – has a tragic yet enchanting history. Lang's grandfather, Lang Shao'an, was born in 1910 to an ethnic Manchu family that lived on a salary given by the empire.

When the Qing Dynasty (1644-1911) declined in the early 1910s, the Lang family had to survive on their own. Lang Shao'an, during his teens, was forced to work at a factory in nearby Tianjin but escaped back home after he was viciously beaten by a few co-workers. While he was wandering the streets, he found joy and solace in watching a craftsman make dough figurines. Since then he supported his entire family by making such figurines.

As his skill gained renown, Lang Shao'an was invited to exhibit his art in the UK in 1956, subsequently traveling to 11 countries. With an established reputation, "Mianren Lang" was a success story in those years.

Things took a dive in the early years of reform and opening-up. The fast-forward economy drove people to take on more "modern" jobs, especially those in industries such as manufacturing. In the 1980s, Lang Jiaziyi's father (the youngest son of Lang Shao'an) had to take a "formal" job to make a living and also to sustain his passion for "Mianren Lang." 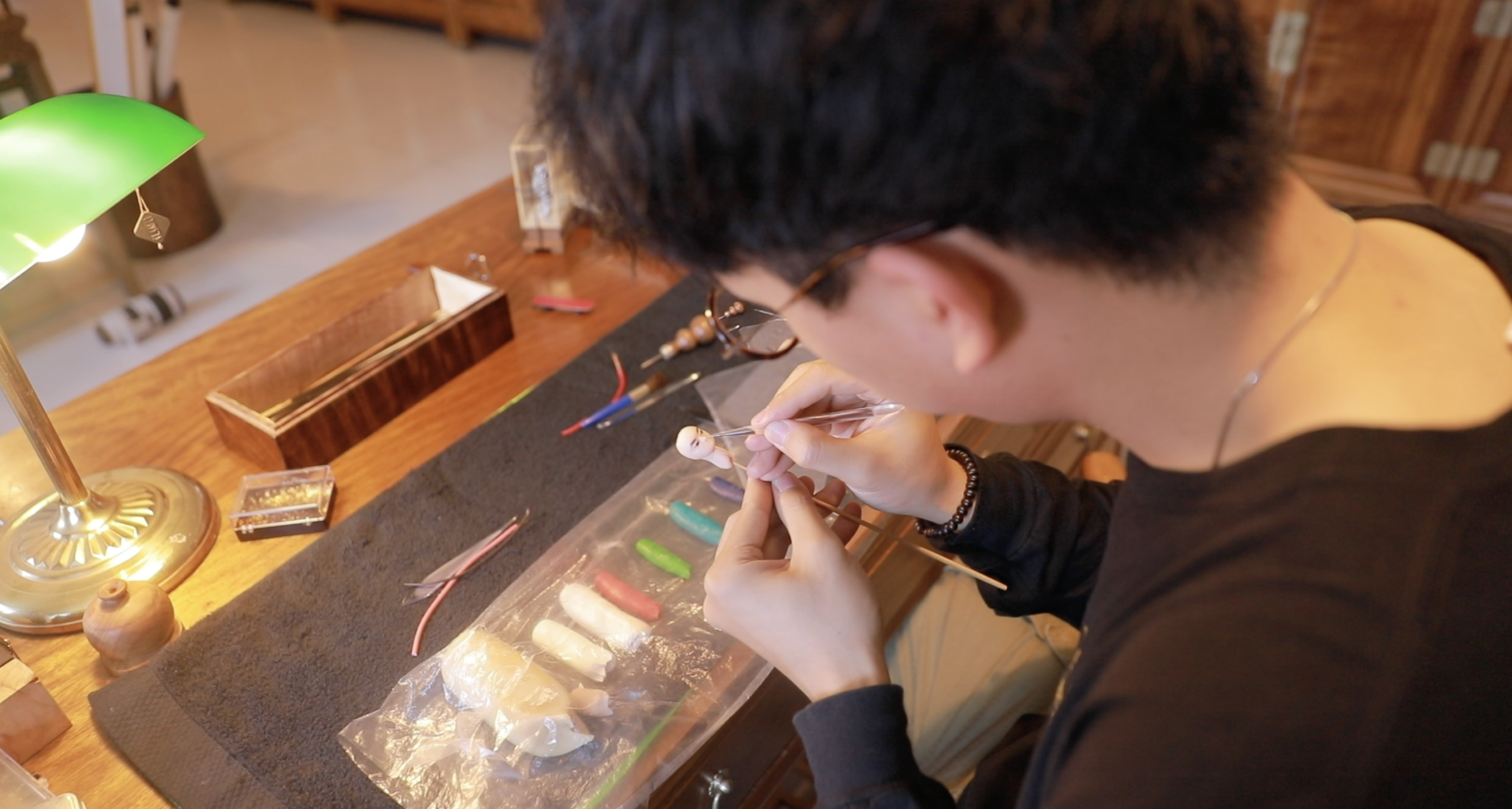 Lang Jiaziyu is making a dough figurine in his family studio in Beijing, June 11, 2021 /CGTN

Lang Jiaziyu is making a dough figurine in his family studio in Beijing, June 11, 2021 /CGTN

"When I was a toddler, I found it fascinating to rub, twist and knead dough into vivid portraits. Everything is done just on the fingertips," Lang recalled. Finding relish in turning what he saw into little figurines, he's been making dough figurines for over two decades, from his first Doraemon at six years old to Slam Dunk and Marvel characters as a teen to self-portrait figurines as an adult.

"I'm trying to integrate elements here and now, elements of the day, into my works." In his studio, it's apparent that Lang is imbuing many of his sculptures with social commentary. You can find doughy depictions of popular memes such as the "Ge You Lie-Down" and the phenomenon of "phone snubbing" when he saw his nomophobia friend. "It reflects the lifestyle and the mentality of my generation, and I want to chronicle the times," he told CGTN in his family studio that contains thousands of artworks from three generations.

Like Lang, Yang Yue, born in 1994, took up engraving a timeless Chinese invention as a career due to her family. "Ever since I could remember, my father was making Beijing Swallow Kites, a national intangible cultural heritage. He often took me to exhibitions showing Chinese folk craftwork. Once at an exhibition, I saw a piece of paper-cutting artwork. It was amazing," Yang recalled. At the age of six, she started to learn paper-cutting. Her father introduced an inheritor of paper-cutting to her three years later; since then, she took classes twice per week.

"To do paper-cutting, all you need is a piece of paper and scissors, and sometimes a pencil and an eraser."

Paper-cutting is one of the country's most fundamental intangible cultural heritage, but in the capital, there are only some 20 inheritors. "My mentor is almost 80 and I was 20-something. There's a huge generation gap." 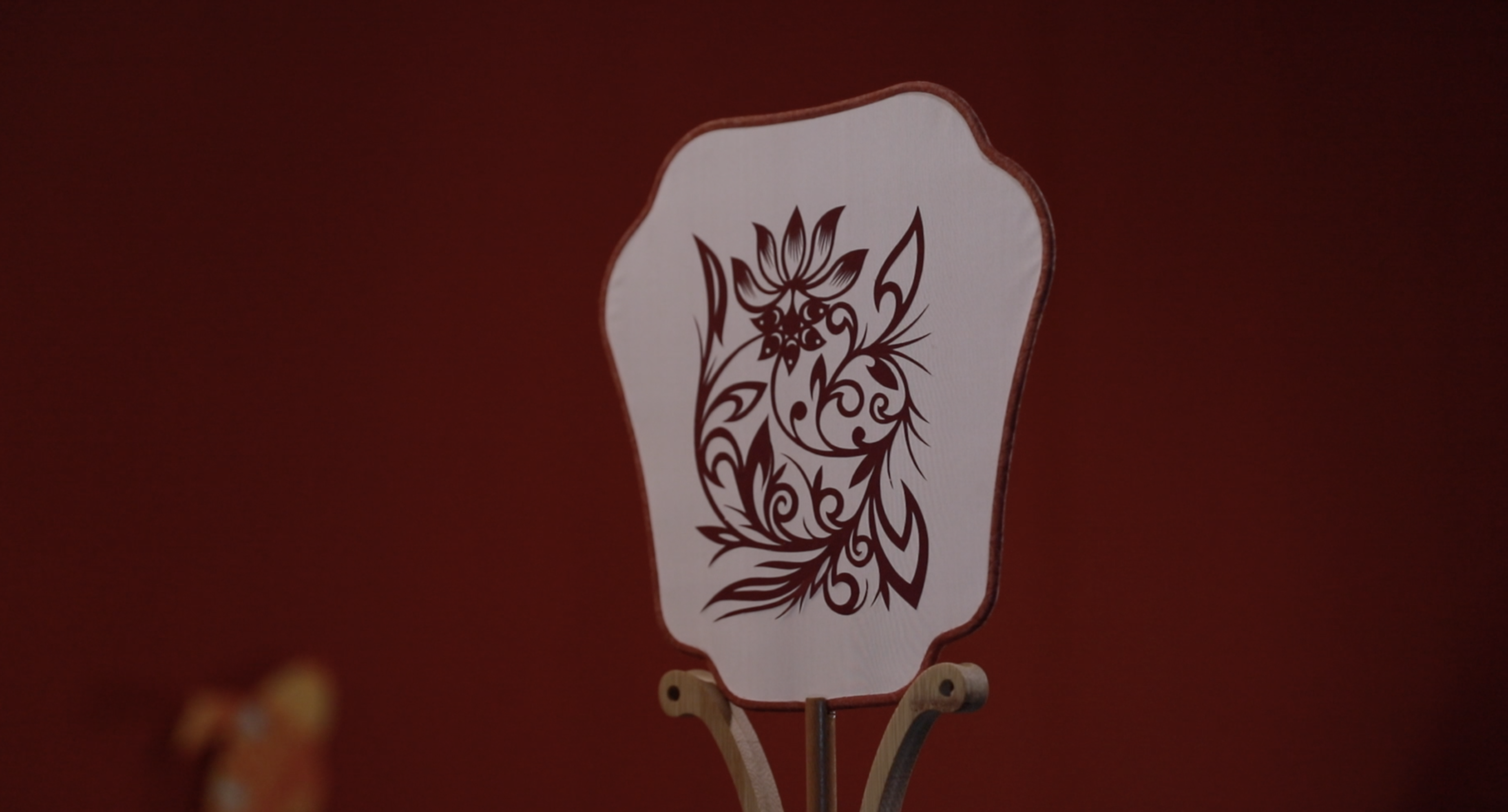 The plight, the prospect

According to UNESCO, China has over 900,000 intangible cultural resources. China identified 3,068 intangible culture inheritors at the national level between 2007 and 2018. The Ministry of Culture and Tourism noted that out of the 1,082 inheritors – the most recent batch identified – only seven of them are below 40 years old, or 0.68 percent.

For instance, an old craftsman of an ancient painted pottery in east China's Anhui once offered a monthly salary of 3,000 yuan to enroll an apprentice, but no one took up the offer, Xiao said during an interview with CGTN.

For Lang and Yang, both their families are worried about their career choices. The prospects for inheritors have been dim in recent decades.

As for inheritors nationwide, most of them tend to be older, so they don't understand how to attract young people to their art. "If they could make their crafts more relevant in innovative ways that appeal to these youth, only then will these traditions touch everyone's lives," Xiao said, who is trying to connect elderly inheritors and the public through his platform.

It's difficult to cultivate mainstream aesthetic appreciation for these folk crafts, Lang observed. "Western culture has subtly infiltrated our life for the past decades. During my graduate study at Peking University's art department, most of my courses were Western art-centric." In terms of dough sculptures, there's long been an academic vacuum.

But the situation has been improving by the year. China has turned culture into a pillar industry in 2011 and ramping up effort to protect cultural heritage. In 2021, a slew of universities set up arts majors in intangible cultural heritage for the first time in the country's history. 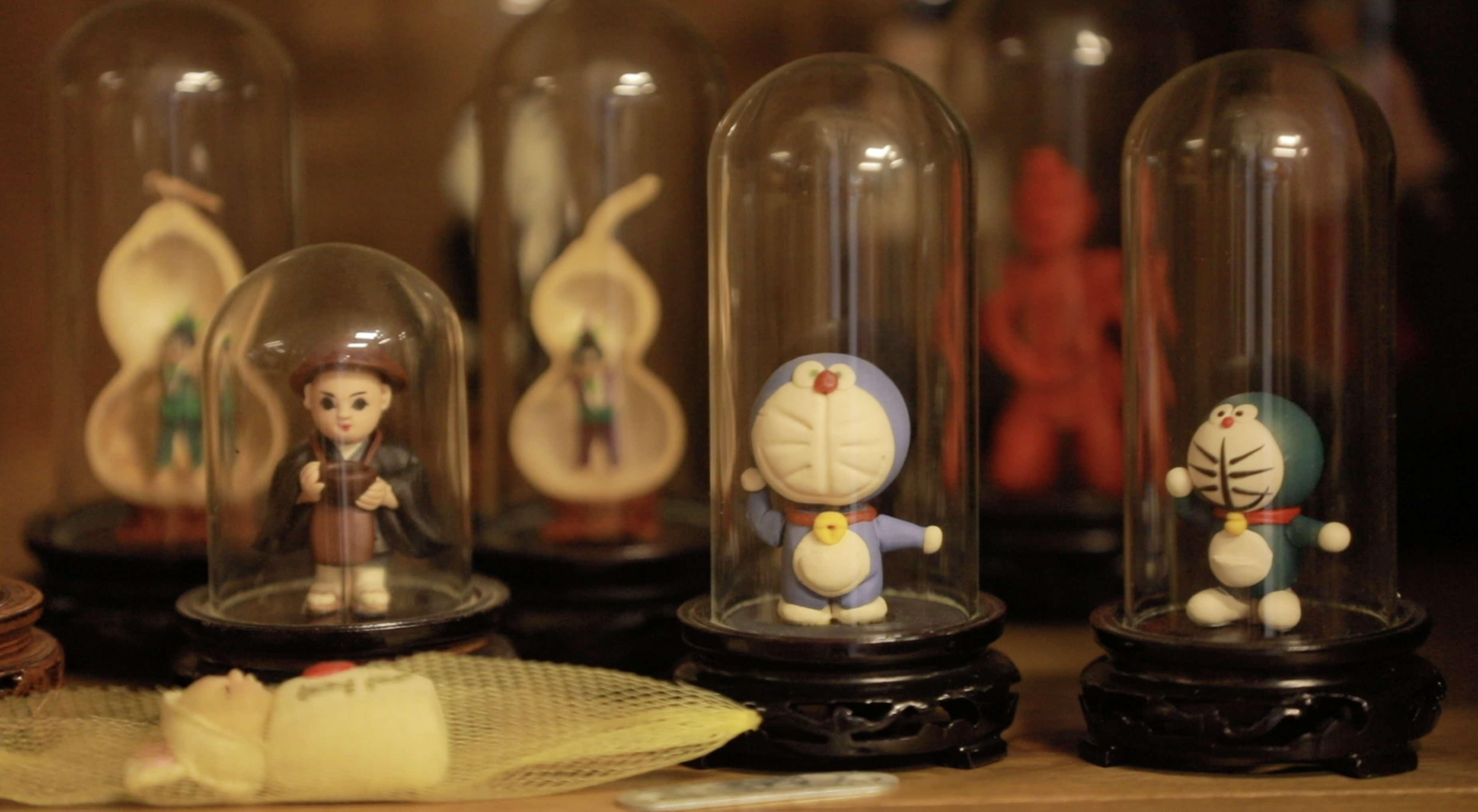 Lang revels in turning his favorite cartoon characters and modern-day people into figurines with his fingertips. But it's very lonely being on this path, he said. There's barely any feedback to help him improve because there are no peers of his age to talk with.

"Some peers may think me very wacky. And there's also no standard for this profession, so I don't know if I'm doing well or not," the 26-year-old mused. But he continues to bring the craft to a wider audience, making short videos showing his craft to post on social media. "My goal is to professionalize crafting. Once it's realized, craftsmen will be able to live a decent life and more millennials and Gen Z will be attracted to pass down the treasure house."

Meanwhile, Yang and her husband are doing their best to popularize Chinese paper-cutting by including it in themed photoshoots, which go down well with Gen Z. Besides, she's giving paper-cutting classes at kindergartens and elementary schools.

Their cause may even be helped by "China-chic," a surge in popularity for traditional Chinese fashion and culture. This revival of sorts is an outgrowth of a growing pride among youth in their own culture, and may even lead to a Chinese cultural renaissance where folk arts and traditions will flourish in a contemporary context.

Maybe such appeal lies in the uncomplicated love for traditions that were once commonplace. Or as Lang put it, "Folk crafts are unrestrained, resilient and close to daily life."