Download
World Refugee Day: How many people were displaced amid the COVID-19 pandemic?
By Hu Yiwei 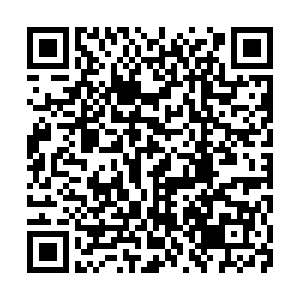 "Wars, violence, persecution, and human rights violations" amid the pandemic led to a record high of 82.4 million people being displaced by the end of 2020, according to the latest data from the United Nations High Commissioner for Refugees (UNHCR).

The total, rising for the ninth straight year and more than doubling the level of a decade ago, represented a full 1 percent of humanity being uprooted and displaced.

The increasing numbers were all the more devastating because COVID-19 restrictions last year had been expected to limit displacement.

"Based on this trajectory, the question is no longer if forced displacement will exceed 100 million people – but rather when," said the report. 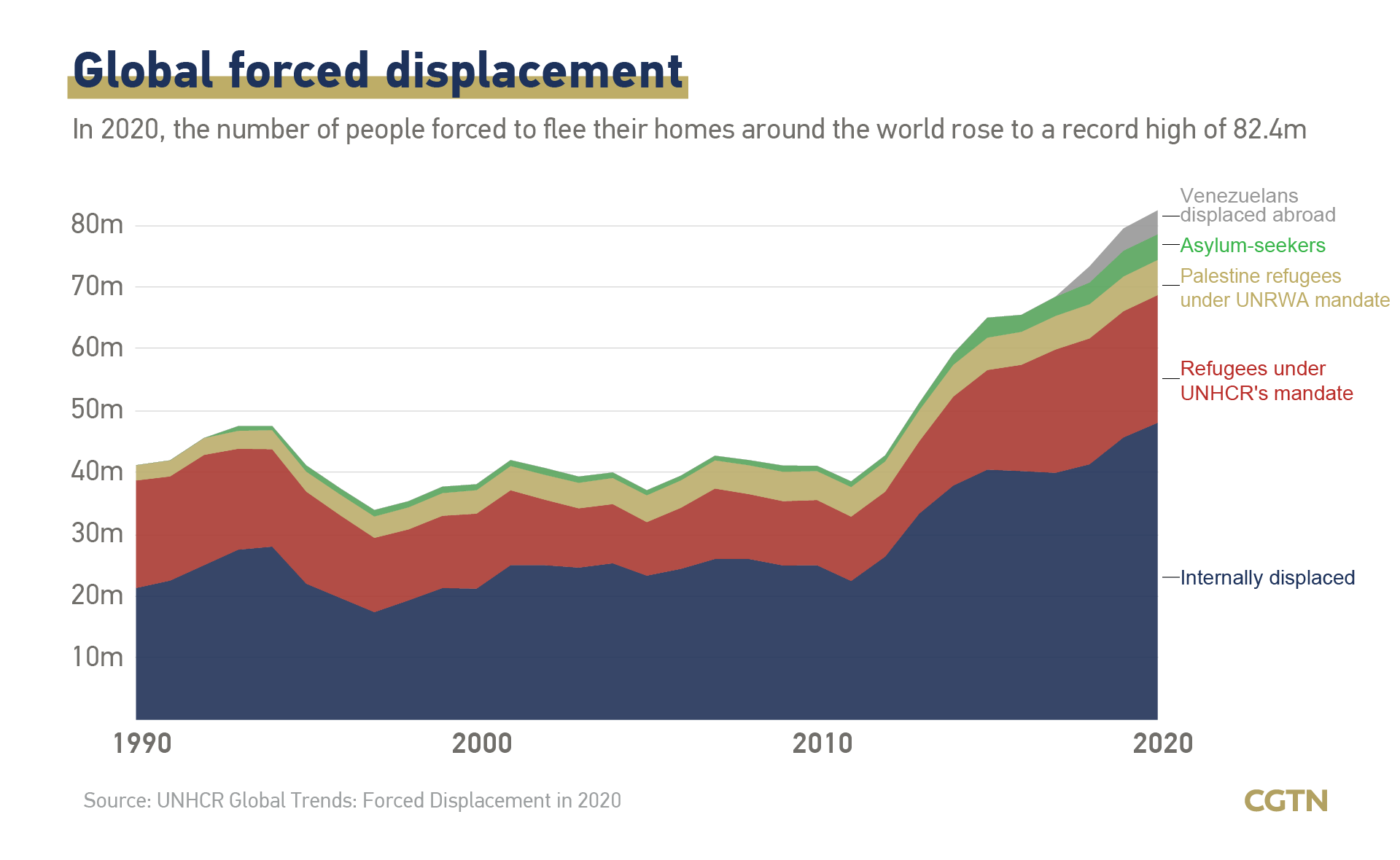 During 2020, an estimated 11.2 million people became newly displaced – exceeding the 2019 total of 11 million – most of which came from a handful of war-torn countries and regions.

They include Syria, which after more than a decade of war counts 13.5 million people uprooted either inside or outside the country – more than half of its population and a sixth of the global displacement total.

Facing COVID-19 at a refugee camp in Syria

The UN is also preparing for a likely further displacement of civilians in Afghanistan after U.S. and international troops leave the country in September, said UNHCR chief Filippo Grandi.

Children are particularly affected during displacement crises, the report pointed out.

Girls and boys under the age of 18 account for nearly half of all forcibly displaced people.

Almost 1 million children were born as refugees between 2018 and 2020. Many of them may remain refugees for years to come. 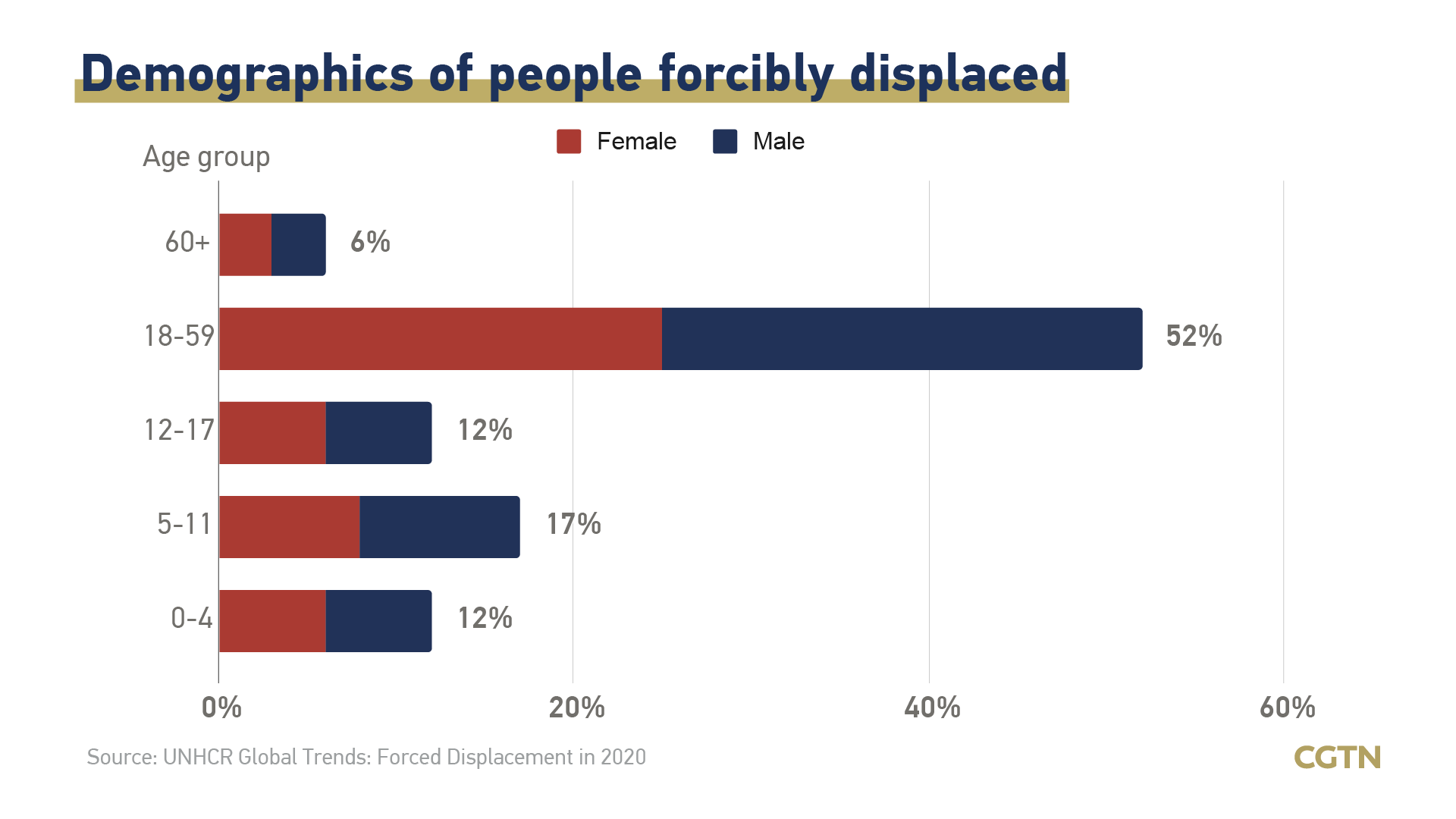 The pandemic also hit the forcibly displaced hard, who faced increased food and economic insecurity as well as challenges to access health and protection services, according to UNHCR.

A survey published on Thursday revealed the pandemic has had a devastating toll on the living conditions of refugees in Uganda, which hosts the largest refugee population in Africa.

Employment rates dropped sharply compared with pre-pandemic levels, and half of the refugees participating in the survey were projected to live under the poverty line.

The share of refugee households that have run out of food was about 65 percent. Refugees were forced to reduce the amount and frequency of meals eaten in a day. 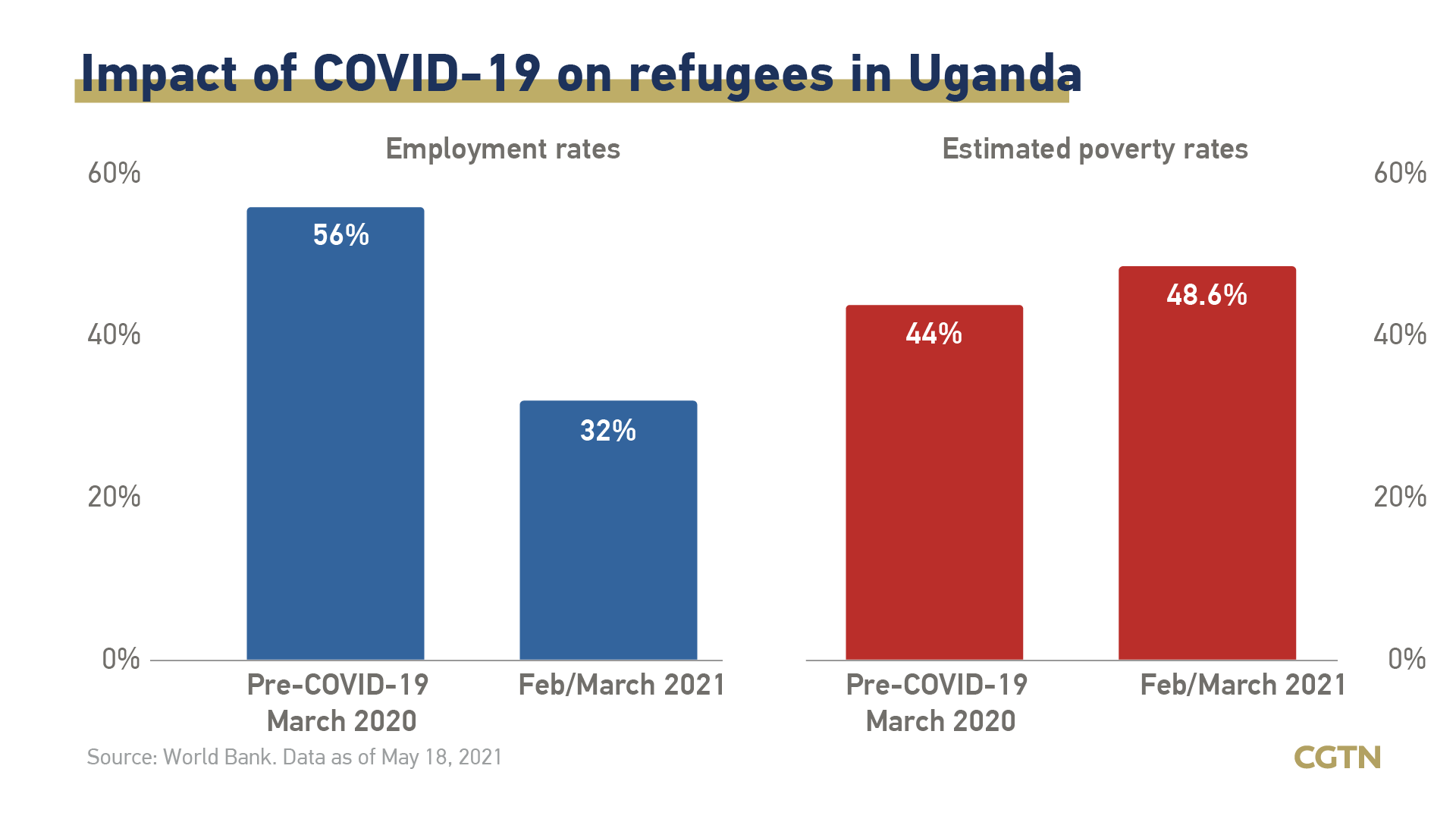 On a global level, "the magnitude and severity of food crises worsened in 2020 as protracted conflicts, extreme weather and the economic fallout of COVID-19 exacerbated pre-existing situations," the report said. The UN body also said the forecasts for 2021 are "equally worrying."

Meanwhile, the World Bank expects the total COVID-19-induced new poor in 2020 to rise to an unprecedented level of between 119 and 124 million.

The UN refugee agency urged world leaders to step up their efforts to reverse the trend of soaring displacement.

Last month, China vowed to provide an additional $3 billion in international aid over the next three years to support COVID-19 response and economic and social recovery in other developing countries.

China had already provided $2 billion before the announcement. In addition, the country has provided free COVID-19 vaccines to more than 80 developing countries in urgent need and exported vaccines to 43 countries. It has delivered over 350 million doses – more than any other country in the world.