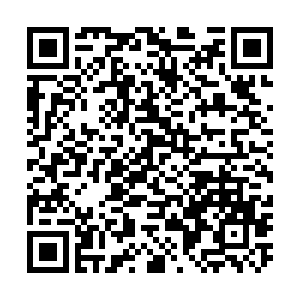 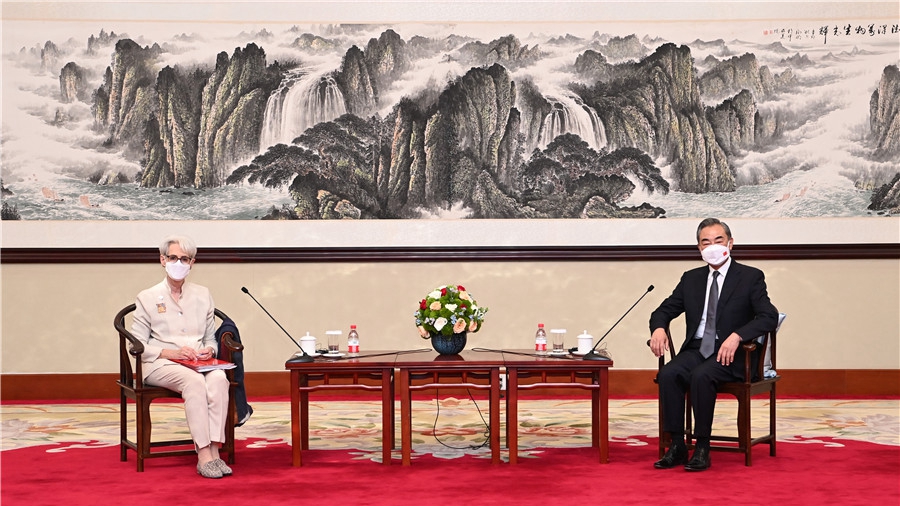 Chinese State Councilor and Foreign Minister Wang Yi on Monday drew three bottom lines on China-U.S. relations and urged the U.S. to follow in order to prevent the bilateral ties from further deteriorating.

The U.S. must not challenge, slander or even attempt to subvert the path and system of socialism with Chinese characteristics, Wang said, stating the first of the three demands. Chosen by history and the Chinese people, China's path and system are matters of Chinese people's welfare and Chinese nation's future as well as core interests that China must firmly uphold, he added.

Secondly, the U.S. must not attempt to obstruct or interrupt China's development process, Wang said. The Chinese people have the right to live better lives and China has the right to modernize, as modernization is not an exclusive right of the U.S., he said, urging the U.S. to remove all unilateral sanctions, high tariffs, long-arm jurisdiction and technology blockade it has imposed on China as soon as possible.

China's third demand is that the U.S. must not infringe upon China's state sovereignty or damage China's territorial integrity, Wang said, referring to issues surrounding China's Xinjiang, Tibet, Hong Kong and Taiwan. These issues have never been about "human rights" or "democracy," but concerning "Xinjiang independence," "Tibet independence" and "Hong Kong independence." No country will allow its national sovereignty and security to be compromised, he reiterated.

As for the Taiwan issue, Wang said it's even more important. He said the fact that both sides of the Taiwan Straits belong to one and the same China and Taiwan is part of China has never changed and will never change. If "Taiwan independence" forces dare to provoke, China has the right to take any necessary measure to stop it, Wang said, urging the U.S. side to honor its commitment on Taiwan issue and act prudently. 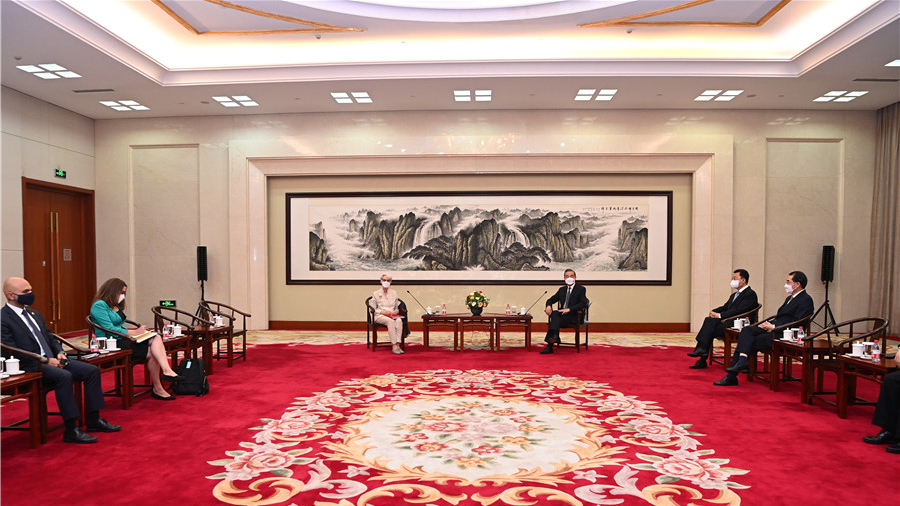 No intention to replace the U.S.

The Chinese foreign minister expressed China's firm opposition to the extreme and erroneous foreign policy the new U.S. administration had adopted towards China, and said a wrong perception of China was the fundamental reason behind. The U.S. views China as its primary rival and tries to impede and disrupt China's modernization drive, he noted, reaffirming that "such an attempt is doomed to fail for now, and even more so in the future."

China's development, driven powerfully from within, is a trend of historical evolution, Wang made it clear to the U.S. side, underlining that socialism with Chinese characteristics totally fits China's national realities. "The great rejuvenation of the Chinese nation has entered an irreversible historical process, which cannot be held back by any force or country."

Reiterating China's commitment to the path of peaceful development and an open strategy of win-win cooperation, Wang reassured that China will never tread the beaten track of big powers in seeking hegemony. China is willing to realize common development and prosperity with all countries including the U.S., he added.

According to Wang, China's development is aimed at seeking happiness for all Chinese people, rather than challenging or replacing the U.S.

"We take no interest in betting on winnings or losses of the U.S. side. China's development is not based on the premise of U.S. decline."

Noting that China and the U.S., as the world's largest developing country and developed country, respectively, cannot replace or defeat each other, Wang called for settling differences through dialogue.

"We have a clear view on where China-U.S. relations are headed, that is, to find a way for two major countries with different systems, cultures and stages of development to coexist peacefully on this planet through dialogue," the Chinese foreign minister stated.

It would be even better if it could be mutually beneficial, Wang said, adding that this is a good thing for both China and the United States and a great boon for the world. "Otherwise, it would be a catastrophe."

He hoped the U.S. will abandon its arrogance and prejudice, stop acting as a preacher and return to a rational and pragmatic China policy based on an objective and correct understanding of China.

Sherman, for her part, recognized China-U.S. relations as the most important bilateral relations in the world. She said that the U.S. under President Joe Biden's administration, has had several engagements with the Chinese side.

The U.S. side is willing to continue frank discussions with China, said Sherman, adding that the U.S. also hopes that the two countries can coexist peacefully.

Sherman called for healthy competition between the two sides, and suggested the two sides can cooperate in climate change, drug control and international and regional hotspot issues.

She also echoed Wang's words by saying that the two sides should strengthen crisis management capacity and avoid conflicts.

As two major countries, the U.S. and China can communicate and discuss in a responsible way even if they have differences, Sherman noted, hoping that both sides will take joint actions to improve bilateral relations.

Sherman reiterated the U.S.'s adherence to the one-China principle and stated that the U.S. does not support "Taiwan independence."