Download
The road to Xiaokang: 52 first secretaries on the last strongholds of poverty 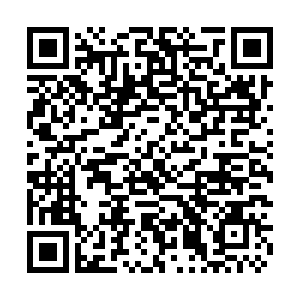 China has wiped out extreme poverty by 2020 and completed the goal of building a moderately prosperous society in all respects in 2021, marking the culmination of a 2,500-year journey of the Chinese people to pursue xiaokang - a peaceful and happy life. As of February 2020, the number of impoverished counties has decreased from 832 to 52 -the last "tough nuts" along the road. Fifty-two first Party secretaries were sent to these areas to fight on the last strongholds of extreme poverty.

Among the 52 first secretaries, there were ethnic minority officials who worked in their sixties, female secretaries who brought their kids with them to the village -and even those who unfortunately laid down their lives there. CGTN dispatched 19 reporters to search for and talked with them in person or via video link during the COVID-19 pandemic, drawing a panorama of these frontline workers. Through the lens, we saw the beds they slept in, the people they talked to, and the environment they worked in. We saw them smiling, thinking or crying. Some of them chose to stay with the villagers to seek a better life together after they were lifted out of poverty. [See H5 link] 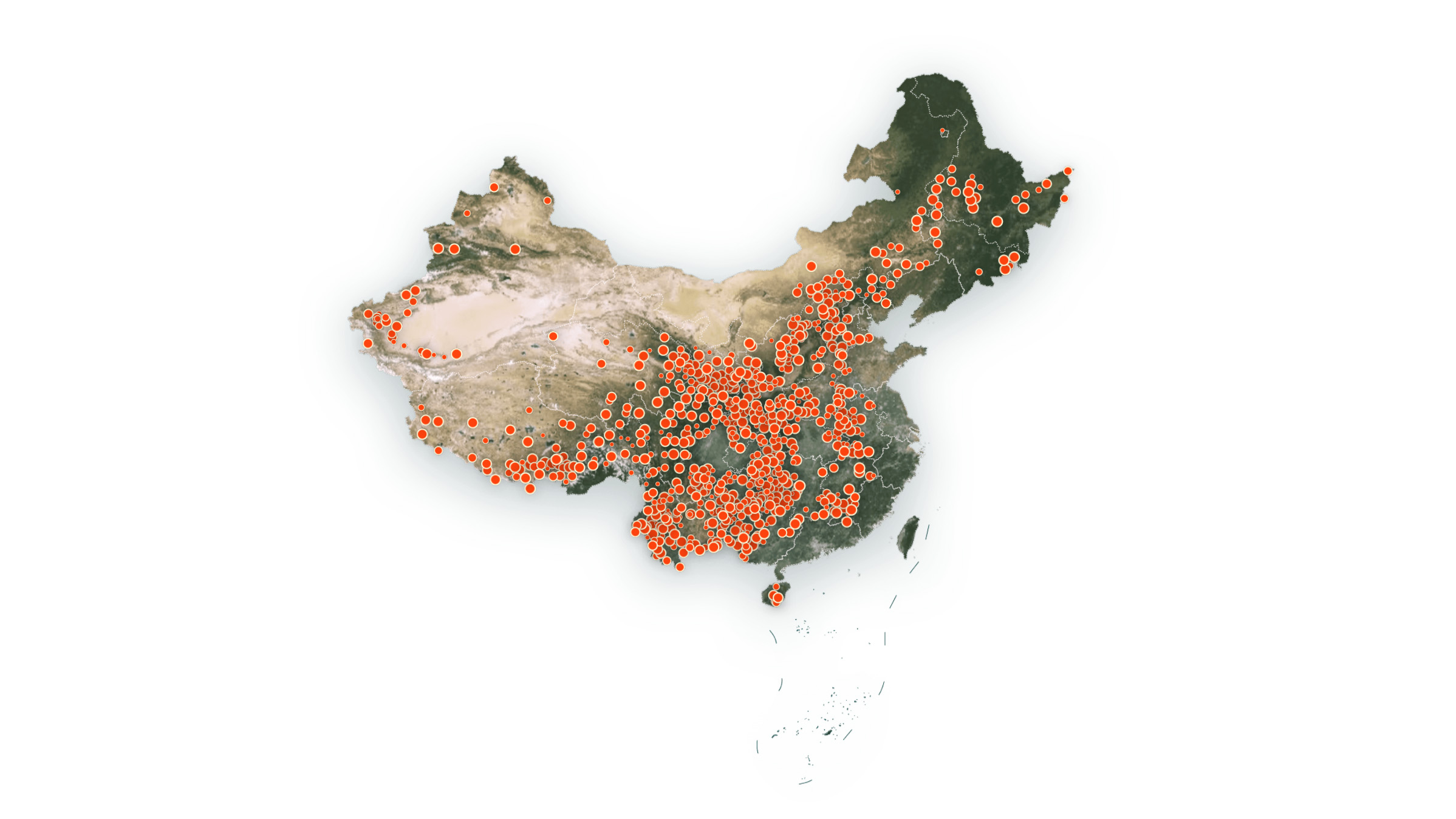 The first secretaries, including nine females and nine from ethnic minorities, took root in the remote areas, and began to learn the status quo of these areas.Why in the end were they in poverty? Could the long-lasting poverty be alleviated with their input in several years? This has brought them great challenges. Some of them turned from a male nurse to a plant specimens maker; some, originally a reporter, came to witness mudslides in the mountains, and some, from being a lawyer, came to work to revitalize local culture. 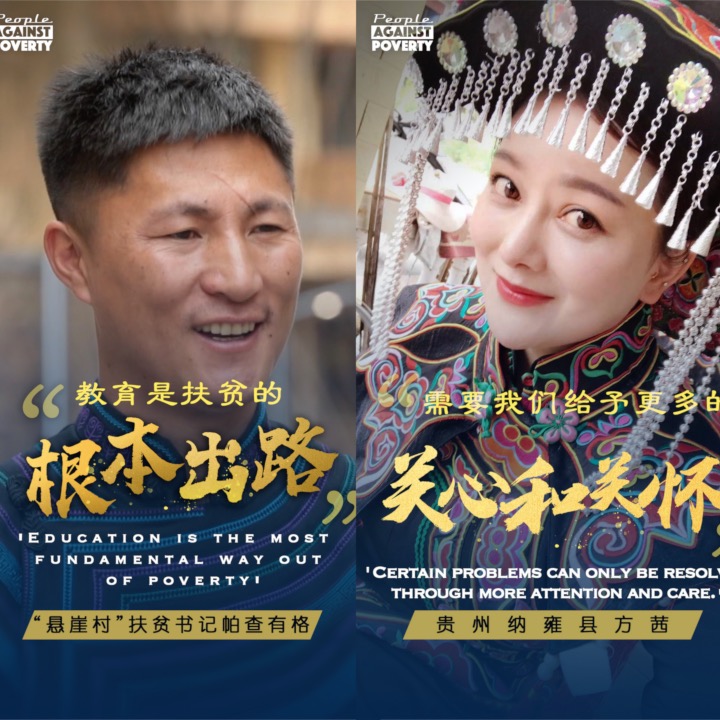 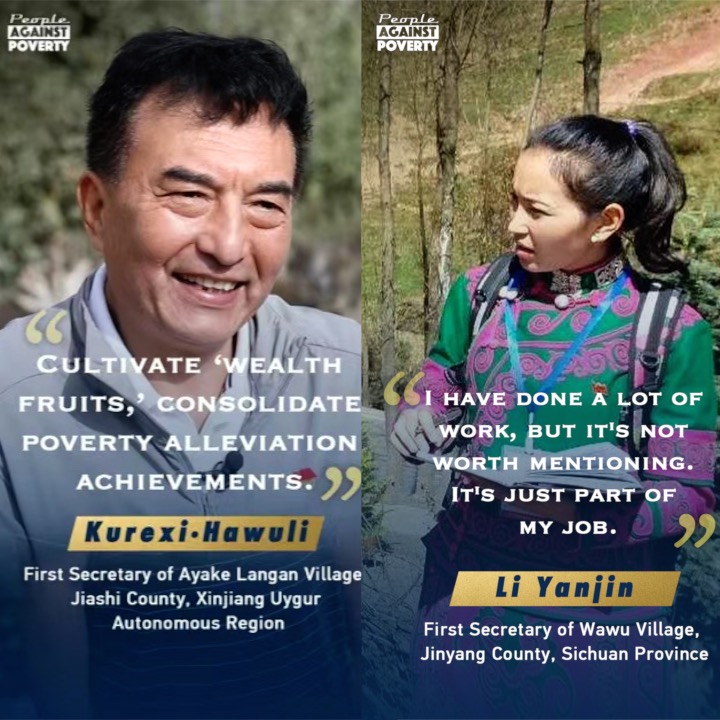 "Patient work can raise a flower of happiness"

Qin Zhenbang, then 57-year-old, took the task of working as the first secretary of “the muddy village” in northwest China’s Ningxia Hui Autonomous Region when he was about to retire from the bank in 2016. Villagers here relied on growing wheat and potatoes for their livelihoods. But due to soil erosion, they could hardly get seeds back. After visiting surrounding towns and villages, Qin found that raising cattle might be a better way out. He noticed that the price of beef was also rising. Qin persuaded villagers to breed cattle, helped them apply for microloans and instructed them to grow forage grass. 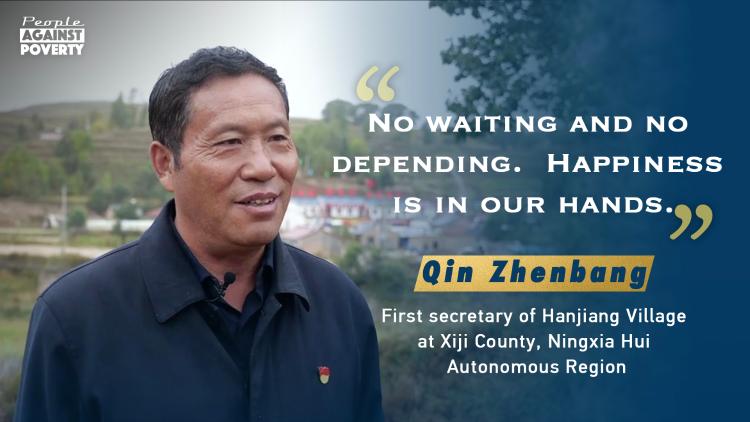 In September 2020, "the muddy village" was lifted out of extreme poverty.

It was at that time, people came to know the real name of the village - Hanjiang Village.

"In the poverty alleviation fight, as long as your work is patient enough, you can raise a flower of happiness in the hearts of the people." Qin said.

In northwest China's Gansu Province and Ningxia Hui Autonomous Region, there were around 390,000 first secretaries and poverty alleviation staff like Qin Zhenbang.

The "she" power in poverty alleviation

In the tough and decisive work of China's poverty alleviation, there is a force that cannot be ignored - soft but resilient - the "she" power.

Huang Wenxiu was a Party secretary tasked with poverty alleviation in Baini Village, Leye County, south China's Guangxi Zhuang Autonomous Region. On June 17, 2019, the 30-year-old died in a flash flood on her way back to the village. During her stay in the village, which lasted for over a year, she led 418 villagers out of extreme poverty.

Thousands of female poverty alleviation staff like Huang Wenxiu worked on the frontlines to cope with issues in transportation, farming, education, and so on.

Fang Qian, who worked as first secretary in Xinfang Township of southwest China’s Guizhou Province, told her 3-year-old son, "Mom is building a road. When the road is as good as the one at our door, those children will be able to go to school like you."

Fang said she felt sorry when her son wondered why she would left him for so long, but she could not leave the villagers, who took her as their own daughter or mom.

Guizhou was once a province with the largest impoverished areas, the deepest degree of poverty, and the biggest impoverished population in China.Underdeveloped transportation, low level of urbanization and poor ecological conditions are deeply-entrenched in this area.In order to help the villagers develop chicken breeding industry, Fang went to the nearby town to buy chicks. On the way back, she was kept with the chicks in the car for eight hours. 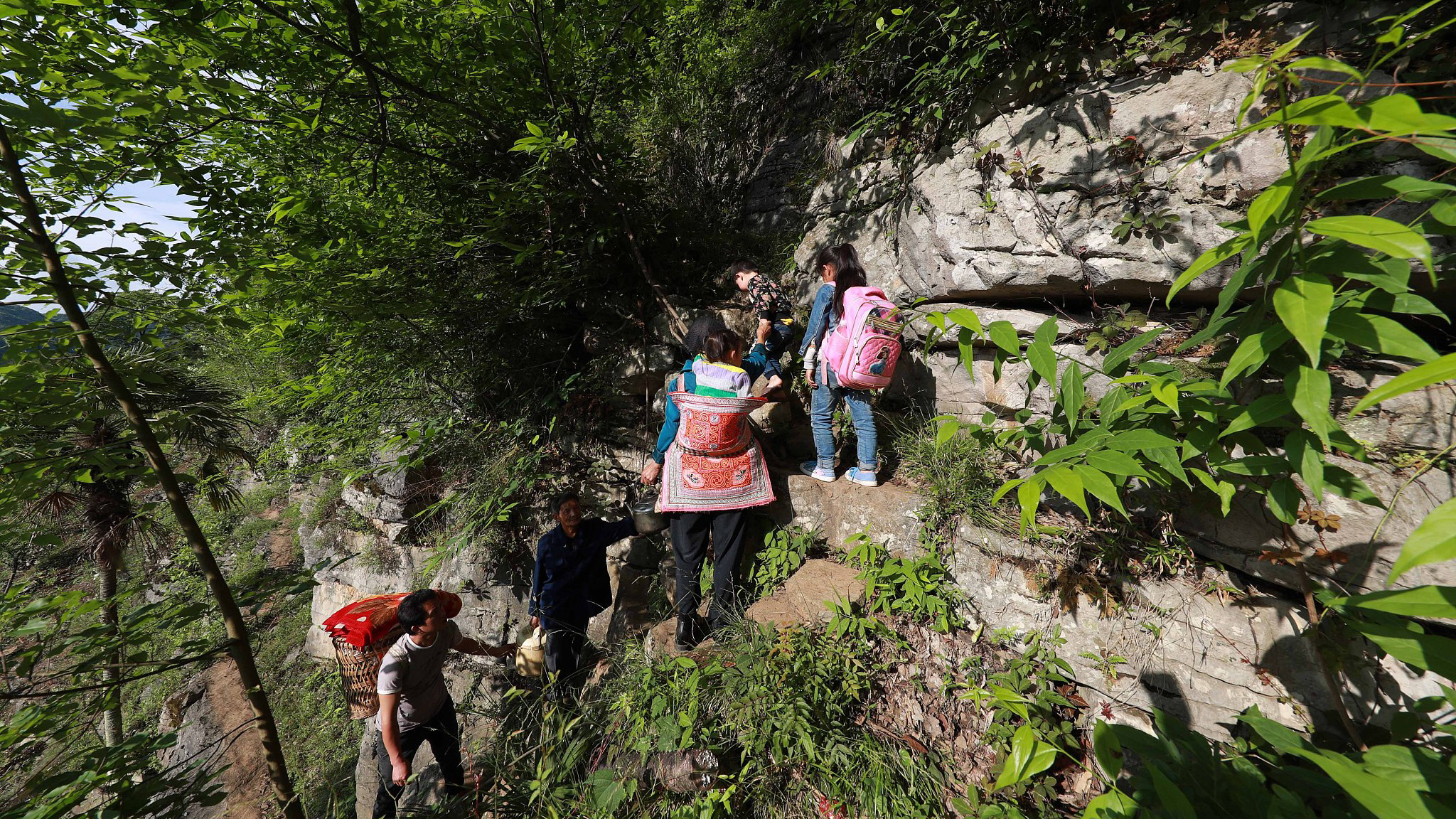 "The air in the car was so bad," Fang said, smiling, "that when I got off the car, I vomited." Fang believes while something can be taken care of with money, some can only be handled with heart.

Zhao Yaqin, first secretary of Tantu Village in northwest China's Gansu Province, made a different decision from Fang when it came to their shared role - as a mom. After two years of working in the village, Zhao brought her son with her in 2020 after consulting with her husband. 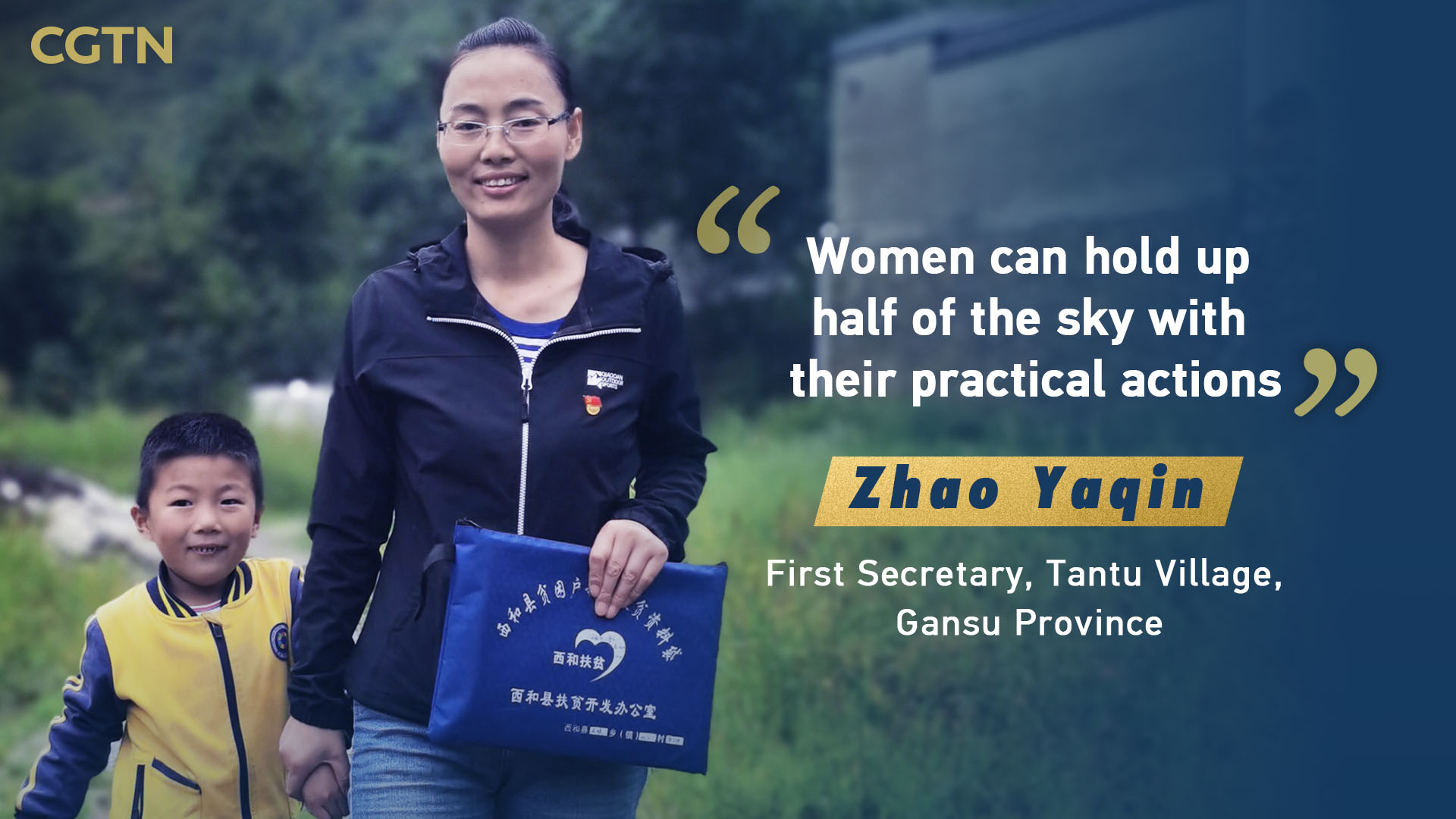 According to Zhao, women with children at home have much difficulties to work outside and are largely ignored. They feel deeply upset with little confidence. Zhao Yaqin took her son with her while visiting these villagers, telling them, "See, as a staff member, I brought my child with me. Women can still go outside with children in tow."

Zhao said as the first secretary, it is important to promote tangible things like infrastructure, industrial development and public services, but what's more important is something invisible.

With the company of her son, Zhao said she also became more aware of the urgent need of those children left behind.

Mental loneliness is the biggest problem. "The biggest fear is that when your body is moving forward, your soul is not keeping up."