Download
Explainer: Why Chinese EV companies are using Norway as a global pilot
By Zhang Xinyuan 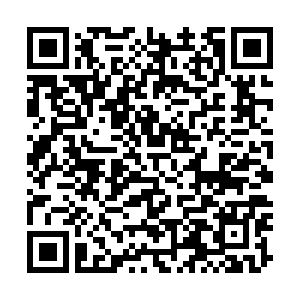 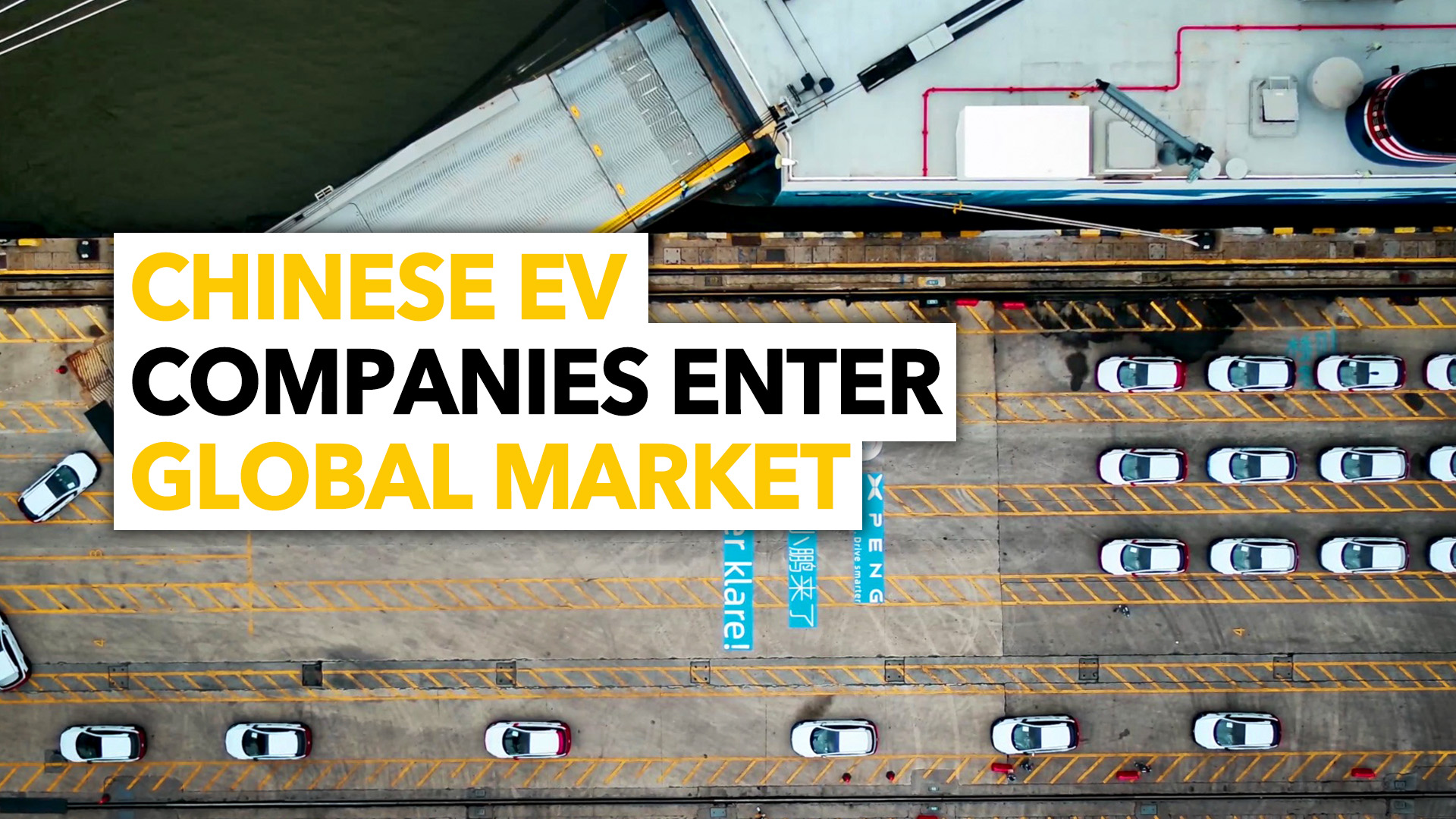 Chinese new energy vehicle (NEV) makers are marching into the global market, unanimously choosing Norway as their first stop even though it is a limited market of just over 5 million people.

Dubbed as one of Tesla's Chinese challengers, NIO opened its first brick-and-motor store outside of China, in Oslo center at the end of September. The Warren Buffett-backed Chinese car company BYD delivered its first batch of 100 all-electric Tang SUVs to customers in the Scandinavian nation in August, with plans to deliver another 1,400 units by the end of the year. NIO's peer company XPeng delivered 100 electric vehicles (EV) to Norwegian customers last December, and plan to sell another 200 this year.

But why did all those Chinese brands choose Norway, where the market size is small and its cold weather is not the most ideal for electric car performance.

Well, Norway, even though it relies heavily on oil and gas revenues, aims to become the world's first country to end the sale of fossil fuel-powered cars, setting a 2025 target of zero emissions for all new passenger cars and light goods vehicles. The policy has turned the country's car market into a laboratory for automakers seeking a path to a future without internal combustion engines. China is the biggest electric car producing nation in the world, so it's natural for Chinese brands to venture in to Norway, and try to figure out a development path that can be used as a template for other markets.

"Norway is an amazing market, over 50 percent of newly sold cars in Norway are electric now," said He Xiaopeng, chairman and CEO of XPeng Motors. 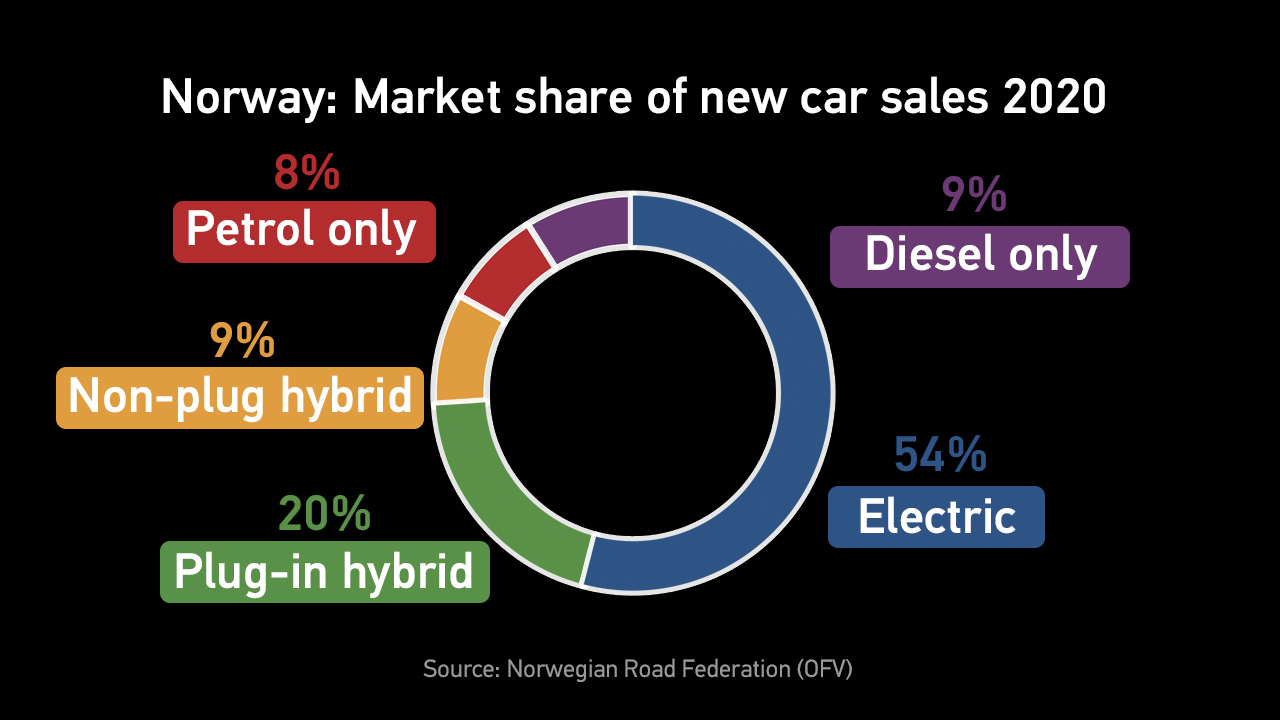 To achieve the 2025 goal, the Norwegian government has issued a slew of incentives for electric car buyers. There is no purchase tax, no import tax and no value-added tax imposed on EVs. Users can save on tolls on roads and ferries, enjoy parking at half price or even free, and also use bus and taxi lanes when driving.

Inadequate charging facilities have been a concern for potential buyers elsewhere, but it's not a problem in Norway, since the Norwegian government has already built fast-charging stations at every 50km on all main roads. By August last year, there are already 16,000 charging points in the country.

The counselor predicted that the incentive policies won't be ending any time soon. "The ambition of the Norwegian government is very high," he said. "It's zero emissions.

"So even though the current share of newly sold electrical costs is more than 50 percent, 75 percent of the total car portfolio is by old-fashioned cars. So there's a long way to go."

The efforts have been paid off. The electric cars' uptake rate has been climbing over the past decade. Last year, electric vehicles made up 54.3 percent of all new cars sold in Norway, a global record. In 2011, that rate was a mere one percent. Currently, there are far more NEVs on Norwegian roads as a proportion of total vehicles than anywhere else. 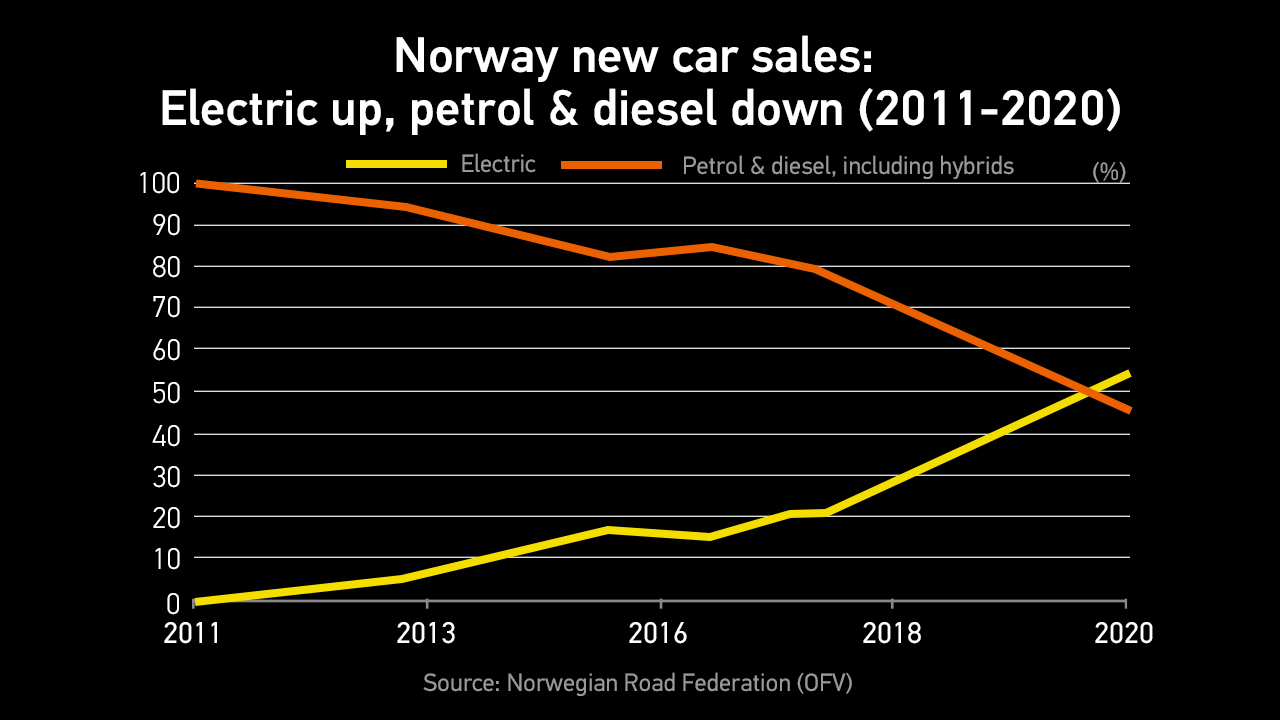 Many local sellers predicted the NEV uptake rate would be even higher in 2021. The seller of Daimler's Mercedes-Benz as well as the Kia, Peugeot, Opel, Citroen, DS and Smart brands, predicted around 70% of its sales in Norway would be of fully electric models this year.

What's worth noticing is that the more expensive EV models – exceeding 600,000 Norwegian crowns ($69,300) – could be subject to a 25-percent value added tax (VAT) under the next Norwegian government.

Chinese electric carmakers are latecomers to the market and are in for a tough battle as the country has attracted almost every renowned brand to test the waters.

How do Chinese brands plan to compete with brands with a longer history and track record? Xpeng's CEO seems quite confident.

"I want to mention something interesting. Except for Tesla, which is doing well in both China and Europe, most electric cars that sell well in Europe usually don't do well in China," said He.

"Why? I think the competition in the smart electric car market in China is fiercer than in Europe on some levels. As a new brand, I think Xpeng has been quite well accepted in Norway. Our two planned stores in Norway are not open yet. The orders we got were all from online channels, I think the sales data is quite good."

Xpeng recently started to ship its P7 model to Norway, and next year will add the P5 model.

"After we adjust our products to the European market, like localization and launch our autopilot function, I am confident that Xpeng will perform better in Norway in the future," said the CEO.

The Norwegian official also expressed confidence in Chinese EV brands' future in Norway, saying although Chinese brands are latecomers compared to Western brands, there has been great interest from local customers, especially from corporate users.

"The Chinese carmakers already have a long history of making cars and are in a good position of competing with foreign brands," said Almklov.

He suggested the Chinese brands should focus on three areas to win a competitive edge – design that accommodates the Nordic lifestyle, a good traveling range and a competitive price. "There are no domestic carmakers in Norway, so all brands are equal in here, and all are important," he said.

The Chinese brands also hope to expand to the broader European market through building up global experience and brand recognition in Norway.

"Through research and adaptation into the Norwegian market, we can lay a foundation for our expansion into the broader European market in the future," said Xpeng's CEO.

He said that many Norwegian customers have accepted completely new brands like Xpeng who are very interested to find out the reason behind the phenomenon and see if the experience could be used in other European markets.

Many overseas customers are still under the impression that Chinese manufactured products are cheaper and of lower quality than Western brands. That is an old stereotype both the Chinese government and the new generation of Chinese brands like XPeng want to shatter.

"We want to sell mid-to-high-end cars in Europe, not mid-to-low-end cars. So XPeng is putting a lot of energy into improving our multilingual function, pushing for the globalization of our voice service and autopilot functions," He said.

"It needs some time, but I believe our sales numbers in Europe will be better next year or the year after that," the leader from China's EV industry said.

China is already the largest NEV manufacturing base in the world, but its carmakers are not satisfied with just that. Entrepreneurs like He's next goal is Chinese brand globalization. 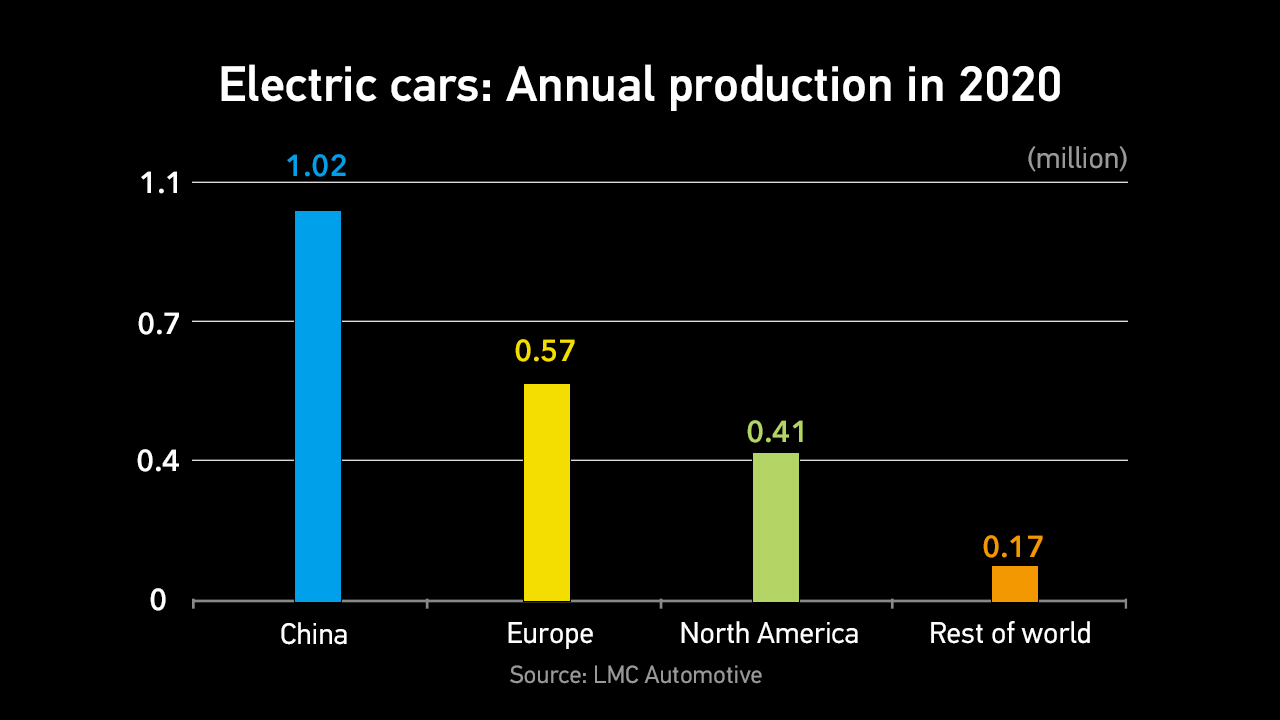 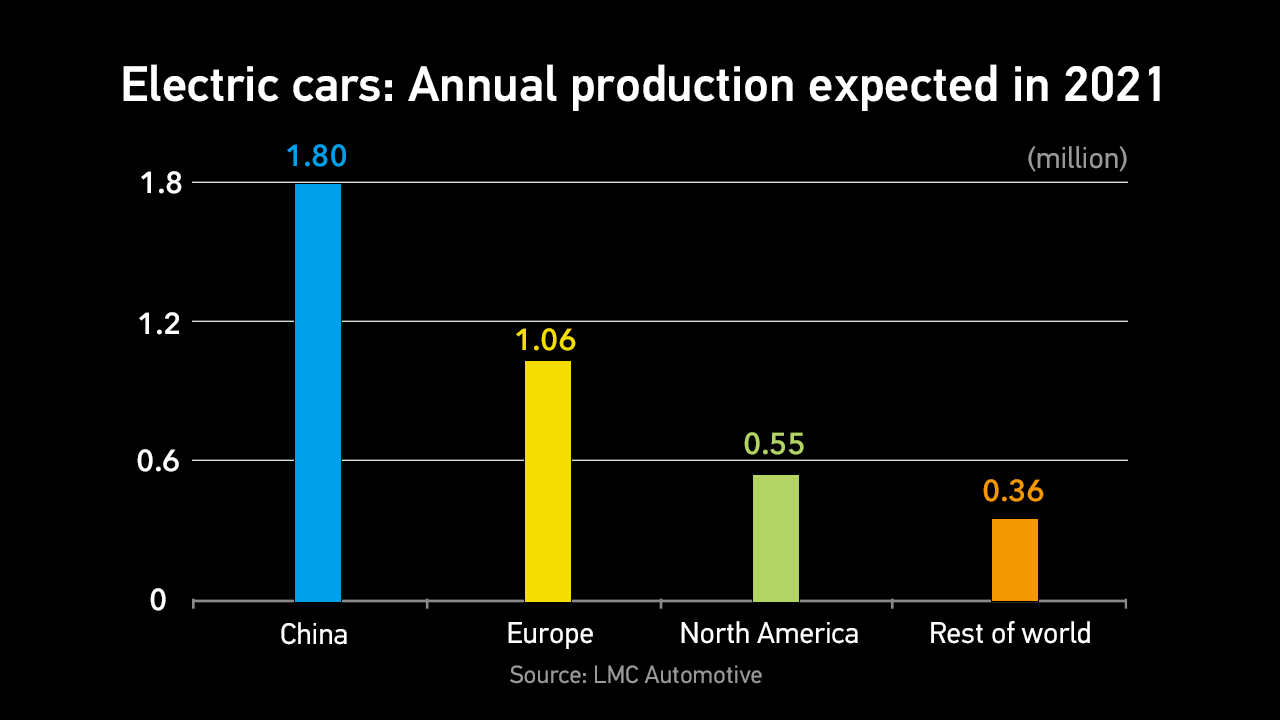 "In the past, many household electrical appliances went global through being original equipment manufacturer (OEMs) for some brands, but I feel we need to put our brand into the global market, only that can count as successful globalization," said He.