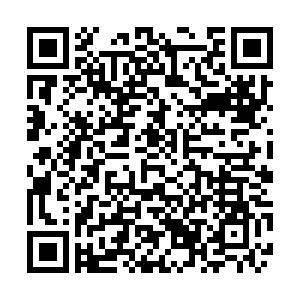 On a wet Sunday evening in the famous water town of Wuzhen in east China, Fan Haoru and his assistant can be seen dragging two huge suitcases along the stone pavement in a rush. A brown fluffy monkey head sticks out of one of the cases, bouncing up and down as Fan strides forward in gigantic yellow shoes. It's not hard to guess from their outfits that they are not tourists but performers of the eighth Wuzhen Theatre Festival, which is taking place now in town dubbed the "Venice of the East." 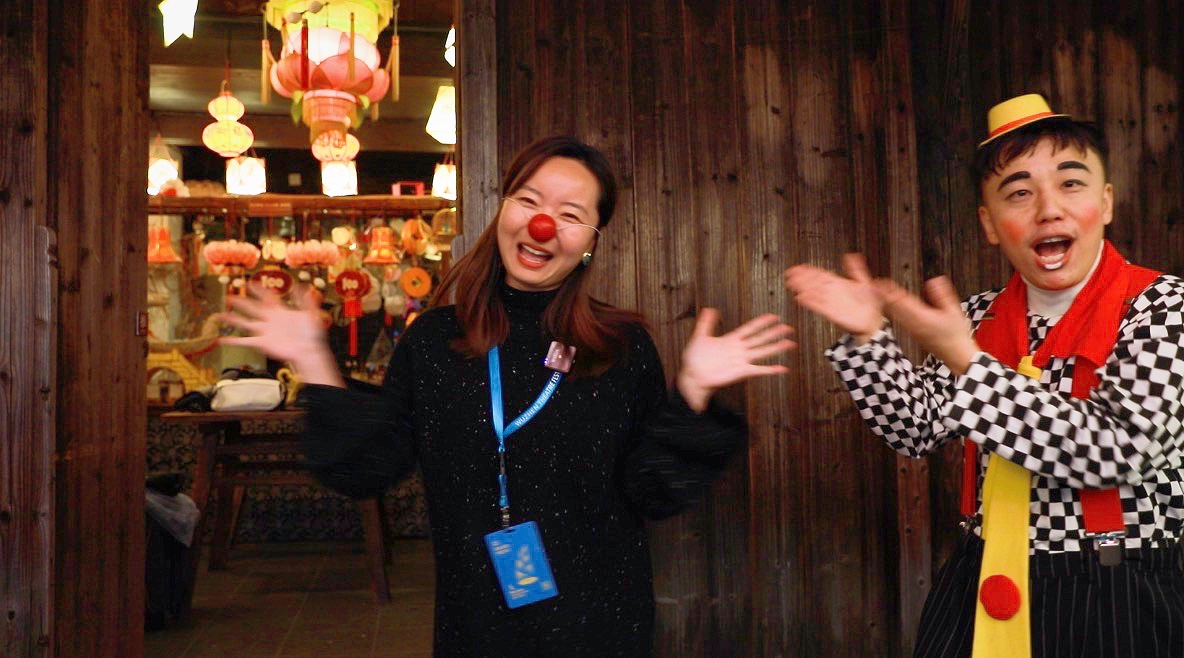 Fan and his auxiliary stop outside a lantern workshop and begin setting up in silence. Without exchanging any words, they act in perfect symphony in terms of what goes where. They were invited to join the festival's outdoor carnival, joining hundreds of other performers taking this 1,300-year-old water town as their stage. As Fan pulls out his magic hat, toys and monkey suit, families with young children start to gather, knowing they are in for a treat.

Without any introduction, Fan puts on his red nose, takes a deep breath, and emerges on stage. First, he warms up the crowd with a ball game with Monkey Popo, played by his assistant Zhou Wangjun. Then he makes a "bird" disappear like a true magician – before ruining his own trick by "accidentally" showing the audience where he put it. As the crowd gasps, guffaws and grimaces, he appears like a puppet-master expertly manipulating their emotions, while at the same time thrilling in the experience of making them happy. And sure enough, he has the crowd hanging on the edge of their seats for the rest of the show. 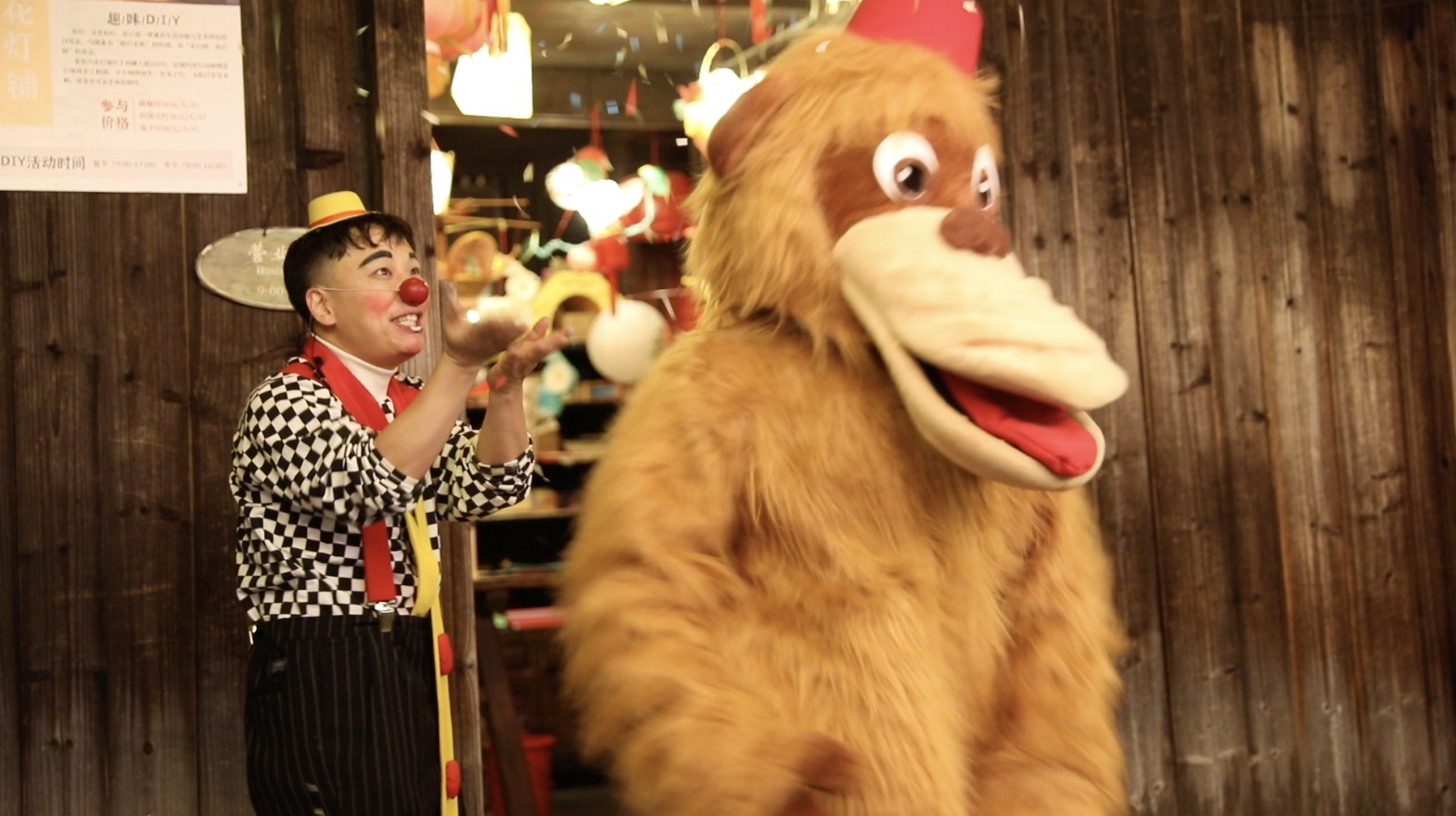 This is not Fan's first appearance at China's prestigious Wuzhen Theatre Festival, and he hasn't always performed as a clown. He started performing at the carnival here back in 2013, the festival's inaugural year, as a mime artist. He also has a regular day job, serving as a college lecturer in graphic design.

"I've experimented with a lot of different performing art genres, but I finally settled on clown shows. These take me back to how I saw the world as a young boy, and I enjoy rediscovering life with the audience through my shows," he said.

Although he describes himself as an "amateur" at this 600-year-old art, Fan takes his side job seriously. He said he has dedicated much time to learning from teachers of the methods espoused by French stage actor and movement coach Jacques Lecoq.

"During the pandemic, I've been using my time to take online classes with students from across the world," he said. Due to his limited English skill, he said he relies on a translation app to get the gist. However, he said there were no real cultural barriers as "our love for the art transcended race, gender and age." 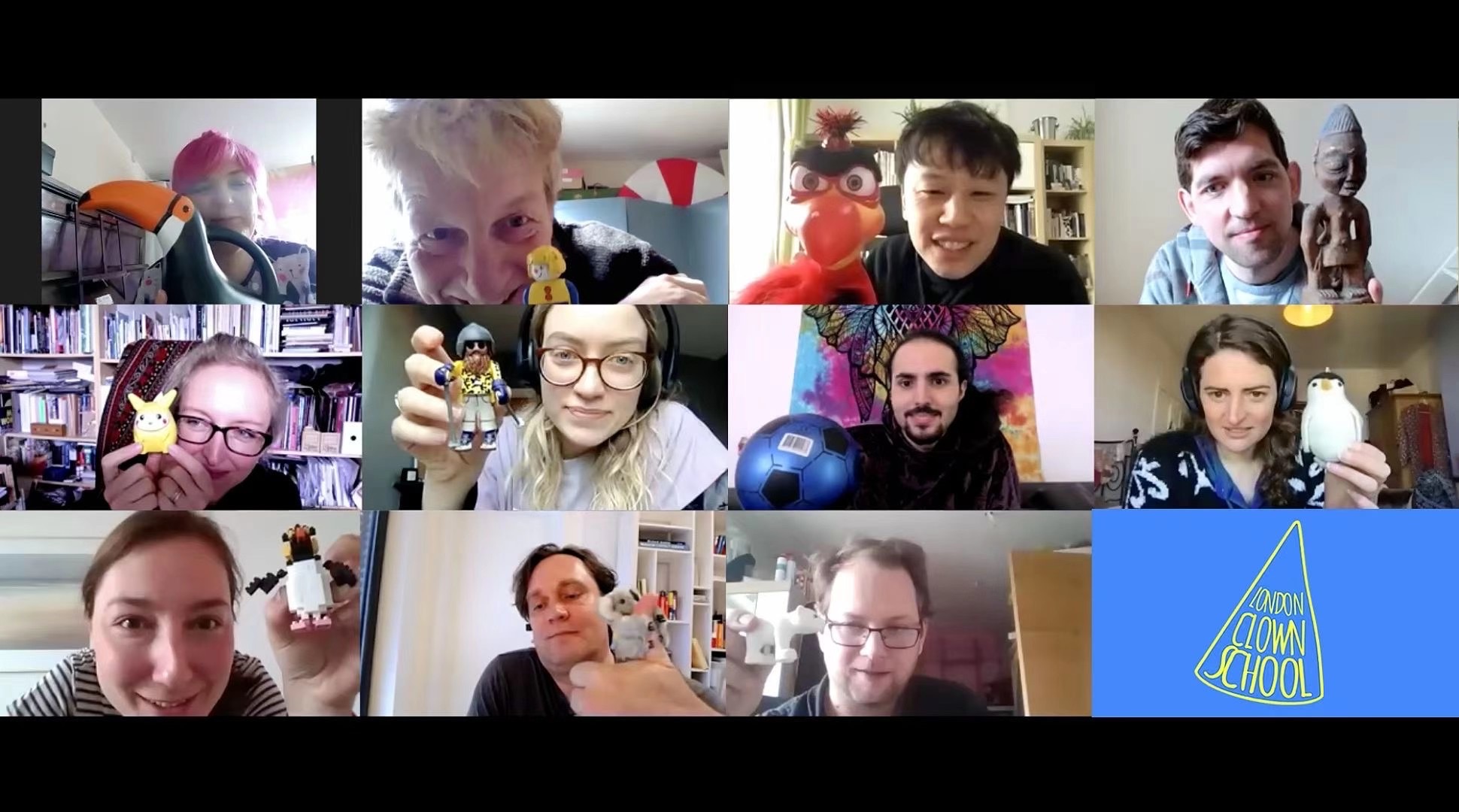 Fan Haoru attends an online class from the London Clown School with performers across the world during the pandemic. /Fan Haoru

Fan Haoru attends an online class from the London Clown School with performers across the world during the pandemic. /Fan Haoru

The Wuzhen Theatre Festival has played an important role in Fan's artistic development.

"I have seen myself grow with the festival. Having taken part in it every year, I've watched many great international performances and created solid bonds with dramatists both from China and overseas," he said. "In a way, you could say I've opened myself up."

The festival gained a reputation over the years for bringing international troupes and plays to this ancient town. However, the pandemic has brought that to a temporary halt, with all of the performers this year being based in China. Nonetheless, a special viewing session has been included so that visitors can still watch foreign plays on screen.

"Taking the idea of a clown show to the next level and one day representing China abroad is my highest goal," said Fan, who has already successfully created three of his own shows.

In the future, he plans to come up with a new one in which he dresses completely in Chinese costume and merges Eastern humor with Western improvisation.

When asked why he works so hard on his "side-hustle" despite having a respectable job, he described it as a labor of love.

"I do the clown shows because I love it. And because I love it, I never grow tired of it," he said. His family was not convinced it was such a smart idea until they saw his shows and changed their tune, he added. 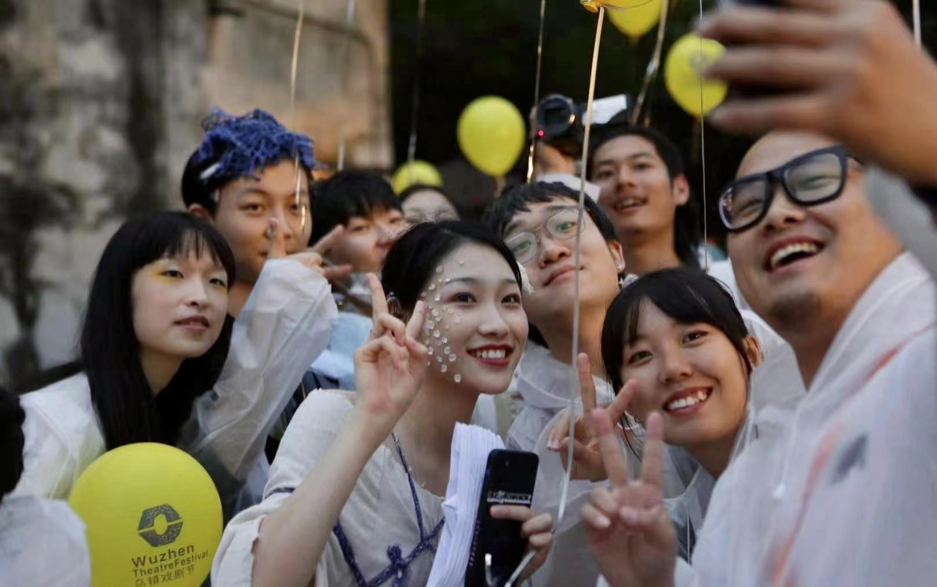 Fan is not the only amateur drawn to this festival. Many more come here driven by their love of the performing arts, even if they lack the experience of the professional performers.

This reflects the changing standard of living in China, where more people now have the luxury to pursue hobbies for fun, rather than obsessing over work just to make ends meet.

This year, the Wuzhen Theatre Festival has taken the concept of "burgeoning" as its theme. The 10-day festival runs from October 14 to 24 and features 66 performances of 24 plays staged at 12 venues.

Wuzhen: A dramatist's dream as it transforms into surreal stage