Download
Decoding America's Korean War: Why did the U.S. opt for armistice?
By Shi Yu 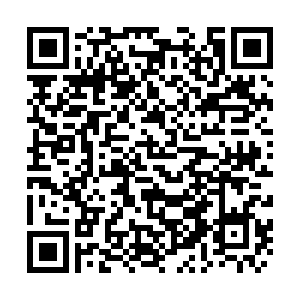 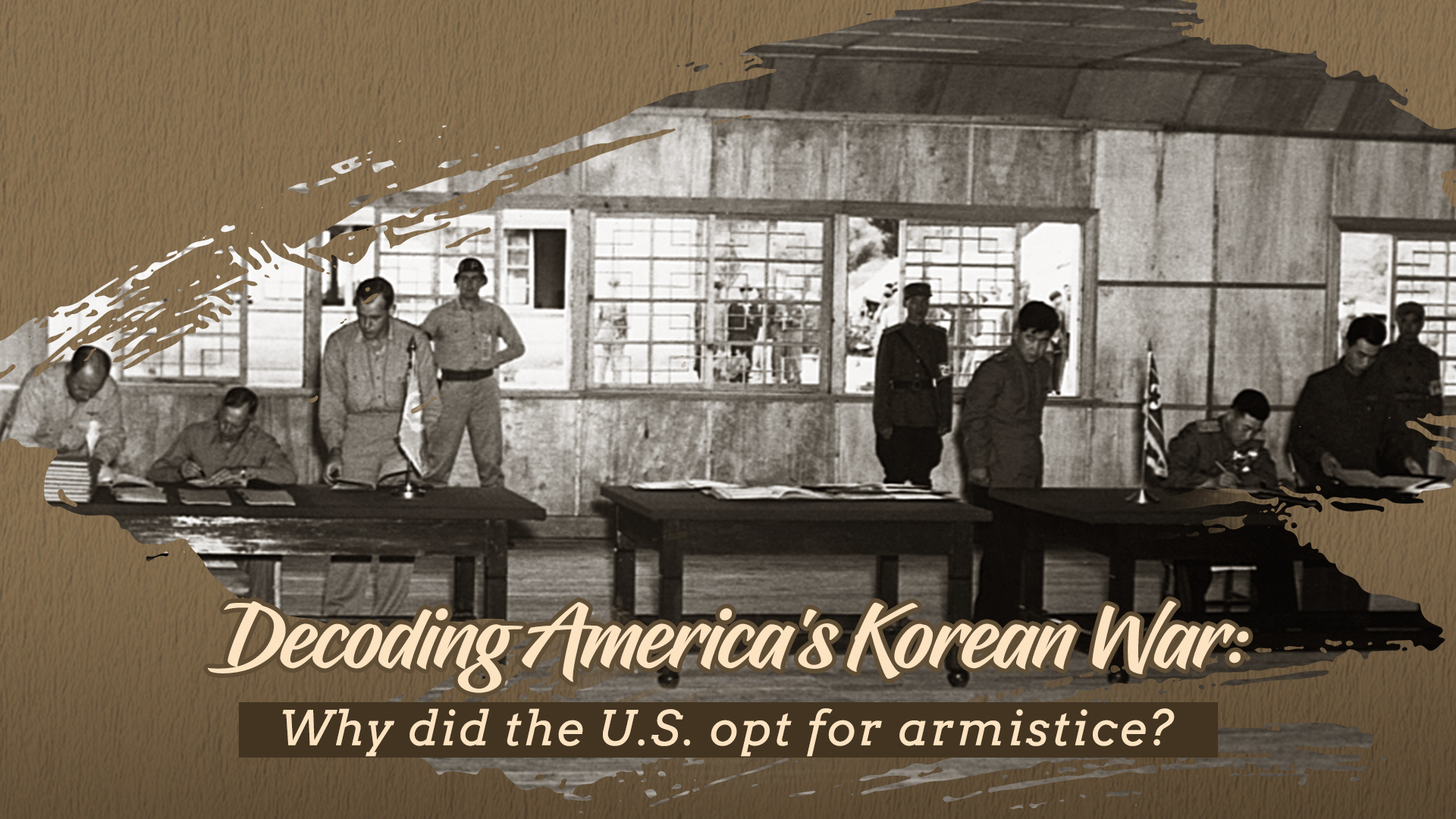 Among numerous wars the U.S. has fought in its less than 250-year history, the Korean War (1950-1953) has rarely been mentioned. Many say it is the heavy losses and the humiliating result – the first war that the U.S. did not win – that turned it into a "forgotten war."

An armistice was signed in July 1953 to stop the armed conflict. To the U.S., one of the world's two superpowers at that time, it was not a satisfactory result, especially when it enjoyed superiority in terms of armament and firepower, along with the support of 15 other countries' forces.

From bragging about pushing back the Chinese People's Volunteers (CPV) and the People's Army of the Democratic People's Republic of Korea (DPRK) to the Yalu River by Thanksgiving of 1950 to adjusting its strategic goal of fighting a "limited war" in the Korean Peninsula, what made the U.S. change its attitude and sit down at the negotiation table?

The Korean War broke out all of the sudden, but the war didn't end before Christmas as Commander-in-Chief of the United Nations Command General Douglas MacArthur boasted, instead it fell into stalemate along the 38th parallel. Among all the reasons for armistice, heavy losses seem the most intuitive one.

According to data from the U.S. Department of Defense, the U.S. spent $30 billion in total on the war. Some 1,789,000 American soldiers were sent to the Korean War, accounting for 31 percent of the total Americans deployed worldwide from June 1950 to July 1953. As many as 33,686 of them died on the battlefield, along with 20,560 who died of other reasons.

The ROK reported some 137,899 military deaths and 24,495 missing while deaths from U.S. allies totaled 3,730, with another 379 missing, according to the ROK Defense Ministry. 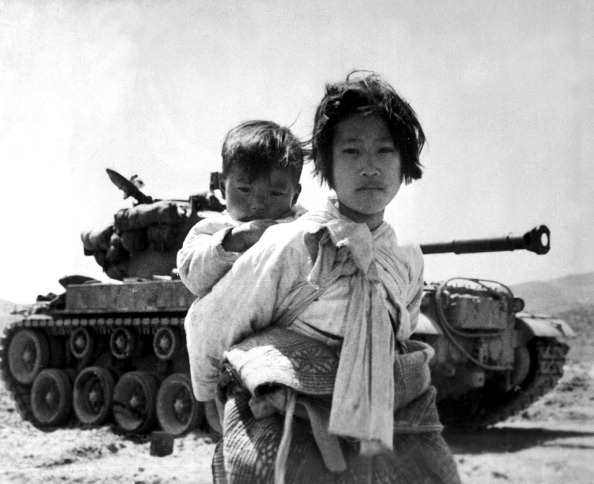 A war-weary Korean girl walks by a stalled M-26 tank with her baby brother on her back, Korean Peninsula, June 1951. /Getty

A war-weary Korean girl walks by a stalled M-26 tank with her baby brother on her back, Korean Peninsula, June 1951. /Getty

Experts have estimated that there might be a total of almost 1 million military deaths and a possible 2.5 million civilian deaths during the Korean War, making the war the most destructive one of the modern era.

Huge losses led to a plummeting public opinion towards the war. Gallup Poll showed that when then U.S. President Harry S. Truman ordered the U.S. ground troops to help the ROK on June 27, 1950, 78 percent of Americans said they approved the decision. But the support rate dropped dramatically to 38 percent after the U.S. suffered major defeats and heavy losses due to tense resistance from the CPV and the DPRK army.

The public opinion also affected the U.S. presidential election of 1952 with the anti-war Republican Dwight D. Eisenhower defeated pro-war Democrat Adlai E. Stevenson in a landslide of 442 to 89 electoral votes. To meet his promise, the newly elected U.S. president quickly moved to end the war through concrete efforts. 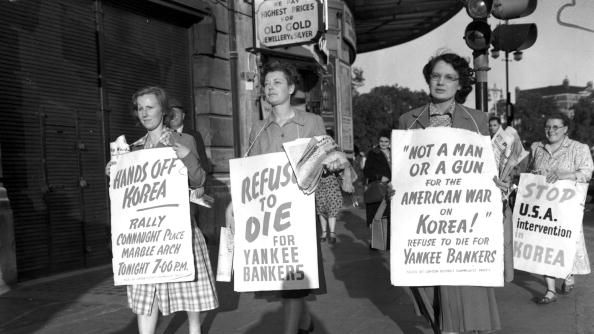 Women with placards demonstrating against the Korean War, in London, the UK. /Getty

Women with placards demonstrating against the Korean War, in London, the UK. /Getty

From a strategic point of view, the Korean Peninsula is also not the top priority in the grand strategy of the U.S. As scholars pointed out, the focus of the U.S. at that time was in Europe.

At that time, power games between the U.S. and the Soviet Union were spreading worldwide after the global reshuffle of power brought by World War II. Among all places, Europe was regarded as a major area of interest by the Truman administration and the main battlefield against Soviet Union.

Explaining the U.S. decision of seeking for an armistice, Richard D. Hooker, Jr., director of Institute of National Strategic Studies at U.S. National Defense University, said that Washington was in fear of "a Soviet lunge into central Europe," which, in his opinion, was a "more critical strategic priority."

Decoding America's Korean War: In the shadow of Truman Doctrine 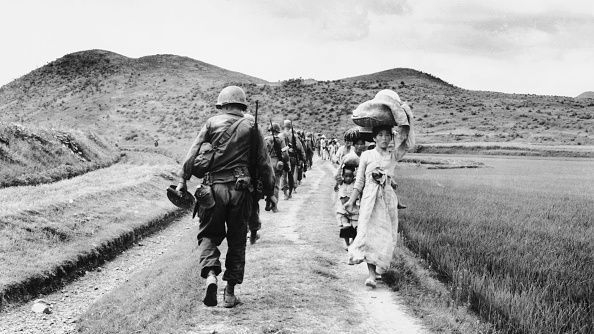 U.S. infantrymen go northward against a line of fleeing refugees as they march into the Naktong River region in South Korea during the Korean War. /Getty

U.S. infantrymen go northward against a line of fleeing refugees as they march into the Naktong River region in South Korea during the Korean War. /Getty

The U.S. was worried that if situation in the Korean Peninsula developed without control, the Soviet Union may intervene and it would turn into an all-out war with the Soviet Union, said Du Yongxin, a scholar at Xi'an Foreign Language University.

The dismissal of General MacArthur as supreme commander in Korea, who called for the use of nuclear weapons and enlarging the war all the way to China, was a reflection of Washington's concern over the direct Soviet intervention.

"The strategy would involve us in the wrong war, at the wrong place, at the wrong time, and with the wrong enemy," Chairman of the Joint Chiefs of Staff General Omar Bradley said, rebuking MacArthur's proposal of expanding the war to China.

He signaled that the U.S., with containment of communism as its core strategy, believed its main task should be containing the Soviet expansion in Europe, rather than getting tangled with China and the DPRK in the Korean Peninsula.

Therefore, noticing the stalemate with overstretched resources consumed on the battlefield every day, the U.S. finally decided to end the war and put its attention back to the Europe frontline to get prepared for confrotation with its true rival, the Soviet Union.