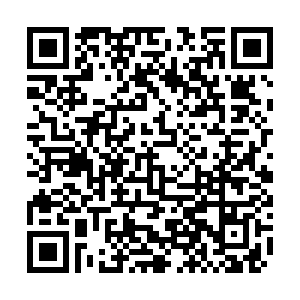 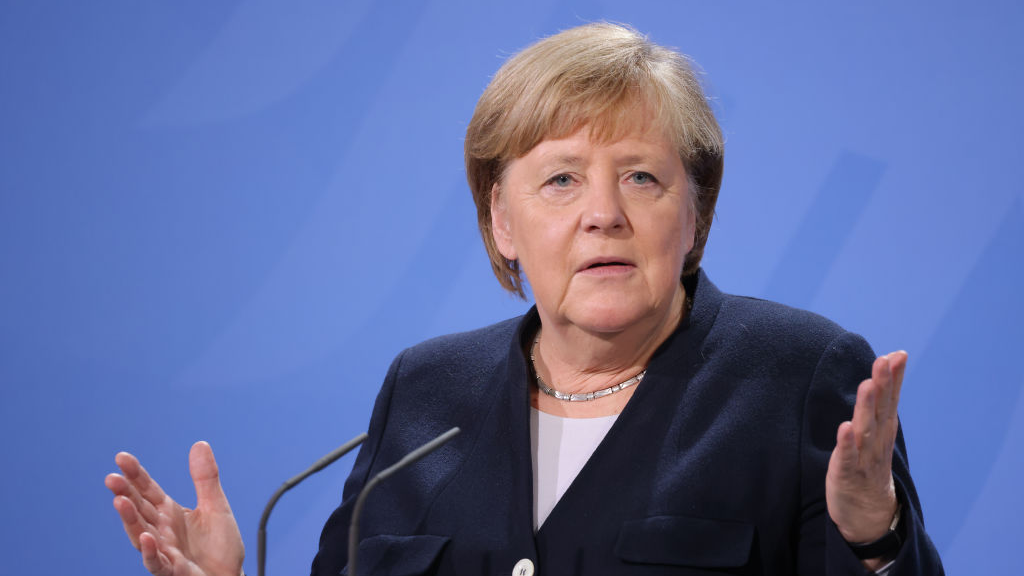 Former German Chancellor Angela Merkel speaks during the official transfer of office at the Chancellery in Berlin, Germany, December 8, 2021. /Getty

Former German Chancellor Angela Merkel speaks during the official transfer of office at the Chancellery in Berlin, Germany, December 8, 2021. /Getty

Editor's note: This is the fourth article of the "2021 Year in Review" series on "New Crises, New Orders and New Paradigms." Zhang Mengyuan is a 2019-2020 German Chancellor fellow at Alexander von Humboldt Foundation. The article reflects the author's opinions and not necessarily the views of CGTN.

Unlike some nations, power transition in Germany has no episodic drama of partisanship. The electing of the Social Democratic Party (SPD) candidate Olaf Scholz as Chancellor was itself a compliment to his predecessor Angela Merkel's 16-year tenure. He made "inheritance" his political campaign's core strategy rather than "change," which made the message clear for Germans and the nation's neighbors that he would stick to the old order.

Not only had Merkel enabled the German economy to ride the wave of globalization, but she also steered the liberal ship against the anti-globalization shockwave. She is a unique liberalist in the Western political spectrum, pursuing liberal ideas in both economic development and social security, differentiating her from both traditional left- and right-wing politicians.

Merkel's passivity was her prescription for solving crises; she either waited for problems to solve themselves, or made gestures at the last minute towards public opinions. She seldom reformed, but this was also designed to secure her power pillars. Changes to the status quo often come with resistance; for example, her predecessor Gerhard Schroder's "Agenda 2010" backfired and shortened his political life.

Scholz will keep these experiences in mind, but he also needs to balance the strong will to change of his coalition partners the Green Party and the Free Democratic Party (FDP), particularly in accelerating low-carbon economic transformation and investment in digital infrastructure. Such changes would require the redistribution of interests and resources as well as a belief in guiding voters to change consumption lifestyles. 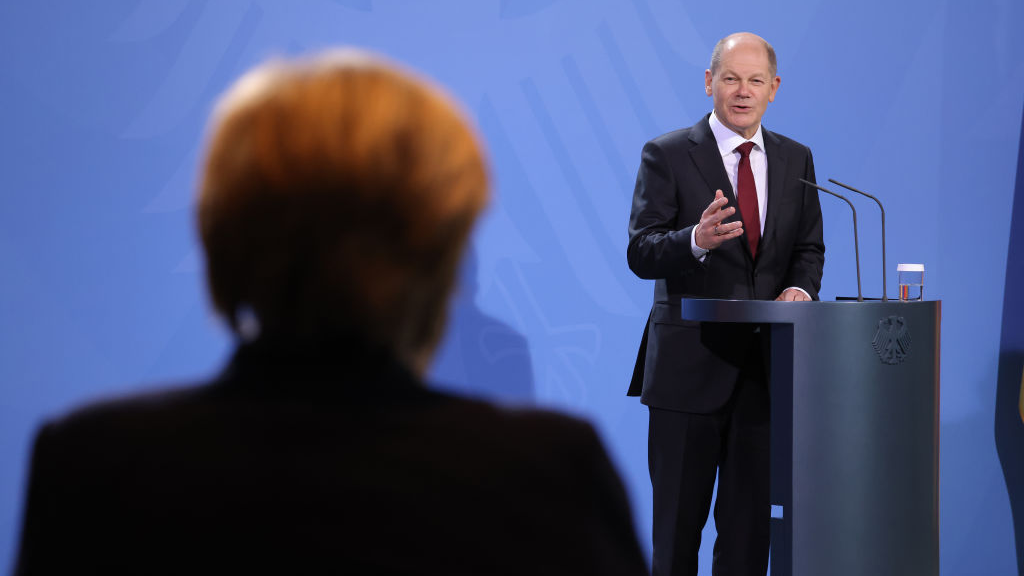 New German Chancellor Olaf Scholz (R) speaks as former Chancellor Angela Merkel (pictured from back) listens during the official transfer of office at the Chancellery in Berlin, Germany, December 8, 2021. /Getty

New German Chancellor Olaf Scholz (R) speaks as former Chancellor Angela Merkel (pictured from back) listens during the official transfer of office at the Chancellery in Berlin, Germany, December 8, 2021. /Getty

Merkel's stepping down implies the European Union has lost its unquestioned powerhouse; the EU won't get back on track before next April's French presidential elections and the two locomotives need to re-adapt to suit the new order. Merkel failed to build a united front in Europe in dealing with asylum and immigration, and the Eurozone countries in the south are still holding the grudge about how she saddled their economies with austerity. The rift is further clouded as a longtime advocate of fiscal prudence, Christian Lindner from the FDP, takes on the key role as finance minister. Europe has lost a politician who can truly speak the language with Russia, with the Sword of Damocles that the Russians have hanging over the European continent in energy security and geopolitics.

Many European politicians underestimate the importance of the communication channels built by Merkel. She had criticized Schroder's China policy as the leader of the opposition party, but during her term of office, she carried forward his strategy of "Wandel durch Handel (change through trade)" to the greatest extent possible. By and large, Scholz's China policy will continue in a pragmatic way, with the traffic light alliance's coalition pact as the main guide. This guiding pact mentions China 12 times, more than the frequency in the grand coalition deal that was formed in 2018 when China was only mentioned five times, which reflects the complicated bilateral relations between China and Germany.

The German new government has stated clearly it would push for a united EU approach towards China and would not make a separate German policy on China. It would also continue the EU's three-pronged strategy, i.e., define China as a competitor for economic and technological leadership, a systemic rivalry in the security and human rights sector and a cooperating partner in climate change. Whether this strategy by itself can be fully self-consistent has always been the focus of external concerns. When the EU dents China in its core political and economic interests, two facets dominate, and it is somewhat unrealistic to expect China to return to the negotiating table as a partner.

After Merkel's farewell to the Chancellery, voices have been raised that Germany should build more Chinakompetenz (China competence), especially in terms of education and diplomacy, to enhance the narrative and the understanding of complicated China. Only on the premise of knowing oneself and his partner better can he have a say in his policy towards his partner.