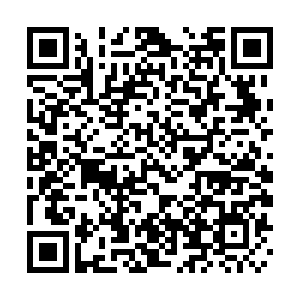 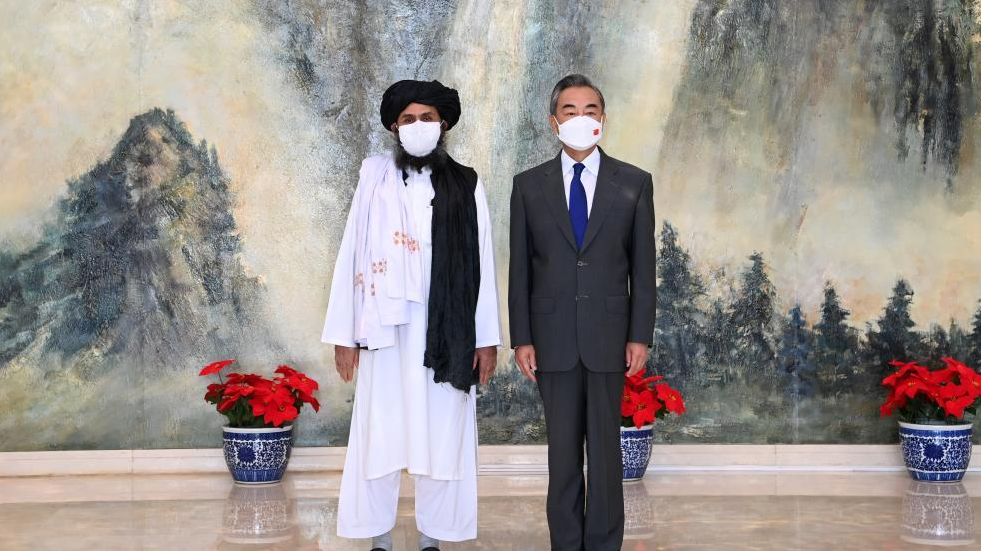 Editor's note: This is the sixth article of the "2021 Year in Review" series on "New Crises, New Orders and New Paradigms." Irene Wang is an international observer at Liaowang Institute. The article reflects the author's opinions and not necessarily the views of CGTN.

In a bid to control the level of U.S. engagement in the Middle East, the Joe Biden administration keeps stressing that it was moving "back to basics." However, the U.S. failed adventure in Afghanistan, featured by its haphazard military withdrawal, caused a crisis of confidence among America's partners in the region.

China is now the region's single largest investor and the largest trading partner to 11 Middle Eastern countries. It has financed the construction of ports and industrial parks in Egypt, Oman, Saudi Arabia, the United Arab Emirates and Djibouti.

With a diminishing U.S. presence and a lack of support from Russia, key actors in the region are taking steps to deescalate tensions and build or rebuild working relationships on their own.

When most aid was frozen from the West after the Taliban took over the country, China pledged $37 million worth of humanitarian assistance, promised to provide emergency aid to fight the COVID-19 pandemic and planned an initial delivery of three million doses of vaccine to Afghanistan.

Chinese Foreign Minister Wang Yi called on the U.S. to meet its responsibilities after its withdrawal from Afghanistan and expressed that Beijing would invite the related nations to attend the third Neighbors of Afghanistan meeting at an appropriate time.

China and the Taliban also agreed to hold joint meetings in the future and create mechanisms to further broaden cooperation.

Expo 2020 Dubai, with a grand theme that embodies the principles of "Connecting Minds and Creating the Future," was the first ever to be hosted in the Middle East and also the first World Expo since the start of the pandemic. Uniquely, this expo, for the first time, gave each country its own pavilion.

As a return of favor to Dubai among a series of favors exchanged between China and the United Arab Emirates (UAE), China made great efforts to build a grand pavilion, named "Light of China." The shape of a traditional Chinese lantern implies the beautiful longing in Chinese culture for brightness, reunion and happiness and symbolizes the friendliness of the Chinese people toward the Emirati people. It also demonstrated China's spiritual pursuit of building a community with a shared future for mankind in the new era. 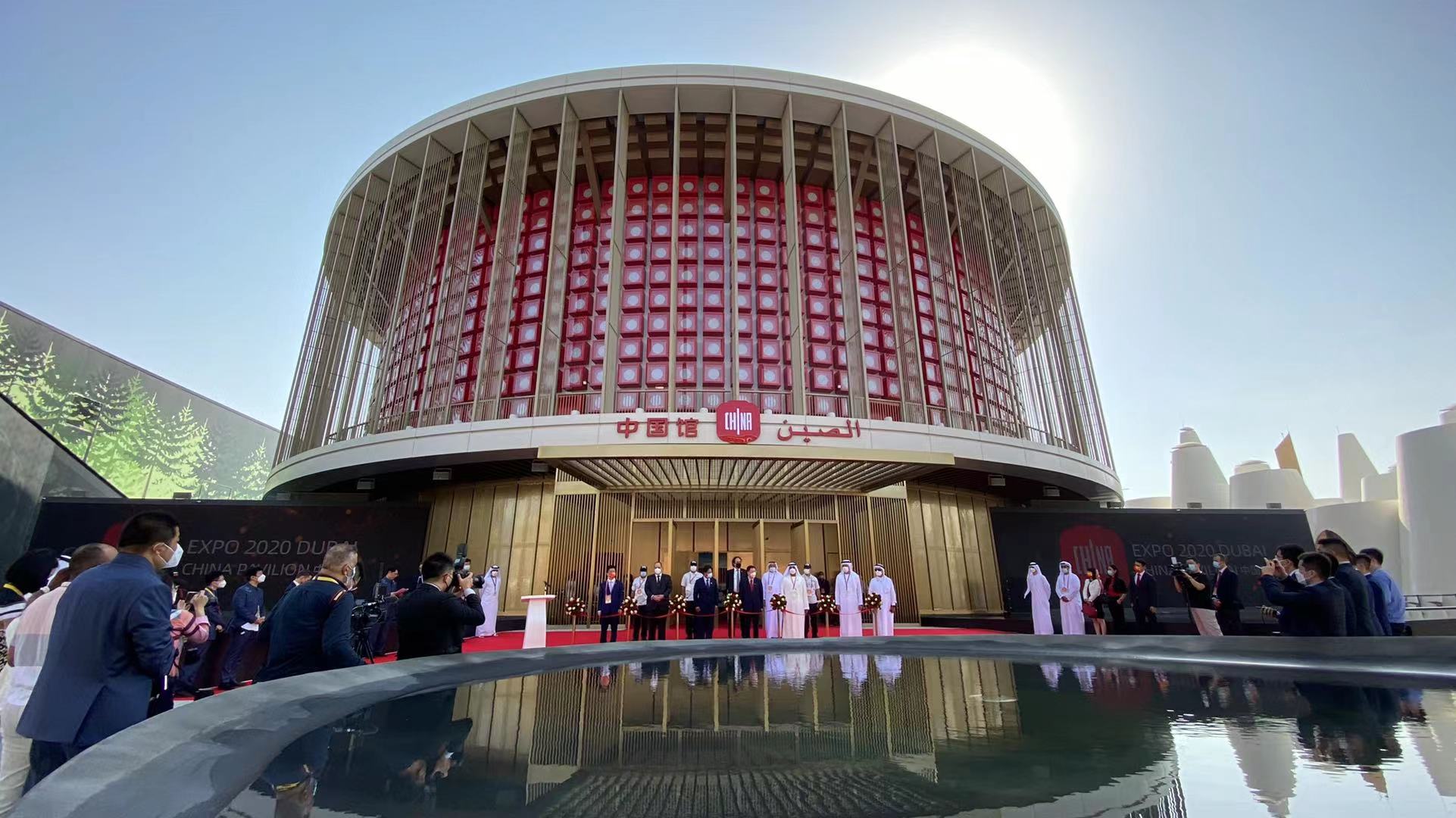 The opening ceremony of the China Pavilion at Expo 2020 in Dubai, the United Arab Emirates, October 1, 2021. /Xinhua

The opening ceremony of the China Pavilion at Expo 2020 in Dubai, the United Arab Emirates, October 1, 2021. /Xinhua

The significance of the expo extends well beyond China-UAE ties. The bilateral relations have been stronger during severe challenges, including not only the most serious global pandemic since the turn of the century, but also the growing threat of climate change. The expo added joy and hope to the world and offered a platform for dialogue and mutual learning between different civilizations and cultures.

The Israeli-Palestinian conflict returned with an 11-day escalating violence in May at a scale not seen in many years, killing over 250 including more than 100 children, the deadlocked territorial issue remained unsolved and even marginalized.

In July, the Chinese foreign minister voiced readiness to propose new ideas for peace talks, invited Israeli and Palestinian officials to negotiate in China, supported greater role of the Geneva Initiative in expanding dialogue and reaffirmed two-state solution as only path.

This year, the COVID-19 pandemic keeps wreaking havoc around the world, plaguing many places, with the Middle East being one of the hardest-hit regions. The epidemic claimed thousands of lives, strained public health resources, constrained economic growth and public finances, and worsened poverty, unemployment and inequality.

Further development of the wider region, either politically or economically, rests on the capabilities of the governments to contain the spread of the coronavirus.

Surprisingly, the broader regional economy bounced back - average GDP growth in 2021 returned to around 4 percent after contracting by 4 percent in 2020.

What's worth pointing out is that the Iranian economy has surprisingly shown signs of improvement. The 25-year strategic partnership agreement with China, including $400 billion of Chinese investments, is sure to further inject impetus to the growth of the Iranian economy.

Following a year of mutual help and cooperation in fighting the COVID-19 in 2020, the vaccine cooperation between China and the region in 2021 further demonstrated that they are true friends in need.

China donated and exported a large quantity of COVID-19 vaccines to Middle East countries and Afghanistan in dire need of them, at a time when Western countries largely stockpiled vaccines for their own good. Egypt, Algeria and UAE created joint ventures with China to produce Chinese vaccines to meet local demand.

On December 24, Afghanistan's caretaker government began to distribute the China-aided humanitarian supplies to the country's 34 provinces. Acting Minister for Refugees and Repatriation Mawlawi Khalil-ur-Rahman Haqqani said at a ceremony held for the distribution, "China is our good neighbor and the assistance for us is very important."

While progress has been seen, the security landscape remains complicated: the Middle East is still a tale of war and peace in 2021. China is ready to work with all countries to promote cooperation mainly in three areas: further synergy of their development strategies, better integration of their resource markets, and exchange of experiences on governance.