Download
Reporter's diary: A look back on China's migrating elephants
By Yang Jinghao 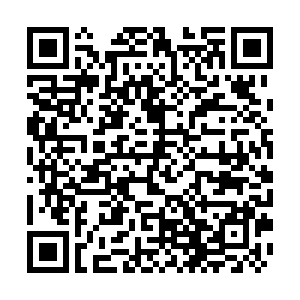 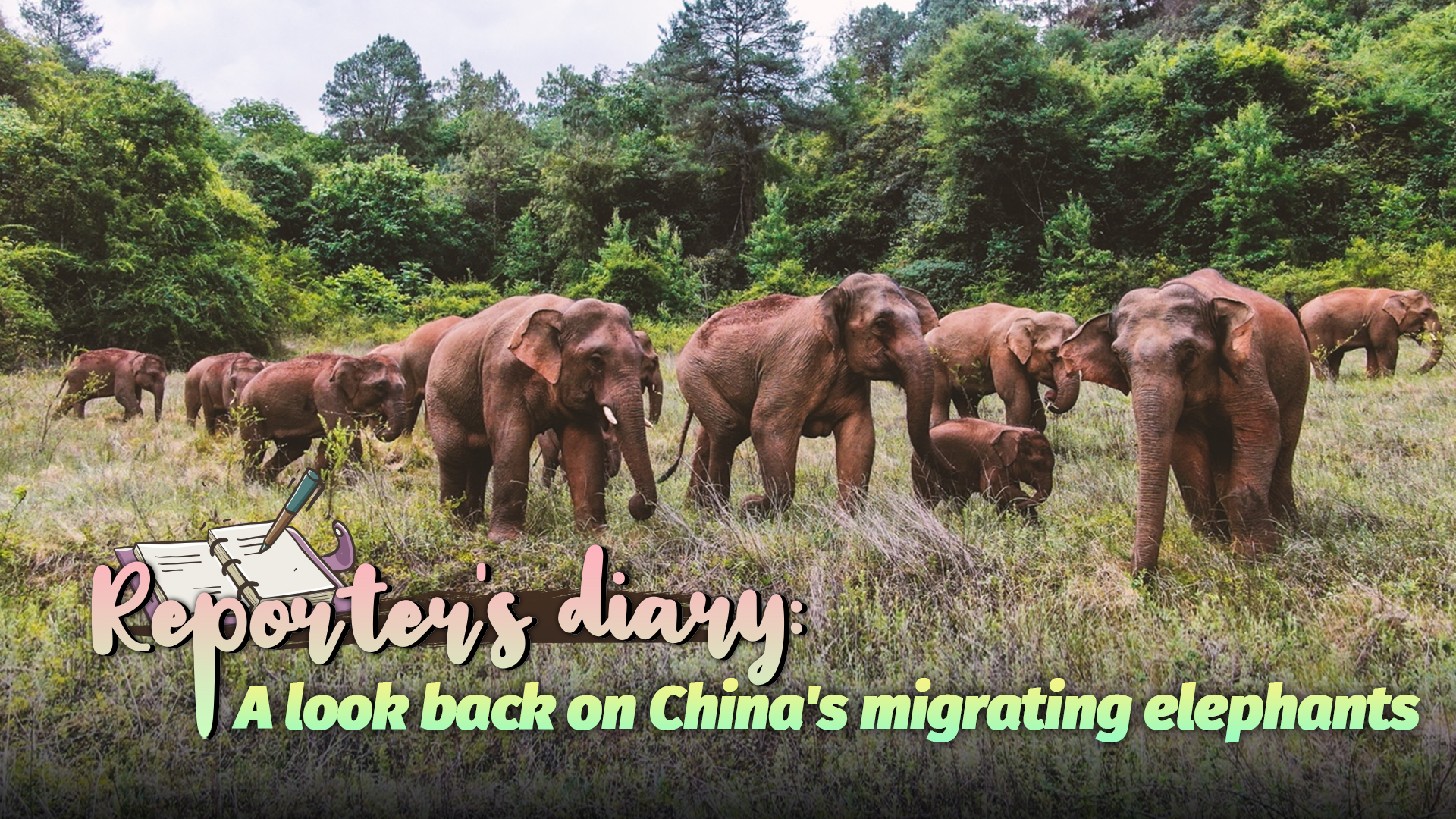 Editor's note: A herd of wild Asian elephants inhabiting southwest China's Yunnan Province amazed the world earlier this year with an unprecedented northbound journey. As they returned to their natural habitat, CGTN reporter Yang Jinghao traveled to where they set out to review this epic trek.

In late December, I traveled to Xishuangbanna in southwest China's Yunnan Province, again. Yes, this was already the sixth time I visited this tropical region bordering Laos and Myanmar within this year, and most of the time with the same goal –learning more about the elephants inhabiting here, especially the herd that have made global headlines with an unprecedented migration.

Like many others, I breathed a sigh of relief when I learned from local authorities that the giant adventurers have finally come back home.

"On December 9, the herd of migrating elephants returned to the Mengyang sub-reserve of the Xishuangbanna National Nature Reserve. They've been staying in the reserve and surrounding areas since then and are all in a good state," read a statement exclusively sent to CGTN by Yunnan Provincial Forestry and Grassland Bureau. 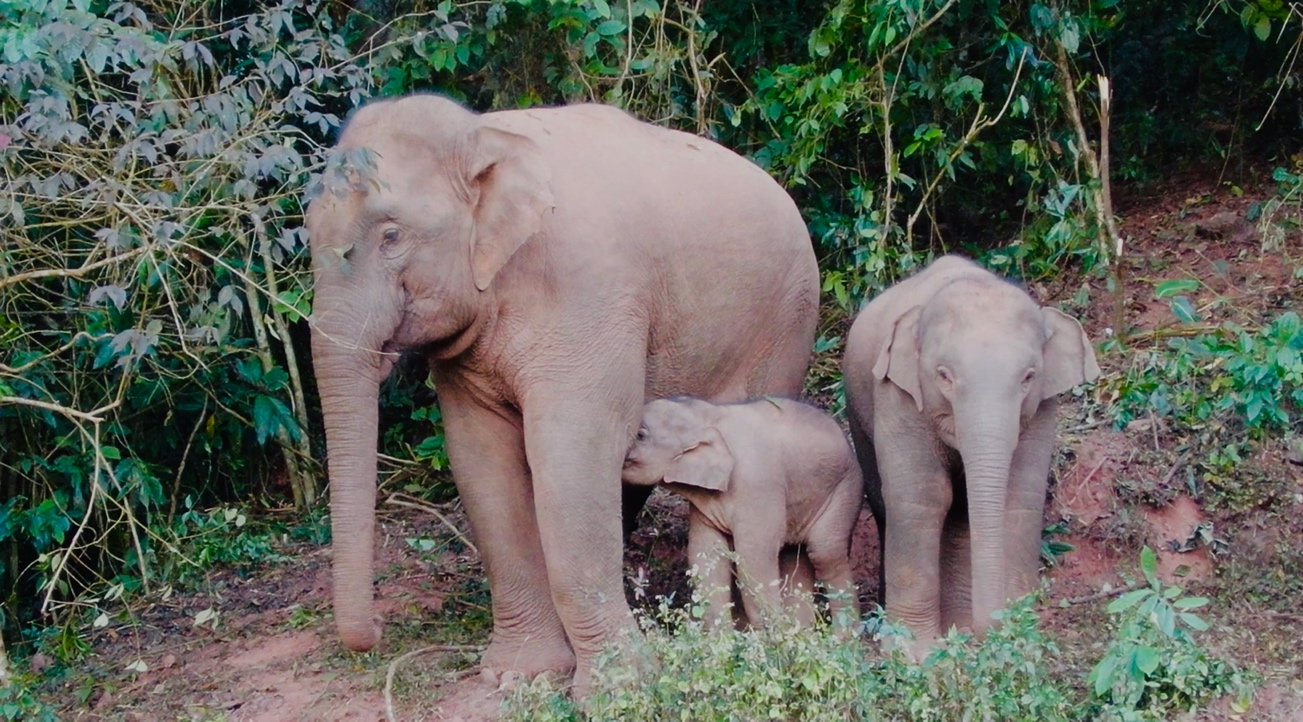 Recent surveillance shows that an elephant of the herd breastfeeds her baby at the Xishuangbanna Nature Reserve. /Courtesy of Yunnan Provincial Forestry and Grassland Bureau

Recent surveillance shows that an elephant of the herd breastfeeds her baby at the Xishuangbanna Nature Reserve. /Courtesy of Yunnan Provincial Forestry and Grassland Bureau

The homecoming signifies a happy ending of this yearlong episode that has captured the attention of tens of millions. Looking back, I believe everyone that has witnessed the breathtaking journey is sure to get a piece of beautiful memory from it.

The herd walked out of the reserve in March 2020. In April this year, they left Pu'er city and moved to Yuxi city, sounding an alarm to the public as it is the first time that elephants in China left their traditional habitat. The government began to act when the tusked neighbors approached the provincial capital of Kunming in May. A special task force was immediately set up to closely follow the giants, in a bid to prevent any conflict with people and at the same time guide them back. 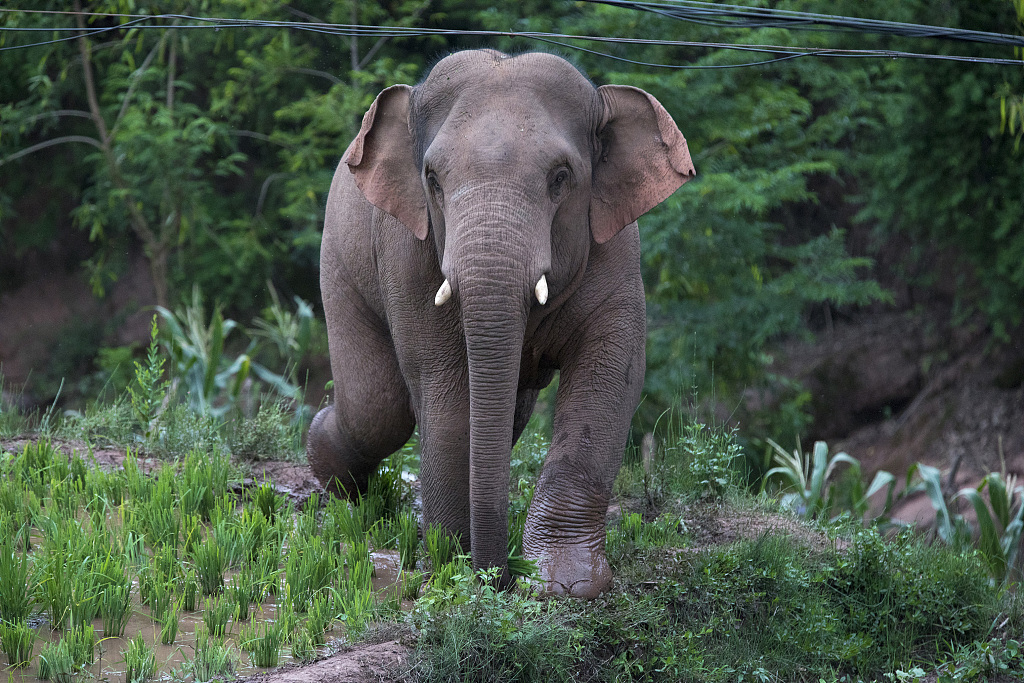 A wild elephant in a local villager's vegetable garden. /CFP

A wild elephant in a local villager's vegetable garden. /CFP

In Xishuangbanna, I visited Shen Qingzhong, a senior engineer with the nature reserve's management bureau. During this government-led mission, he worked out plans for viable actions as an expert.

During the 1,000-plus-kilometer trek, the elephants tramped over mountains, strolled around urban areas, raided farmlands, and snuck into local farmers' homes for more food. Shen said that the migration actually provided a rare opportunity to learn more about the gigantic mammals. He shared with me many behind-the-scenes stories by showing the precious pictures he has taken during that period.

"I was surprised to see how they climbed over a high flood-wall, especially a baby elephant. It was totally beyond my expectations," said Shen, noting that this is one of the moments that have greatly impressed him.

"And we found that the animal has a stronger ability to adjust to new environments than we thought," he added. 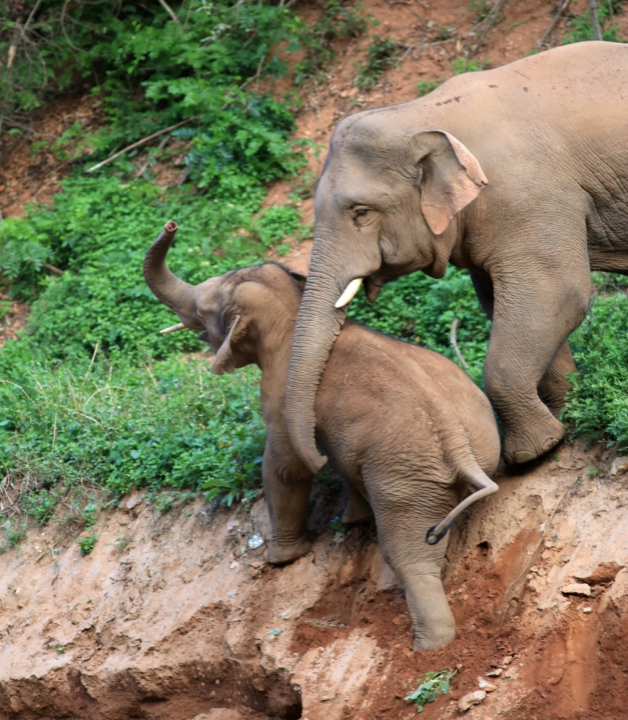 An elephant tries to pull another one back from a slop during their northward journey. /Courtesy of Shen Qingzhong

An elephant tries to pull another one back from a slop during their northward journey. /Courtesy of Shen Qingzhong

Conducting round-the-clock monitoring, building temporary roadblocks, and preparing various food for the elephants… the task force took every possible means to protect the animals from harm and from disrupting human communities.

Professor Chen Mingyong from Yunnan University, is another member of the expert panel. He said guiding the jumbo animals back home is an experience full of both excitement and exhaustion.

"We were up until three or four in the morning, sometimes even 6 or 7 when the elephants fell sleep, as we worried they would break into villagers’ homes or suddenly disappear from our sight, causing an emergency," Chen said.

Despite this, the whole team, made up of officers of governments at different levels, experts like Shen and Chen, firemen who conducted 24/7 surveillance with drones, and even local farmers, have treated the tusked friends as if they were their own family members.

On August 8, the herd of 14 crossed a bridge and returned to Pu'er, which was considered a decisive step on their homecoming journey.

"During their last 10 kilometers before they set foot on the bridge, the road surface was burning hot. So we used fire trucks to spray water on the road ahead of them so it wouldn't hurt the soles of their feet," Chen recalled.

"Things like this seem easy, but we had to think about their needs all the time," he added. 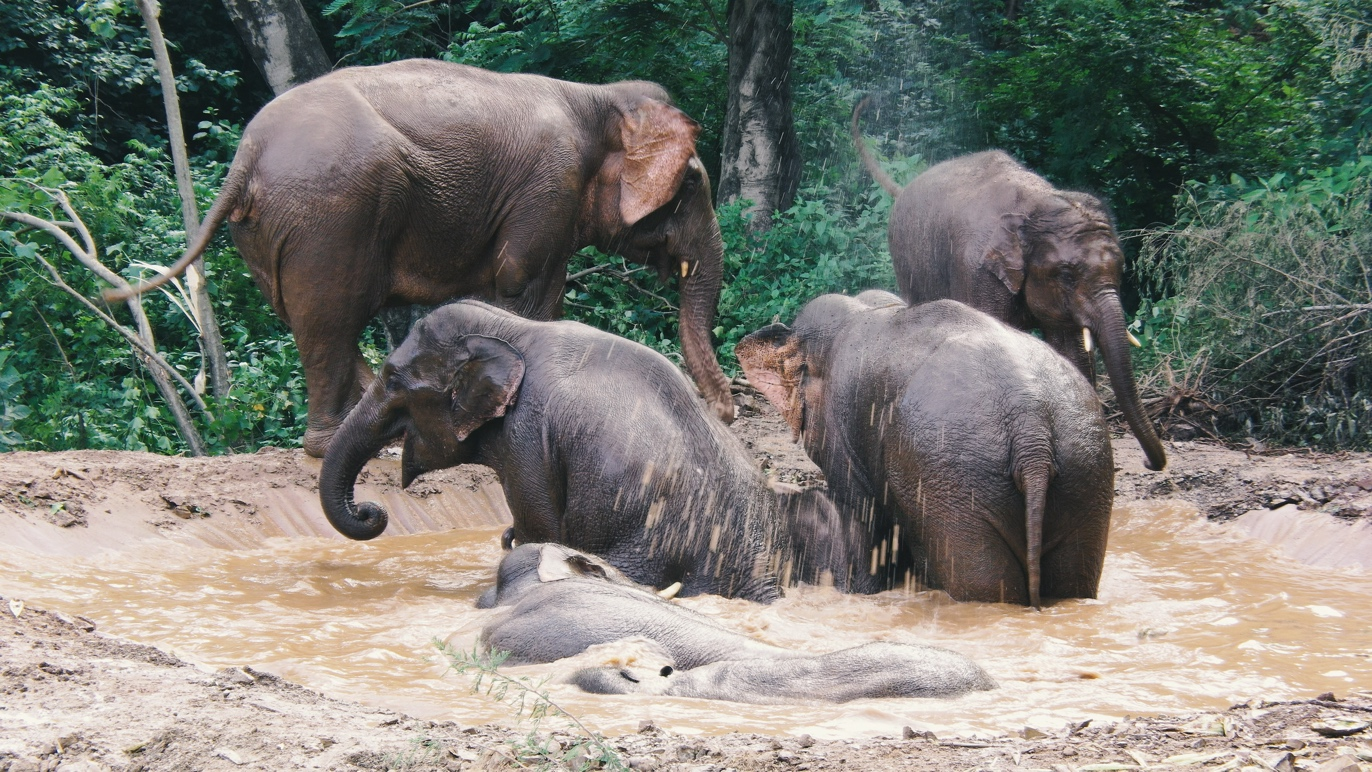 Some of the elephants play in the pond the task force built for them. /Courtesy of Shen Qingzhong

Some of the elephants play in the pond the task force built for them. /Courtesy of Shen Qingzhong

As Shen recalled, the staff made all efforts to lure the elephants to cross the bridge, as it's the safest way for the animals to reach where suits them.They even built a "swimming pool" near the bridge overnight.

"They would be exhausted after such a long trek. The pond provided them a place to drink and have fun. This not only helped them cool down, but they could also get some nutrients their bodies needed," said Shen, noting that the creatures relaxed in the pond for quite a while as they expected.

Their safe return, undoubtedly, is great news. But it also heralds the start of another pressing mission – protecting the endangered species in a more scientific and pragmatic way.

Ahimsa Campos-Arceiz is a researcher at the Xishuangbanna Tropical Botanical Garden, a research institute of the Chinese Academy of Sciences. With expertise on the study of large animals, he has stayed in several southeast Asian countries during the past years. He said the gentle approach taken by Chinese authorities towards the migrating elephants are applaudable and can be learnt by other countries where elephants inhabit.

"I think it was very expensive, but there was no major loss in terms of any human life or any other kind of casualty. So I think it's really commendable to be able to bring back the elephants. And probably we learn a lot, probably local authorities learn a lot about how to handle this situation in the future," he said. 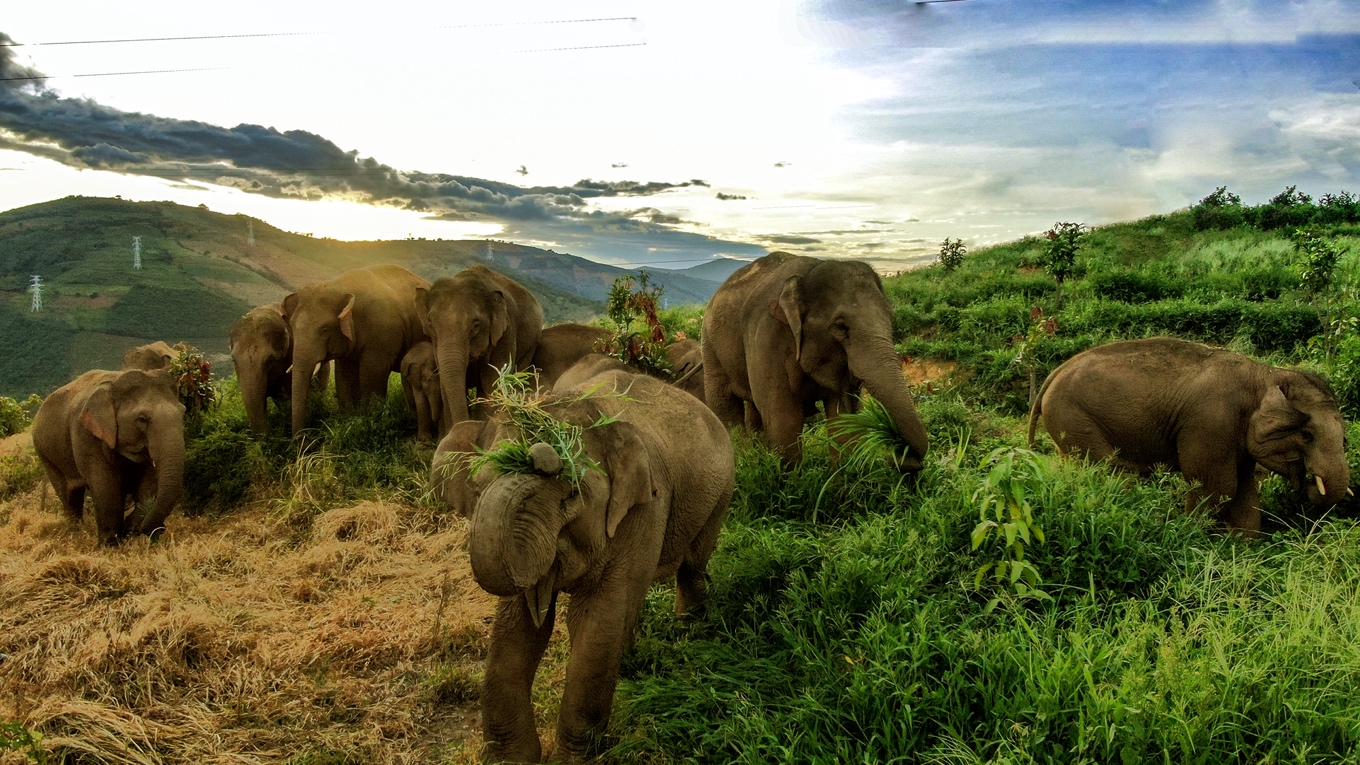 The elephants forage on a mountain during the journey. /Courtesy of Shen Qingzhong

The elephants forage on a mountain during the journey. /Courtesy of Shen Qingzhong

In terms of future protection, many experts said that policymakers should reflect on the incident to ensure a large enough habitat with abundant food for the elephants.

Both Chen and Shen echoed him. They said it is exciting to see that such an important initiative is already on the move, adding that the establishment of such a park should be balanced with the development of local communities, to promote harmonious co-existence between elephants and human beings.

Personally, the coverage of this herd of elephants has been one of the most unforgettable experience as a reporter. It is somewhat a pity that I did not meet them in reality this summer as we followed authorities' advice not to chase them out of safety concern. But I came across another herd in the reserve in late September –feeling a bit scared and excited, and I even got an opportunity to interact with some of the creatures living in a local rescue center.

Generally, the animal is both cute and fierce. And from my field investigations and interviews with all related parties, I have to say that China has made enormous efforts in the conservation of elephants during the past decades. Today, as the population of the species continues to grow, the future protection of them calls for participation of every individual of the society.

For more about the migrating elephants in Yunnan:

(Cover photo: The herd of elephants roam on a mountain during their northbound journey. / Courtesy of Shen Qingzhong. Designed by CGTN's Yin Yating)