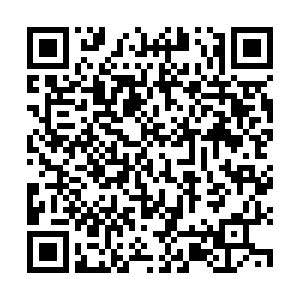 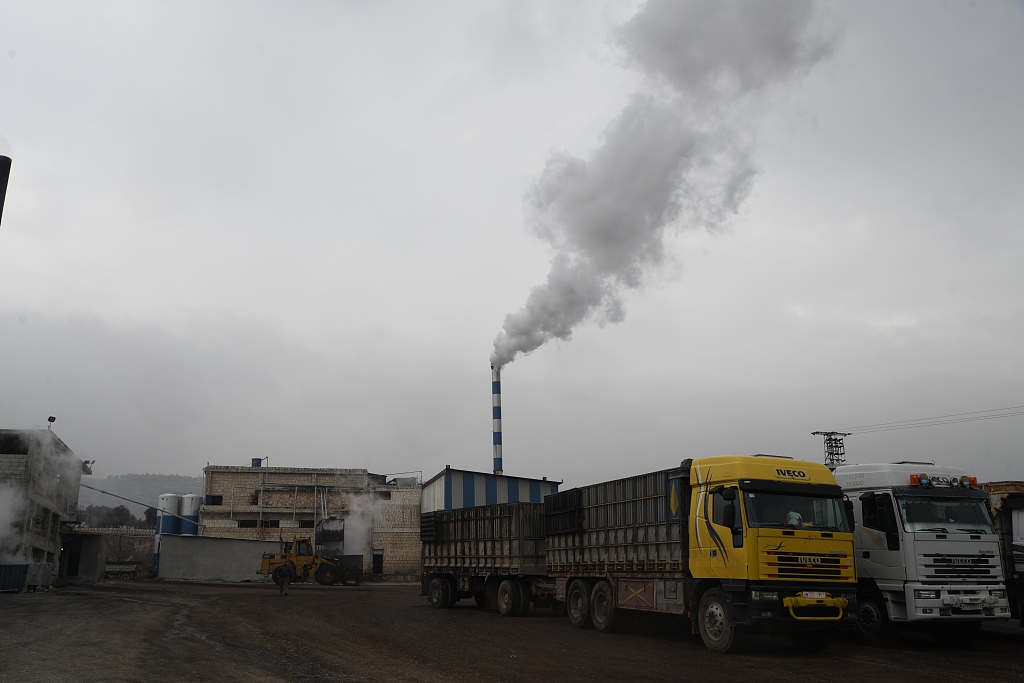 A laurel soap factory in Afrin in the countryside of Aleppo, Syria. /CFP

A laurel soap factory in Afrin in the countryside of Aleppo, Syria. /CFP

After 11 years of Syrian crisis, U.S. and Western sanctions remain a major obstacle to life returning to normalcy in the country. The economic sanctions, in particular, have crippled most factories in the war-torn country, Xinhua News Agency reported on Tuesday.

After dusting the dirt of war off of themselves and their largely shattered factories, the industrialists of Aleppo city, the commercial and industrial capital of Syria, faced the U.S. and Western sanctions that were like bullets in their feet.

At the Al-Qatirji industrial city of Aleppo, and much of the areas in the eastern part of the city, the scars of war are still noticeable, the damaged or partially destroyed buildings a visible reminder of how vicious the war was in Aleppo.

But despite the war and its destruction, life is beating strongly in that area where the sound of machines reverberates here and there amid the energetic movement of passengers, workers and cars. 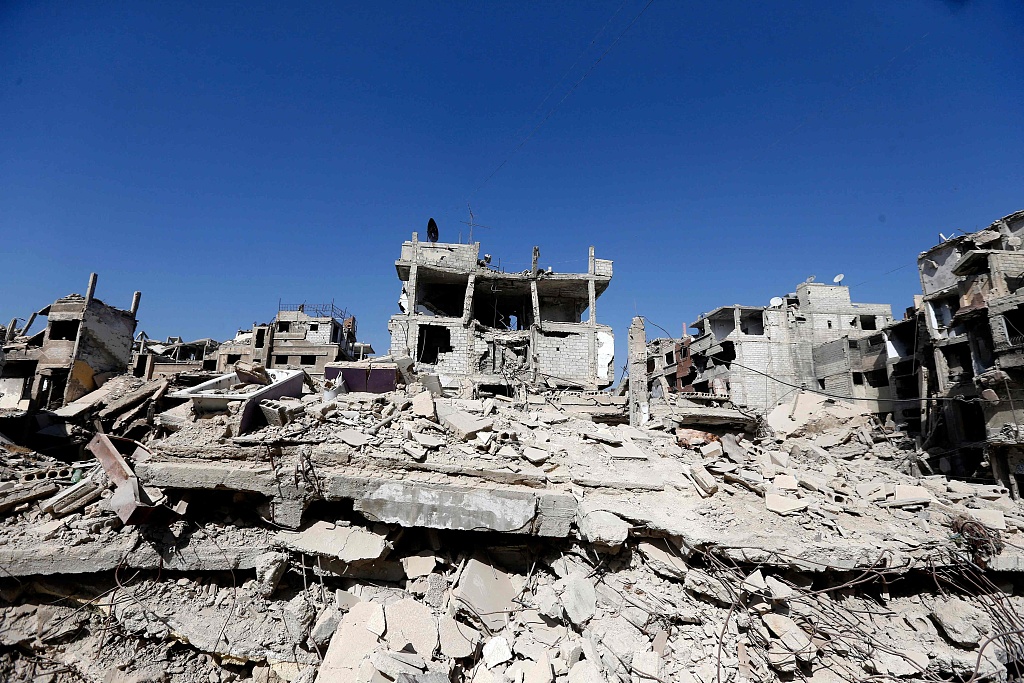 A photo of the Palestinian Yarmuk camp on the southern outskirts of the Syrian capital Damascus, October 27, 2021. /CFP

A photo of the Palestinian Yarmuk camp on the southern outskirts of the Syrian capital Damascus, October 27, 2021. /CFP

The Aleppo people are known for their dedication to labor and output. Most factories in Aleppo used to run 24 hours a day, seven days a week before the war. Their hard work earned them and their city the title of the country's industrial and commercial capital.

When the battles in Aleppo city came to a halt in late 2016, the industrialists were quick to pick up the pieces and return to work, even at the lowest capacity.

The Xinhua News Agency team in Syria has been committed to visiting Aleppo every year to see how the city's situation is evolving compared to other parts of Syria.

Every year, something new is done in Aleppo; factories are rebuilt, squares are repaired and marketplaces are reopened.

The vitality in Aleppo is so contagious that there is no room for sorrow or wallowing in the past. Hard work combined with inner strength and resilience seems like a successful formula shared by the locals.

But with all the positive attitude and the willingness to emerge from under the rubble, here comes another challenge for the people in Aleppo and Syrians in general: the U.S. and Western sanctions. 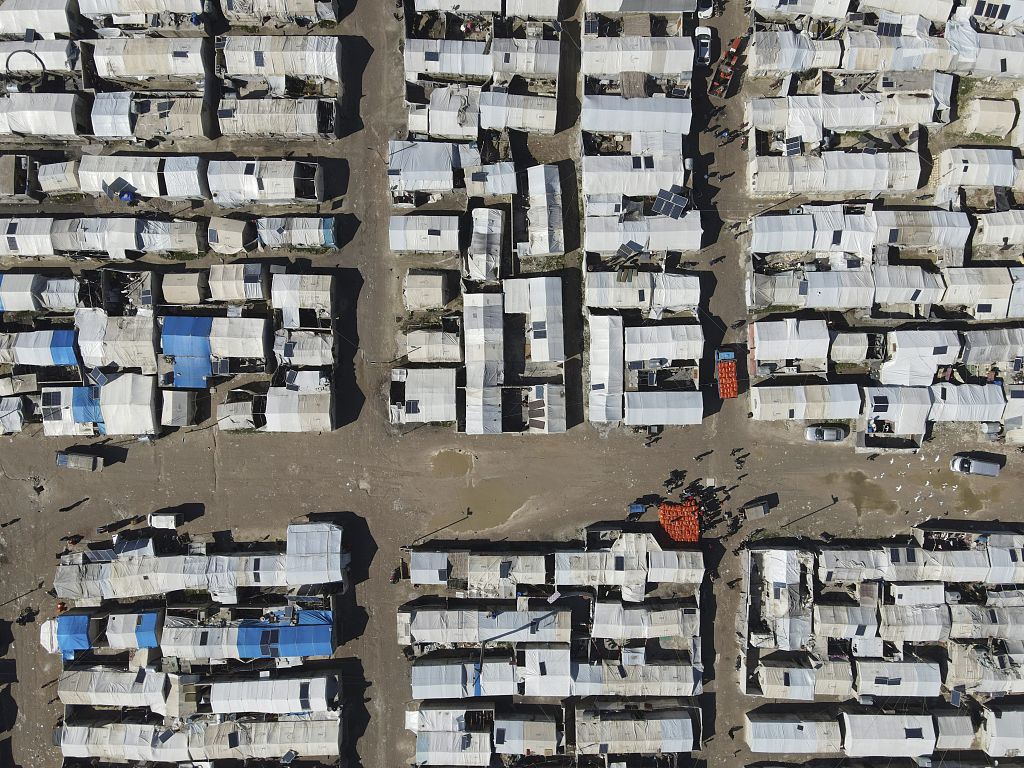 An aerial photo showing the distribution of internally displaced people's (IDP) camps in the north of Syria near the Syrian-Turkish border, February 13, 2022. /CFP

An aerial photo showing the distribution of internally displaced people's (IDP) camps in the north of Syria near the Syrian-Turkish border, February 13, 2022. /CFP

It's as if the bombings, destruction and relocation weren't enough to shatter the Syrians' spirits, so the U.S. and its Western allies decided to add to their suffering and pain by imposing crippling sanctions to prevent people from having decent lives.

As the country marks the 11th anniversary of the crisis, Aleppo's industrialists continue to struggle with the shortage of gasoline, electricity, spare parts for their equipment and the inability to export or import due to sanctions.

According to Abdul-Salam Mzayek, secretary of the Al-Qatirji Industrial Zone, Aleppo's manufacturers were quick to invest all of their savings to restore their enterprises and start from scratch.

However, he said the sanctions imposed by the U.S. and its Western allies have had an impact on industrialists, particularly those in the textile industry, who are having difficulty finding spare parts for their looms and cotton threads for their production, not to mention exporting their products due to the lack of bank transactions between Syria and the rest of the world.

"We have been severely harmed as a result of the sanctions imposed on by the U.S. and Western countries. Textile businesses have been impacted in terms of getting threads and spare components for looms," he said.

He said around 30 to 40 percent of these factories were forced to shut down.

That was just a glimpse of the suffering of industrialists in Aleppo, and it can for sure be applied to all businesses in Syria that have been affected by the sanctions, Xinhua reported. 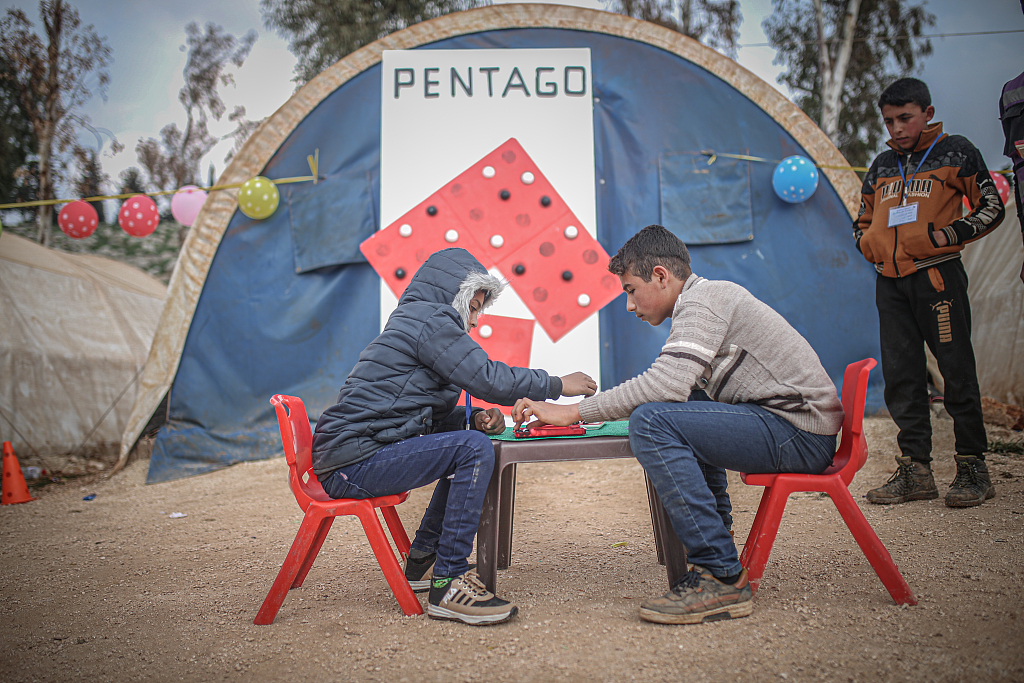 A game tournament held for children in a refugee camp in Idlib, Syria, February 28, 2022. /CFP

A game tournament held for children in a refugee camp in Idlib, Syria, February 28, 2022. /CFP

Aside from businesses suffering in the country, Syrian children also struggle with physical and psychological scars after 11 years of war.

After 11 years of Syrian crisis, "violence, displacement and lack of access to essential services continue to put children's lives at risk," the United Nations Children's Fund (UNICEF) reported on Tuesday.

About 900 children in Syria lost their lives or were injured last year, bringing the total number of children killed and injured to some 13,000 since the start of the crisis, the report said.

"Landmines, explosive remnants of war and unexploded ordnance were the leading cause of child casualties in 2021, accounting for nearly one-third of all recorded injuries and deaths, leaving many children with lifelong disabilities," it said.

UN Secretary-General Antonio Guterres on Friday called for a ceasefire in Syria in a statement marking 11 years of "brutal fighting" in the conflict-torn nation.

"We cannot fail the Syrian people. The conflict must cease. International humanitarian law must be respected," the UN chief said.

"I call on all parties to meaningfully engage in the UN-facilitated political process and appeal for further support to scale up the humanitarian response. We must choose peace," the secretary-general added.

Syria, a decade of instability