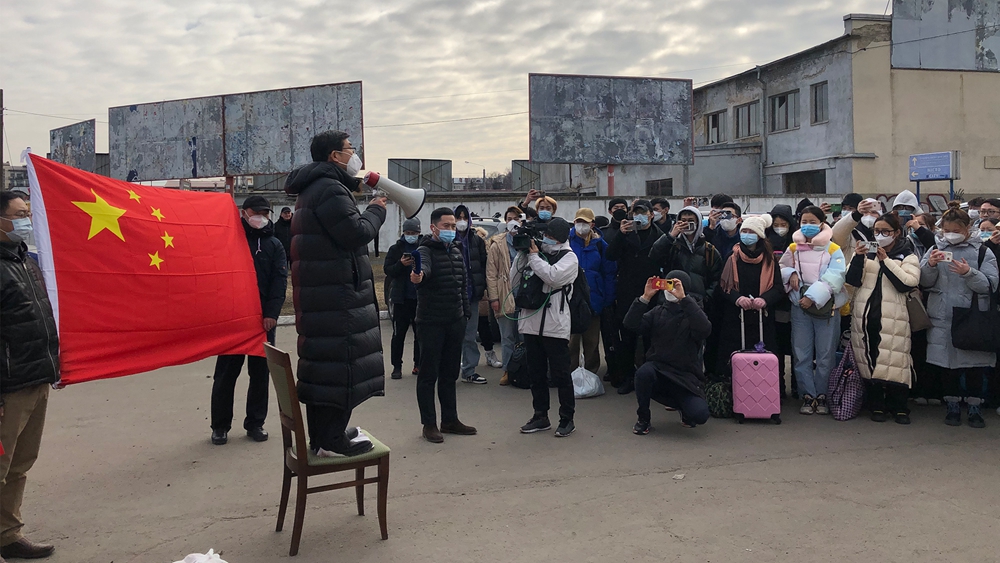 Chinese Ambassador to Ukraine Fan Xianrong (3rd L) speaks to Chinese students who have been stranded in Sumy and then evacuated to western Ukraine's Lviv, March 9, 2022. /Chinese Embassy in Ukraine

Chinese Ambassador to Ukraine Fan Xianrong (3rd L) speaks to Chinese students who have been stranded in Sumy and then evacuated to western Ukraine's Lviv, March 9, 2022. /Chinese Embassy in Ukraine

Chinese Ambassador to Ukraine Fan Xianrong said Sunday it was a miracle that no Chinese citizen died in a challenging evacuation mission in the conflict-hit Eastern European country.

Fan, wearing a bullet-proof vest, recounted breathtaking moments throughout the evacuation of Chinese citizens in an interview with the Global Times via video link.

According to the embassy, there were about 6,000 Chinese nationals in Ukraine when the conflict started on February 24. Fan said his embassy organized and led the evacuation of more than 5,000 people, with the others having managed to leave the country by themselves.

"No Chinese citizen died. It was truly a miracle," he said.

The mission, one of China's largest evacuation operations in history, completed on March 9, when the last batch of 115 Chinese students who had been stranded in Sumy under siege arrived by train in western Ukraine's Lviv, where the Chinese ambassador greeted them.

As of March 21, a total of 19 special flights had transported Chinese nationals from Ukraine to China, according to a press release by China's Foreign Ministry.

Fan, who is still in Ukraine performing his duties, described the evacuation as one of the most complex, dangerous and difficult operations. It was only made possible by coordination between the Chinese embassy in Ukraine and Chinese embassies and consulates in eight other countries, he said.

He added that assistance from Ukraine was important. "For example, to make sure Chinese citizens can evacuate from Sumy, I contacted the Ukrainian deputy prime minister more than 300 times."

The Russian side also ensured the Chinese citizens' safety during the whole evacuation, said the Chinese ambassador.

Fan said some of Ukraine's neighboring countries, like Moldova, Romania, Slovakia and Hungary, have implemented a temporary visa-free policy for people leaving Ukraine with valid passports.

Some even allowed Chinese citizens who had lost their physical documents to pass after they produced digital versions of the same on their phones, he explained, adding that these countries were showing a friendly attitude to allow something that would be "impossible" in normal times.

It also shows China's growing international influence and good diplomatic relations with these countries, he said.