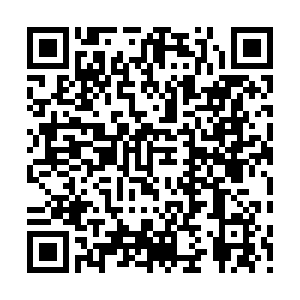 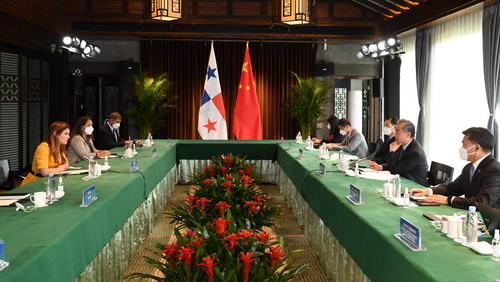 China and Panama have hailed the prospects of their relations and the potential of their cooperation as Chinese State Councilor and Foreign Minister Wang Yi and Panamanian Foreign Minister Erika Mouynes met on Monday in Tunxi, east China's Anhui Province.

In June 2017, China and Panama established diplomatic relations, with the Panamanian government recognizing that there is but one China in the world, that the government of the People's Republic of China is the sole legal government representing the whole of China, and that Taiwan is an inalienable part of China's territory.

During the meeting, the two foreign ministers agreed that it has been proved that the establishment of diplomatic relations between the two sides was correct, and has brought tangible benefits to the two peoples.

China stands ready to work together with Panama to build the bilateral ties into a fine example of mutual respect between countries of different sizes, of unity and cooperation between developing countries, and of exchanges and mutual learning between different civilizations, Wang said.

He added that efforts should be made to boost mutual political trust, pragmatic cooperation, people-to-people exchanges and multilateral coordination between the two countries.

Noting that she was the first Latin American country's foreign minister visiting China since the start of the COVID-19 pandemic, Mouynes stressed the importance Panama has attached to developing relations with China, and thanked China's support in her country's fight against the pandemic.

Panama cherishes the mutual trust with China, and will be staunchly committed to the one-China principle, Mouynes said.

Both sides also vowed to consider restarting negotiations on a free trade agreement, and strength cooperation on agriculture and food, among others.

In terms of China's relations with the Community of Latin American and Caribbean States (CELAC), Wang said China supports the building of CELAC, and its independent exploring of a development path that meets its own conditions and pursuing of foreign policies based on its own needs.

China is ready to work with CELAC to build a relationship that is equal, mutually beneficial, innovative, open and beneficial to the people, Wang said.

Mouynes said that Panama firmly adheres to the principle of non-interference in the internal affairs of other countries and that Latin American and Caribbean states are not "backyards" of any country.

She called on the Central American and Caribbean countries to transcend ideological differences and work together for common development.

On the Panama Canal

The two sides also exchanged views on the Ukraine issue.

Noting that the current geopolitical conflict has highlighted the value and strategic significance of the Panama Canal, Mouynes said Panama disapproves unilateral sanctions that are easily imposed internationally and is committed to the permanent neutrality of the Canal and hopes that China can support it.

Wang said, China respects and recognizes the permanent neutrality of the Panama Canal.

China is willing to work with the developing countries, Panama included, to practice real multilateralism, reject unilateralism, and oppose hegemonic practices, he added. 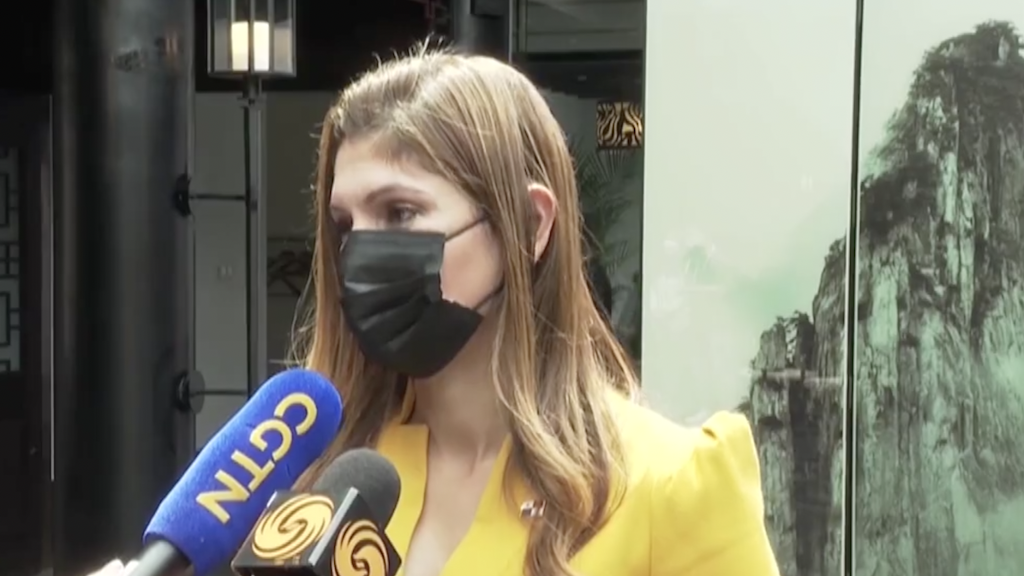 In an interview with CGTN, the Panamanian foreign minister said her meeting with Wang "went very well," and that she was excited to be in China, the first stop of her four-country tour in Asia.

Mouynes called for more trade between Panama and China, and spoke highly of the potential of cooperation in the logistics area.

"We have the Panama Canal Free Zone. Most of the products that get there and then get distributed regionally are from China," she told CGTN.