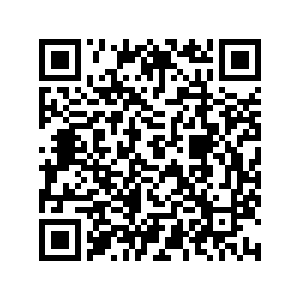 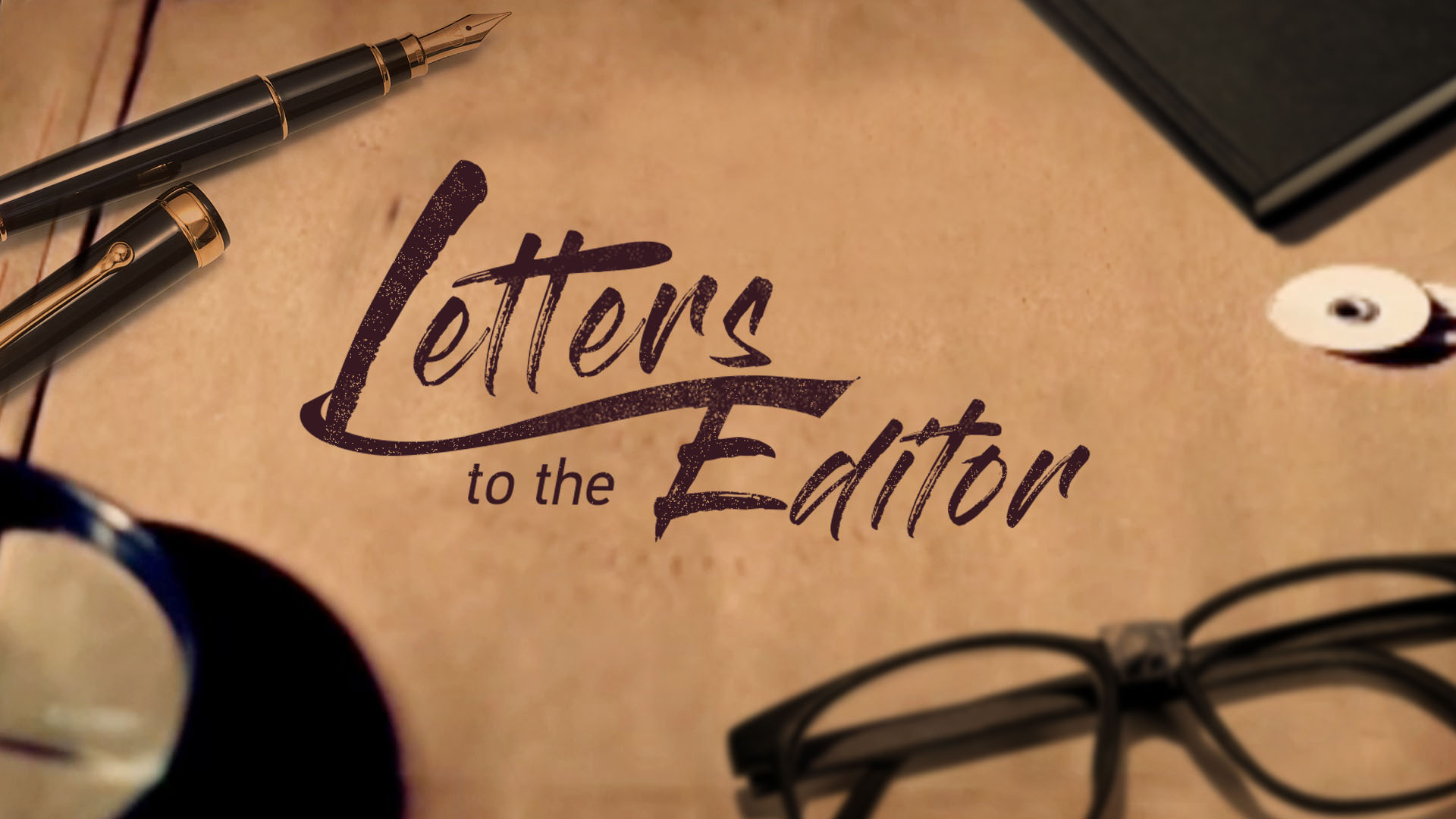 Editor's note: This is a letter from Anthony Moretti, an associate professor at the Department of Communication and Organizational Leadership at Robert Morris University, sharing his thoughts on the three taikonauts of the Shenzhou-13 manned spaceship who completed their six-month space station mission and returned to Earth safely on April 16.

On a quiet Friday evening in my part of the United States, I watched from half a world away as a red-and-white balloon slowly and steadily returned to Earth. It was a beautiful and sunny Saturday morning in Asia, and the perfect weather allowed for the global community to relish what was happening.

Mind you, this was not just any balloon. It was attached to a container carrying three taikonauts home, following their incredibly successful six-month stay in space.

As mission commander Zhai Zhigang, Ye Guangfu and Wang Yaping safely landed in north China's Inner Mongolia Autonomous Region, I had a sense of what Americans must have felt in 1969 when Neil Armstrong and his colleagues touched down on the Moon. No, they were not the first Americans launched into outer space, but their accomplishment – the first people to ever walk on the Moon – ensured they would be remembered for generations to come. They were American heroes.

Now, the Chinese people have their taikonauts who will be written about often and fondly in the future. Recognizing that the U.S. and the Soviet Union/Russia have dominated space exploration for decades, the ongoing efforts by the Chinese to become significant players in understanding what exactly is out there has added to the excitement the Chinese people have felt about this and other Chinese-led missions to space.

In other words, there are more Chinese heroes still to come. But make no mistake, Zhai Zhigang, Ye Guangfu and Wang Yaping are heroes, primarily because never in the country's history had taikonauts spent more time in space than they had. And there was additional interest in their mission at home and abroad because Wang Yaping was the second Chinese woman in space.

The images of her handing a star to her daughter as they embraced on Saturday in Beijing will be one shared with young Chinese boys and girls for years to come. The message that likely will accompany that photo: You, too, can reach for the stars, and it is possible you will reach them.

There are a few constants among the people of our world, but one of them is a fascination with space. Think about how often children lift their heads and stare at the sky. Whether they are looking at the Moon, trying to identify a particular star or simply wondering what other life forms might exist out there, the look in their eyes is magical. Their creative and inquisitive young minds are dreaming and thinking; if we as adults are lucky to be standing near them, we cannot help but remember when we did the same thing when we were their age. 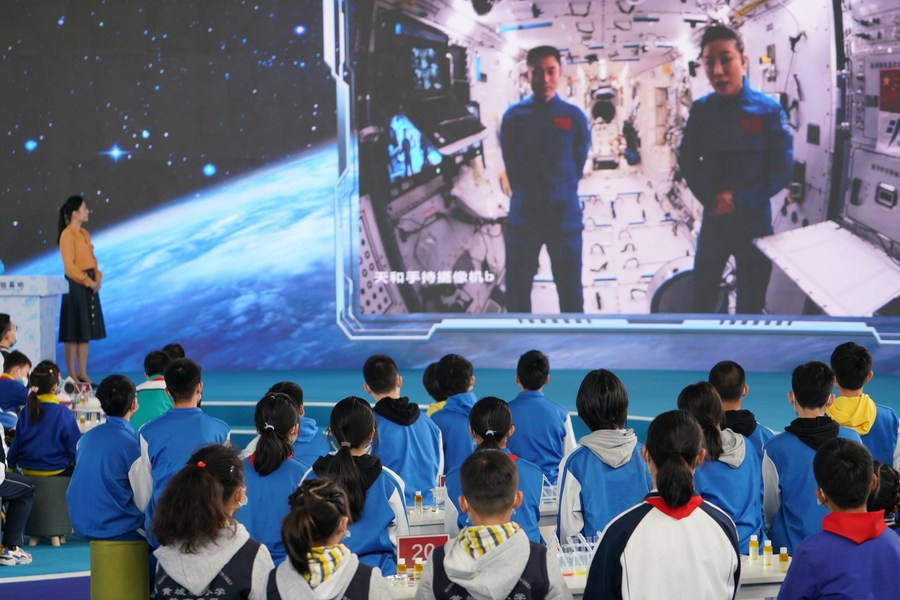 Students attend a livestream on popular science given by Chinese astronauts aboard China's space station Tiangong, at the China Science and Technology Museum in Beijing, China, March 23, 2022. /Xinhua

Students attend a livestream on popular science given by Chinese astronauts aboard China's space station Tiangong, at the China Science and Technology Museum in Beijing, China, March 23, 2022. /Xinhua

Sure, that awe often ebbs as we grow older, but we still celebrate when we see our fellow citizens roar into space. On October 16, 2021, the three abovementioned taikonauts did just that. Hours later, they arrived at the Tiangong space station, where important experiments were to be carried out over the 183 days they would remain there.

Perhaps the most talked about part of their mission took place on November 7, when Wang Yaping became the first female taikonaut to take part in a spacewalk, which lasted over six hours. Yang Yuguang, vice chair of the Space Transportation Committee of the International Astronautical Federation, told the Global Times newspaper that "we are witnessing history" because of Wang Yaping's bravery and that more female taikonauts would engage in similar extravehicular activities in the future. But Wang Yaping will always be the first, and that accolade ensures she will be an inspiration, most especially to Chinese girls, for decades.

In understanding the symbolic value of the Shenzhou-13 mission, keep in mind that when it began critics were easy to find in the U.S. The sentiment designed to question China's intentions about space exploration started months earlier. In June 2021, roughly four months before Shenzhou-13 lifted off, I wrote a piece, in which I noted that a separate Chinese space mission had led the White House to begin "issuing its latest set of warnings that if China cannot be trusted down here on Earth, well, then it cannot be trusted up there in space either."

I criticized one U.S. senator who bemoaned that America did not own space any longer. I challenged Senator Angus King to remember that "anyone who examines U.S. history records will never find any paperwork indicating America ever owned space. And with good reason: It never did, and it never will. The same goes for Russia, Japan, China, and any European nation that has been active in space exploration. Outer space belongs to no country. However, the exploration of it – no matter the country undertaking that mission – stands to benefit all of humanity."

So, from half a world away, congratulations to Zhai Zhigang, Ye Guangfu and Wang Yaping for doing your part to guarantee that all of humanity will benefit from your intelligence, determination, skill and curiosity. In China, you are heroes. And although I am no longer a child, I still think of you as heroes.