Download
Sanctions and pushbacks: Where will this lead Russian and global economic recovery?
By Yao Nian, Zhao Hong 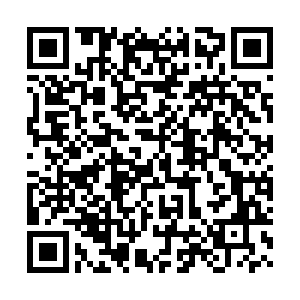 The escalating sanctions imposed by the West against Russia will not change Russia's actions in Ukraine, but instead add risks to global economic recovery through food and energy inflation, with emerging markets and developing economies more vulnerable to the pressure, experts said.

Since Russia's conflict with Ukraine that began in February, Western countries led by the U.S. have imposed an unprecedented array of sanctions against Russia, including removing some Russian banks from SWIFT, travel bans, asset freezes, and restrictions on trade and investments.

"Sanctions are generally ineffective when it comes to changing the strategic behavior of states," Josef Gregory Mahoney, professor of politics and international relations at East China Normal University, told CGTN.

Hitting back at the Western sanctions, Russia has adopted a list of restrictive measures, including imposing export bans, servicing its external debts in rubles, limiting the outflow of capital, nationalizing assets of foreign firms that leave the country and restricting foreign ships from Russia's ports. 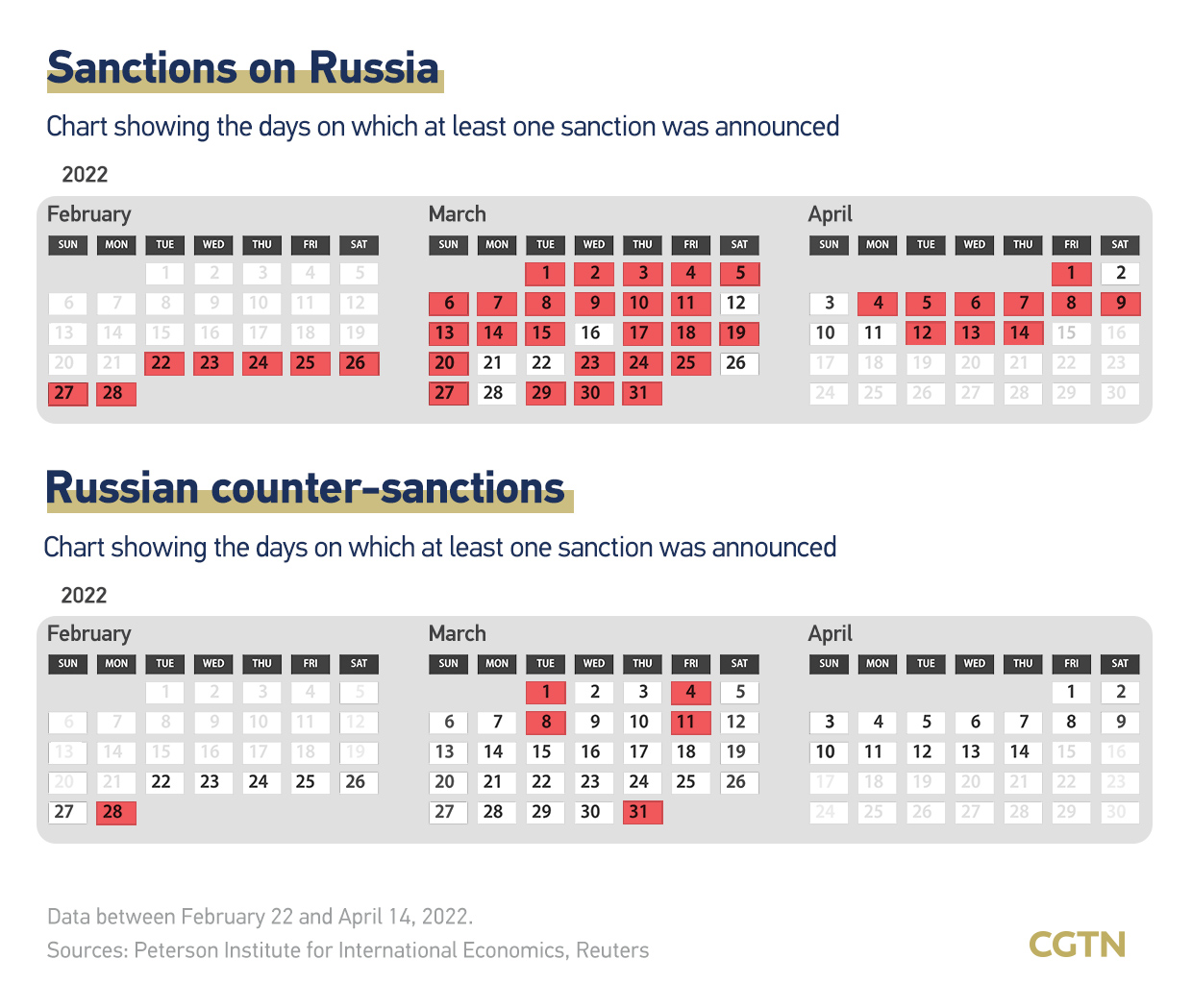 Russian President Vladimir Putin said in March that there had been no alternative to its military operation in Ukraine and that the country would not accept compromising its sovereignty for short-term economic gain.

"The harder they [the West] bite the Russian economy, the harder Russia will bite Ukraine, with broader economic and security implications for other countries," Mahoney added.

Global economic uncertainty has surged in the first quarter from the Russia-Ukraine conflict, which could significantly reduce global economic growth by up to 0.35 percentage point this year, noted the International Monetary Fund (IMF) in its blog last week.

To counter mounting inflation pressure, "the European Central Bank and the Federal Reserve may have to hike interest rates significantly, which can drag their economy into a prolonged recession," Wang Dan, chief economist at Hang Seng Bank China told CGTN.

Russia becomes the most sanctioned country

Unlike the sanctions on Iran, which were incremental, the Western sanctions on Russia started at a much higher level, said Wang. 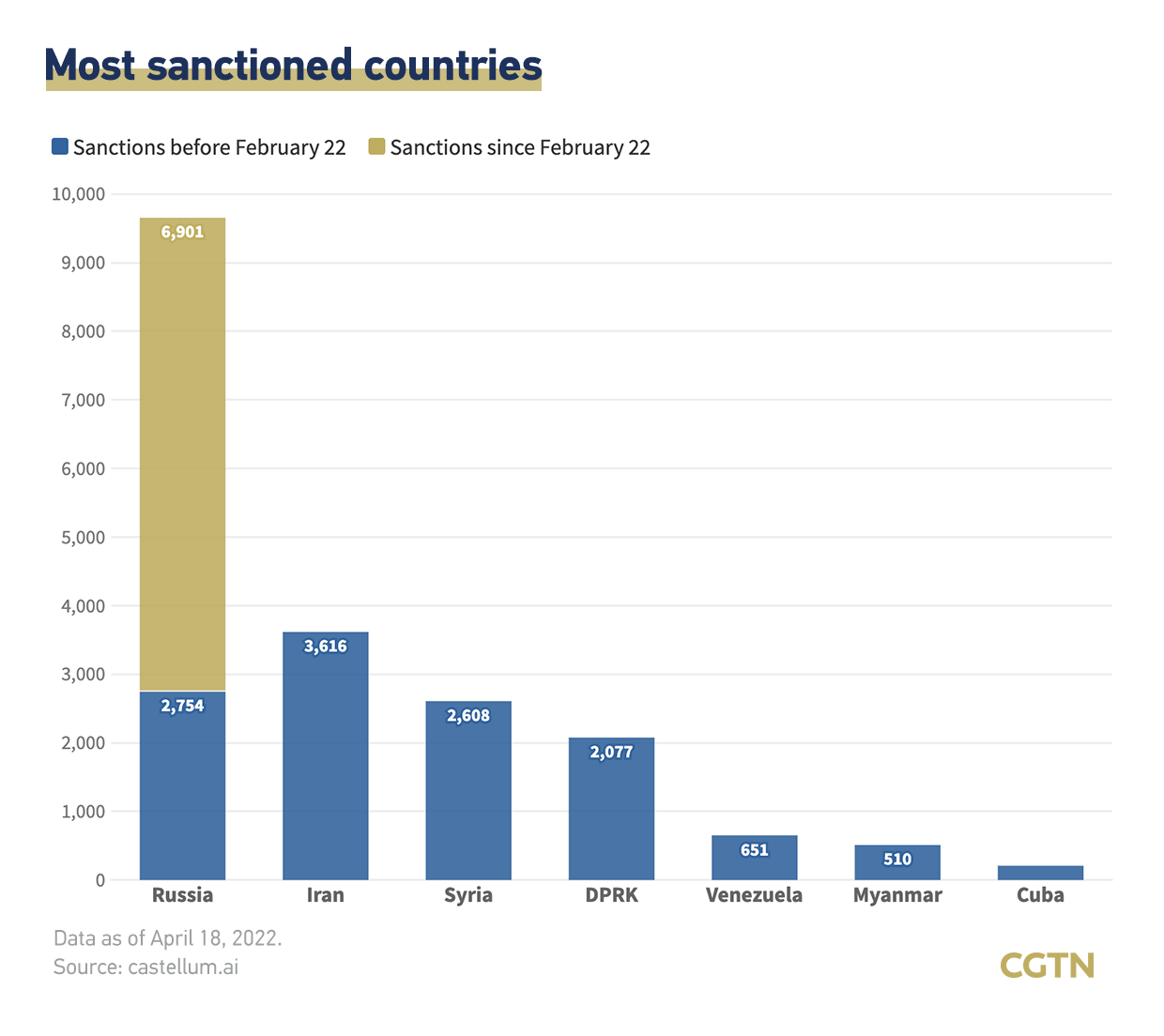 Russia is now the most sanctioned country in the world. Massive sanctions have been imposed on Russian banks, financial institutions, major state-owned enterprises, business oligarchs close to Putin, and government officials and their family members, with nearly 6,000 Russian individuals and over 900 entities affected.

In terms of financial measures, foreign sanctions have frozen around $300 billion out of $640 billion of Russian gold and forex reserves. The U.S. also slapped sanctions on the Russian Direct Investment Fund, a sovereign wealth fund worth $10 billion.

In the energy sector, the U.S. has banned all oil and gas imports from Russia, and the UK has committed to phasing out imports of Russian oil by the end of 2022. The EU is also drafting a phased Russian oil embargo, and Germany has halted the Nord Stream 2 gas project that had been set to add Russian supply. 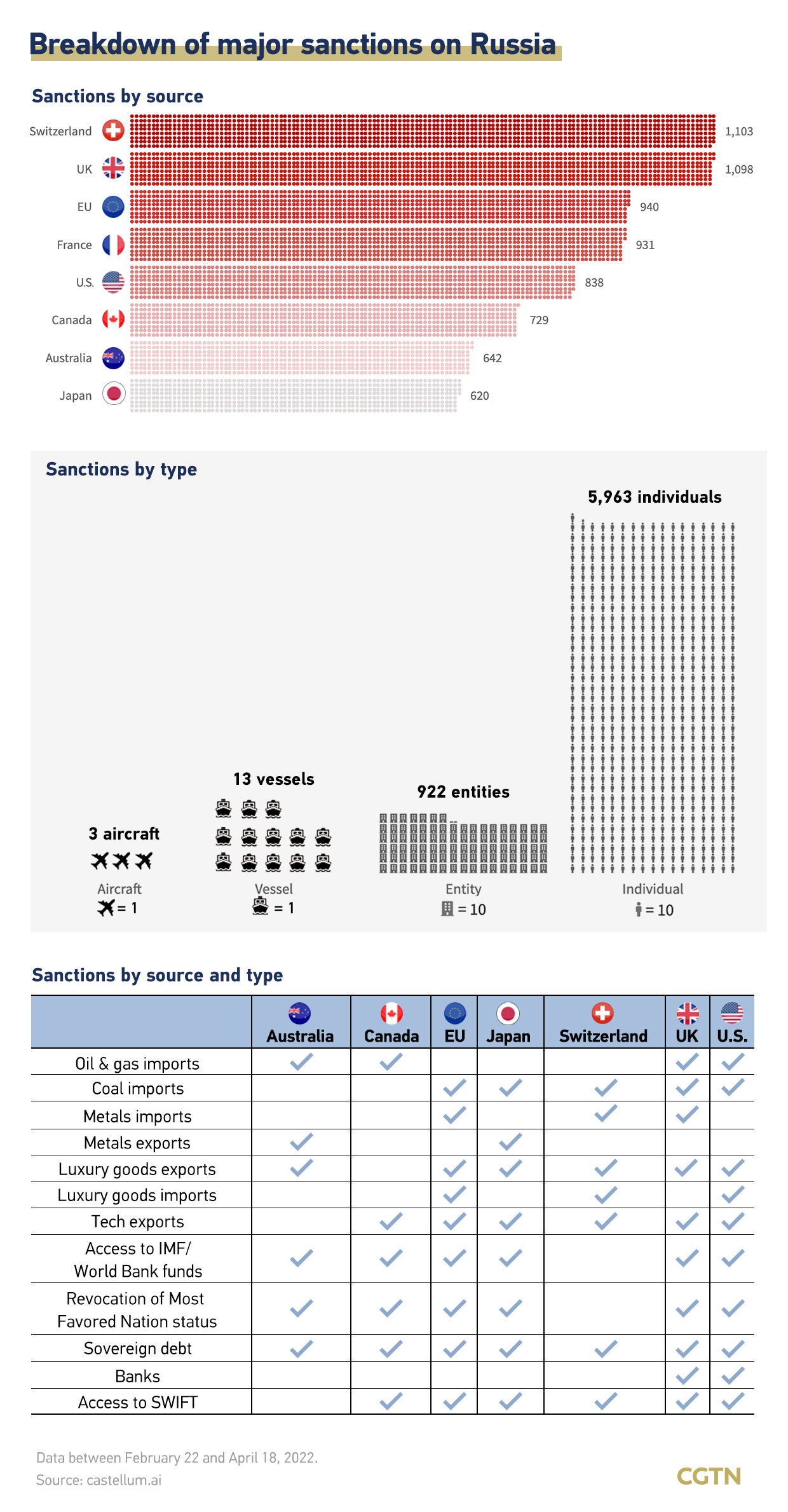 "Sanctions on Russia's oil have led to many actors in other industries to self-sanction, including transport, banks, retail, and tanker companies," Wang said.

Large companies and organizations around the world from sectors including technology, airlines, finance, consumer, automakers, manufacturers, sports and logistics have also imposed sanctions. For example, McDonald's, Coca-Cola and Starbucks have suspended trading in Russia.

Among tech companies, Nokia is pulling out of the Russian market, while Intel and Ericsson have suspended business operations in the country. Samsung, Microsoft and Apple have paused shipments and sales to Russia, while Netflix, TikTok and Spotify suspended services there.

Led by the U.S., the West also imposed sweeping restrictions on technological exports to Russia in an effort to cut off the country's access to technology parts like semiconductors that are needed in military operations.

The Western sanctions against Russia are nothing new. Since Russia's conflict with Ukraine over Crimea in 2014, Western countries have imposed economic sanctions on Russia by freezing assets and imposing trade embargoes, involving key sectors such as energy, finance, science and technology, defense and military industries.

"There are some questions, problems and difficulties, but in the past we have overcome them, and we will overcome them now," Putin said in March.

Sanctions imposed in 2014 had an estimated impact on Russia's GDP ranging from a low of 1 percent to a high of 8 percent, according to Mahoney. "Modest to minimal sanctions tend to work only marginally," he said. "And of course, they did not dissuade Russia from additional conflict in Ukraine."

Russia has worked to sanctions-proof its economy since 2014, and many Russians proved "relatively immune," Mahoney said.

The professor explained, "An estimated 25 percent of the Russian population lives in rural areas under near subsistence conditions, and many urban working class Russians avoid foreign products and international travel."

"This meant that middle class professionals were the most affected, but the Russian political system was able to withstand their sporadic protests," he said.

"However, when sanctions are stronger and more effective, they tend to induce more desperate responses," Mahoney added.

After the Crimea crisis in 2014, Russia launched MIR – a domestic payment system – to sidestep the necessity of making VISA or MasterCard payments, according to Mahoney.

"Russia pursued other programs of self-sufficiency, for example, building up its domestic dairy industry," said the professor. The country has started building trade relations outside Europe, especially with Latin America, he said. "It has also imposed strict fiscal discipline and saved money … and found effective ways to fight inflation."

Mahoney said Russia has moved to de-dollarize its central bank assets, shifting towards gold, renminbi and the euro since 2018, and that it has largely divested itself from American securities and significantly increased holdings in Chinese securities.

In response to the sanctions since February, Russia has imposed export bans on more than 200 products, including telecoms, medical, vehicle, agricultural, electrical and tech equipment, until the end of 2022. The export bans will affect 48 countries, including the U.S. and those in the EU.

Russia has also threatened to nationalize the assets of foreign companies that have shut down business operations in the country. Companies like Volkswagen, Mercedes-Benz, Porsche, Toyota, IKEA, Apple, Microsoft, McDonald's and Shell have been included on the blacklist.

The IMF has cut global growth estimates for both 2022 and 2023, as economies were under pressure from higher food and fuel prices due to the Ukraine crisis, Managing Director Kristalina Georgieva said last week.

Ukraine and Russia have been major exporters of food and energy, but their supplies to the global market have been disrupted by the conflict as well as the Western sanctions against Russia. Global fuel prices have shot up since the conflict, according to Wang.

"There is a shortage of Russian crude in the global market, no single country or a combination of countries can make up the loss," Wang said.

The Organization of the Petroleum Exporting Countries (OPEC) also warned last week that sanctions on Russia could result in one of the worst ever oil supply shocks and it would be impossible to compensate Russian supply loss.

"Gasoline prices accounts for half of the U.S. inflation. As Russia reduces its gas export to Europe, European inflationary pressure is mounting," said Wang, adding that the West has shifted their strategic focus from energy transition to energy security in response to the conflict.

Food security has been damaged in several countries in the Middle East and North African countries that rely on Russian and Ukraine exports of wheat and sunflower seeds, while other countries suffer from the secondary price effect in the global food market, according to Wang.

"Prices for all staple grains have gone up as countries try to stockpile. Russia is also a largest fertilizer exporter. As it suspends fertilizer export, major grain producers including Brazil will cause a drop in harvest later in the year," she said.

Analysis: What's behind crises in Sri Lanka and Peru?

"Food inflation globally may stay at a high level throughout the rest of 2022," Wang added.

Georgieva said countries that are struggling to recover from the still-raging COVID-19 pandemic would suffer a massive setback caused by the Ukraine crisis, and the IMF would downgrade its growth outlooks for 143 economies, which is 86 percent of global economic output.

The World Bank expected Ukraine's economy to shrink by 45.1 percent this year, while Russia's economy is projected to contract by 11.2 percent in 2022.