Download
Graphics: What do we know about the DPRK's frequent missile tests?
By Pan Zhaoyi 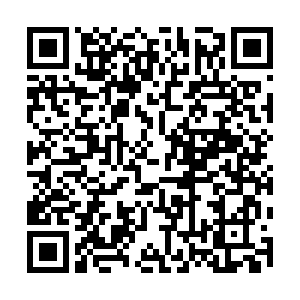 The Democratic People's Republic of Korea (DPRK) fired a ballistic missile on Wednesday, just days ahead of the start of two-week military drills between the U.S. and the Republic of Korea (ROK) on May 9 and the inauguration of the ROK President-elect Yoon Suk-yeol on May 10.

Since the start of the year, Pyongyang has conducted a dozen projectile tests, including "a new type of intercontinental ballistic missile (ICBM) Hwasongpho-17" on March 24.

DPRK leader Kim Jong Un said the country would be "fully ready for long-standing confrontation with U.S. imperialists" during an on-site inspection of its ICBM launching test, according to a Korean Central News Agency report. 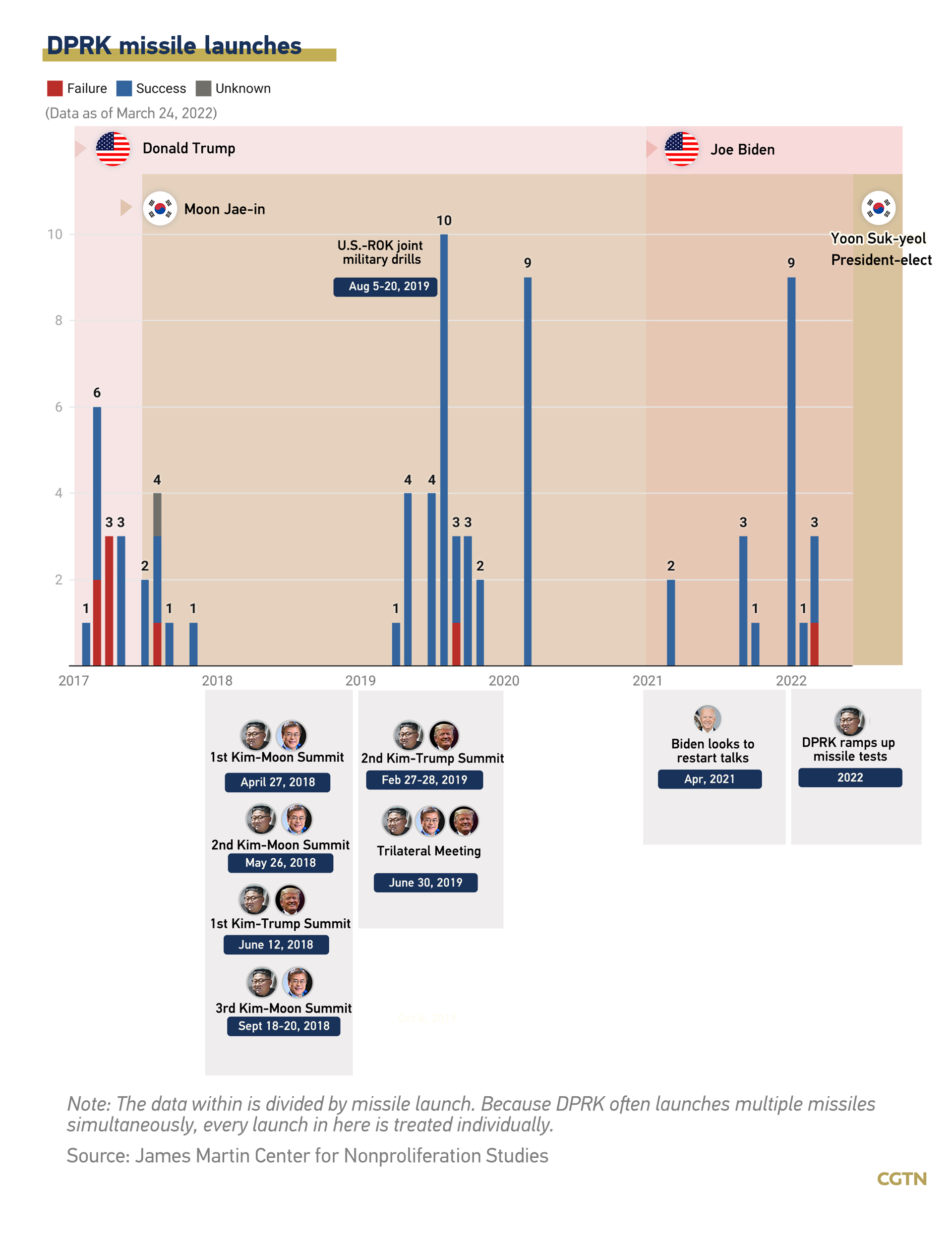 Tensions on the Korean Peninsula have heightened as Pyongyang ramps up its missile tests. Analysts from the Washington-based Center for Strategic and International Studies say each test has taken Pyongyang closer to its goal of developing a credible, survivable nuclear weapons delivery system that can target the U.S. homeland.

Nuclear negotiations concerning the Korean Peninsula have proceeded in fits and starts for decades. The latest major developments were several meetings between leaders of the DPRK, the ROK and the U.S. in 2018, when Pyongyang did not launch a single projectile.

But the short-lived diplomatic overtures ended with the collapse of a summit between Kim and then U.S. President Donald Trump in 2019 due to their differences on denuclearization and sanctions relief.

U.S.-ROK joint military drills in August of that year further fueled Kim's anger, as Pyongyang had long condemned the exercises as a rehearsal for war.

Both sides continued negotiations, but working-level talks between Washington and Pyongyang in October 2019 ended with no agreement.

An unnamed spokesperson of the DPRK's foreign ministry said that they have no intention to hold such "sickening" negotiations before the U.S. takes a "substantial step" to implement the complete and irreversible withdrawal of a "hostile policy" against it, which includes sanctions and military exercises with Seoul, according to a Yonhap report. 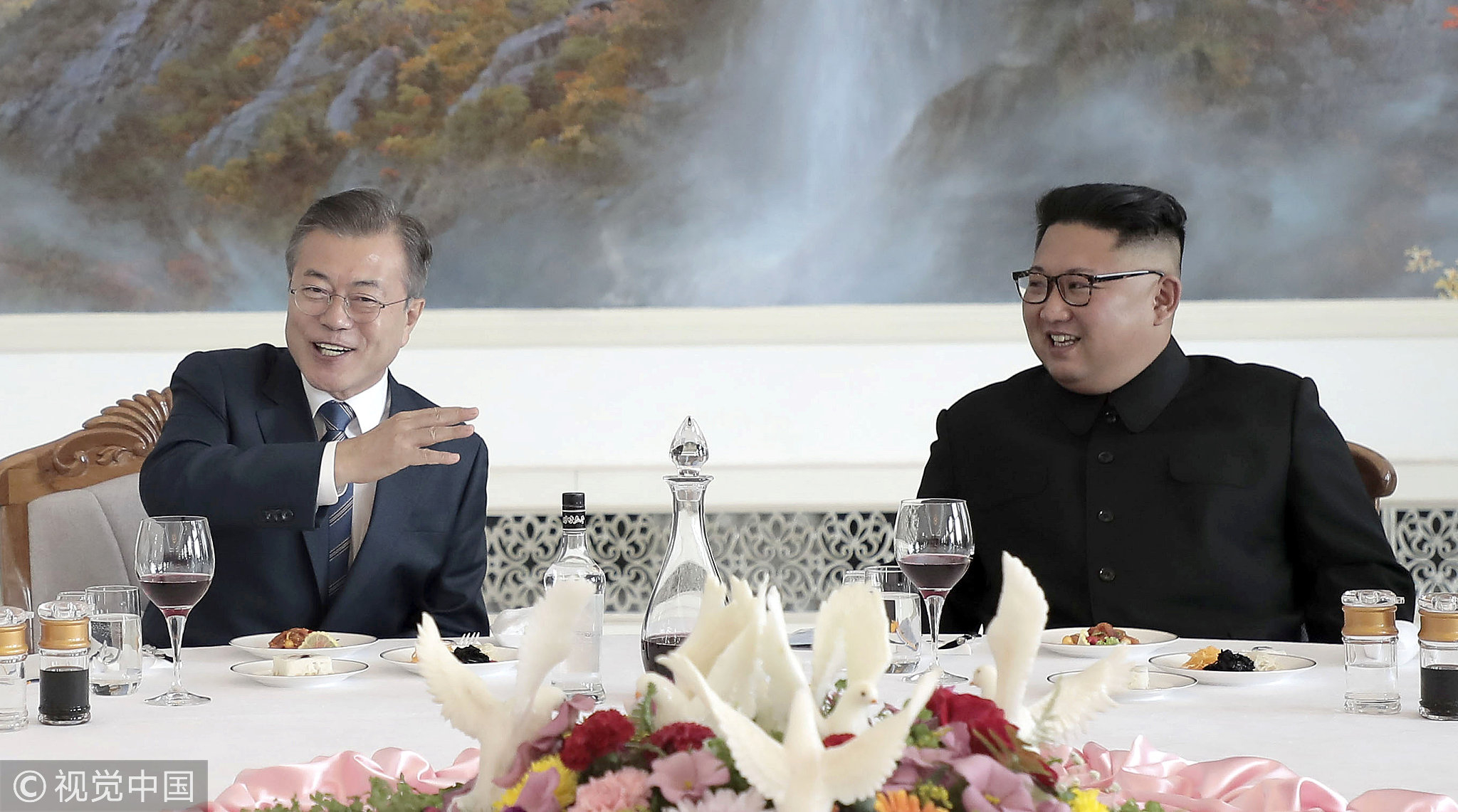 Diplomatic ties in the new era

During the first year of U.S. President Joe Biden's administration, Pyongyang carried out a relatively low frequency of missile tests compared to that of Trump's first year.

Experts said this was perhaps due to the DPRK's domestic difficulties aggravated by the COVID-19, or they were waiting to see if new policies emerged from the Biden administration.

Biden, meanwhile, has expressed his willingness to continue negotiations with DPRK. But he also told the media that he would not continue direct personal diplomacy with Kim and would tighten sanctions until Pyongyang has given up all of its nuclear and missile programs.

In a joint statement by the U.S. and the ROK on May 21, 2021, Biden affirmed the U.S. commitment to provide extended deterrence using its full range of capabilities and to maintain joint military readiness.

The ROK's incoming president Yoon Suk-yeol said during his election campaign that he would strengthen the alliance with the U.S. and respond firmly to the DPRK's nuclear and missile threats.

During talks between Yoon's foreign policy and security aides and their U.S. counterparts in Washington last month, the ROK side sought redeployment of U.S. strategic assets, such as nuclear bombers and submarines.

Most of the weapons launched by Pyongyang in the past five years were short-range projectiles. They also tested the most powerful ICBMs in 2017 and 2022. 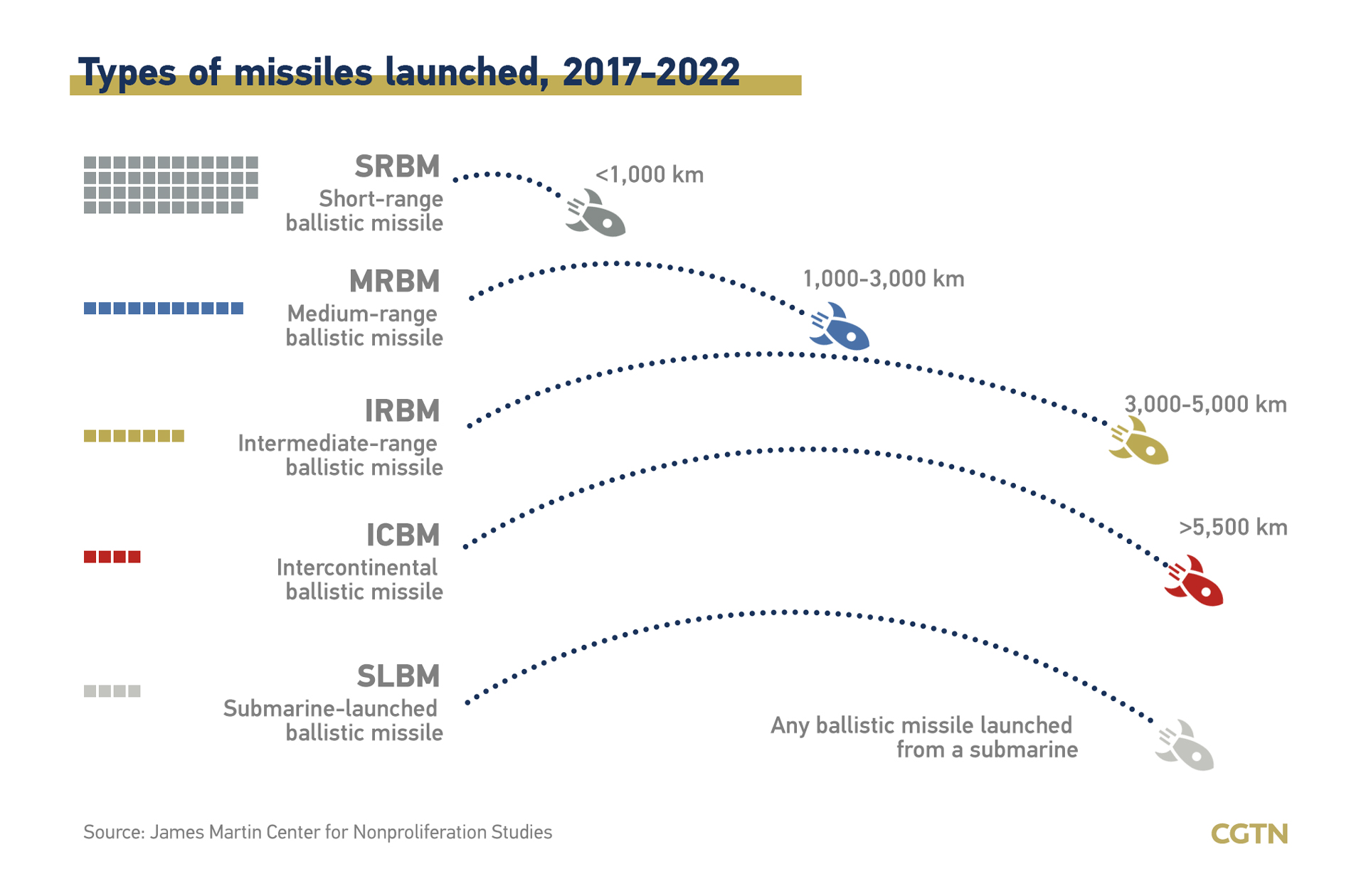 The latest Hwasongpho-17, which has been shown on a transporter vehicle with 11 axles, is a "significant milestone" for DPRK's nuclear arsenal, Ankit Panda from the Carnegie Endowment for International Peace told the BBC.

The size has prompted analysts to speculate that it will be designed to carry multiple warheads and is potentially able to reach anywhere in the U.S.