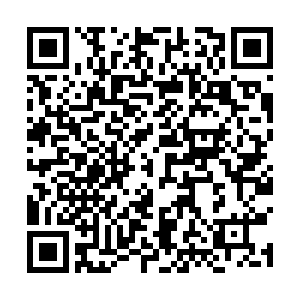 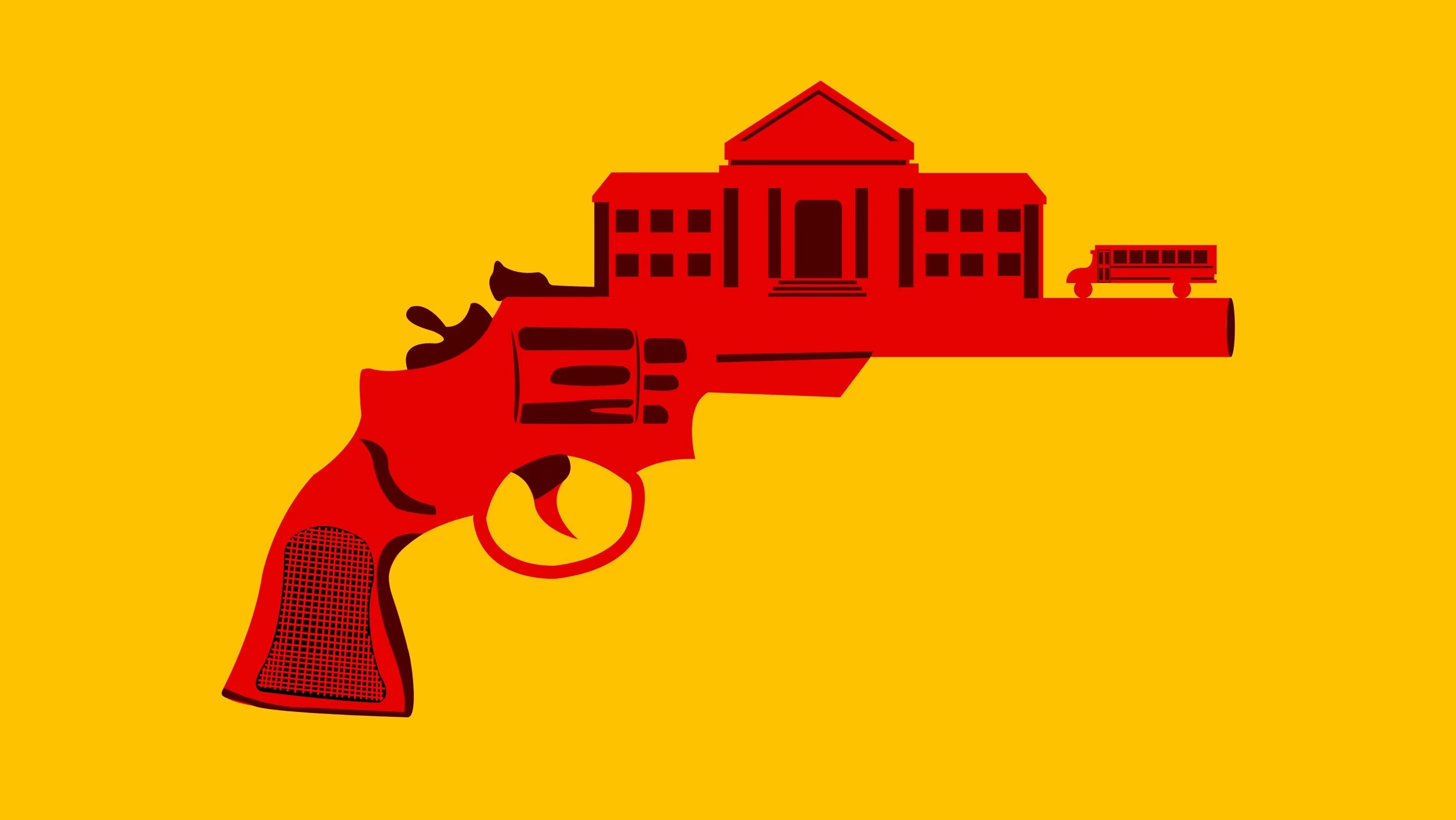 Months before the 10th anniversary of the deadly shooting at Sandy Hook Elementary School, two mass shootings in the span of less than two weeks have Americans once again shocked and horrified at the country's longtime failure to tackle gun violence.

Before Texas, there were 26 school shootings resulting in injury or death in the U.S. this year, according to Education Week, which tracks shootings at schools in which there are any firearm-related injuries or deaths. Six people, five of them students, were killed in those shootings.

"What is striking to me personally is how similar the pattern seems to be with all the shooters and how many opportunities are missed in getting them help or stopping the violence before it occurs," Ron Avi Astor, professor of social welfare at the UCLA Luskin School of Public Affairs, told CGTN.

"The obsession with guns, buying large numbers of military and other style guns at age 18, and long histories of difficulties with mental health, community, and school."

Since the 1980s, perpetrators behind mass shootings in the U.S. have gotten younger, according to a database maintained by Mother Jones, which tracks indiscriminate rampages in public places resulting in four or more victims killed by the attacker. In recent years, those who commit mass shootings have just passed puberty. 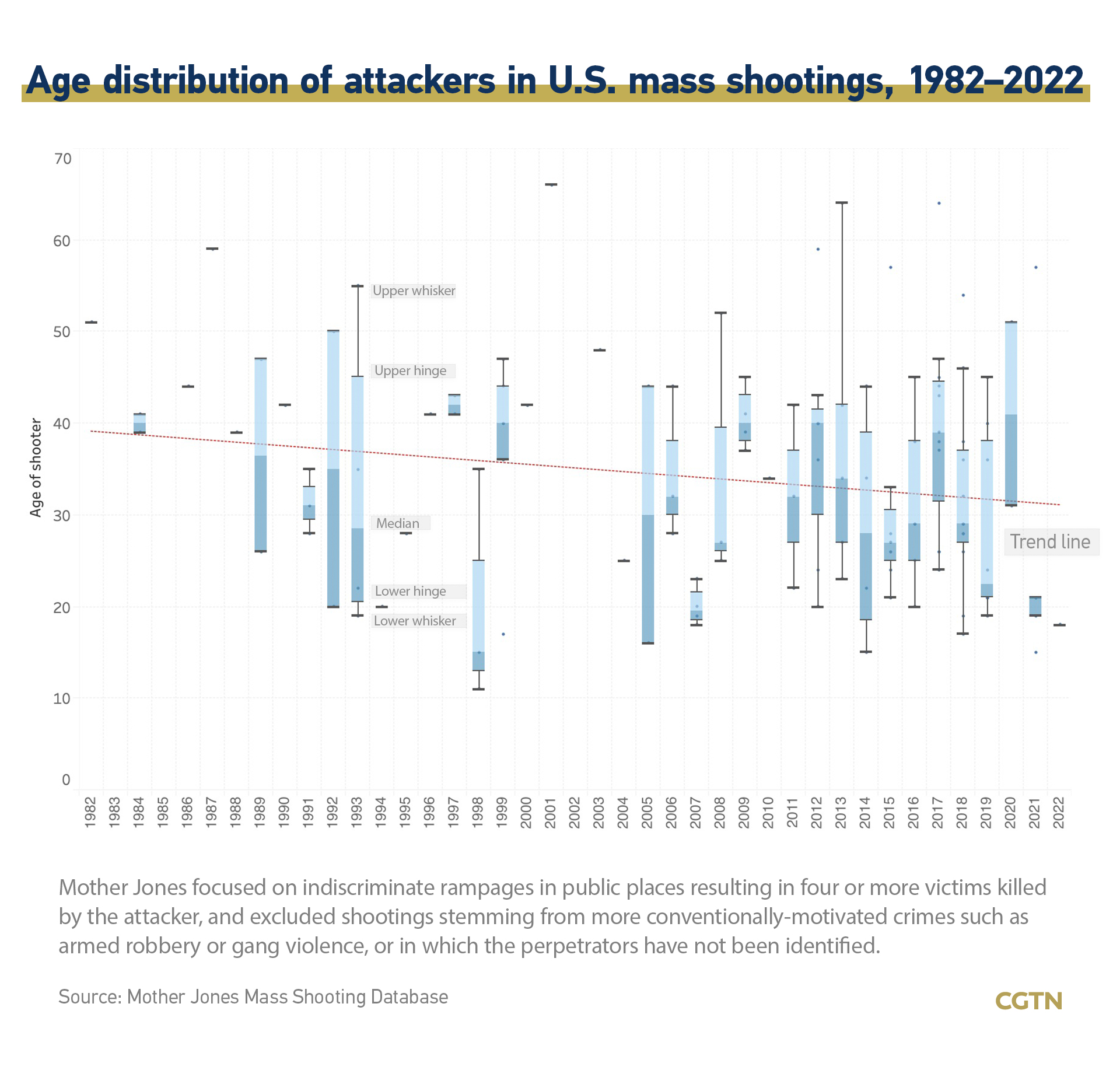 Among America's deadliest classroom gun massacres over the past two decades, from Columbine High School in 1999 to Robb Elementary School this week, the age of shooters has been 17-20 years old.

Previous attempts to profile school shootings perpetrators by both the U.S. government and research institutes have described shooters as alienated, middle-class, White males who have access to guns. In fact, males account for almost 95 percent while the chances of them being Caucasian is 61 percent, according to a study of K-12 shootings by the Brookings Institution. Almost half of them report a history of rejection, with many experiencing various forms of bullying at school.

"I feel rejected, rejected, not so much alone, but rejected. I feel this way because the day-to-day treatment I get usually it's positive but the negative is like a cut, it doesn't go away really fast," wrote 16-year-old Evan Ramsey before going on a killing spree with a shotgun at Bethel Regional High School in 1997 that resulted in two deaths and two injuries.

These K-12 shooters also tend to have a history of mental and psychological issues such as depression, bipolar disorder and psychotic episodes. As criminologists James Densley and Jillian Peterson noted in The Conservation, most school shooters are motivated by a generalized anger. Their path to violence involves self-hate and despair turned outward at the world, and they often communicate their intent to do harm in advance as a final, desperate cry for help.

How is Biden dealing with gun violence 'epidemic' since he took office? 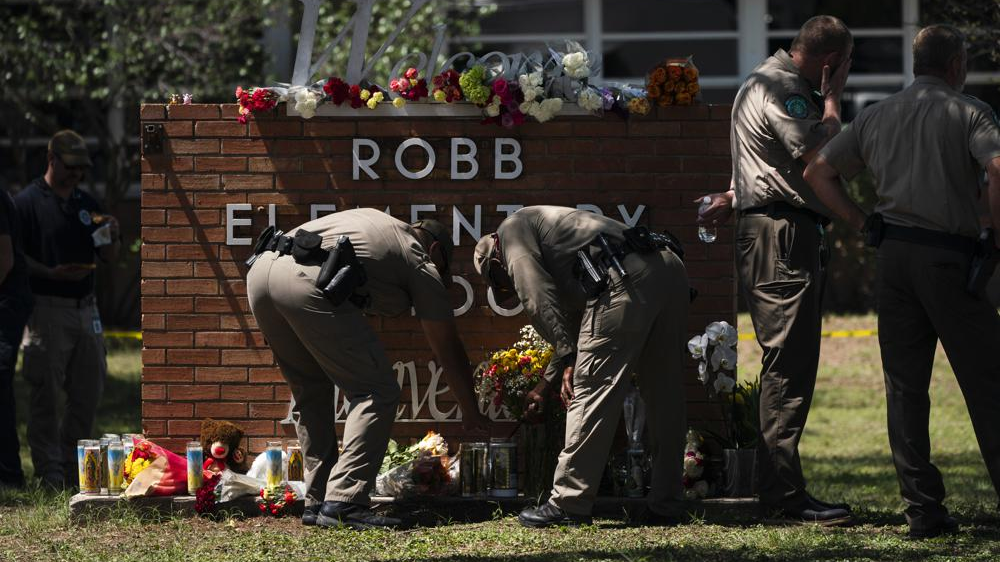 Flowers and candles at Robb Elementary School in Uvalde, Texas, Wednesday, May 25, 2022. /AP

Flowers and candles at Robb Elementary School in Uvalde, Texas, Wednesday, May 25, 2022. /AP

In the case of Texas shooter Salvador Ramos, he has been described by the few friends he had as a loner prone to violence and irregular outbursts of emotion which were the results of bullying he experienced throughout his life. Before going on the rampage, Ramos wrote on Facebook to a teenage girl overseas that "I'm going to shoot my grandma" and then, after doing so, wrote "I shot my grandma," according to Texas Governor Greg Abbott. Less than 15 minutes before arriving at Robb Elementary School, he wrote, "I'm going to shoot an elementary school."

"I'm hoping we can push to get sensible gun laws to restrict military assault-type weapons, background checks, and laws that make it easier for law officials to take guns away from those with suicidal or homicidal obsessions," Astor says.

"However, most importantly, we need a deep discussion and reckoning on whom we'd like to become as a people and what our schools should look like so that we can provide support to students and individuals before these tragic events happen."