Download
Graphics: How is Biden dealing with gun violence 'epidemic' since he took office?
By Hu Yiwei 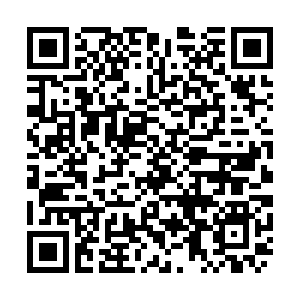 U.S. President Joe Biden renewed his call for the Congress to act on gun control during his first joint address on Wednesday night, the eve of his 100th day in office.

Since taking office, Biden and the country have been facing not just the COVID-19 pandemic. "I need not tell anyone this, but gun violence has become an epidemic in America," Biden said.

At least 160 mass shooting cases have hit the U.S. in 2021, continuing an upward trend, according to data compiled by the Gun Violence Archive (GVA). 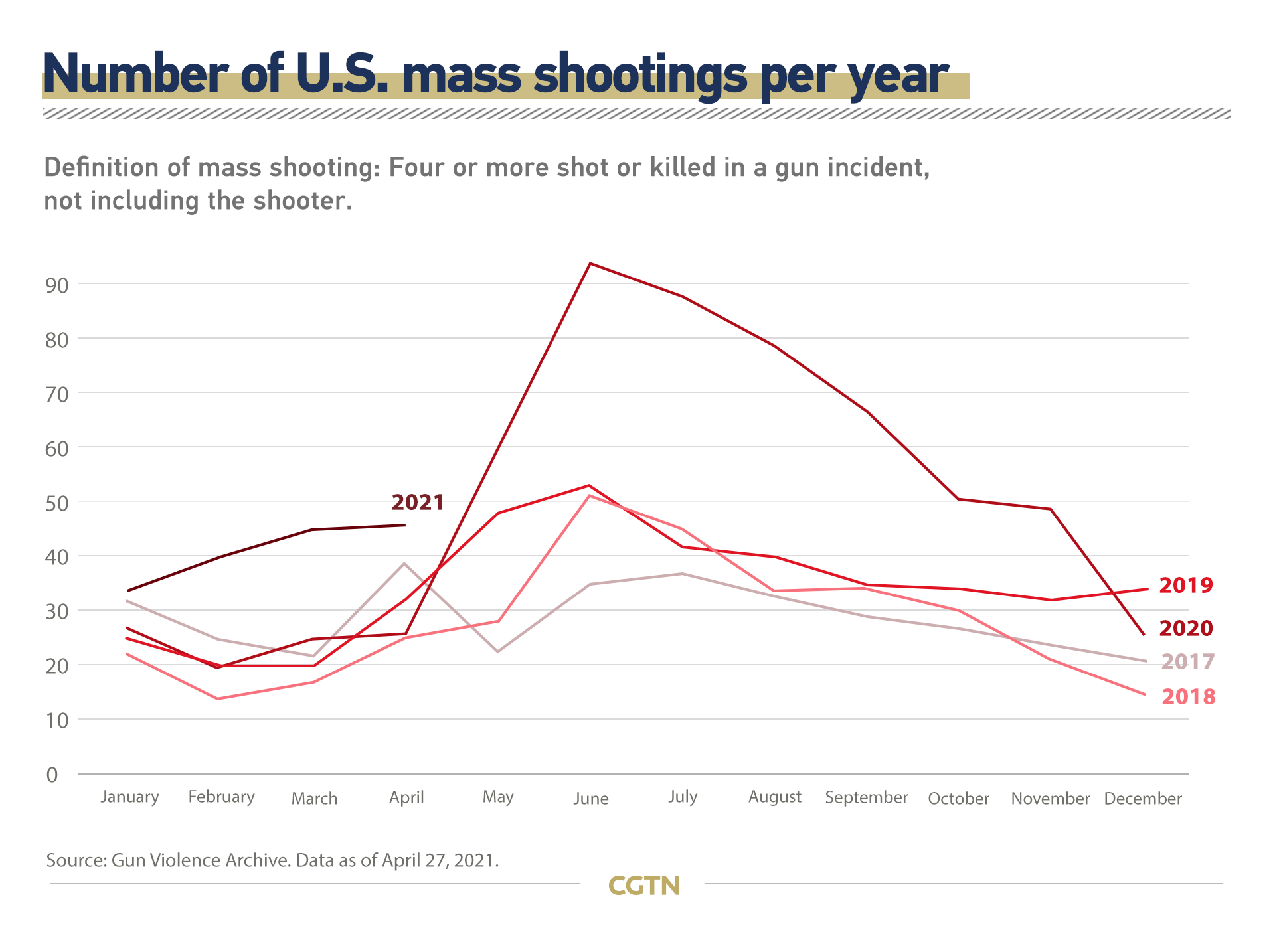 Among the deadliest this year was the killing in Boulder, Colorado, on March 22, when 10 people, including a local police officer, were killed at a King Soopers supermarket.

That incident took place less than a week after eight people, including six Asian women, were killed when a White gunman stormed and opened fire in three Atlanta-area spas. The shooting rampage further heightened fears among Asian Americans already rattled by a rise in racial attacks since the start of the pandemic.

The White House's flag was still at half staff after those fatal shootings, said Biden in his Wednesday speech. 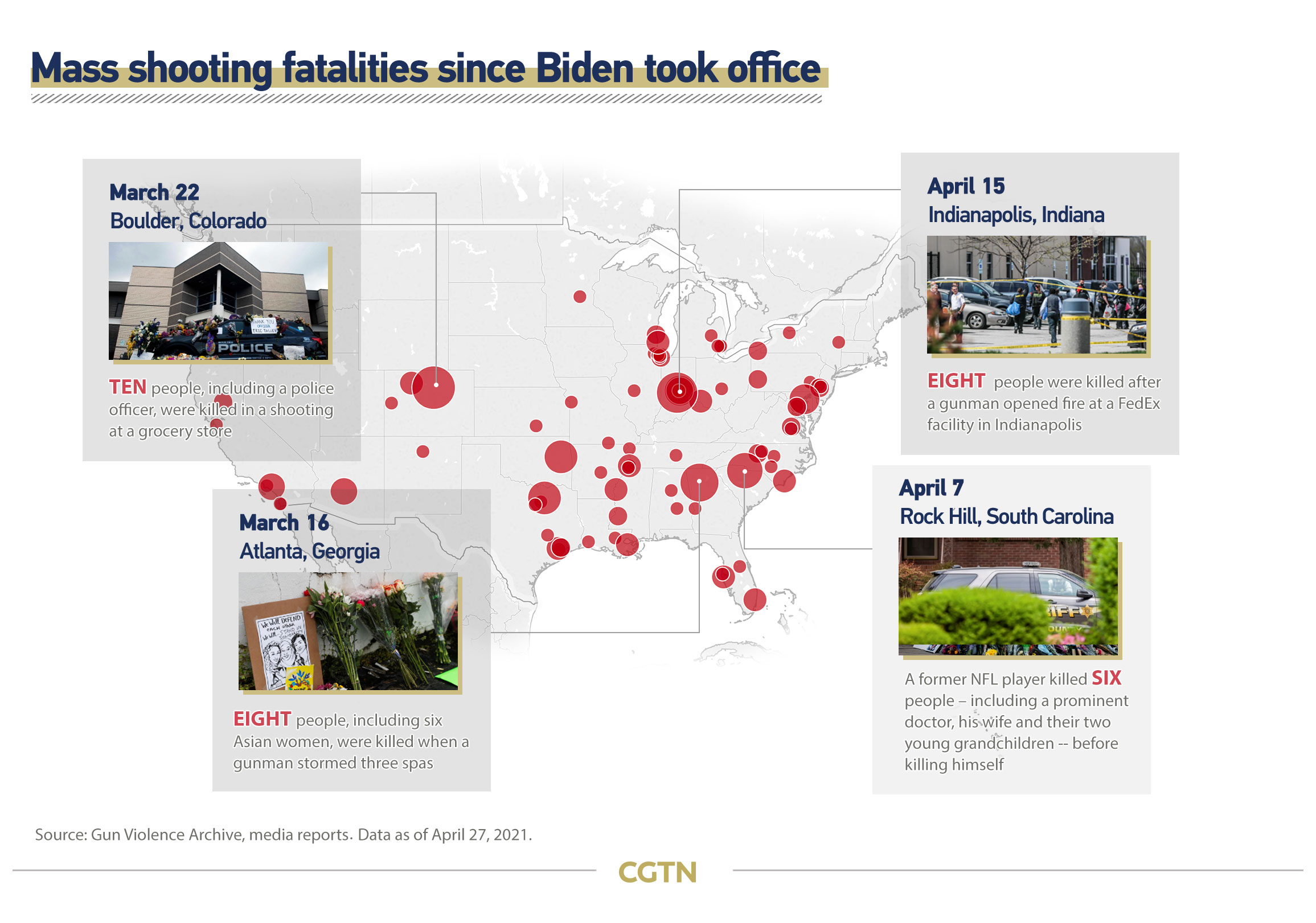 Mass shootings are indeed headline-grabbing cases, yet they only account for less than 0.2 percent of all gun-related deaths in the United States, according to data from GVA.

Nearly 40,000 Americans die each year from gun violence. Already this year, despite the COVID-19 quarantine rules and restrictions, over 13,000 people have died in firearm-related incidents. 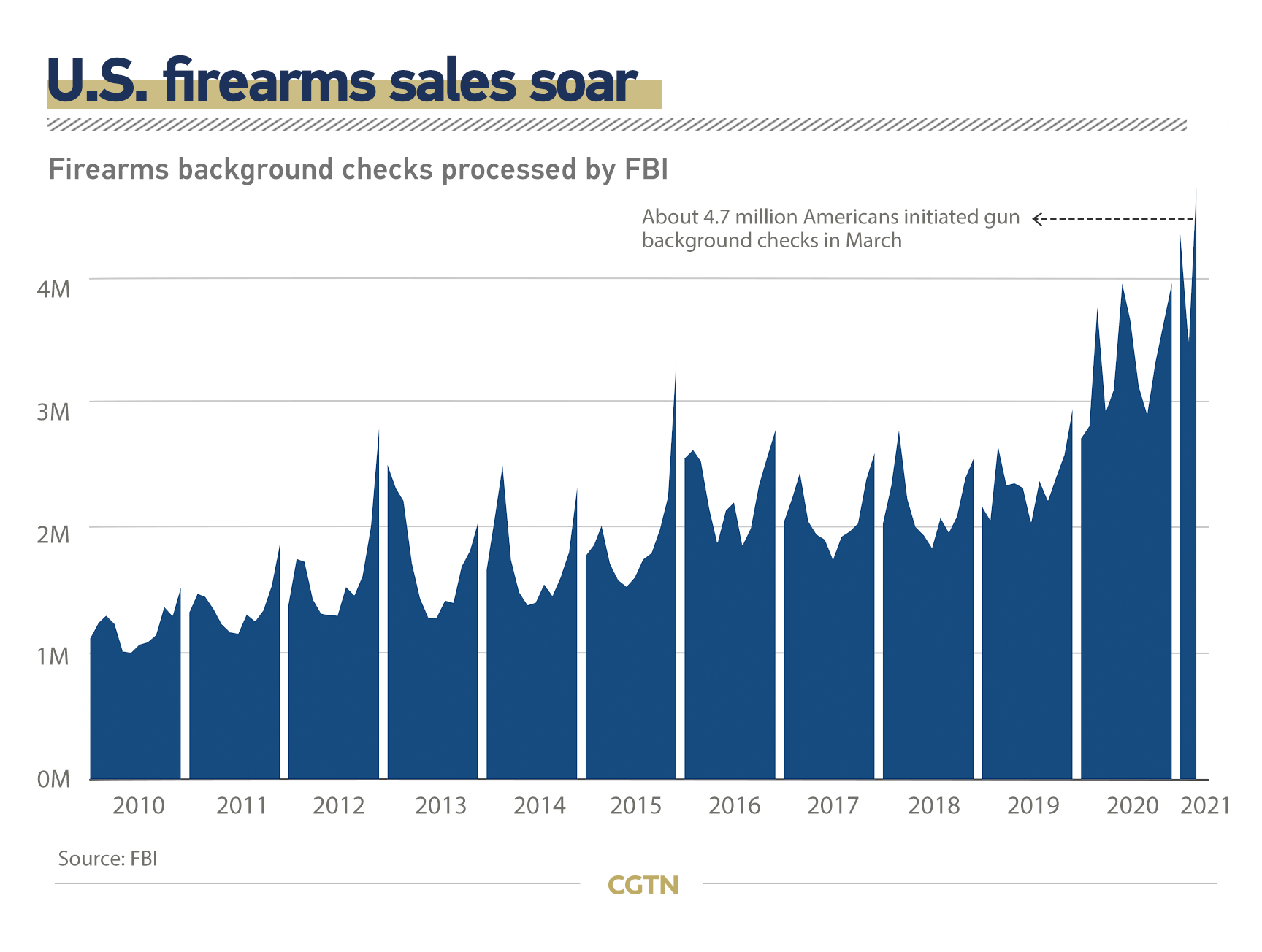 With about 121 firearms in circulation for every 100 residents, the United States is by far the most heavily armed society in the world, according to the Geneva-based research group Small Arms Survey.

Gun rights are one of the most divisive issues in American politics. High-profile mass shootings have increased public pressure to tighten regulations. Though increasingly more Americans support tougher gun laws, Washington has done little to address the problem in recent years.

This month, Biden called the country's gun violence an "international embarrassment" at a White House ceremony to unveil his first attempt at getting the problem under control.

His new steps include a move to crack down on "ghost guns," homemade firearms that usually are assembled from parts and often lack traceable serial numbers. He was also moving to tighten regulations on pistol-stabilizing braces like the one used in Boulder, Colorado.

But his orders stop well short of some of his biggest campaign promises, which included a ban on the manufacturing and sale of assault weapons and high-capacity magazines, background checks for all gun sales, as well as ending the online sale of firearms and ammunition. 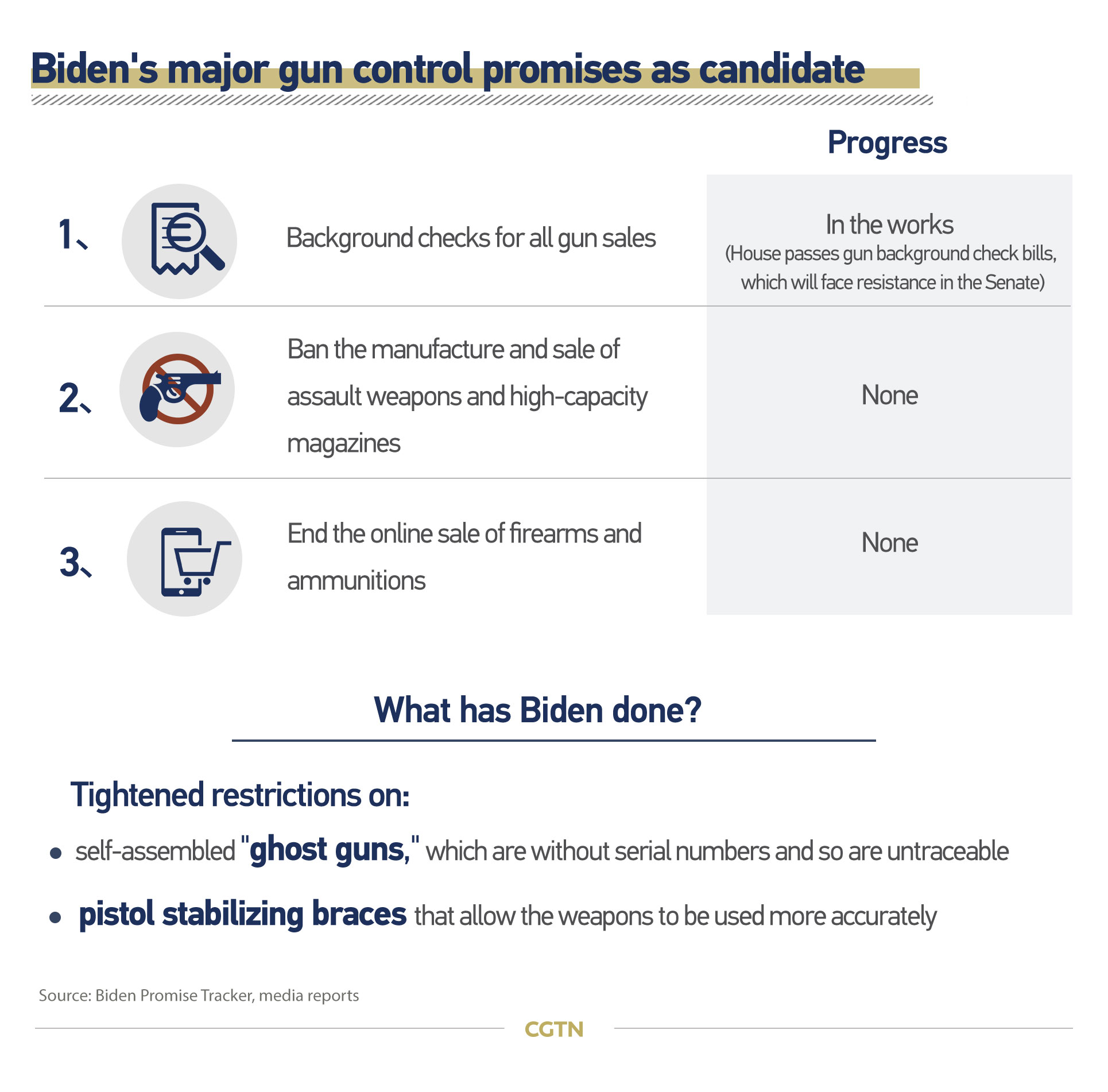 The Democratic-controlled House has passed two bills that would expand and strengthen background checks for gun sales and transfers, a move that has broad public support. But support from at least 10 Republicans will be needed to get a bill through the Senate, and most of the House Republicans are intractably opposed.

"We need more Senate Republicans to join with the overwhelming majority of their Democratic colleagues, and close loopholes and require background checks to purchase a gun," Biden repeated his call at the Wednesday address.

The last time Congress passed significant gun control legislation was almost 30 years ago, when Biden was chairman of the Senate Judiciary Committee.

In 1994, America passed its first assault weapons ban, which expired a decade later and the country hasn't passed significant gun control measures since. The incumbent president knows better than almost anyone just how difficult that would be.