Download
'Enough is enough': Tens of thousands rally against gun violence in capital, across U.S.
CGTN 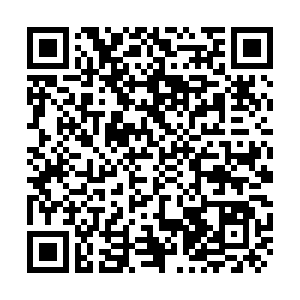 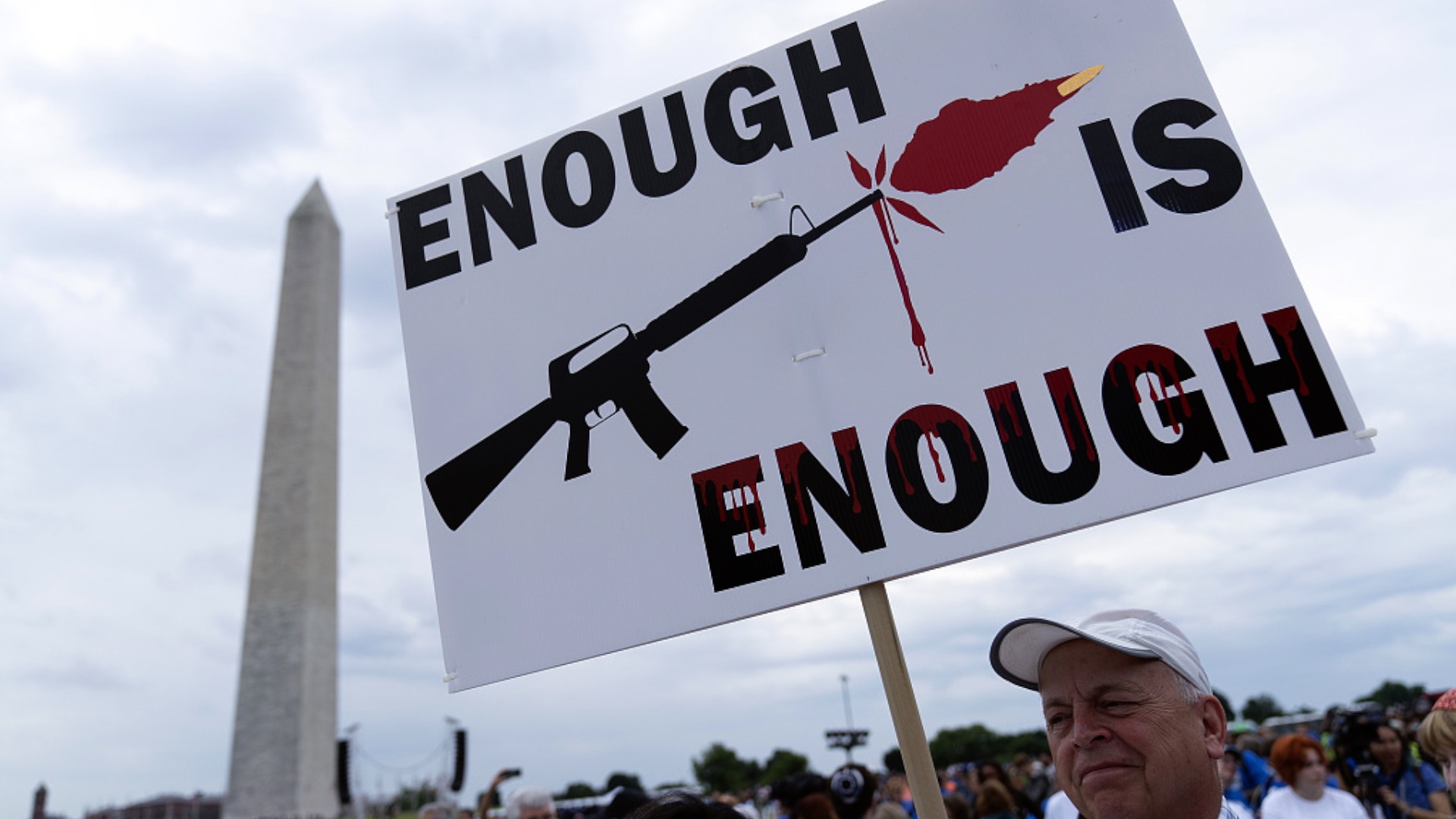 Tens of thousands of demonstrators descended on Washington D.C. and joined hundreds of rallies across the United States on Saturday to demand that lawmakers pass legislation to curb gun violence following last month's massacre at a Texas elementary school.

"Enough is enough," Washington, D.C. Mayor Muriel Bowser told people at the second March for Our Lives (MFOL) rally in her city.

"I speak as a mayor, a mom, and I speak for millions of Americans and America's mayors who are demanding that Congress do its job. And its job is to protect us, to protect our children from gun violence," she said.

Speaker after speaker in the U.S. capital called on senators, who are seen as a major impediment to legislation, to act or face being voted out of office, especially given the shock to the nation's conscience after 19 children and two teachers were killed on May 24 at Robb Elementary School in Uvalde.

"If our government can't do anything to stop 19 kids from being killed and slaughtered in their own school and decapitated, it's time to change who is in government," said David Hogg, a survivor of the 2018 shooting that killed 17 students and staff at Marjory Stoneman Douglas High School in Parkland, Florida.

Yolanda King, the granddaughter of Martin Luther King Jr., who was also present, said, "This time is different because this isn't about politics. It's about morality. Not right and left, but right and wrong, and that doesn't just mean thoughts and prayers. That means courage and action.” 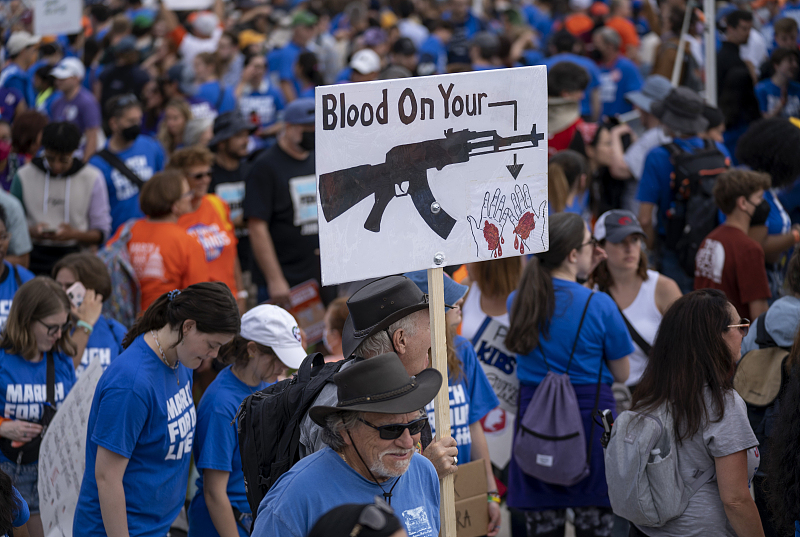 People display placards during the second March for Our Lives (MFOL) rally in support of gun control in Washington, D.C. U.S., June 11, 2022. /CFP

People display placards during the second March for Our Lives (MFOL) rally in support of gun control in Washington, D.C. U.S., June 11, 2022. /CFP

In the nation's capital, organizers with MFOL estimated that 40,000 people assembled at the National Mall near the Washington Monument, saying that more than 450 demonstrations were planned across the U.S. around the world on the day.

The first MFO rally was held in 2018 following that year's massacre at Parkland high school, and the gun safety group was founded by the student survivors of that incident.

The recent deadly mass shootings in Uvalde, Texas and Buffalo, New York that killed 10 Black people have added new urgency to the country's ongoing debate over gun violence. However, the prospects for federal legislation remain uncertain, given staunch Republican opposition to any limits on firearms.

"We are being murdered," said X Gonzalez, a Parkland survivor and co-founder of MFOL, in an emotional speech alongside survivors of other mass shootings. "You, Congress, have done nothing to prevent it."

Among other policies, MFOL has called for an assault weapons ban, universal background checks for those trying to purchase guns and a national licensing system that would register gun owners. 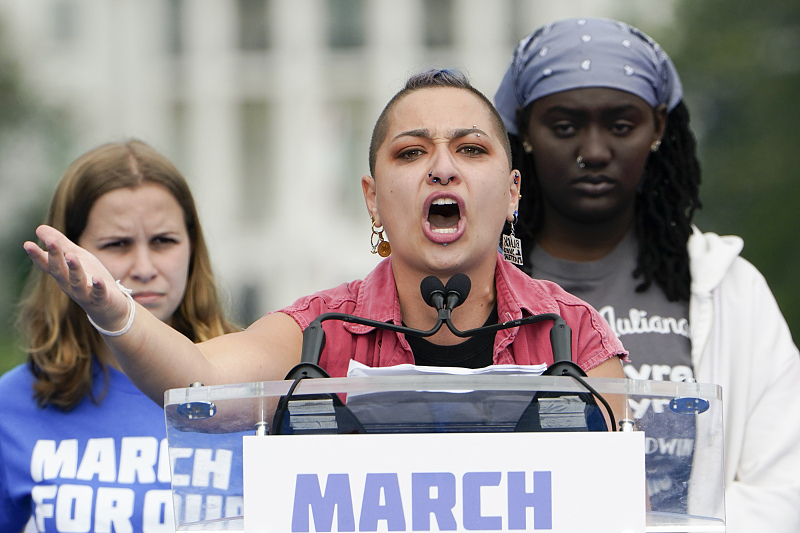 Parkland survivor and activist X Gonzalez speaks to the crowd during in the second MFOL rally in support of gun control in Washington D.C., June 11, 2022. /CFP

Parkland survivor and activist X Gonzalez speaks to the crowd during in the second MFOL rally in support of gun control in Washington D.C., June 11, 2022. /CFP

The U.S. House of Representatives on Wednesday passed a sweeping set of gun safety measures. But the legislation has no chance of advancing in the Senate, where Republicans view gun limits as infringing upon the U.S. Constitution's Second Amendment right to bear arms.

According to a recent Reuters/Ipsos poll, most Americans support tighter gun restrictions. In the poll, 84 percent of respondents said they support background checks for all firearm sales, while 70 percent backed "red flag" laws allowing authorities to confiscate guns from people deemed to be a threat to public safety.

Mass shooting tragedies across the United States over the past few weeks have renewed national attention to gun violence. The news portal Axios reported on Thursday that "firearms" was the second or third most searched topic in 409 of 435 congressional districts in the U.S. during the week when the May 24 mass shooting happened.

There have already been more than 250 mass shootings in the United States this year, with more than 18,900 lives lost to gun violence, according to the latest data from the Gun Violence Archive indicates.