Download
Chart of the Day: What fields do SCO members cooperate in?
By Zhao Hong 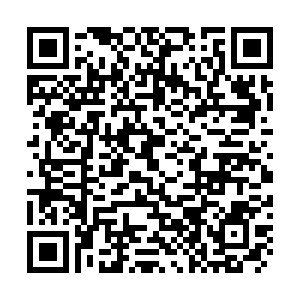 The Shanghai Cooperation Organization's (SCO) Samarkand summit will take place from Thursday to Friday, when the heads of the eight SCO member states will gather to search for collective answers to the most acute regional and global challenges and threats.

Apart from the eight countries that enjoy the status of full SCO membership, four countries – Afghanistan, Belarus, Iran and Mongolia – have observer status with the SCO; and six countries – Azerbaijan, Armenia, Cambodia, Nepal, Türkiye and Sri Lanka – have dialogue partner status. Leaders of the observer states will also attend the summit.

After analyzing the documents released by the organization from 2001 to 2021, CGTN found that cooperation in trade and economy, science and technology, agriculture, culture, tourism, transport, border issues, information security, countering the spread of COVID-19, combating terrorism and drug threat have been the topical issues on the roundtables of the member states.

In recent years, the SCO countries have improved the trade and investment environment and created favorable conditions for the free flow of goods, capital, services and technologies.

The updated Program of Multilateral Trade and Economic Cooperation of the SCO Member States Up to 2035, approved in 2019, was primarily aimed at a further increase in mutual trade and mutual investment, and the acceleration of integrated and balanced economic development.

The global trade value of SCO member states grew from just $667 billion, not including India and Pakistan, in 2001 to a remarkable $6.06 trillion in 2020.

India and Pakistan became full members of the SCO at the Astana summit in 2017, expanding membership from six to eight states.

The Dushanbe Declaration on the 20th Anniversary of the SCO last year underscored the need to expand mutually beneficial energy cooperation, including the widespread use of renewable and alternative energy sources.

It also noted the importance of jointly studying ways of expanding the regional connectivity of SCO member states' power grids. 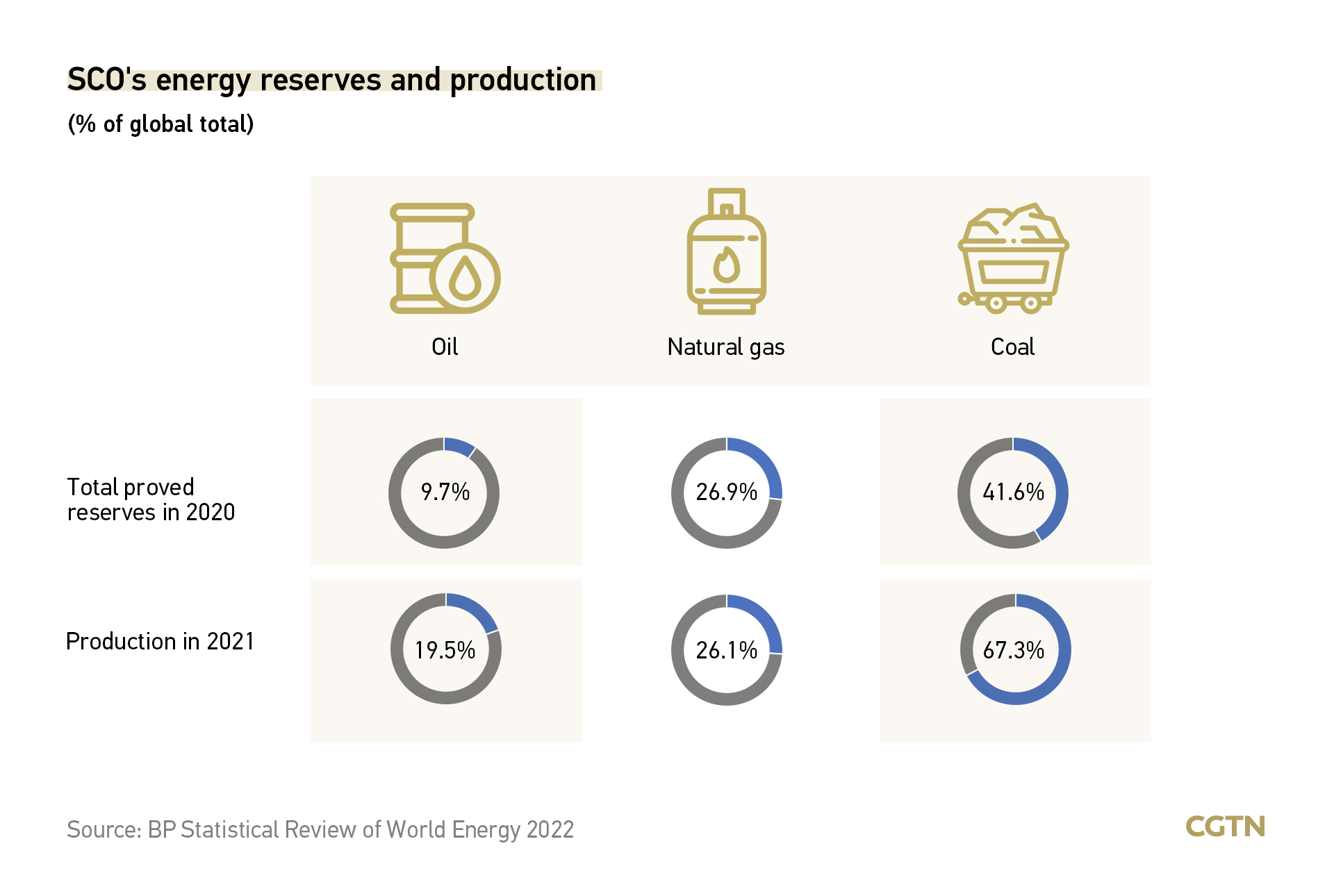 The SCO member states hold one-tenth of the world's oil reserves, a quarter of natural gas reserves and 40 percent of coal reserves.

With a relatively stable food supply, the eight SCO member states issued the joint statement of the Council of Heads of State of the SCO on food security in 2021, which focused on promoting agricultural trade and sharing innovative knowledge. 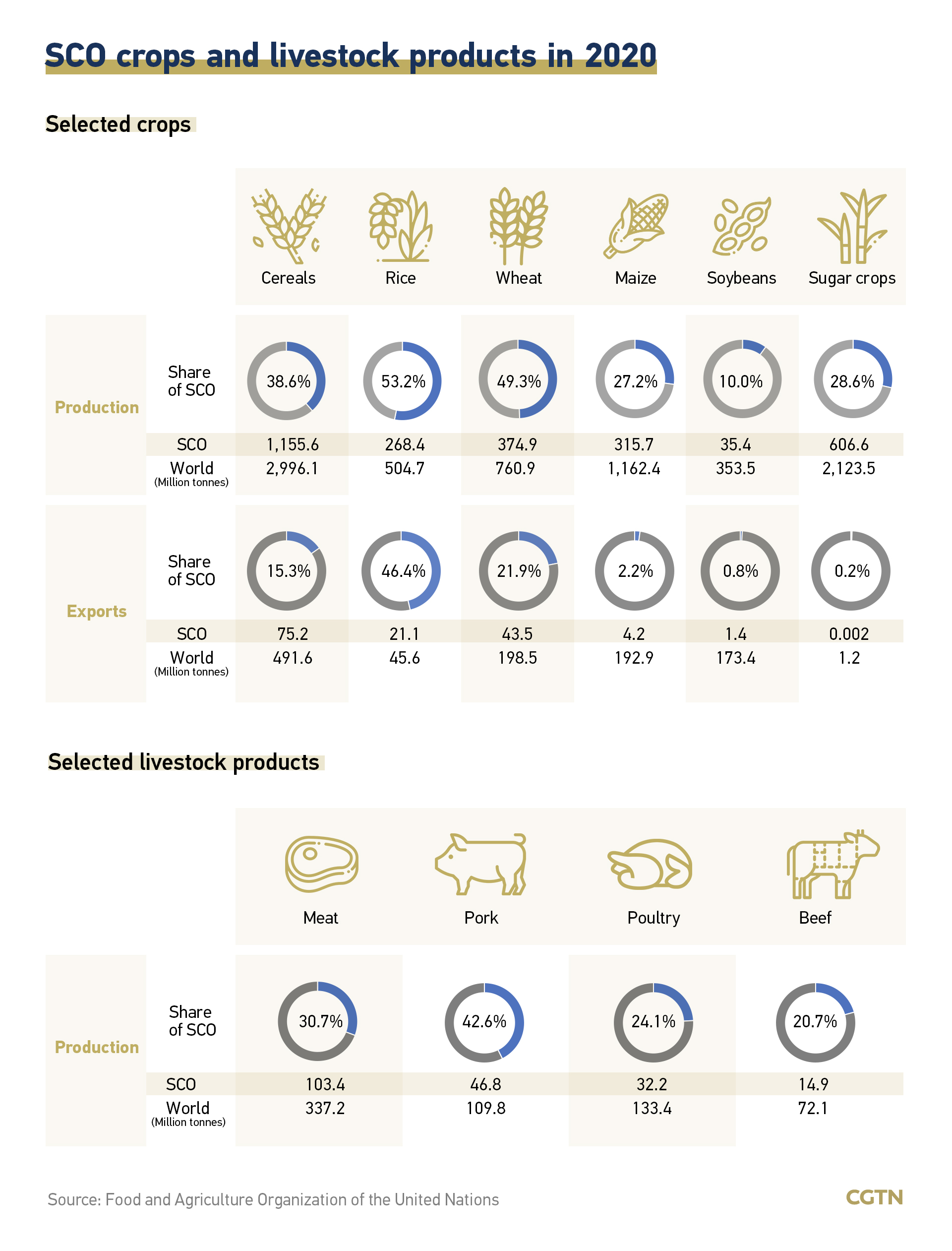 In 2020, the SCO countries accounted for 39 percent of the world's cereals production, and 31 percent of meat production. They also have a considerable share of global food exports, taking up nearly half of world rice exports and 22 percent of wheat exports.