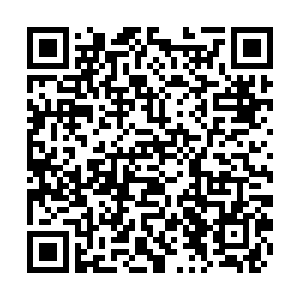 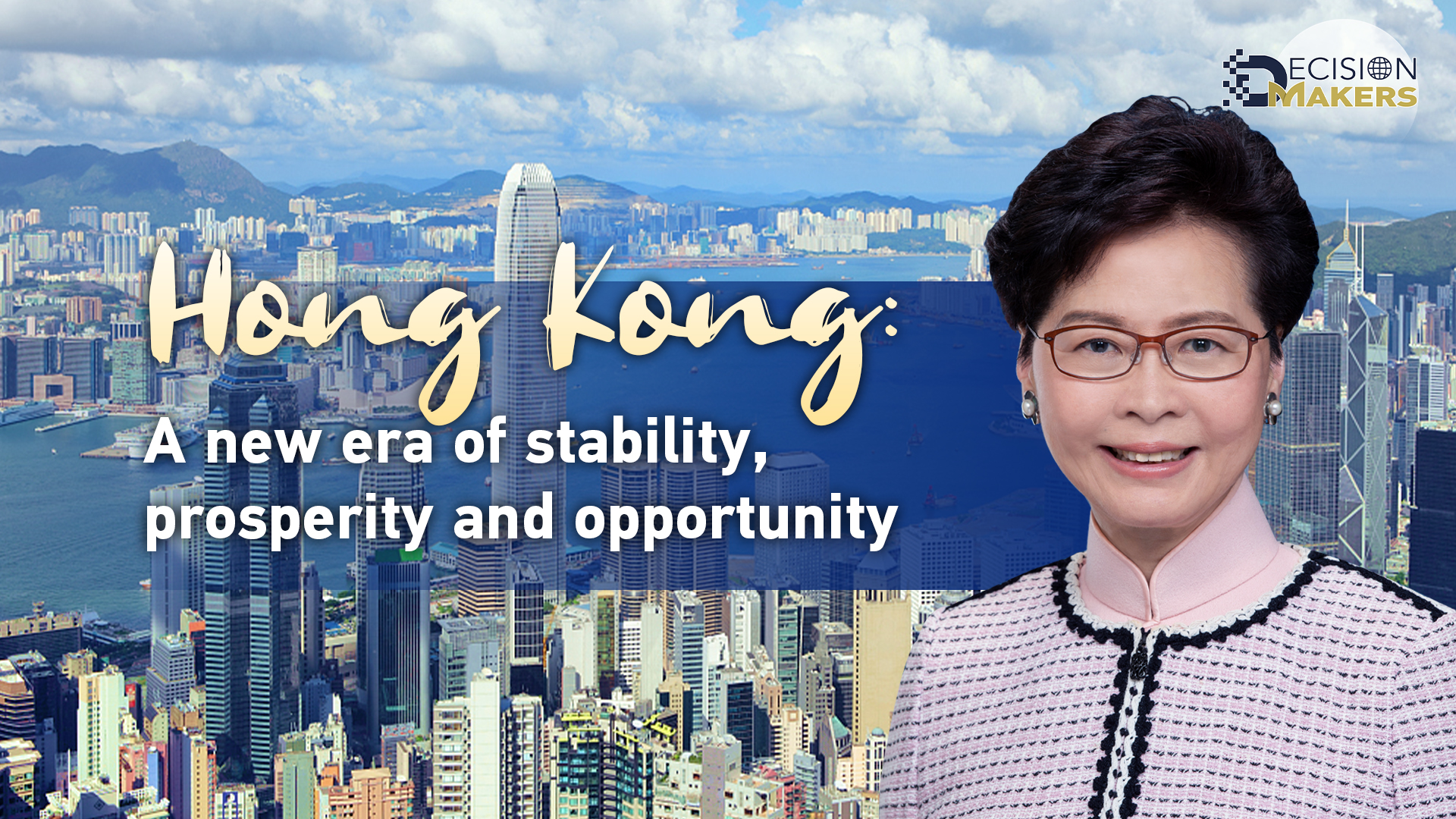 Editor's note: Decision Makers is a global platform for decision makers to share their insights on events shaping today's world. Carrie Lam is the fifth-term (2017-2022) chief executive of the Hong Kong Special Administrative Region of the People's Republic of China. This article reflects her opinions, and does not represent the views of the current HKSAR government and not necessarily those of CGTN.

I wrote on this platform in April 2021 that following a series of decisive actions by the Central Authorities to end a period of unprecedented chaos and political radicalization, Hong Kong would emerge stronger. With the important messages in President Xi Jinping's address at the meeting celebrating the 25th anniversary of Hong Kong's Return to the Motherland and the inauguration ceremony of the sixth-term government of the Hong Kong Special Administrative Region (HKSAR) on July 1, 2022, I am more confident than ever that Hong Kong would usher in a new era of growing prosperity built on solid stability and diverse opportunities. The reason is simple: "One Country, Two Systems" is a good policy meeting the fundamental interests of the country and the people of Hong Kong and that the Central Government will always provide staunch support to the HKSAR.

Since the 18th National Congress of the Communist Party of China (CPC) in 2012, President Xi Jinping has emphasized on many occasions the importance of upholding the "One Country, Two Systems" policy. On the occasion of celebrating the 20th anniversary of Hong Kong's return to the motherland on July 1, 2017, President Xi reiterated that full and faithful implementation of the "One Country, Two Systems" policy lied at the heart of the success of this great initiative; it was imperative for all to have a correct understanding of the relationship between "One Country" and "Two Systems" and to always act in accordance with the Constitution of the People's Republic of China and the Basic Law of the HKSAR.

The underlying objective of "One Country, Two Systems" is to uphold China's sovereignty, security and development interests and maintain the long-term prosperity and stability of Hong Kong. The extended period of unprecedented chaos and damaging social unrest in the latter part of 2019, instigated by anti-China forces inside and outside Hong Kong, had awakened the city to realize that prosperity and stability were a mirage without upholding national security. Likewise, the long-term stability and prosperity of Hong Kong could hardly be achieved unless the HKSAR adhered to the principle of "patriots administering Hong Kong."

Experience in the past five years has proved that by effectively implementing these two principles and thereby strengthening the Central Authorities' overall jurisdiction over the HKSAR, Hong Kong is on the right track of "One Country, Two Systems" and will advance steadily.  Above all, it is gratified to note that upholding the "One Country, Two Systems" policy and promoting national reunification was hailed as one of the great achievements of the CPC in the new era in the Resolution of the CPC Central Committee on the Major Achievements and Historic Experience of the Party over the Past Century passed at the Sixth Plenary of the 19th CPC Central Committee held in November 2021.

At the meeting celebrating the 25th anniversary of Hong Kong's return to the motherland and the inauguration ceremony of the sixth-term government of the HKSAR on July 1, 2022, President Xi highlighted once more that "the policy of 'One Country, Two Systems' having been tested and proved time and again, meets the fundamental interests of the country and the Chinese nation and those of Hong Kong and Macao. It enjoys the full support of the more than 1.4 billion people of the motherland, it has the unanimous endorsement of Hong Kong and Macao residents, and it is widely recognized by the international community. There is no reason to change such a good system, and it must be adhered to over the long run!" 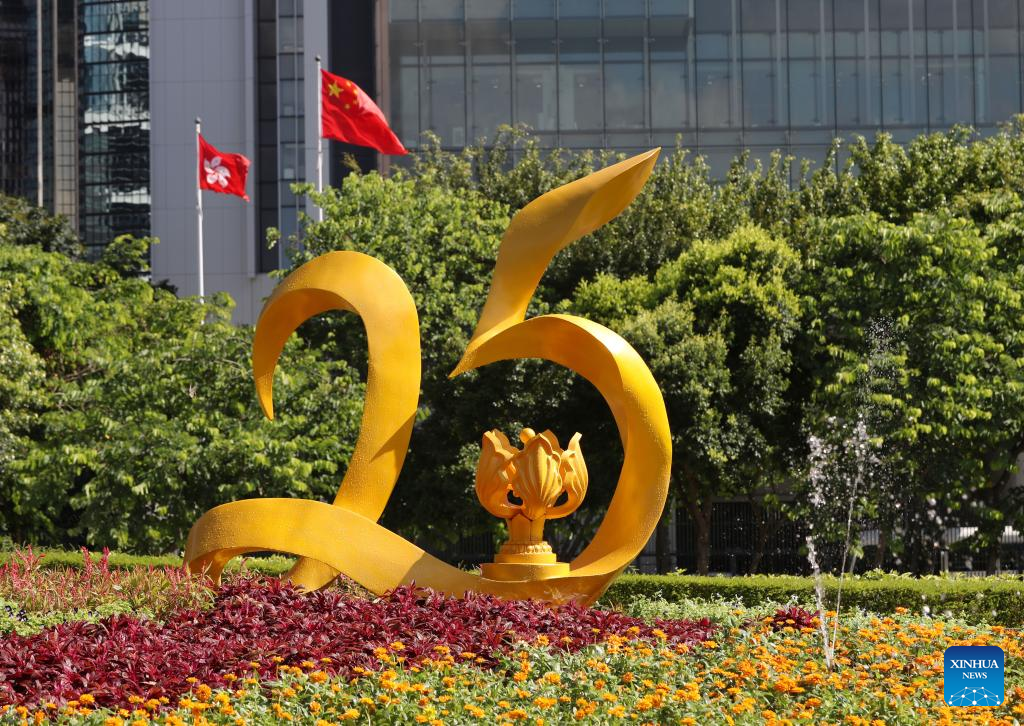 An installation marking the 25th anniversary of Hong Kong's return to the motherland in Hong Kong, South China, June 28, 2022. /Xinhua

An installation marking the 25th anniversary of Hong Kong's return to the motherland in Hong Kong, South China, June 28, 2022. /Xinhua

With such a reassuring and confidence-boosting message, all residents in the HKSAR should spare no effort in leveraging the great advantages of the Two Systems and bring Hong Kong to its new height. These unique advantages include the strong backing of the motherland, the well established connectivity with the world, a free and open trading regime, a sound business environment and its common law system as well as ample management and professional expertise. Abundant opportunities for development could be found not only in the city's traditional economic pillars of finance, trade, transportation, but also in fast emerging sectors of innovation and technology, legal and arbitration services, as well as arts and culture.

The HKSAR government's substantial investment in technology and culture has begun to bear fruit: the West Kowloon Cultural District is taking shape with the opening of two world-class museums, the M+ and the Hong Kong Palace Museum, in the last 12 months; the Hong Kong Science Park and Cyberport have nurtured several thousands of start-ups including some highly successful unicorns; Hong Kong and Shenzhen are jointly developing a second Science Park near the border area, etc. Two major blueprints – the Lantau Tomorrow and the Northern Metropolis will guide Hong Kong's spatial development to support economic growth and provide more housing for the people in the coming decades.

As the CPC is about to hold its 20th National Congress which will launch a new journey to realize the Second Centenary Goal of turning China into a great modern socialist country, and to advance towards the great goal of national rejuvenation, Hong Kong under the firm and clear guidance of "One Country, Two Systems" shall integrate into the overall development of the country, and share the glory of a strong and prosperous motherland.