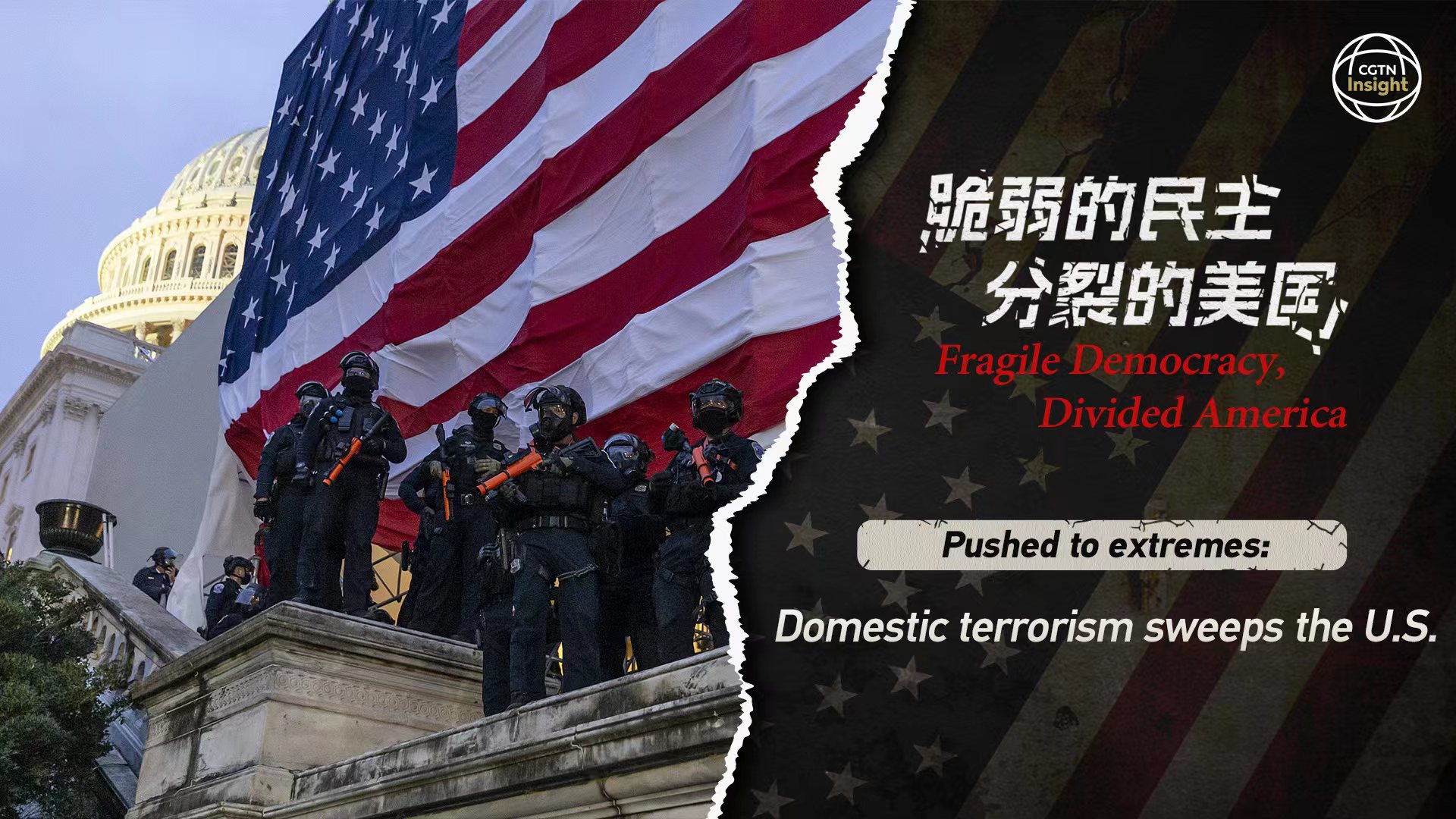 Editor's note: The United States has for long championed the cause of democracy; however, the ground reality reveals an ugly undemocratic side that is widely prevalent across the U.S. CGTN's five-episode documentary series "Fragile Democracy, Divided America" showcases the deep political, social, economic, and cultural divisions in a country that is arguably the world's oldest democracy. The series illustrates the contradictions of the U.S.'s self-proclaimed mission of promoting the "American model of democracy" globally with how an exalted political idea has been subverted in practice and backfired at home. The second episode focuses on the rising threat of domestic terrorism in the U.S.

As summer vacation approached, 21 lives were abruptly cut short by a gunman. Those who lost their lives included 19 students and two educators.

It seems like the U.S. is becoming an increasingly dangerous nation.

Erica Lafferty, daughter of victim of the 2012 Sandy Hook shooting, said: "It's really hard and it's never gonna go away. Every time it happens and it will happen again. It brings all back up."

One of the biggest threats to the U.S. today is the rise of homegrown terrorism, especially emerging from far-right extremism.

The Capitol attack of 2021 makes this more pronounced.

The U.S. Vice President Kamala Harris has also labeled that it (domestic terrorism) is very dangerous and harmful, and it makes the country weaker.

According to the data from Center for Strategic and International Studies (CSIS), domestic terrorism incidents have soared in the U.S., mostly driven by White-supremacists, anti-Muslim and anti-government extremists on the far right.

Between 2014 and 2021, the average number of fatalities per year was 31, demonstrating the increasing lethality of terrorism.

This is substantially more than the period from 1994 to 2013, when there were only three years in which more than eight individuals were killed in terrorist attacks in the United States.

William Jones, the former White House correspondent for Executive Intelligence Review, said: "If you look at the situation that has developed over the last decades, you see a deterioration of human rights: all the violence, racial tensions, the anti-immigration mood in the official departments and among population in the United States."

The rise of far-right extremism stems from a strong sense of frustration and an identity crisis among the White people. And as their financial situation worsens, they feel more marginalized in the society.

One of the prevailing conspiracy theories among far-right conservatives is about a "Great Replacement." It believes that the White race is being replaced by people of color.

The suspect of the Buffalo shooting, an 18-year-old young man, was a loyal supporter of this theory. The overwhelming majority of his victims were Black.

William Jones said: "The same thing is true with regard to democracy, and you've seen the dissension and the discontent that has existed in the United States over the last one to two years, showing that people really are not happy with the situation, with the system as it exists today."

The U.S. domestic extremism is a result of drastic economic and structural changes. It is also linked with the U.S. government's endless "war on terror."

After the 9/11 attack, Washington invested enormous efforts and resources in anti-terrorism wars overseas. This took a heavy toll on the domestic economy.

Starting from 2001, the U.S. ratcheted up its military spending.

The Department of Homeland Security budget, which was $16 billion for the year 2001-2002, peaked at $74 billion for the year 2009-2010. According to the International Institute for Strategic Studies, America's military spending in 2020, standing at $738 billion, nearly tenfold increase in a decade, and accounted for 40 percent of the global total.

This money could have been spent on domestic infrastructure and improving living standards, but that never happened.

In the meantime, America's overseas war on terrorism has deepened the bias of White Americans against the Muslim population.

Daryl Guppy, national board member of the Australia-China Business Council, said: "Suddenly the overseas involvement of the United States involves a type of propaganda campaign against those people who are not seen as American. So this obviously transfers into the American society as well, so we see increased agitation and racism against people who are considered not to be Americans who are living in America at the moment."

Who is quietly pushing the war and eventually cultivated the far-right forces? These numbers may give the answer.

12 American firms were on the list of the top 25 global defense companies, representing 61 percent of global arms sales. Among the $2.3 trillion spent in the war in Afghanistan, around 87 percent went into the pockets of the top five defense contractors.

Even in wars in which the U.S. is not directly involved, the biggest gainers are likely to be the U.S. Military-Industrial Complex. The steady flow of U.S. military aid to Ukraine is a case in point.

The Biden administration has provided more than $17.5 billion as military assistance for Ukraine. It definitely provides the Military-Industrial Complex further access to medium and long-term revenue streams.

Gregory Hayes, the chairman and chief executive officer of Raytheon Technologies Corporation, said: "I make no apology for that. The fact is we will see some benefit in the business over time. Everything that's being shipped into Ukraine today of course is coming out of stockpiles either at the DOD or from our NATO allies."

With the help of senators and representatives they have funded, they obtained more resources to manufacture weapons.

Daryl Guppy said: "What we see in America is to militarize action of the police force. Now the defense industries are highly involved in supplying arms, supplying equipment. So the American Military-Industrial Complex does benefit from increased fears of terrorism domestically within the United States because this presents another market for them to be able to sell into."

The U.S. is turning itself into an imperialist military machine.

It creates a hot bed for domestic far-right terrorism while sowing the seeds for social division and turmoil.

But American citizens don't want trauma to become a way of life.