Alternative to Gaokao: Behind the tide of studying abroad
Pan Jingyi 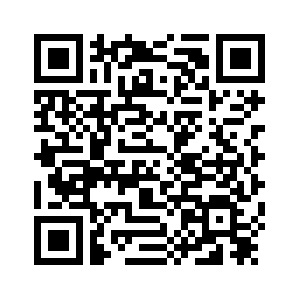 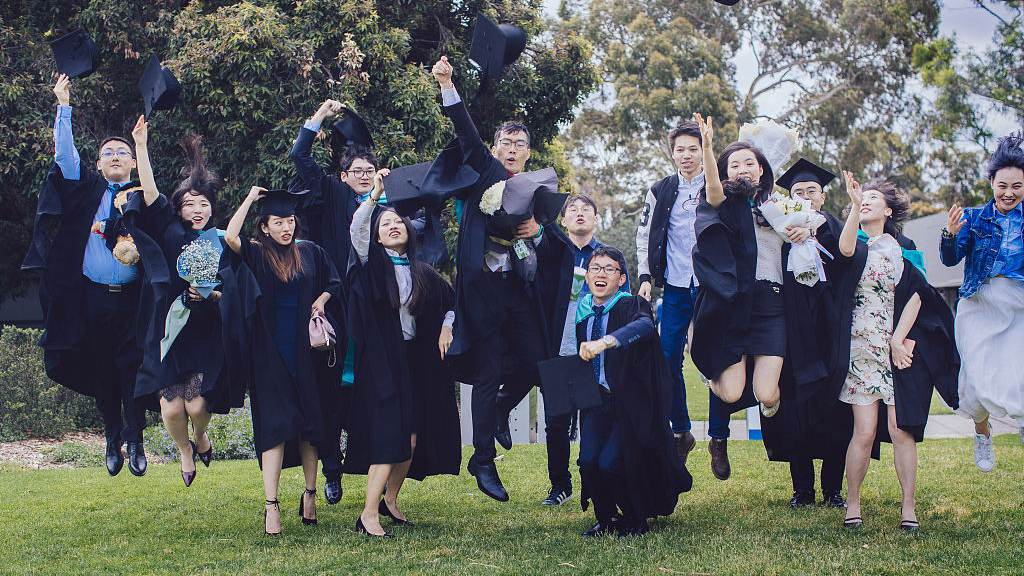 Monnie Yang never thought she would receive her undergraduate education at the University of San Francisco. Yang, who works in Beijing now, told CGTN, "It was an accident because I didn't get a satisfactory result in Gaokao."
Every year in early June, millions of students in China take a vital and competitive exam called the Gaokao, the annual national college entrance examination.
It is widely considered the most important exam for Chinese students, which can make or break their futures. According to China's Ministry of Education, about 10 million students this year participated in the exam, reaching a record high. 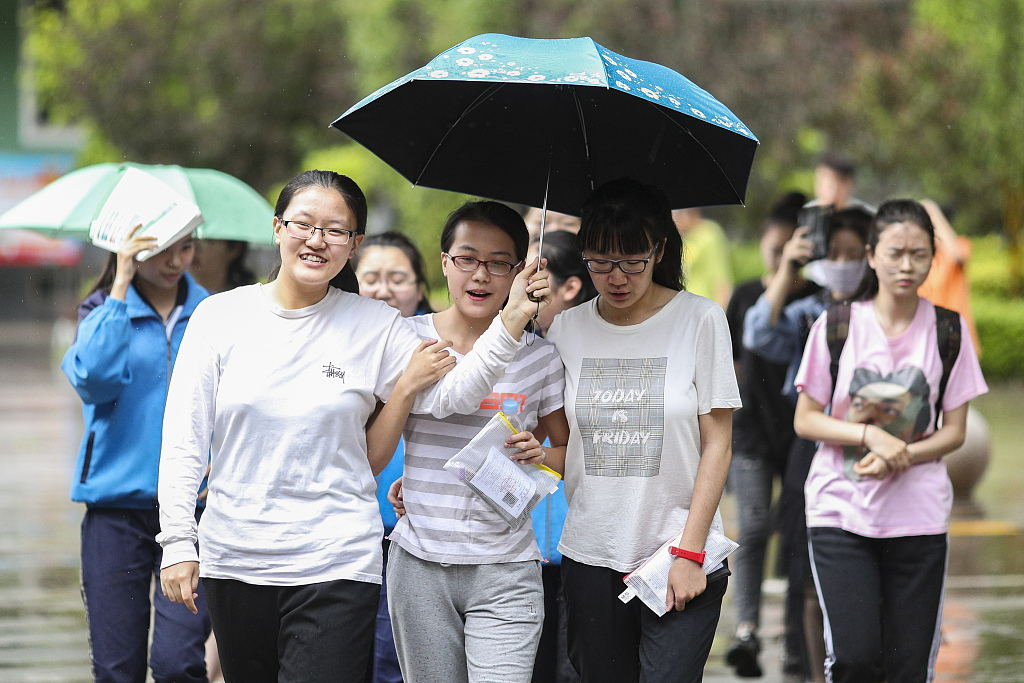 However, compared with their parents, students nowadays have more choices other than taking the Gaokao. Official statistics show that the number of Chinese outbound students has kept increasing in the past 10 years. Besides postgraduate education, studying abroad at a younger age has become more common.
"Other than undergraduate education, more students choose to go to countries like the U.S., UK and Australia for high school education," Yin Jiang, director of the overseas testing department at New Oriental Education Corporation, told CGTN.

Reasons behind the increase

"Parents of those who are at a proper age to go to universities were mainly born between 1975-1977," Yin explained. "Most of them has a bachelor degree and are more open-minded compared with the last generation."
He added that the overseas experience of other family members can also make parents and their children more confident. "One of my relatives is studying abroad, so I also want to have a try," said Deng Yiyi, a 17-year-old girl who will go to the University of Minnesota Twin Cities this autumn.
Family income also plays an important role. Yin said there are more and more middle-class families thanks to the reform and opening-up, which makes it easier to support overseas studies. Xu Chenshu, now a rising sophomore in a U.S. college, told CGTN that the cost of studying abroad including tuition fees, living expenses and flight tickets are really high. "I am so grateful to my parents." 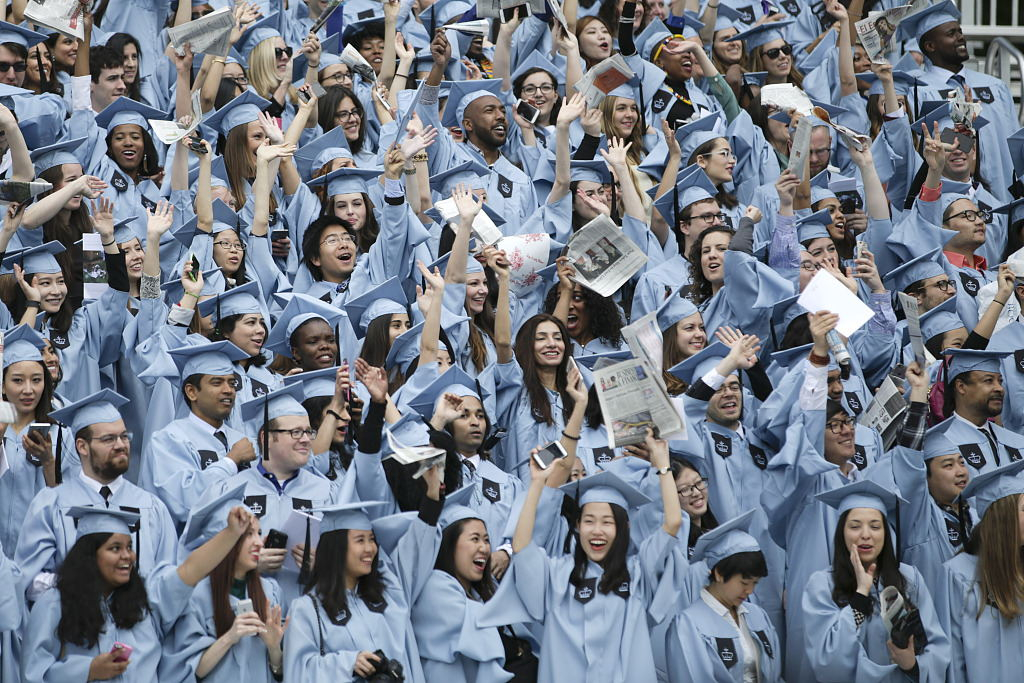 When talking about his choice of studying abroad, Xu said he yearns for the all-round education in the U.S. universities and he is really interested in Western cultures, such as stand-up comedy.
In addition, Yin said the development of the international education industry in China provides sufficient information for parents and students, and the number of top universities in China is limited, which means Gaokao is really competitive.

Traditionally, people hold the view that "studying abroad" is an easier choice compared with Gaokao, but the fact is more complicated.
"Everyone wants to be enrolled in the top universities in China, which contributes to the fierce competition," Guo Xiaolin, an English teacher from an international program in southwest China's Guizhou Province, told CGTN. She added that Gaokao only takes two or three days but will have great influence on one's future. She agrees the competition for applying overseas universities is fierce but relatively better than Gaokao. 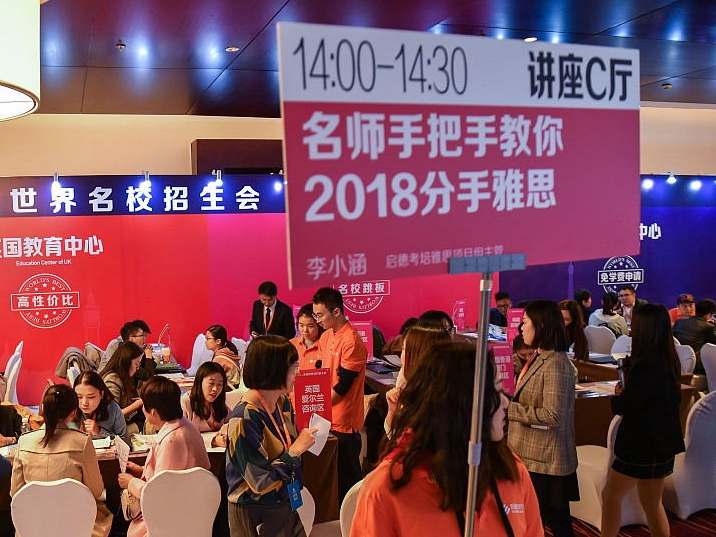 Parents talk with consultants at a promotional event held by an overseas study agency in Beijing, October 13, 2018. /VCG Photo

Parents talk with consultants at a promotional event held by an overseas study agency in Beijing, October 13, 2018. /VCG Photo

Yin argued that the intensity of study between the two choices is almost equal. For instance, if they want to apply to U.S. universities, they need to prepare for a language test like TOEFL, the U.S. counterpart to Gaokao such as the SAT and extracurricular activities.
The preparation is quite stressful, and he had to give up many hobbies to prepare for all kinds of exams and participate in various activities, said Xu. "Is it only once?" he recalled his surprise when he took the TOEFL listening test for the first time. "I cannot fall asleep until 3 a.m. before the exam."

Pros and cons of studying abroad

When asked about differences of the undergraduate education between domestic and overseas universities, Yin said one of them is the student assessment method. The final exam is the most important part in most domestic universities while overseas universities will consider not only final exams but also daily assignments, experiments scores and class presentations.
He also mentioned that overseas universities are more "market-oriented" with practical courses. And the background of teachers and students are highly internationalized.
Yang described her university life has broadened her horizon by embracing a totally different culture. She said the courses are diverse in her university, and small classes give everyone a chance to express their ideas.
However, there are also difficulties in studying abroad. 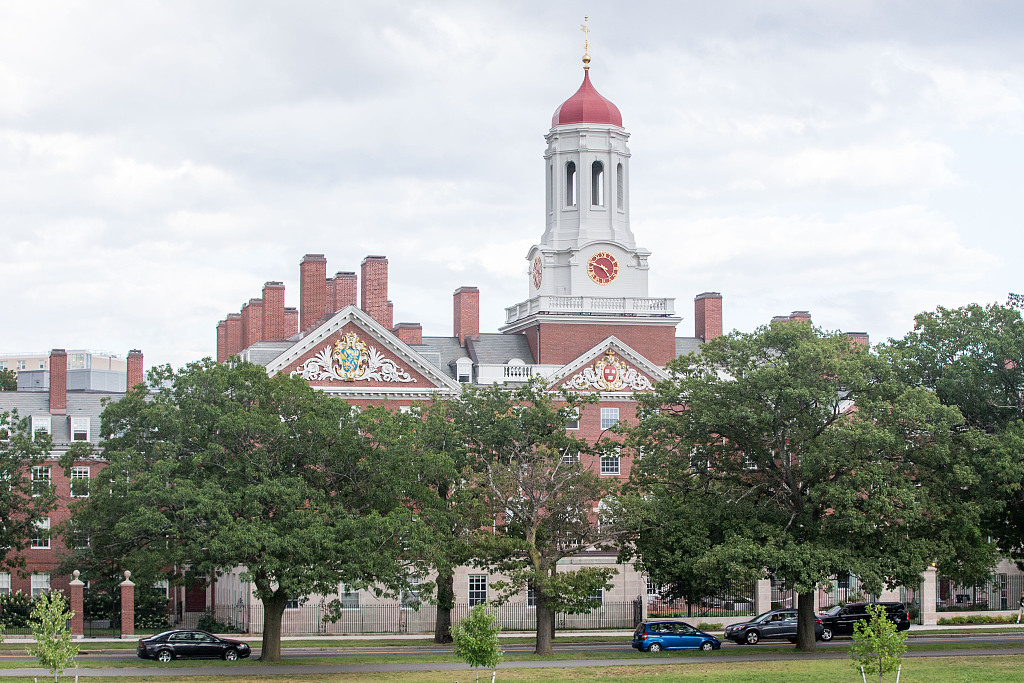 "There are a lot of school associations but because of difficulties in communication, you may not get out of your comfort zone to do what you really like," Yang said, adding that even in class, you may not have a deep discussion with your teacher and classmates because of the language problem. "Actually, my ideal university life is that several good friends living in the same dormitory and having class together."
"It is easier to make friends in domestic universities," Xu said. He said he feels lonely because there are few Chinese students in his school and he really misses Chinese cuisine.

Will they come back? 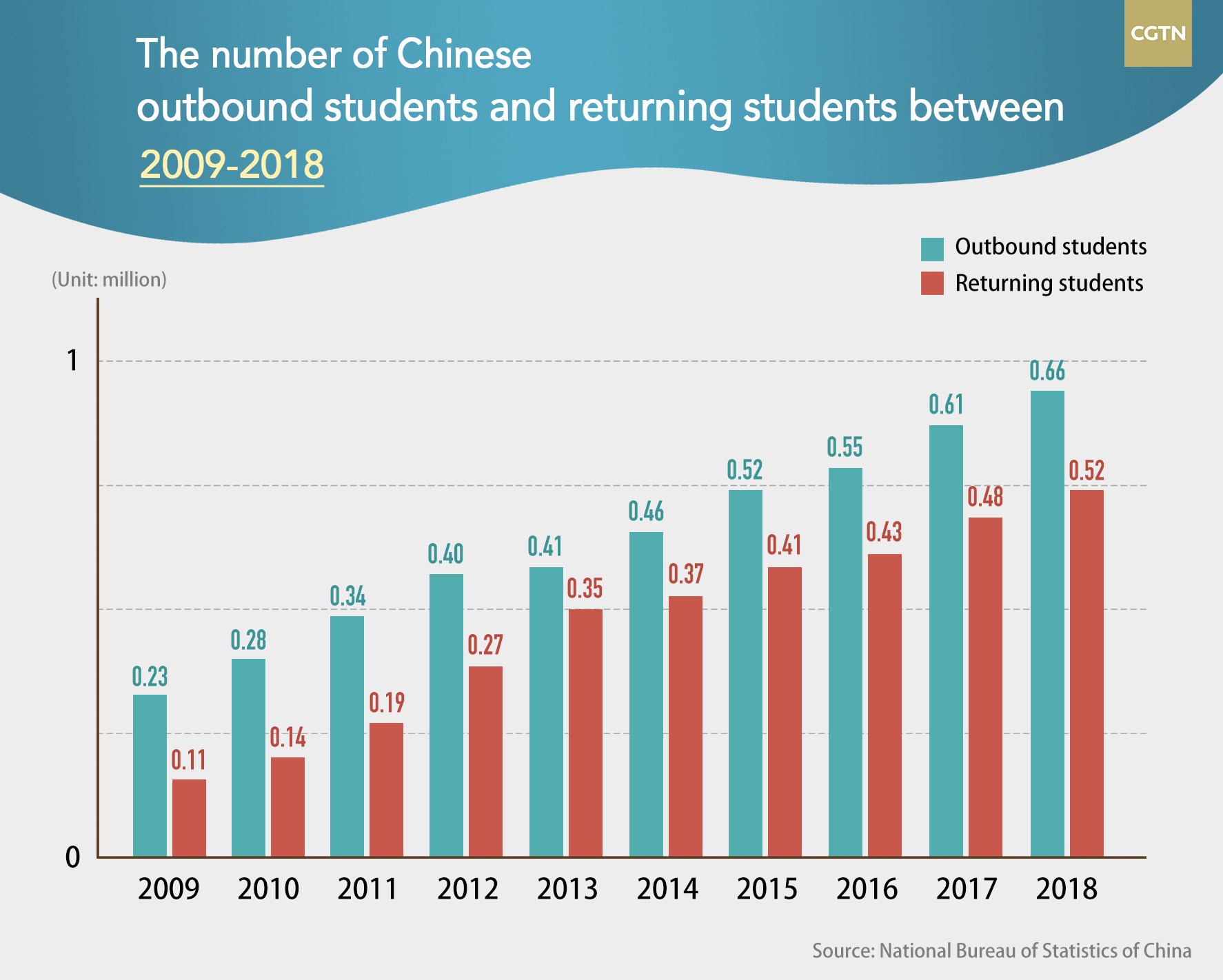 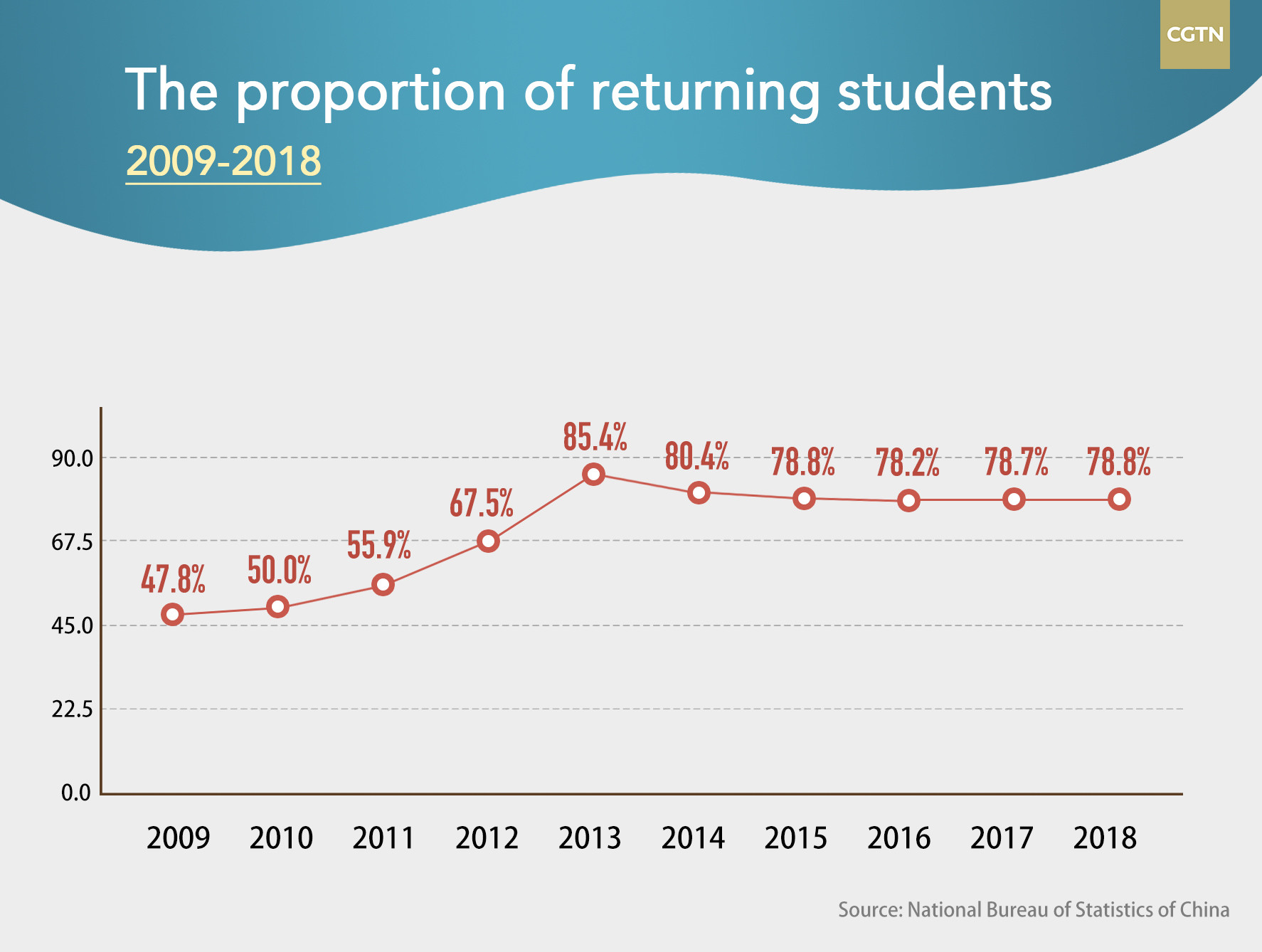 Yin observed that a great number of entrepreneurial opportunities and some talent programs in China are attractive. What's more, the gap between China and other developed countries is narrowing.
As a U.S. college student, Xu is not sure whether he will come back after graduation because it is too early for him to decide. But Deng, who hasn't been to U.S. yet, expressed her wish to come back because of the sense of belonging.
"I came back because my family and friends are here," Yang said. "If I have one more chance, I would like to go abroad for a master's degree other than a bachelor one."
(Top image: Chinese students take graduation photos at Monash University in Australia, December 13, 2018. /VCG Photo)