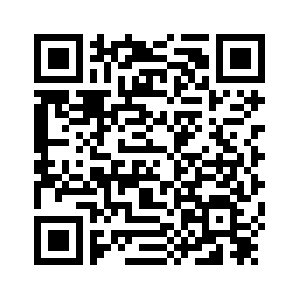 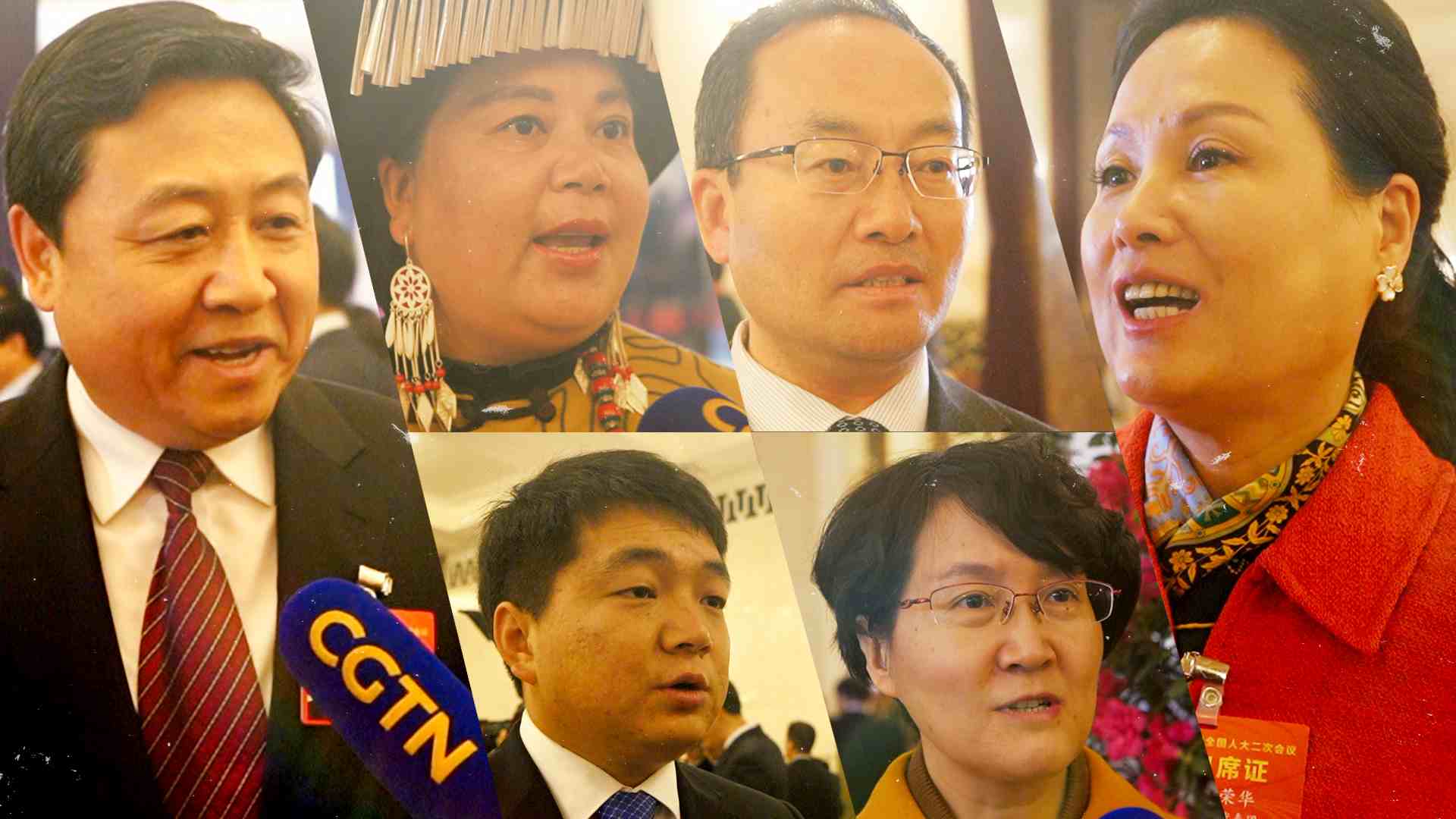 The latest report on the work of the Chinese government given by Premier Li Keqiang during the ongoing Two Sessions has  addressed issues concerning deputies of the Chinese National People's Congress (NPC).
At the opening ceremony of the second session of the 13th NPC on Tuesday, Premier Li wrapped up the government's work in the past year and mapped out its blueprint for 2019, largely answering to the expectations held by the NPC deputies that CGTN spoke with earlier.

The economy has been the top priority for many NPC deputies when it comes to their suggestions and motions.
Cai Ling from east China's Shandong Province suggested the central government further cut taxes and reduce miscellaneous fees to uphold the development of the real economy. 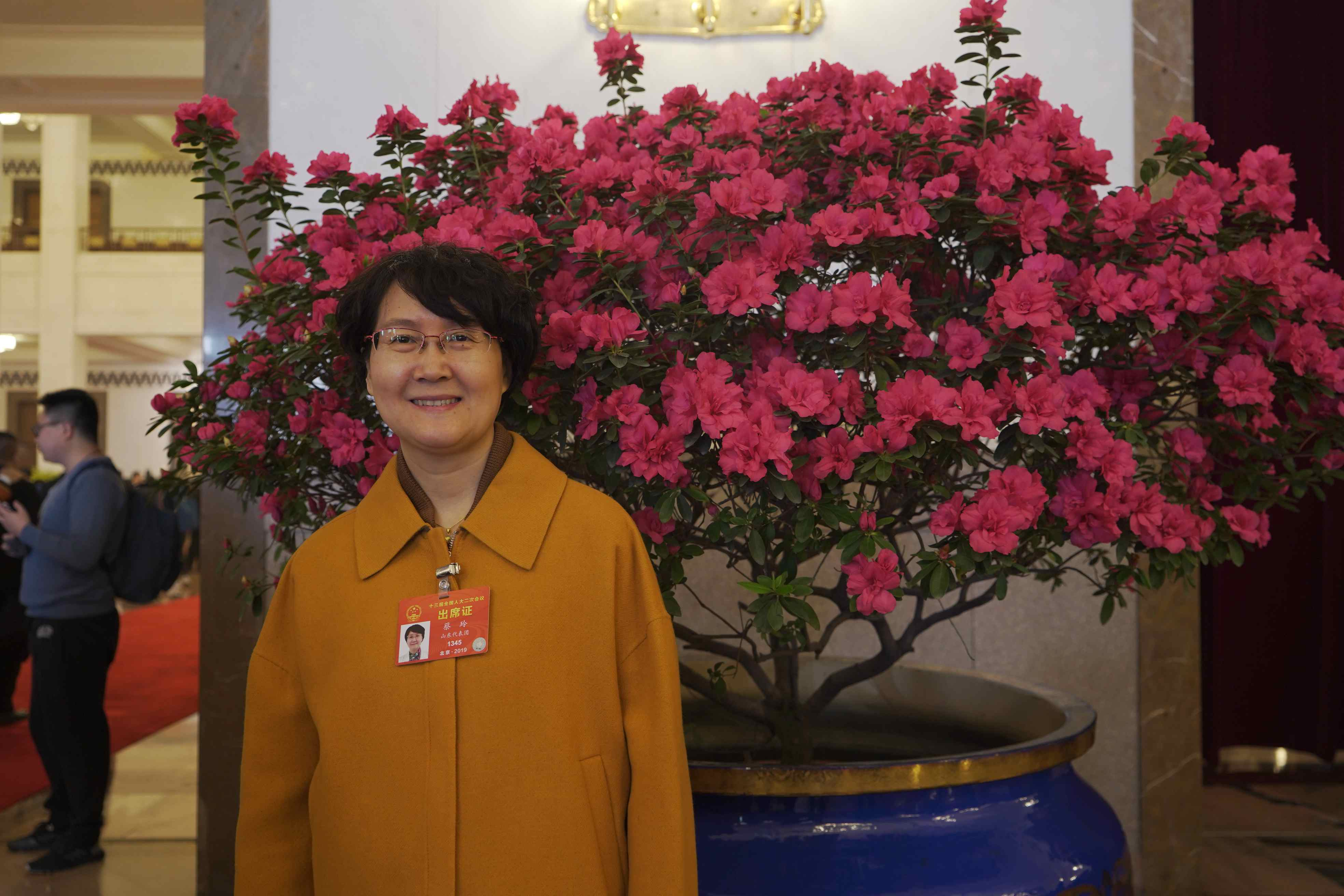 Zhang Tianpei from central China's Anhui Province said he looked forward to plans for quality development of the manufacturing industry.
"The manufacturing industry is the backbone of the real economy," Zhang emphasized.
Tax cuts turned out to be one of the highlights of Premier Li's report.
Read more:
Highlights of 2019 government work report
Li announced a significant three percentage point cut in the value-added tax rate in manufacturing and other industries, to 13 percent.
The report also pointed out that China will strengthen the foundations of industry and the capacity for technological innovation to promote the development of high-quality manufacturing. 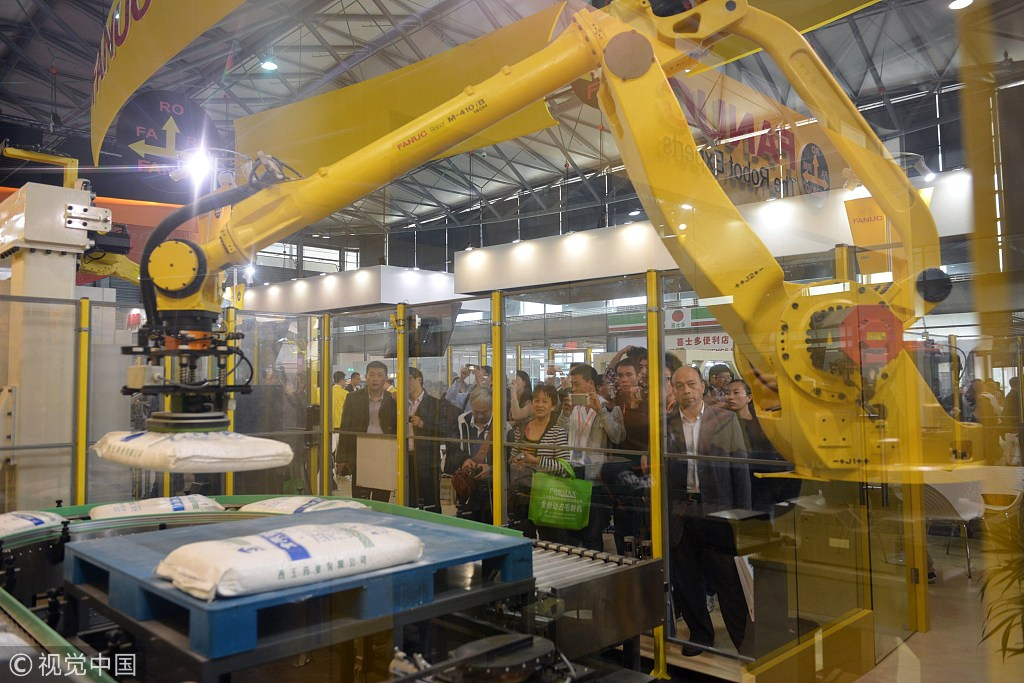 More innovative efforts will be made to transform and upgrade the manufacturing industry, according to the report.
Zheng Yi, NPC deputy from southwest China's Yunnan province, voiced his appeal for more support for the private sector of the economy.
"We'd like the central government to make more specific plans to reinforce the private sector of the economy, taking measures like earmarking a certain percentage of new loans to this sector."
During a joint panel discussion with political advisers attending the second session of the 13th National Committee of the Chinese People's Political Consultative Conference (CPPCC), Premier Li reaffirmed the significance of private enterprises.
There are more than 90 million private enterprises and individual businesses in China, which are important forces in promoting development and increasing employment, Li noted.
Read more:
Premier Li urges efforts to help private enterprises In the government work report delivered on Tuesday, the Chinese premier also touched upon the issue of financing for private enterprises, saying more targeted cuts will be made to required reserve ratios for medium and small banks, and the additional funds thus released will be lent to private enterprises and small and micro businesses.

Some NPC deputies interviewed by CGTN, particularly the ones from China's border areas, have set their eyes on the building of infrastructure facilities in their home provinces.
Hu Aluo, a member of the Yi ethnic group, is from Yunnan. Her motion is for the planned Xichang-Lijiang high-speed railway to be incorporated into the nation's Medium and Long-term Railway Network Plan.
The Xichang-Lijiang rail line is expected to connect Yunnan's famed tourist spot Lijiang and Xichang, the capital city of the Liangshan Yi Autonomous Prefecture in neighboring Sichuan Province.
Pen Cuo from the Tibetan Autonomous Region also expects the central government to prop up infrastructure building in his home region. He also stressed the significance of poverty-alleviation in Tibet.
"800 billion yuan will be invested in railway construction, and 1.8 trillion yuan will be invested in road construction and waterway projects," Premier Li promised while delivering the report, adding that the planning and construction of the Sichuan-Tibet Railway will be sped up.

In order to achieve the first centenary goal of building the country into a moderately prosperous society in all respects by 2020, the Chinese government considers 2019 as the "key year" in winning the "three tough battles" against risks, poverty and environmental pollution.
The government work report vowed to reduce China's rural poor population by over 10 million in 2019.
In a draft budget report to be reviewed during this year's NPC annual session, it is mentioned that 126.095 billion yuan, or 18.82 billion U.S. dollars, will be specifically allocated to fund poverty alleviation, an increase of 18.9 percent.
The budget report also emphasized that the increased funds will mostly be invested in areas with extreme poverty.

Caring for the elderly

China is aging quickly with its number of people aged 60 and above reaching 250 million, accounting for nearly 20 percent of its total population.
Cui Ronghua from northwest China's Shaanxi Province pays particular attention to the life of the elderly. 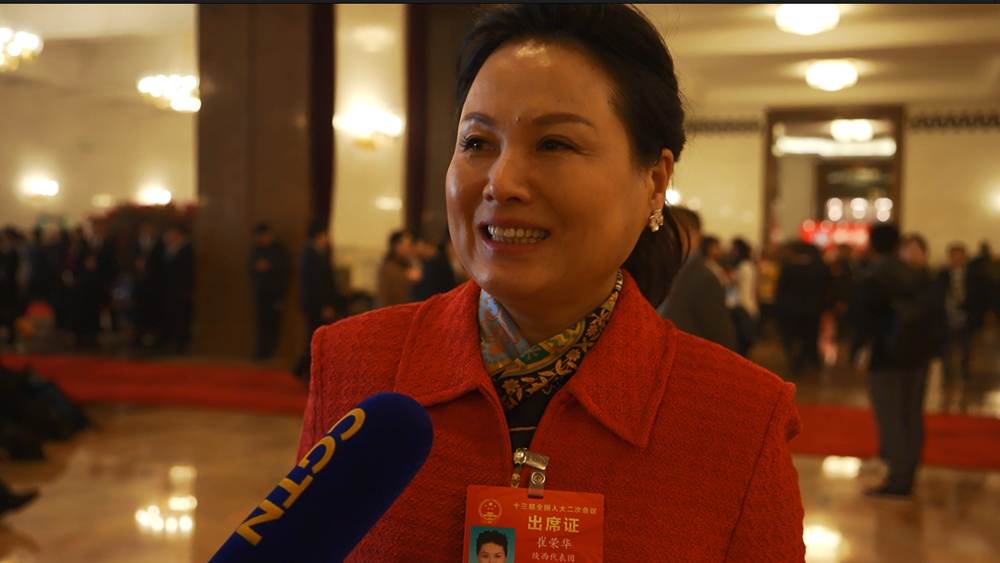 She suggested the establishment of the "time bank", which allows young people who volunteer to spend time with the elderly to save the same amount of time at the "bank", and "consume" that time period by requiring the accompany of young people when they get old.
The government work report promised the reform of the management of aged-care insurance funds and guaranteed the payment of pensions on time and in full.
"We will take significant steps to develop elderly care, especially community elderly care services," Premier Li said while delivering the report.
Pledging preferential policies toward institutions offering services in the community like day care, the Chinese premier said only when the elderly live happily can the young have a future to look forward to.

The training of manual talents

"The motion I brought to the NPC session this year calls for an increase in financial support for the education of skilled workers," said Yang Jinlong, a post-90s NPC deputy from east China's Zhejiang Province. 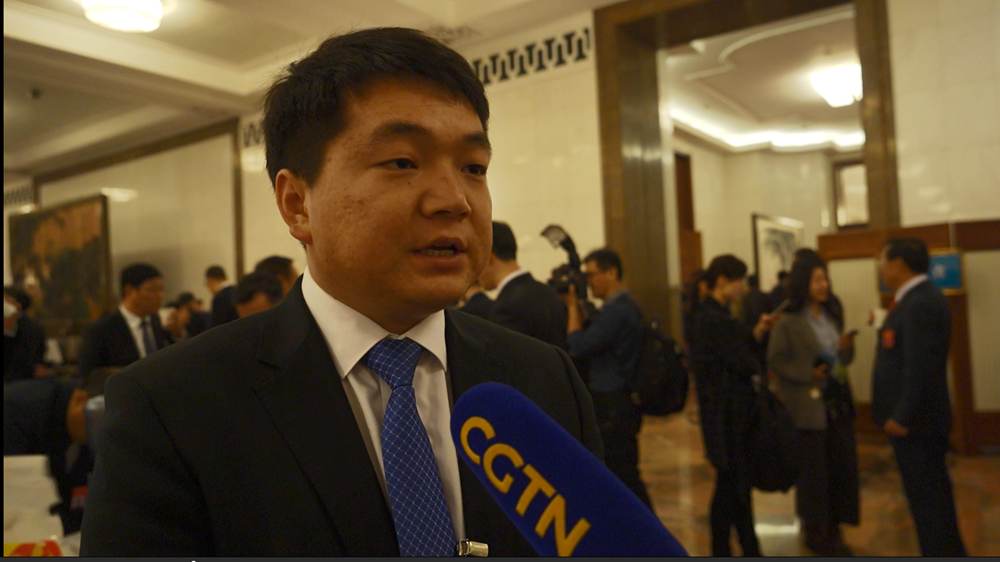 Yang is a teacher at the Hangzhou Technician Institute.
He said currently, vocational education still faces a lot of problems, including the difficulty in recruiting students and the lack of teaching and learning equipment.
Li Qiong from southeast China's Fujian Province held similar concerns. She told CGTN that more investment should be put in vocational education so that manual workers' qualifications are not limited to junior or middle school.
The Chinese government has paid attention to this field in its work report.
"We will expand the coverage of scholarships and grants for vocational college students and raise the level of financial assistance, and speed up work to align vocational technical grade certificates with academic credentials," reads the report.
The report also says the central government will greatly increase fiscal support for vocational colleges, adding that a state scholarship for secondary vocational education will be established. 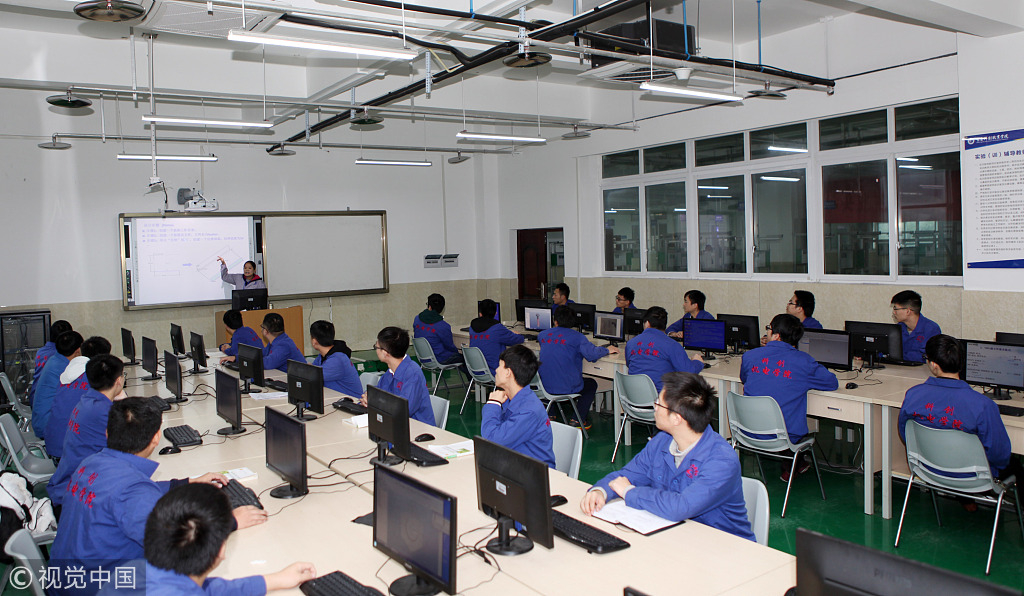 Students at a vocational school in Chongqing Municipality learn about industrial robots and 3D printing in class, Oct. 24, 2017. /VCG Photo

Students at a vocational school in Chongqing Municipality learn about industrial robots and 3D printing in class, Oct. 24, 2017. /VCG Photo

It is impossible to exhaust all the motions and suggestions brought to Beijing by the almost 3,000 NPC deputies, but the scale and scope of issues covered in this year's government work report are massive, and needless to say, the report has far-reaching impact on Chinese people's life.
The greater the overlap between NPC deputies' motions and the policies pursued by the central government, the stronger the evidence that all sides are pulling in the same direction to transform Chinese society for the betterment of its people.
Read more:
Graphics: What messages has Premier Li delivered in 2019 government work report?
Decoding China's government work reports through keywords
Reporter: Zhou Jingnan, Li Jingjing
Video Editor: Li Jingjing
Article written by: Zhou Jingnan
Filmed by: Zhou Jinxi
Cover photo designer: Wang Xuecheng