All the highlights from the Asian Culture Carnival
By Hong Yaobin, Wu Yan 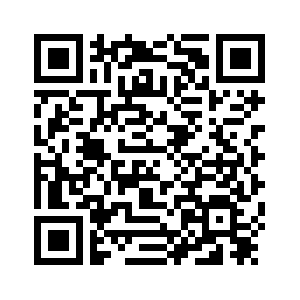 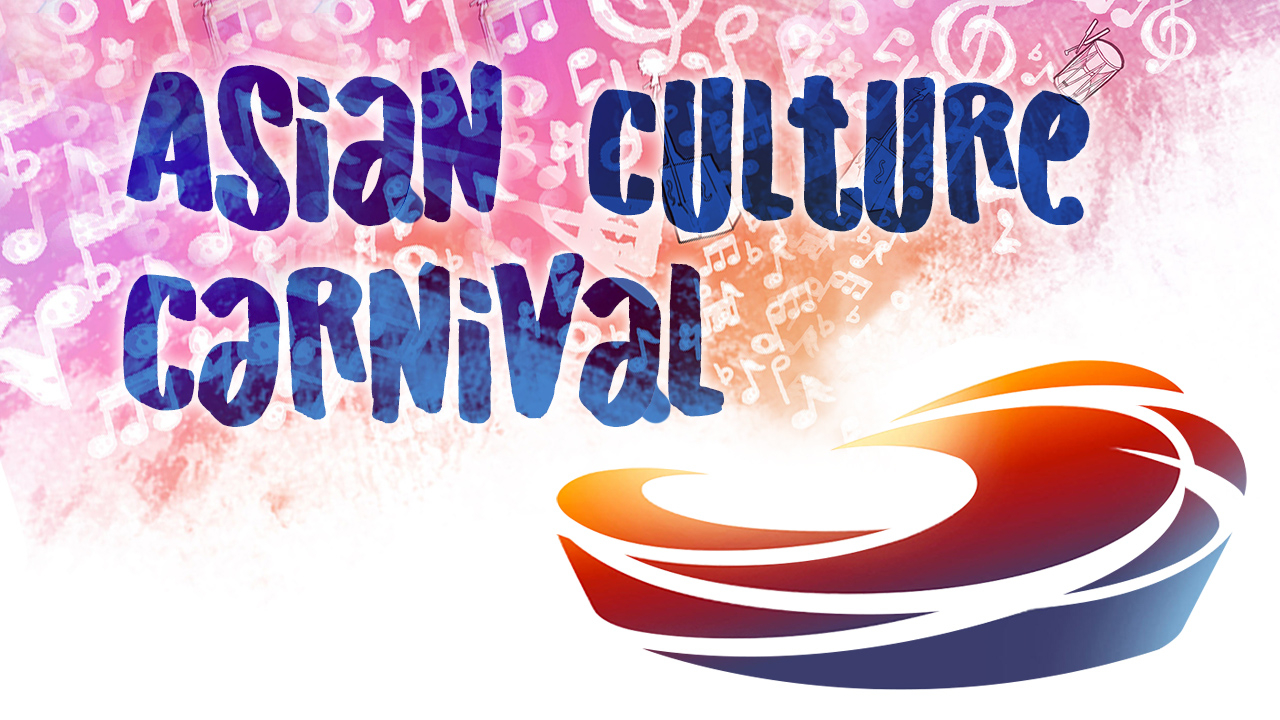 Aiming at promoting exchanges between the Asian civilizations and the rest of the world, the Conference on Dialogue of Asian Civilizations (CDAC) kicked off on Wednesday in China's capital Beijing.
One of the conference's highly anticipated events, the Asian Culture Carnival, hosted by China Media Group (CMG), was staged at Beijing's National Stadium on Wednesday night.
Chinese President Xi Jinping and his wife Peng Liyuan, as well as the leaders of countries and international organizations and their spouses, attended the CDAC and enjoyed the magnificent, diverse gala.
06:58 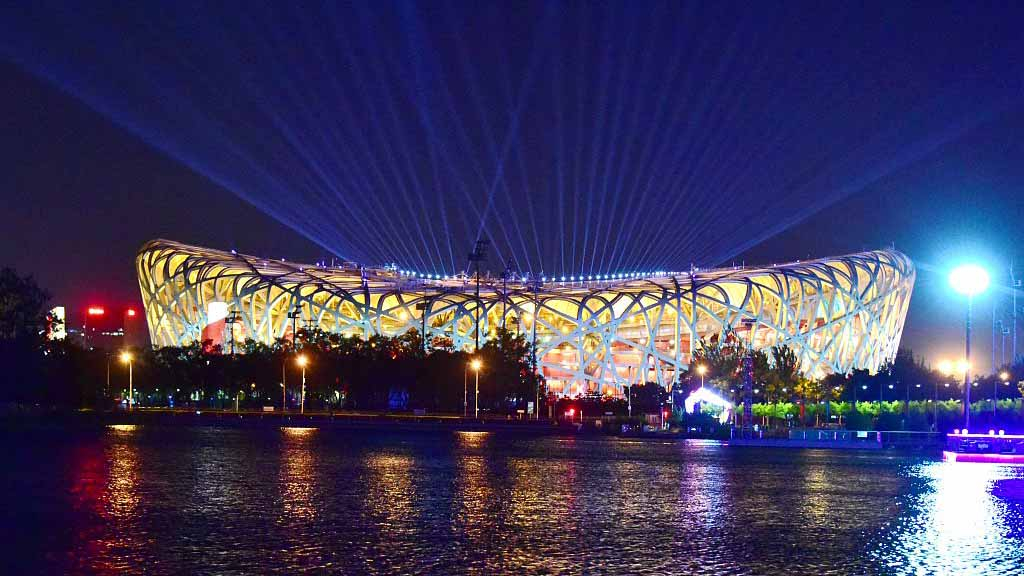 With the theme of "Celebration of Youth, Dream of Asia," the extravaganza showcased the distinctive charm of Asian civilizations and Chinese civilization through various art performances and high-tech stage effects.
More than 30,000 performers from 47 countries took part in 15 performances at the celebration. The cast included famous performers from different countries, Asian youth leaders and world-class artists.

A visual feast of Asian culture

The carnival opened with a spectacular performance of its theme song, "Our Asia," sung by musicians and students from many different countries. 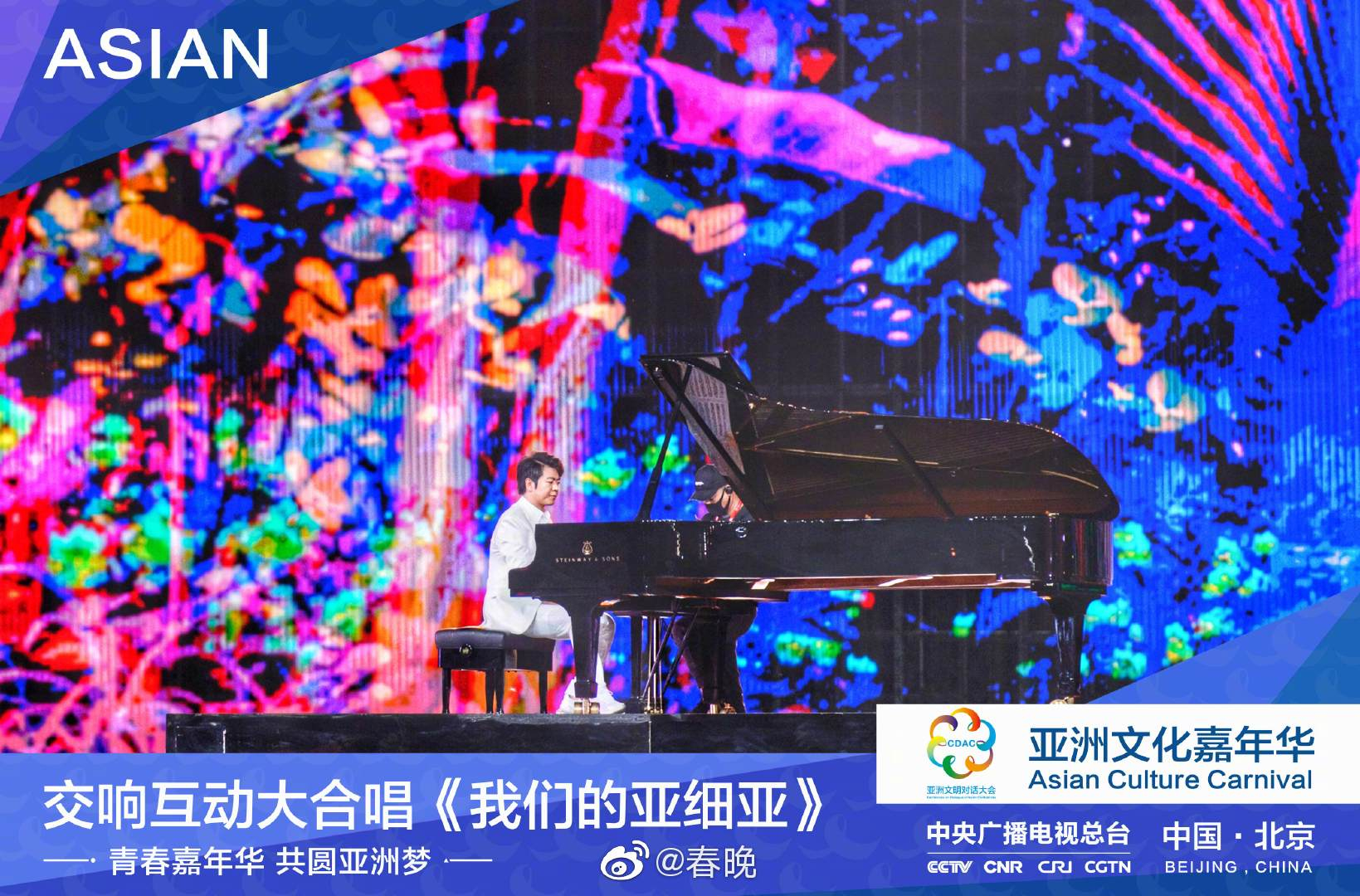 It was followed with a parade of CDAC nations, with artists representing 47 countries and regions. Fashion model and Miss World 2017, Zhang Zilin, was China's representative.
Conducted by Tang Muhai, the opening show was a collaboration with renowned Chinese pianist Lang Lang, bands from several Asian countries, and prestigious orchestras, including the China National Symphony Orchestra and the China National Opera House Symphony.
15:34 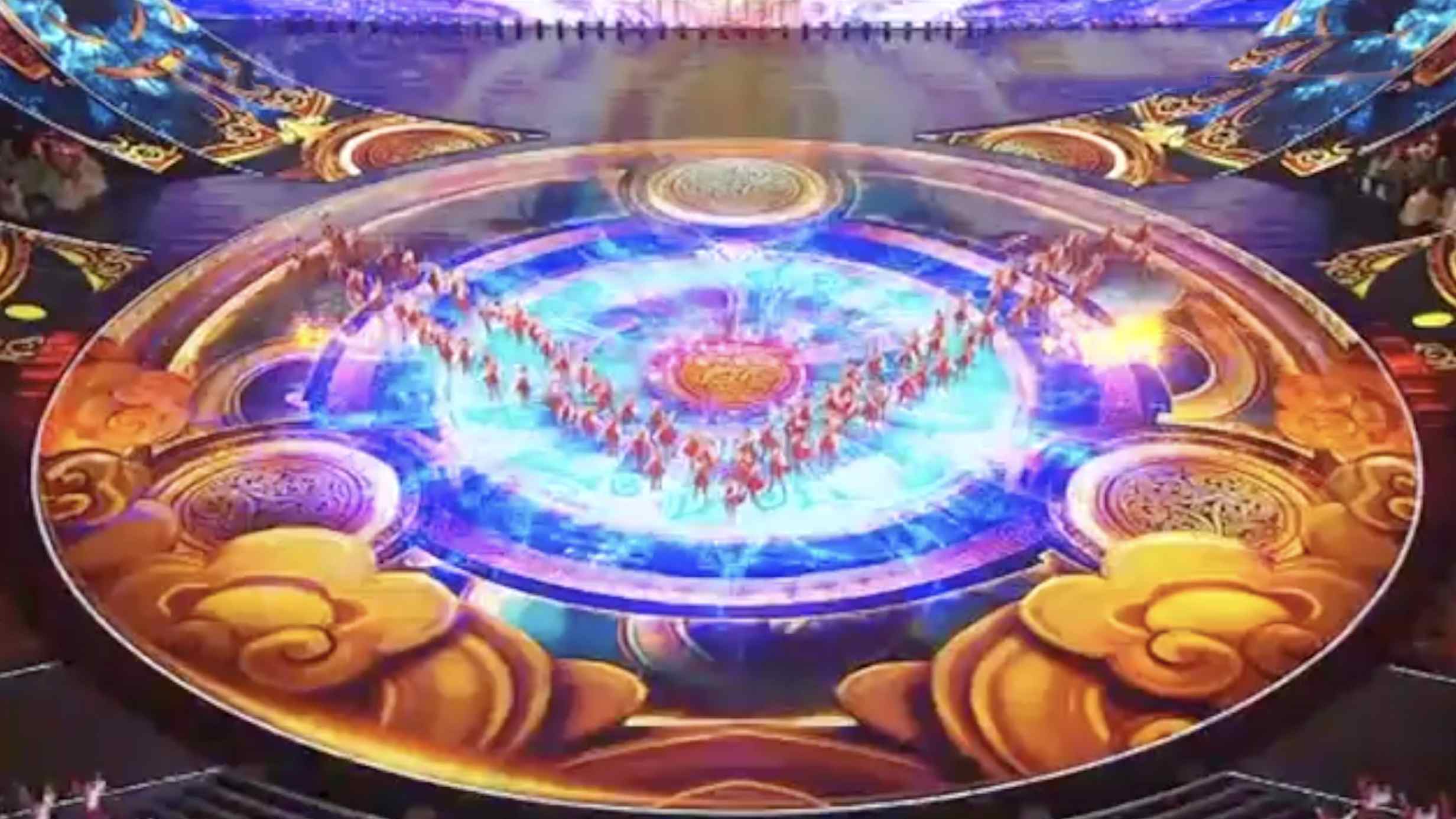 Dancers from different countries, including Indonesia, Armenia, Lebanon, Turkey, Azerbaijan, Tajikistan, Russia, and the Democratic People's Republic of Korea (DPRK), joined their Chinese colleagues from Tibet Autonomous Region, and Jilin and Hubei provinces for a dance show titled, "Passion of Joy."
Dressed in their traditional costumes, the artists performed the unique dance styles of their countries, showcasing a perfect blend of distinct cultures.
Artists from Japan's Wadaiko Sai and the Republic Of Korea's (ROK) MIRA Dance Company joined Chinese drummers from the Shanxi Chongdaoyuan Drum Orchestra for "the Grand Regatta," a performance which featured a wide variety of percussion instruments and a drum dance.
10:27 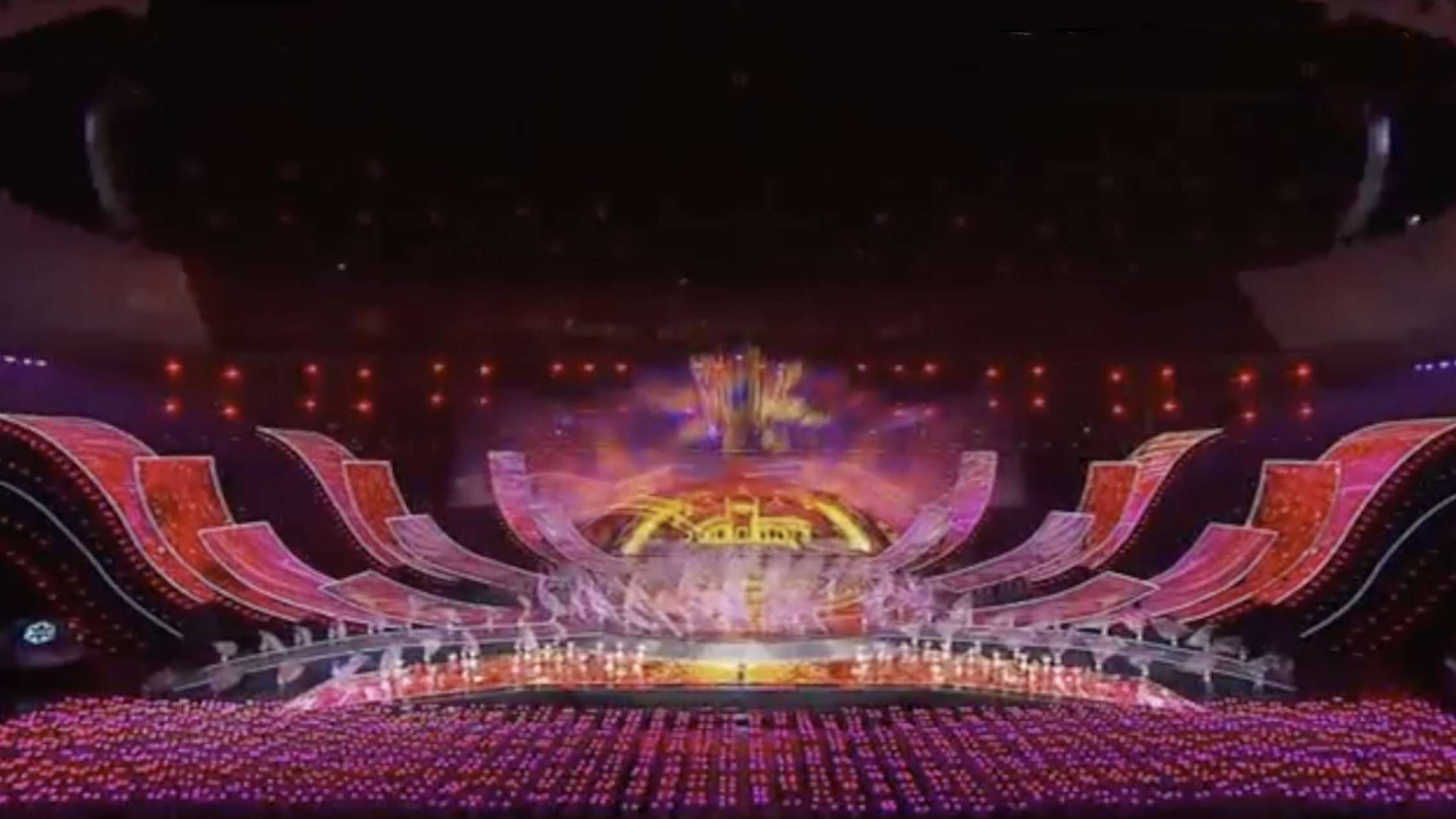 Using all manner of percussive and acoustic effects, the show presented a fusion of traditional Chinese, Japanese and Korean drumming arts, as well as a mixture of drum dance and Chinese martial arts.
Artists from Cambodia, Sri Lanka, Pakistan, Malaysia, Jordan, the Philippines, India and China showed the audience "A Panorama of Asia."
The program featured some of the most famous traditional dances and songs from their countries such as Malaysia's "Rasa Sayang" and India's "Your Love". 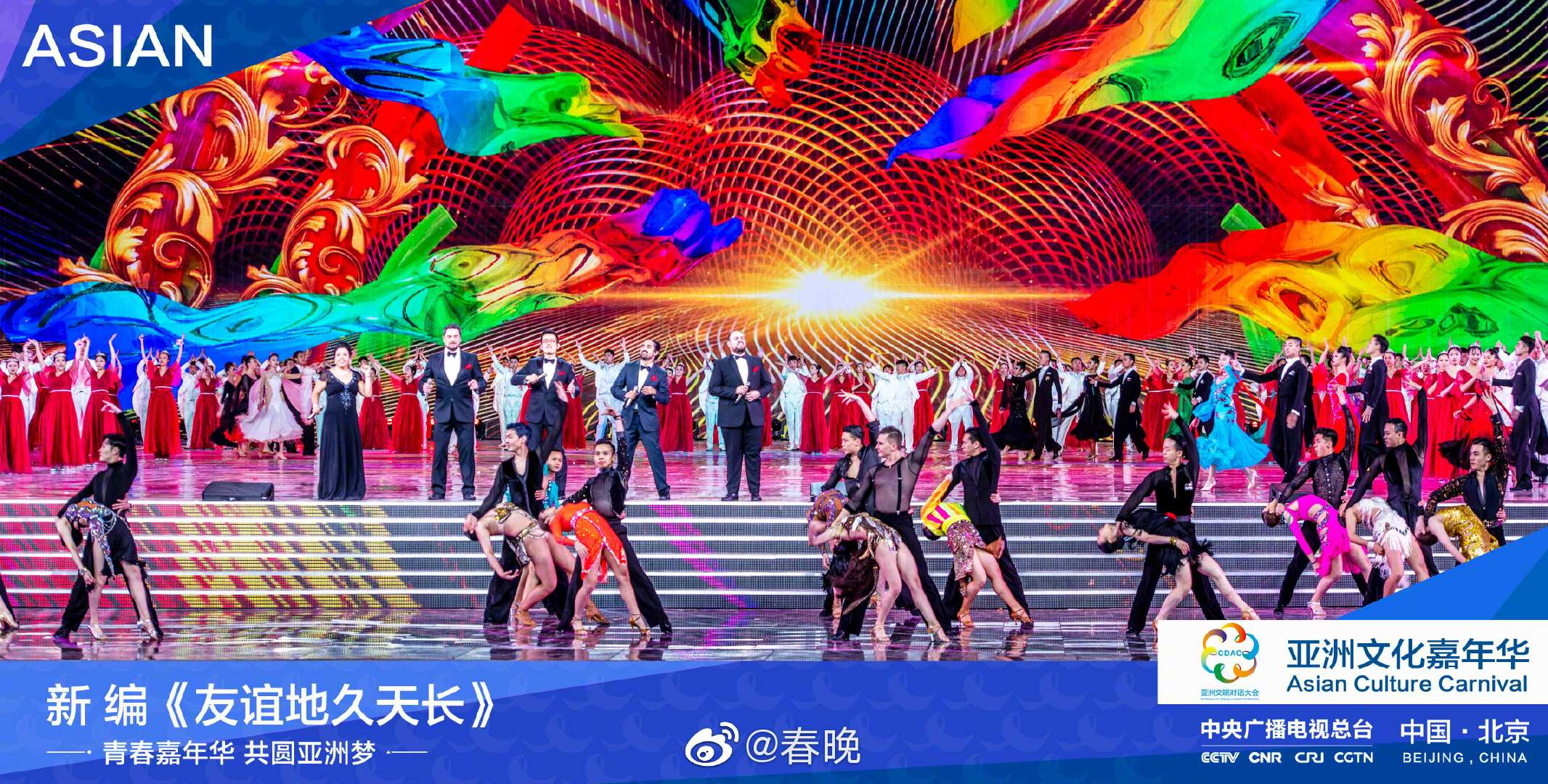 One of the world's most beloved songs, "Auld Lang Syne", received a new rendition at the gala. Singers from Greece, China, India, Syria, and Peru performed the song, accompanied by ballroom dancers from across Asia, singing the praise of the friendship of Asian nations and harmonious co-existence of various civilizations.
"Guests from Afar, Please Stay" was sung again 11 years after the 2008 Olympic Games in the Bird's Nest to welcome China's Asian neighbors and other friends from across the globe. This time, Dimash Kudaibergen from Kazakhstan, known for his “dolphin sound,” joined in an array of Chinese artists to give the audience a special acoustic feast.

A gathering of world-class artists

The carnival represented a great convergence and communication of cultures from around Asia and was a joyful gathering of peoples and nations, as well as globally famous artists.
04:21 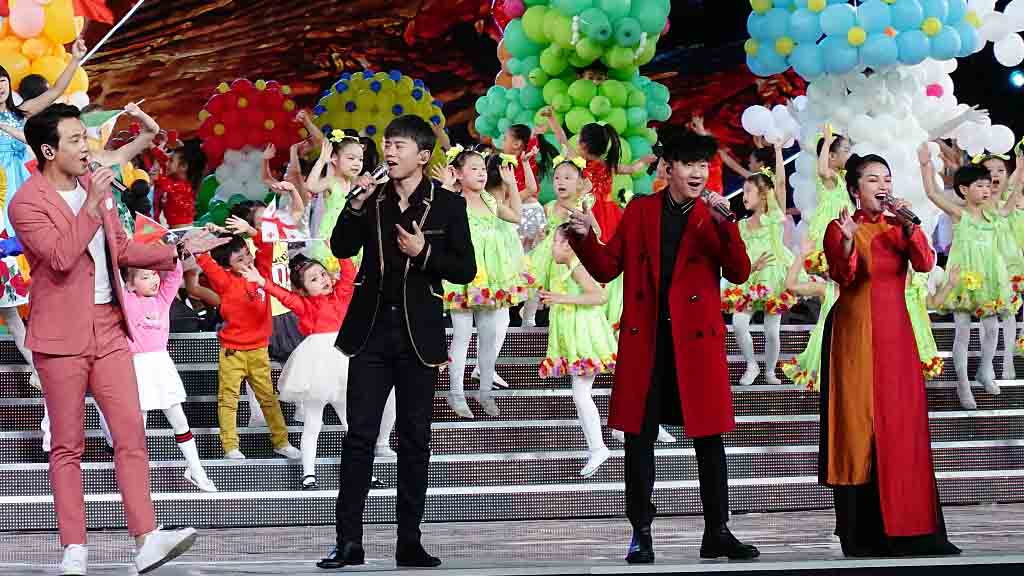 Celebrated singers from five Asian countries wowed the audience with the collaborative song "Flowers and Neighbors," which expressed the hope shared by Asian countries to deepen friendly ties with neighbors and to seek peace and harmony.
The talented artists included renowned Singaporean singer and songwriter JJ Lin, Do To Hoa from Vietnam, Eden Holan from Israel, Jung Ji-hoon from the ROK, Chinese singer Zhang Jie.
04:29 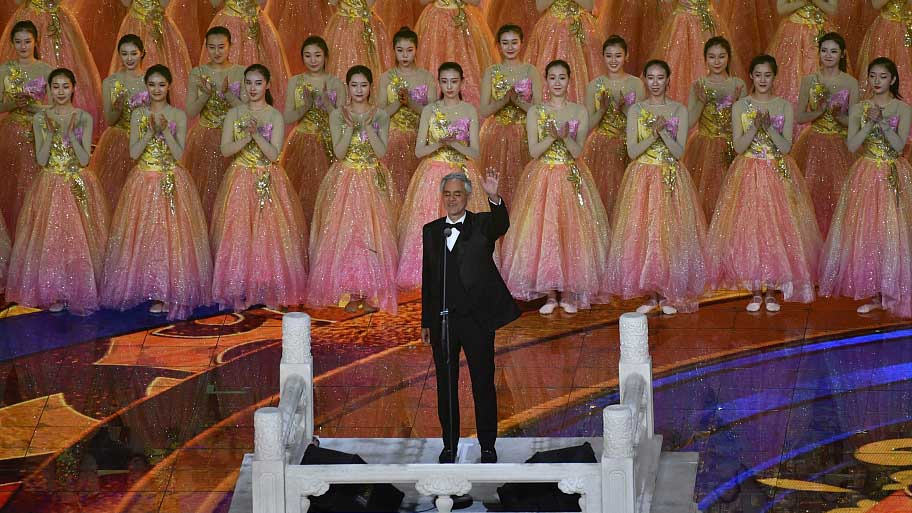 World famous Italian singer Andrea Bocelli, whose voice has described by record producer David Foster as the most beautiful in the world, sang one of the best-known tenor arias in all opera – "Nessun Dorma" from opera "Turandot."
Conducted by Chinese conductor Tang Muhai, the show featured the classic operatic piece and amazing voices lifted the atmosphere to a crescendo. 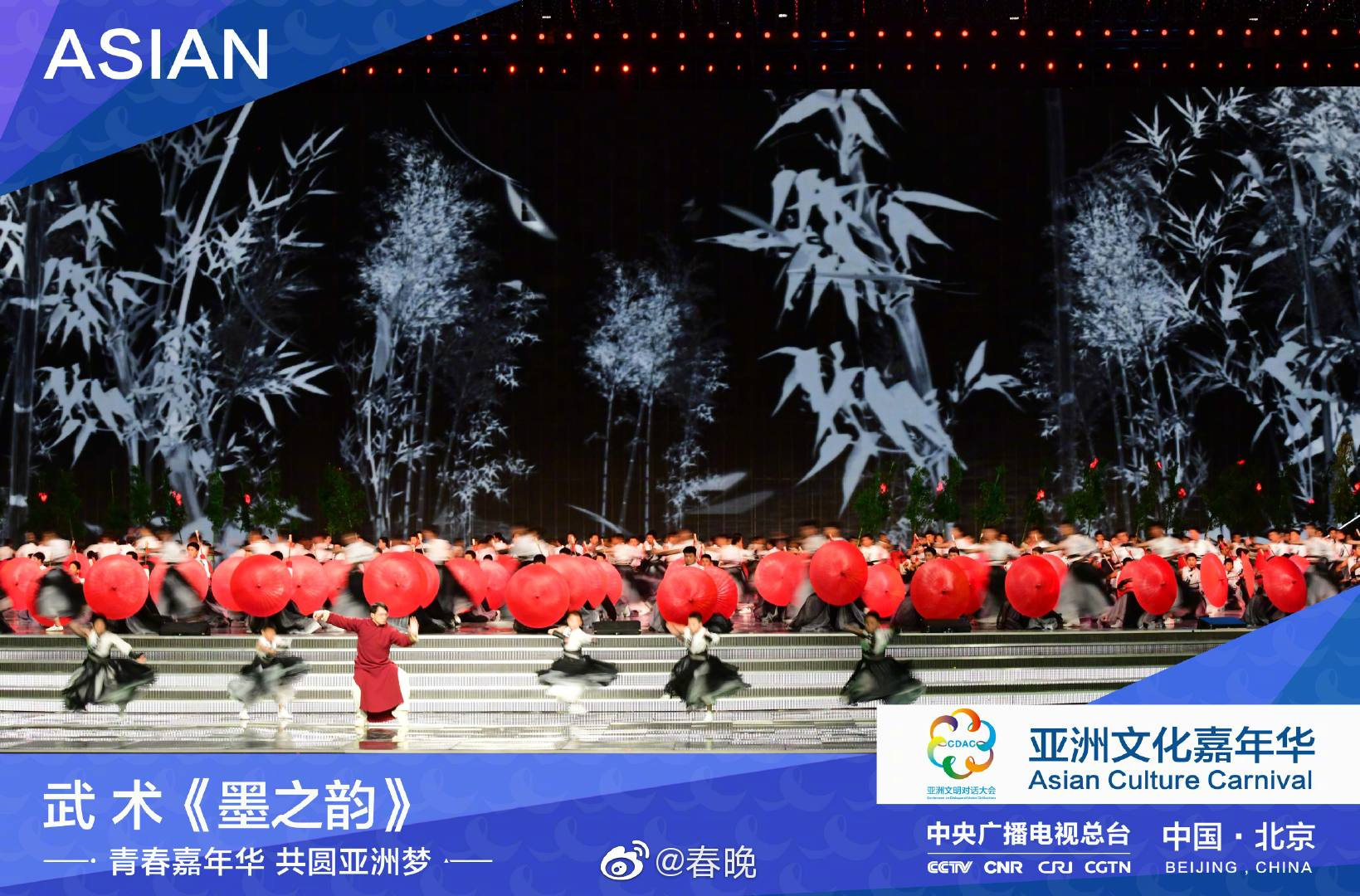 Martial arts are one of the most well-known examples of traditional Chinese culture worldwide. International communities have learned about kung fu mostly from films starring Bruce Lee, Jackie Chan, Donnie Yen and Jet Li, among many others.
Jackie Chan joined the carnival to show "The Charm of Chinese Ink Art" through kung fu. In a bamboo grove, kung fu performers displayed their skills with the melody of Chinese zither, creating an interesting integration of motion and quietness.

The gala also championed young talents from Asian countries by having them revitalize time-honored songs and cultural traditions on stage. 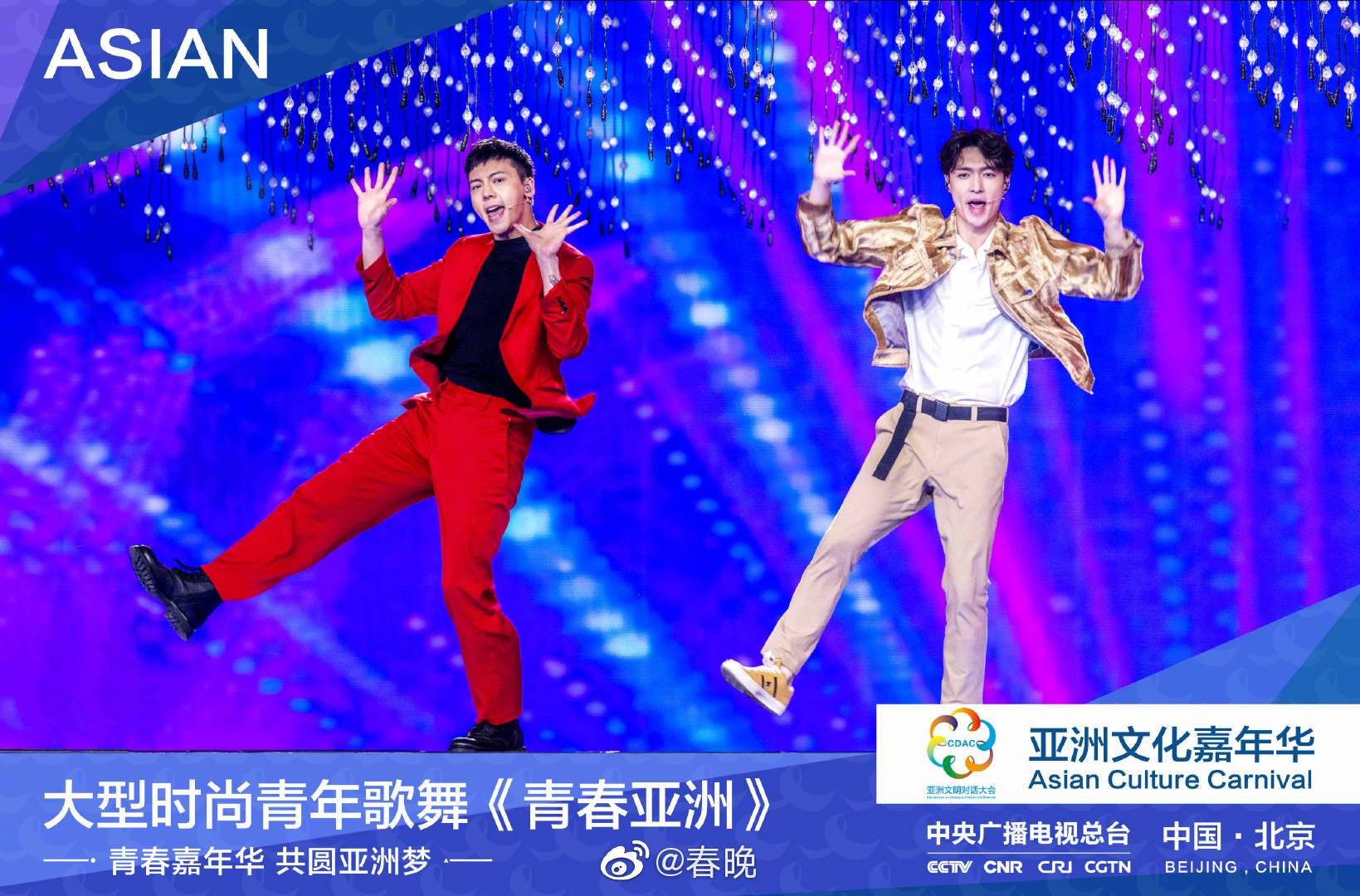 The future belongs to the youth. Asian culture is proclaiming its great potential to the world with its vitality, and the Asian Culture Carnival is also brimming with the power the next generation tonight.
In "A youthful Asia," William Chan from the Hong Kong Special Administrative Region and Zhang Yixing led a group of energetic dancers in cheering on Asia.
04:28 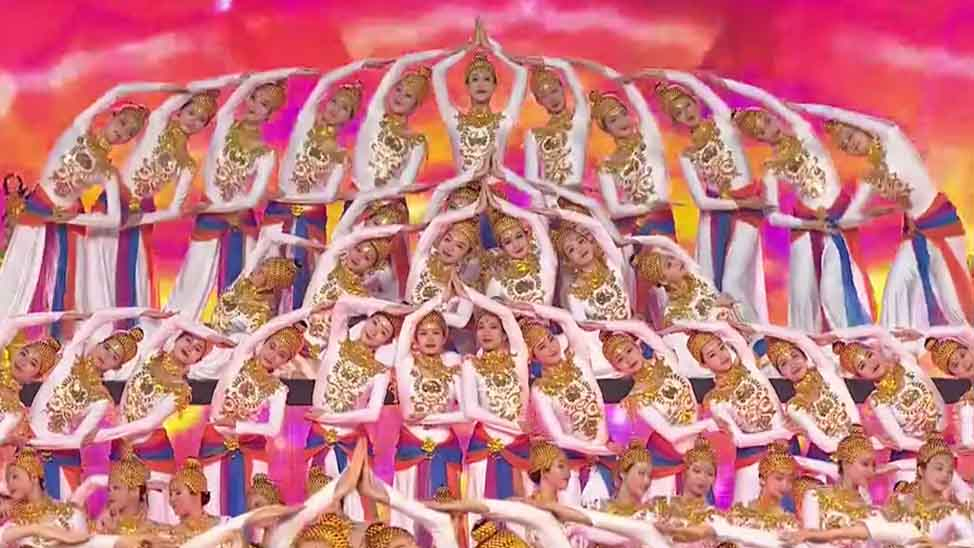 Inspired by the famous Dunhuang cave artworks located on the ancient Silk Road, the show "Silk Road Blossoms" featured traditional Chinese dance with a focus on hand gestures.
It was performed by Chinese university students and young dance artists, stressing the diverse cultures of China and other countries along the Silk Road. 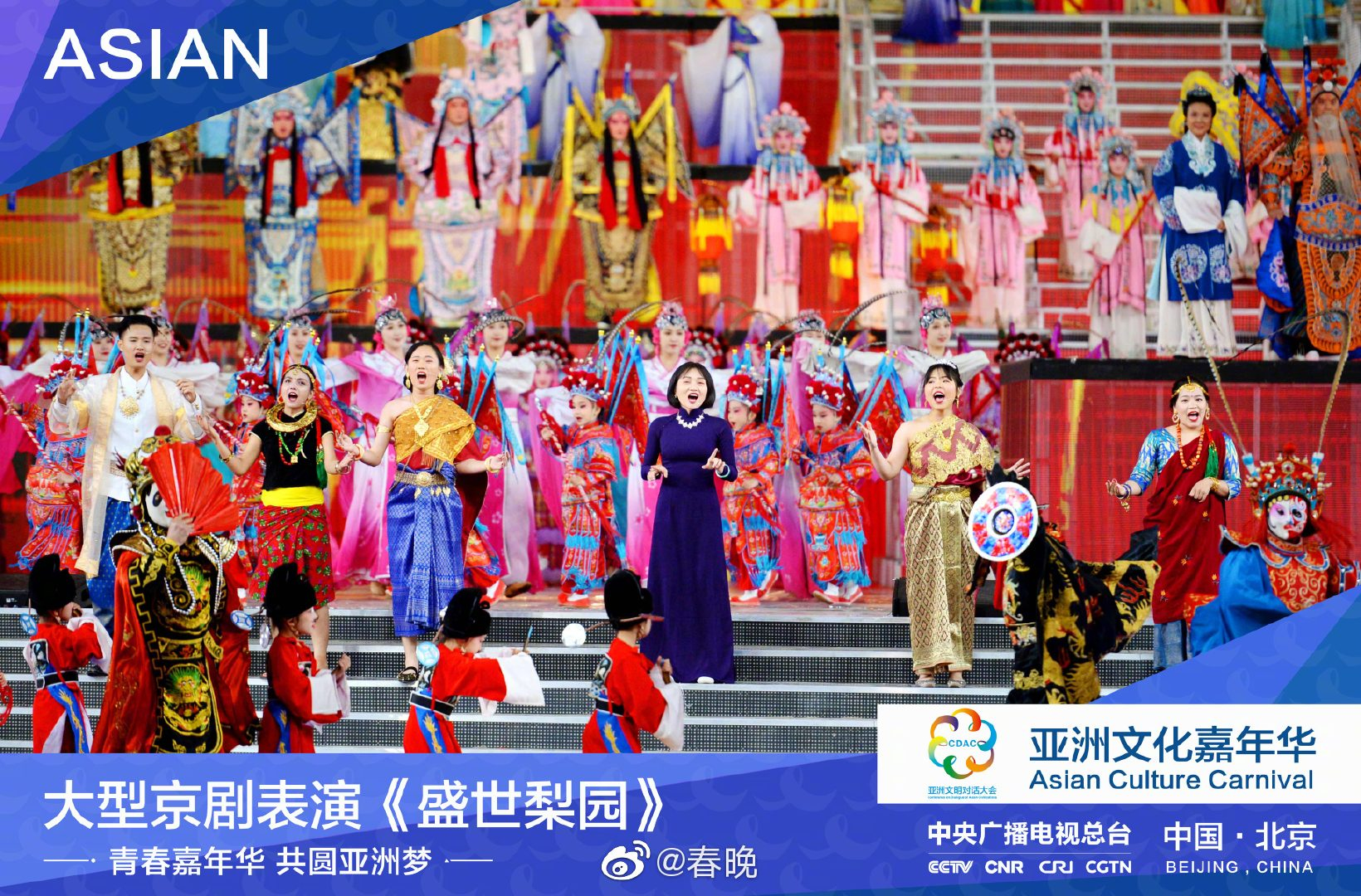 Inscribed on the Representative List of the Intangible Cultural Heritage of Humanity by UNESCO in 2009, Peking Opera is widely regarded as quintessentially Chinese cultural treasure.
The time-honored art displayed a new and special interpretation at the gala on Wednesday night. China's best performers were joined by young artists and international Peking Opera enthusiasts in the medley "An Era of Prosperity".
Read more:
Live: Celebrate Asian Culture Carnival
Xi: The variety of Asian civilizations makes the region's culture more colorful and dynamic