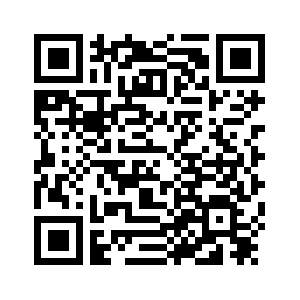 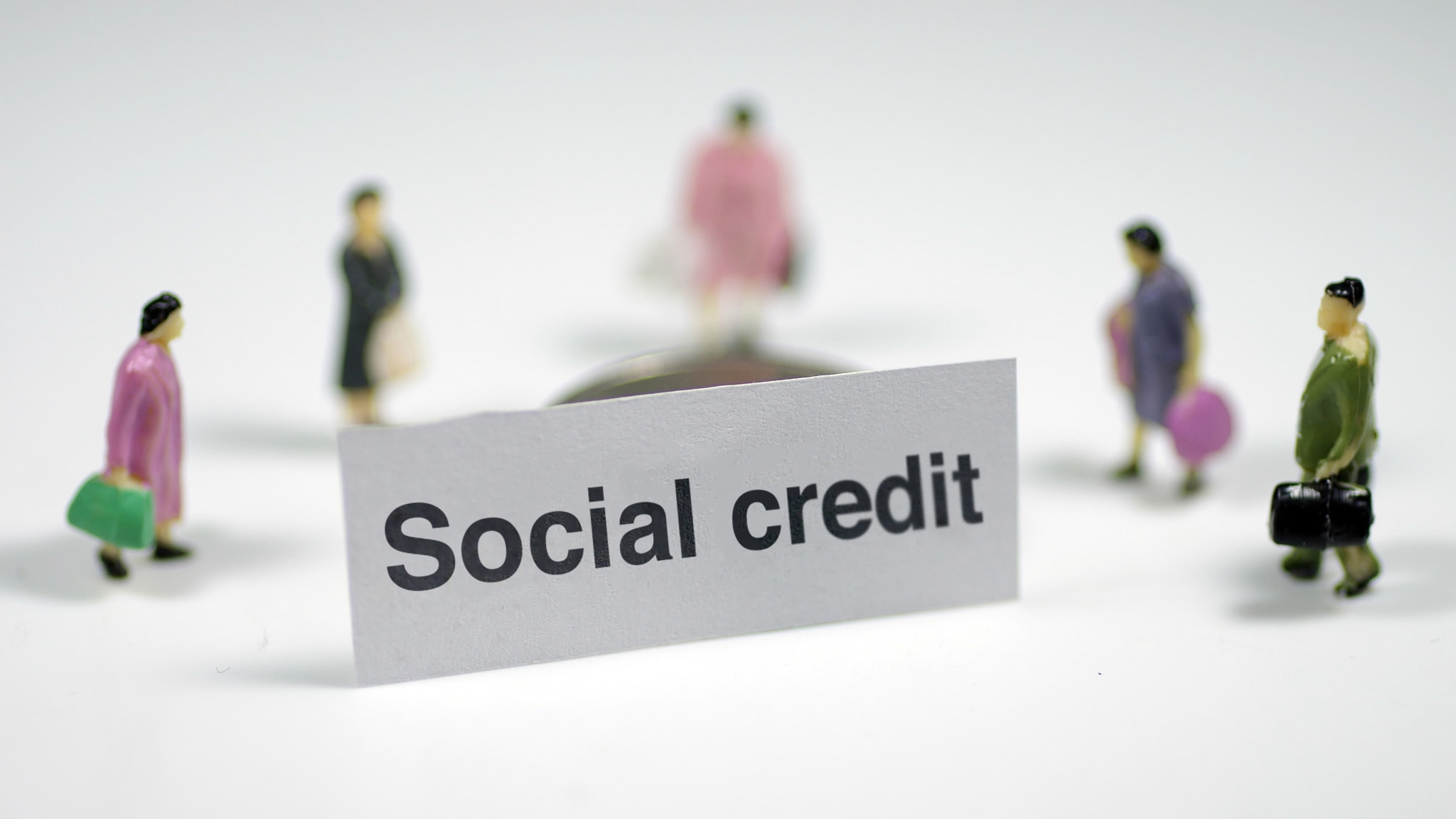 An episode from the popular TV series "Black Mirror" depicts a dystopian society where every person is constantly rated by others, and all their actions result in a score that follows them everywhere. After one woman makes a few bad decisions, her life quickly spirals into despair.
When news got out that China is building a "social credit system" for all its citizens, Western media and public took it as if that chilling episode had come to life, and they were horrified.
The news is true: Beijing looks to establish a national social credit system (SCS) by 2020, when all public information would be gathered in the credit information platform, which is open to everyone. In the meantime, a reward and punishment mechanism will be set up to enforce the system, which is driven by big data.

As China's State Council outlined in a 2014 roadmap plan, the SCS will assess areas including individual behaviors, government and commercial affairs, and the judicial system in order to promote a culture of trust throughout society, allowing "the trustworthy to roam everywhere under heaven while making the discredited unable to move a step," in the words of the government.
"This is an important and novel approach by Beijing to assess individuals' credit and tie it to their whole life," said an unnamed official from the municipal Development and Reform Commission quoted by the Xinhua News Agency.

Hailed as innovative governance in China and criticized as invasive surveillance overseas, there have been some confusion and myths about how the SCS works.
The Chinese word "credit" – xinyong – basically means the ability to not only fulfill one's financial and legal obligations, but also uphold honesty and integrity. In this context, a more accurate word should be "trustworthiness."
In the past few decades, China's economic growth has outpaced its ability to safeguard market order and create a healthy business environment. A series of high-profile food and drug safety scandals have rocked the nation, and Chinese people have had to navigate the pitfalls of fake products and frauds to unpaid wages and copyright infringements.
The SCS, built on a vast amount of information collected by different state authorities, financial services and various levels of government, will help provide guidance for business activities and plug some regulatory gaps in China's developing market economy.

The financial sector in particular faces the challenge of providing services to the largest population in the world that lacks a credit history, and official figures show more than 225 million Chinese citizens do not have bank accounts.
The People's Bank of China (PBOC) launched the Credit Reference Center in 2006. But by 2015, it could only cover 25 percent of the country's population, because the majority of them were not on the financial radar.
To expand consumer credit coverage, the PBOC has authorized eight commercial companies to roll out their own financial credit scoring systems, such as Zhima (Sesame) Credit developed by Alibaba's Ant Financial.
All eight companies have run their pilots, but up till now none has received an official license. This is due to a number of concerns including inadequate privacy protection and alleged over-collection of user data. Different companies are also in a competition to attract customers by incentivizing them with credit points.
Zhima Credit is widely considered to be a precursor for, and often confused with, the planned official SCS. Every Alipay user gets a real score influenced by their activities on Alibaba's flatforms. There are benefits and perks if you raise your score above the average by having desirable "habits" like paying bills on time, having high-score friends and of course, spending more money on the company's platforms.
As the online payment platform has become an integrated part of everyday life, the perks offered through Alipay prove to be rather useful. Good-credit users enjoy many advantages like the waiving of deposits in bike and car rentals, fast-tracked visa applications and even more matches on dating sites. But what all of this looks like is a loyalty scheme rather than anything that can meaningfully reflect people's trustworthiness. 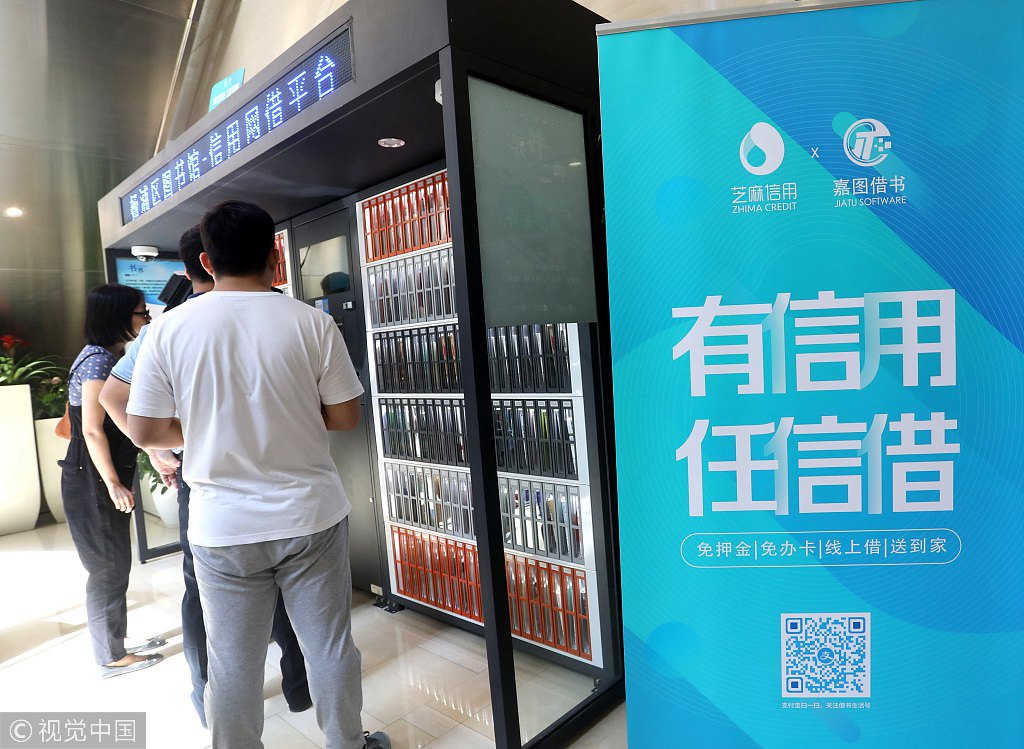 A smart bookcase allows people with a Zhima Credit score above 600 to borrow library books without deposits in Shanghai, September 13, 2017. /VCG Photo

A smart bookcase allows people with a Zhima Credit score above 600 to borrow library books without deposits in Shanghai, September 13, 2017. /VCG Photo

The good news is there is no punishment for a low score with Zhima Credit, which is an opt-in feature.
It is unclear what algorithms are used to rate users by commercial providers like Ant Financial, and that may have led to the misconception that people's online shopping habits and social media contacts could affect their official credit rating in a similar way.
The government-led SCS is mandatory with real-life repercussions both financially and socially. This is best summed up in the words of President Xi Jinping: "Lose trust in one area, face restrictions everywhere." Serious offenders, known as "laolai", who have landed on a "blacklist," can even affect their family members. Like the blacklist, a red list to honor the trustworthy is also available through the Credit China website.
So far, the "blacklist" has dealt primarily with companies rather than individuals. The latter are largely made up of people who defaulted on debts, a new study by the Technical University of Munich discovered.
Currently, a small proportion of China's population is participating in government-led local pilots in some 40 selected cities. One of those cities is Rongcheng in Shandong Province. Using a grading system from a high of AAA down to D, the pilot program gives each one of Rongcheng's 740,000 residents a starting score of 1,000 points. Additional points are awarded for behaviors that are considered pro-social, like donating to charity and volunteering, and deductions are made for bad behaviors like traffic violations.
Government officials are also being graded. An unnamed official from the local credit office told Guangming Daily that since the test run, 18 Party members have been downgraded below B and as a result lost their chances for advancement and another 129 Party members have been barred from future candidacy for local-level officialdom. Only those with grade A and above are eligible for promotion, the official said.
But it is important to note that Rongcheng's example is only a local experiment, and how different local programs combined with commercial data will factor in the central SCS remains to be seen. 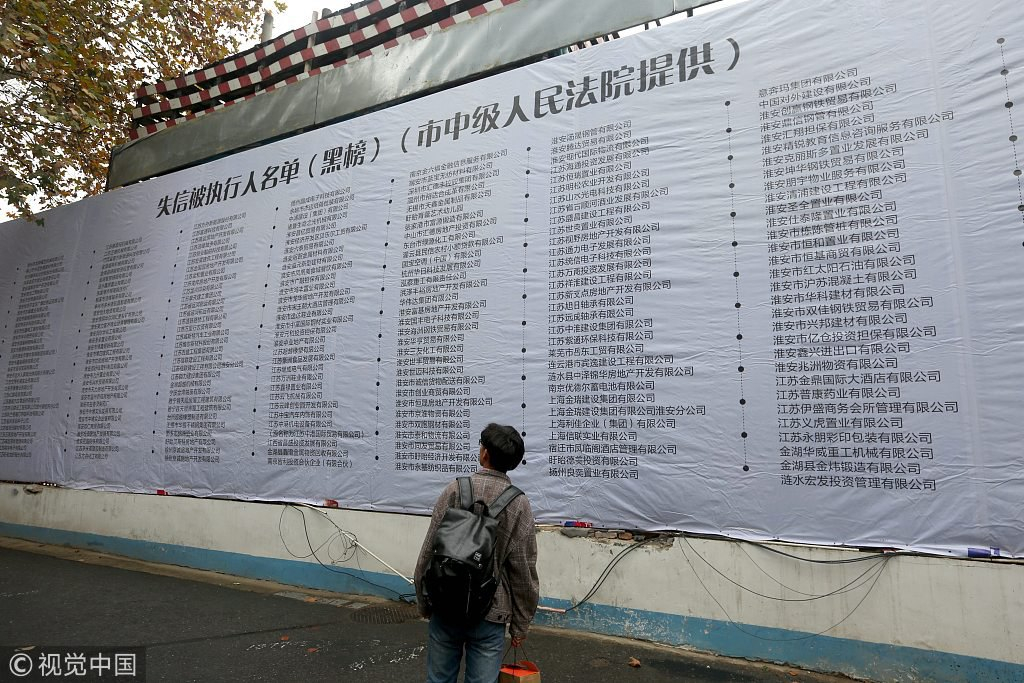 A list of discredited companies provided by the Intermediate People's Court in Huai'an, Jiangsu Province, is seen on a wall in the city, November 18, 2018. /VCG Photo

A list of discredited companies provided by the Intermediate People's Court in Huai'an, Jiangsu Province, is seen on a wall in the city, November 18, 2018. /VCG Photo

Is 'Big Brother' watching you?

Despite the differences between commercial and official SCSs, it is speculated that commercial user data will be gathered for official use.
The government said in August that it would carry out big data mining. The country's civil aviation and railway authorities are cooperating with various government bodies in information sharing. Financial sector experts are looking into ways to incorporate the development of FinTech (financial technology) into the construction of the SCS. Different sectors have been mobilized in a concerted effort to facilitate data profiling. The effects are already being felt by some air passengers.
As pilot programs have shown, the SCS has a moral dimension. How personal merits can be quantified in the form of a rating is where things can get complicated and dystopian fears come in. 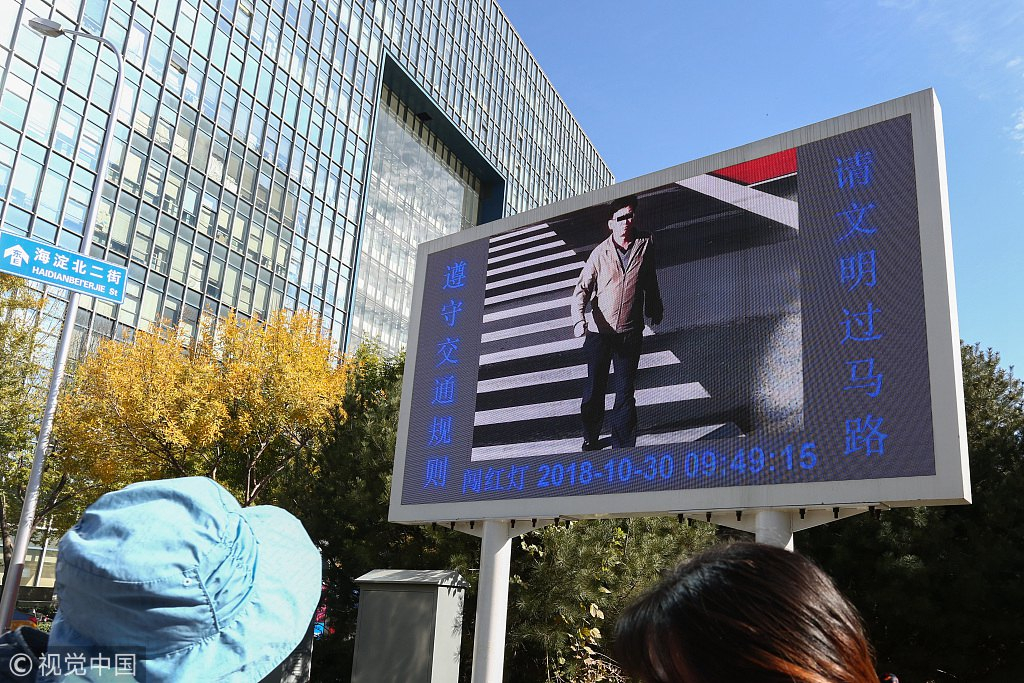 A jaywalker caught on camera is shown on a public screen in the street of Beijing, October 30, 2018. /VCG Photo

A jaywalker caught on camera is shown on a public screen in the street of Beijing, October 30, 2018. /VCG Photo

Given the scale and social impact of the system, concerns over privacy, transparency and data security are not unreasonable. Who is to decide what the good and bad behaviors are? Could there be technical and administrative loopholes – "hacks" and backdoors to manipulate ratings, for example? And would it have a spiraling effect on people's lives and create new divisions in society? Those are just a few among many questions raised by common people and critics alike. While the system is all about "trustworthiness," the biggest concern is likely to be that of its own.

Most Chinese are saying yes to SCS

A 2018 study led by Dr. Genia Kostka at Frerie Universitat Berlin found an overwhelming 80 percent of Chinese Internet users hold positive views of the SCS, with particularly high-level of approval reported among high-income, urban and university educated respondents. This may be surprising to many in the West since the middle class demographic are often thought to be the most liberal thinking. There is more: Nearly 60 percent of respondents think the SCS should be run by the central government, while only 1.5 percent say private companies should manage it.
As mentioned, a lack of trust is acutely felt in China. Among the top concerns in the country in 2016, according to Pew Research, corrupt officials and corporations, food and drug safety, crime and quality of manufactured goods were all trust-related. Meanwhile, 47 percent of Chinese people considered "moral decline" a serious problem in their country, compared to 15 percent worldwide, a 2017 survey by Ipsos Public Affairs found. These findings could perhaps explain why issues like privacy and personal freedom have receded into the background.
In a video posted on YouTube, people in Shanghai are asked about their experience with commercial credit systems and their opinion on the government's SCS. A majority of those interviewed welcome the government's plan, convinced that, as law-abiding citizens, their interests will be protected by the SCS. On the issue of privacy, almost everyone believes their personal information is already out there, therefore sharing it with the government wouldn't hurt. Someone also points out that data leak is a problem in America too, citing Facebook as an example.
"In this day and age, there is no such thing as privacy," says one of them. And he might have a point.