Fu Ying, chairperson of the Foreign Affairs Committee of China's National People's Congress, stressed that it "may not be realistic" to expect "regime collapse" as a solution to the DPRK nuclear issue in the short term, though the United States has long taken a stance of non-recognition toward the country, with "regime change" as its main goal.
The 64-year-old veteran diplomat, who participated in the Three-Party Talks between China, the DPRK and the US in 2003 as the director general of the Asian Department of the Chinese Foreign Ministry, recently made the remarks in a strategy paper written for the John L. Thornton China Center of American think tank Brookings Institution. 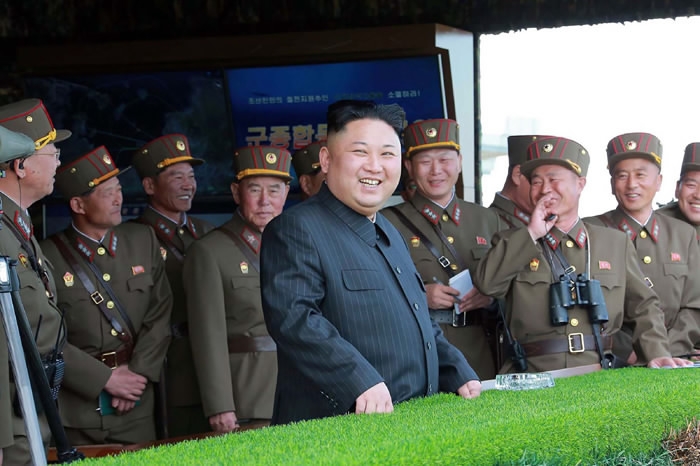 DPRK leader Kim Jong Un attends a combined fire demonstration of the services of the Korean People's Army in celebration of its 85th founding anniversary on April 25, 2017. /VCG Photo
In her book titled "The Korean nuclear issue: Past, present, and future – A Chinese perspective," Fu indicated there are three possibilities for the development of the issue, including the vicious cycle of US and UN sanctions followed by the DPRK's nuclear and missile tests until reaching a tipping point, the fall of the DPRK's government and the restart of talks.
The first possibility could see a spiral of intensified sanctions and continued nuclear testing until the DPRK's nuclear and missile technologies "reach a tipping point." In that case, those who oppose its possession of nuclear weapons would face a hard choice of "taking extreme action with unknown consequences, or tolerating it," Fu stated.
As for the second possibility, despite the White House's intention of pushing the DPRK "to undergo internal changes" by intensifying sanctions, DPRK leader Kim Jong Un has stabilized the domestic situation, she said, stressing that "the expectation of regime collapse as a solution to the Korean nuclear issue may not be realistic in the short term." 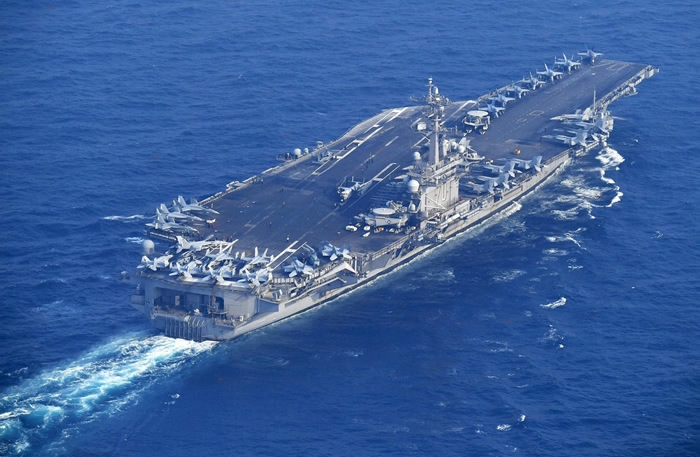 American aircraft carrier USS Carl Vinson heads to the vicinity of the Korean Peninsula for a joint drill with the South Korean Navy on April 29, 2017. /VCG Photo
Fu suggested the third possibility – restarting talks and serious negotiations – "may ease or even resolve" the issue, though it is harder now compared with the time when the Three-Party Talks and the Six-Party talks were held between 2003 and 2007. She said mistrust between the US and the DPRK has deepened and the latter has carried out five nuclear tests and numerous missile tests since 2005.
The former senior diplomat reiterated China's suggestion for reducing tensions on the Korean Peninsula – the "double suspension" and dual-track approaches. China proposes that the DPRK should suspend its missile and nuclear activities in exchange for a halting of large-scale military exercises by the US and South Korea. Then relevant parties could follow the dual-track approach of denuclearizing the peninsula on the one hand and establishing a peace mechanism on the other.
She urged the parties to address each other's concerns "in a synchronized and reciprocal manner." 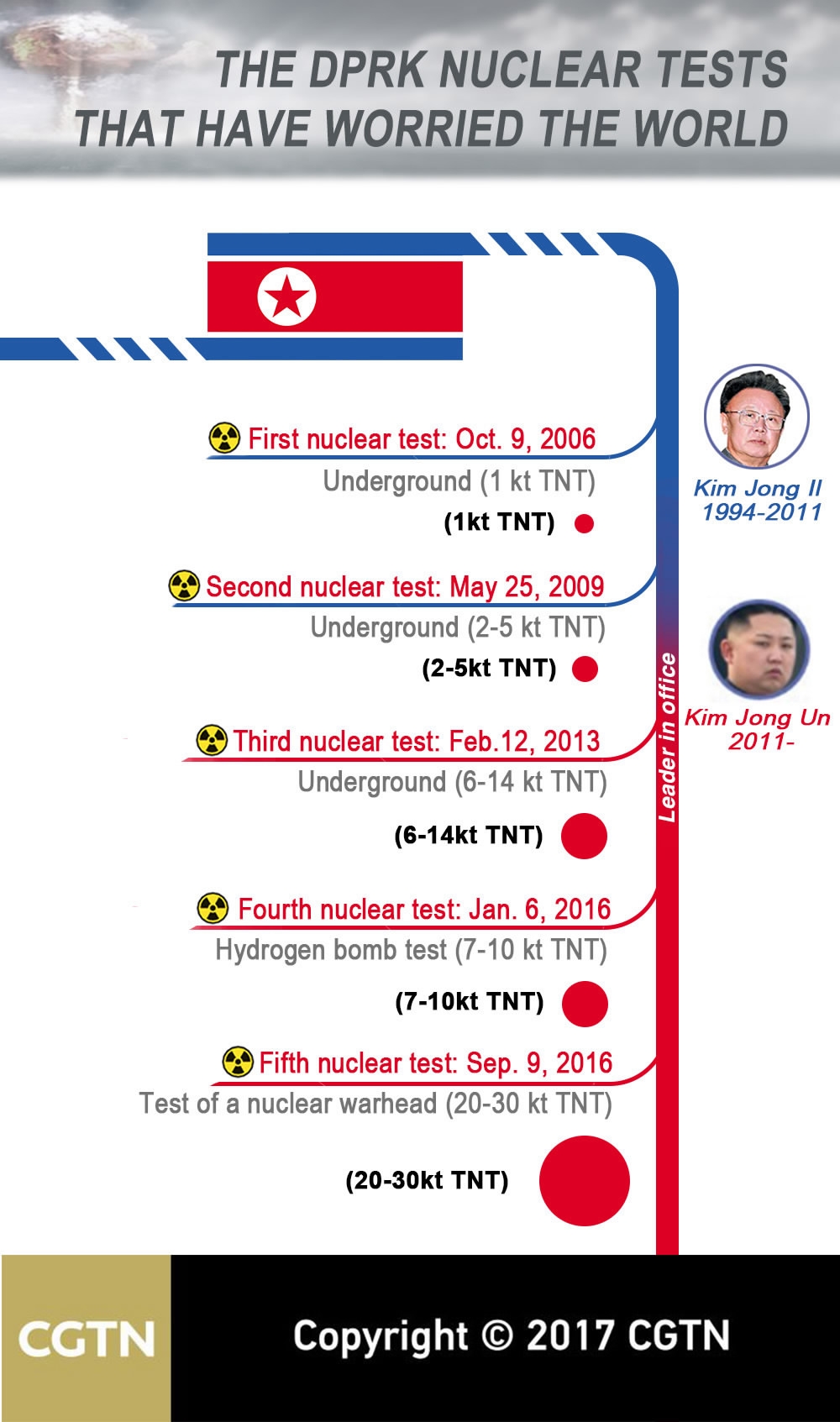 The DPRK has conducted five nuclear tests. /CGTN Graphic
'China has no leverage'
While reaffirming China's commitment to a nuclear-free Korean Peninsula, Fu emphasized that the country cannot make the DPRK stop its nuclear weapons program.
China has been working hard to play its role both as a mediator and a party to UN sanctions, but it does not have the leverage to force either the US or the DPRK to address each other's concerns, she stressed.
Fu explained the DPRK sees the US as the source of threats to its security and that China does not hold the key to its security concerns. 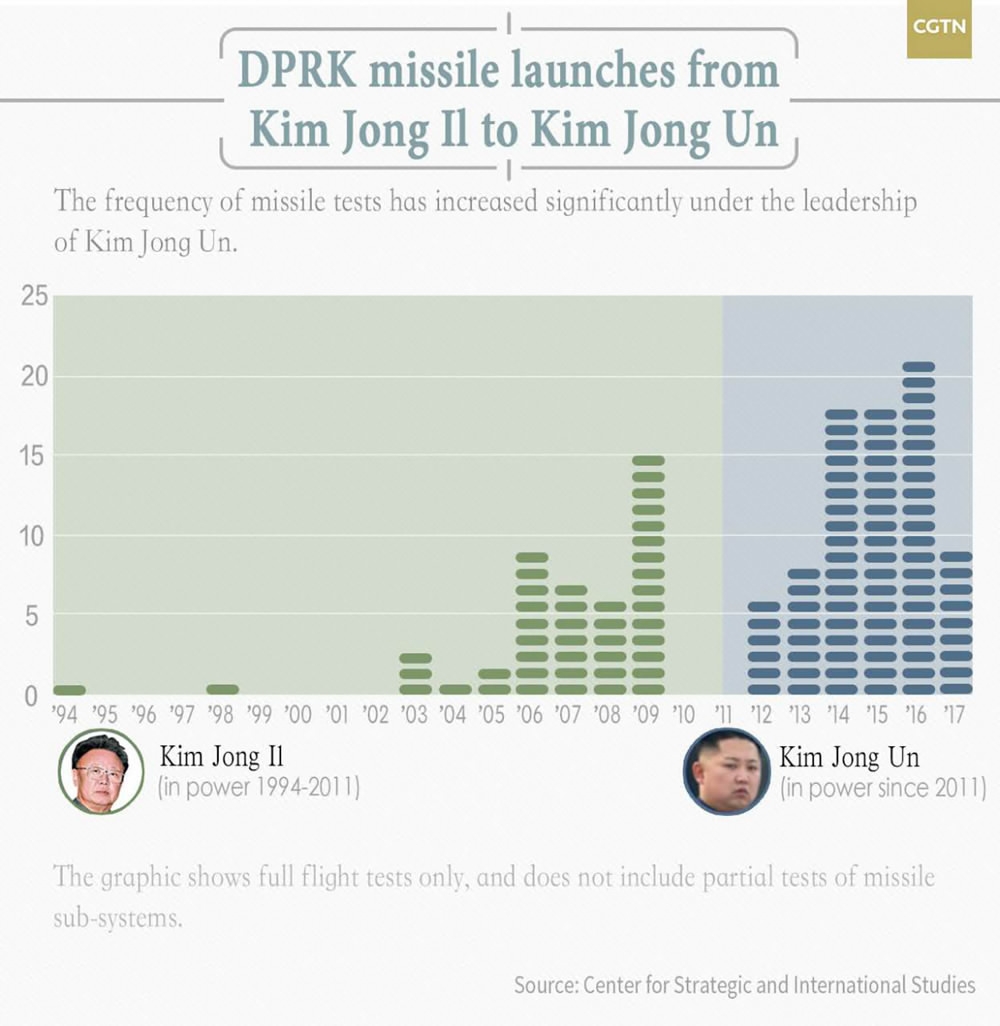 The frequency of the DPRK's missile tests has increased significantly under the leadership of Kim Jong Un. /CGTN Graphic
Revisiting the recent history of the DPRK's nuclear issue, she said the DPRK "lost its main backer" and "felt extremely insecure" with the decline and disintegration of the USSR in early 1990s, while South Korea maintained rapid economic growth over a number of years. The DPRK, after failed negotiations with successive US administrations, is determined to possess nuclear weapons to ensure its security.
China has firmly requested that the DPRK stops its nuclear weapons development program, while requesting the US addresses the DPRK's 'legitimate security concerns,' she said.
Fu previously served as China's ambassador to the Philippines, Australia and the UK and as vice minister of Foreign Affairs.
Related stories:
Trump would be 'honored' to meet Kim Jong Un under right circumstances
Trump: President Xi won't be happy with DPRK nuclear test
Chinese and UK foreign ministers urge peaceful solution to Korean Peninsula issue
US aircraft carrier Carl Vinson conducts war drill with S. Korean Navy
Copyright © 2017