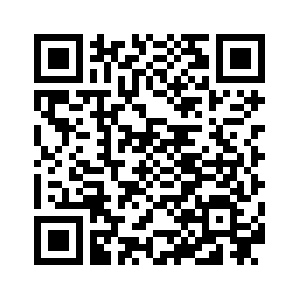 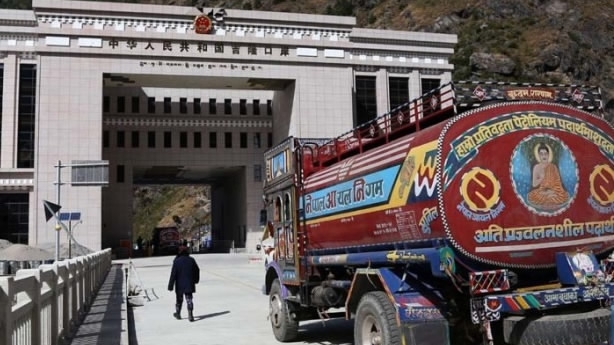 Nepal is rapidly embracing the China-proposed Belt and Road Initiative (BRI) as the land-locked South Asian nation seeks to reduce its economic dependence on India while expanding its trade ties and connectivity with China.
A little over six months after Nepal and China signed a Memorandum of Understanding (MoU) on BRI in Kathmandu this May, Nepalese officials on Sunday identified three potential infrastructure projects to be implemented under the China-backed initiative.
The projects include a cross-border railway line connecting China's border town Kerung with Nepal's capital Kathmandu; electricity transmission line connecting Kerung with Nepal's Galchhi in Dhading district near the capital; and the Sunsari-Marin Diversion Irrigation Project in eastern Nepal, according to a press statement by Nepal's Finance Ministry. 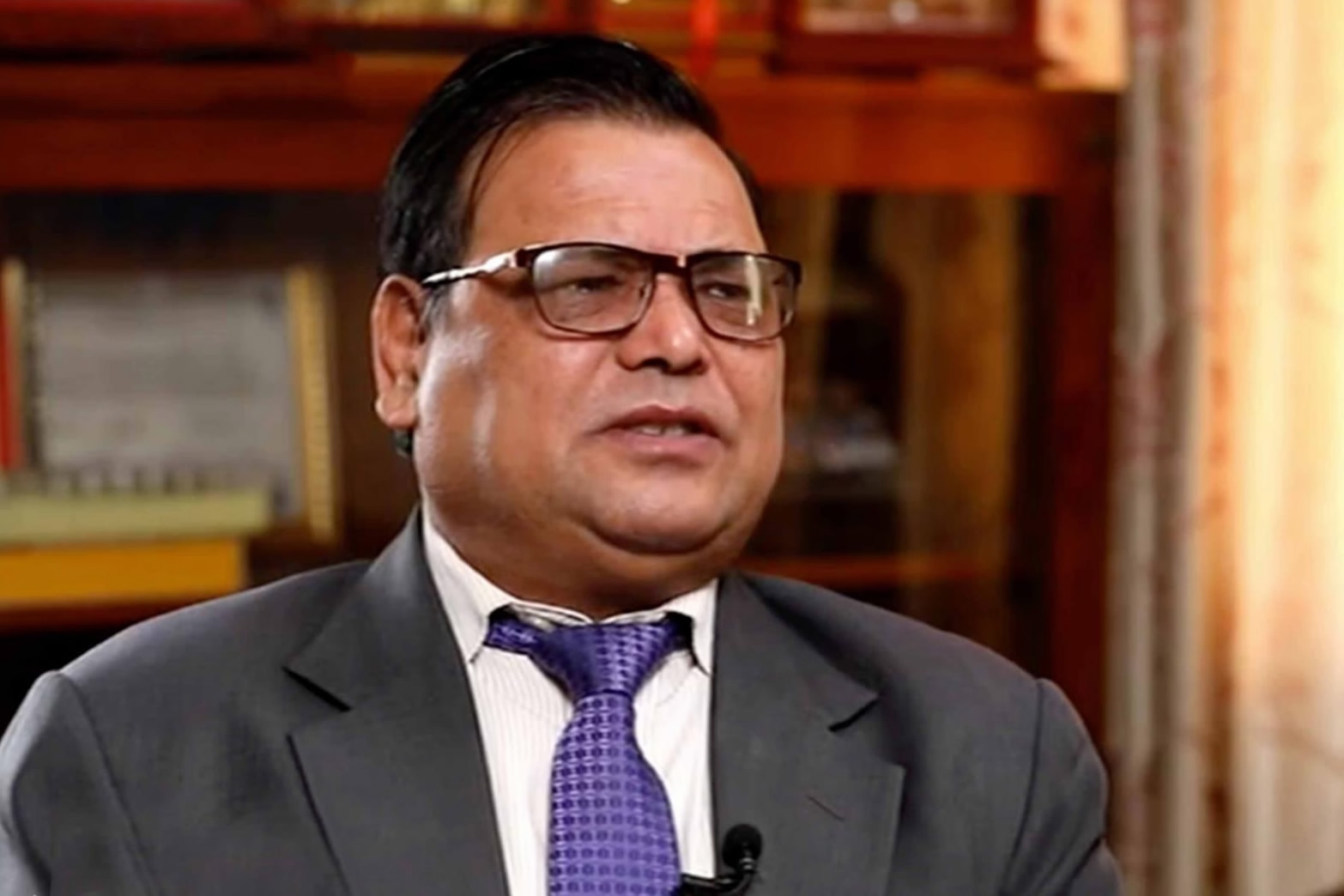 During a meeting of the Project Development and Facilitation Committee to implement the MoU, officials from ministries including finance, physical infrastructure and transport, energy, irrigation, urban development, agriculture and tourism discussed the projects.
"Although we have identified these as potential projects to be implemented under the Belt and Road Initiative, we have not finalized them yet," Yugraj Pandey, undersecretary at Nepal's Ministry of Finance, told Xinhua on Sunday.
At the meeting, finance secretary Shankar Prasad Adhikari urged officials from other ministries to submit the potential projects which are ready for implementation within the next five days, Xinhua reported.
"A consensus reached among the officials is that the Finance Ministry will propose the projects to the Chinese government based on national priority and necessity of the country," the ministry said in the statement.
Also at the meeting, Economic Adviser to Nepali Prime Minister Gyan Chandra Acharya urged the ministries to propose projects that could promote connectivity with productivity so as to reap maximum benefit from the initiative. 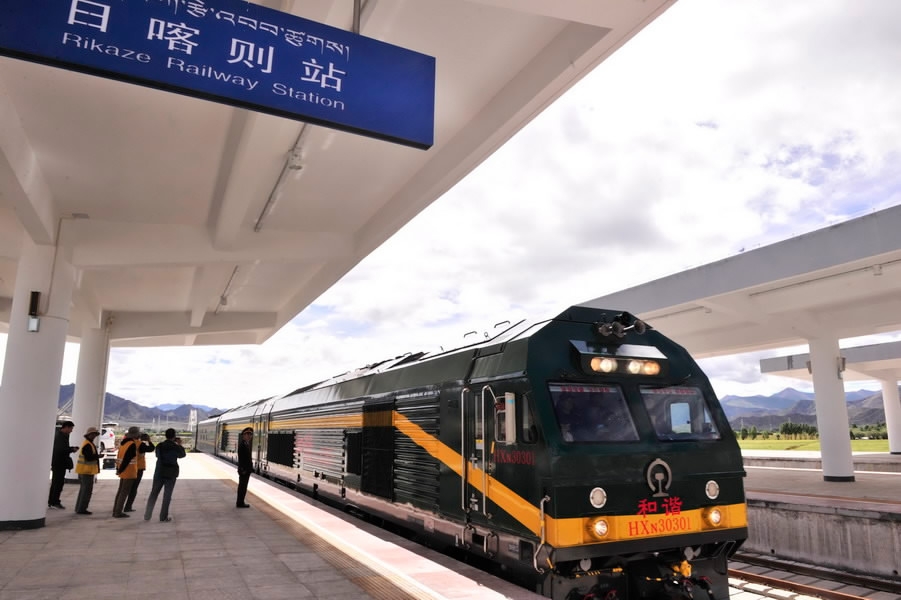 The construction of a trans-Himalayan railway link was made official in September this year when Nepalese leader Krishna Bahadur Mahara visited Beijing as the country’s Deputy Prime Minister and Foreign Minister (He now serves as a minister without portfolio in the current government with an election underway voting for Nepal’s new government). The plan envisions the current Lhasa-Shigatse railway line in China’s Tibet Autonomous Region to be extended to Kathmandu via Kerung.
Following talks with Mahara, Chinese Foreign Minister Wang Yi said the construction of a cross-border Sino-Nepali railway is a strategic cooperation plan raised jointly by leaders from both nations.
"BRI is a great initiative taken by Chinese President Xi Jinping for the economic growth of the world," Mahara told CGTN’s Pan Deng in a recent interview. "Mostly, I want to connect with China in transport, especially rail," Mahara said, emphasizing the initiative's contribution to transport and trade.
"So far as the railway link is concerned, it is of very high priority for Nepal," the country’s Infrastructure Minister Bir Bahadur Balayar told CGTN’s Pan Deng earlier on Sunday. "We have proposed in this initiative a link between Shigatse and Kathmandu and [possibly] Lumbini via Kerung," he added.
Besides the rail line, Nepal is also keen on reviving the cross-border road link, Balayar told CGTN. "As you know long back the government of China has helped us to connect with the Chinese border... The road through the bordering town of Khasa at the moment is not operational. We are keen on getting it operational so that it can always remain an alternative route to Kerung," he said.
In addition, "we are looking forward to have an operational link between Kerung and Kathmandu through a tunnel road which is being already proposed under this initiative (BRI)," Balayar added. 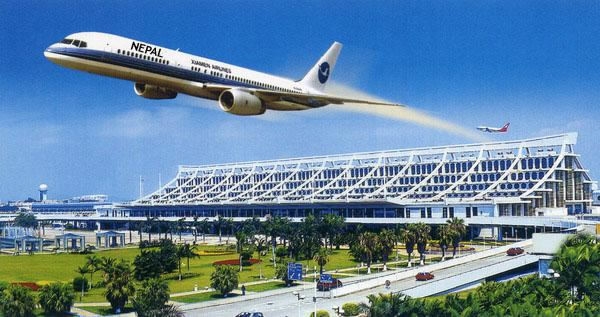 An artist's impression of the new international airport under construction in Pokhara, Nepal, with Chinese assistance. /Xinhua Photo

An artist's impression of the new international airport under construction in Pokhara, Nepal, with Chinese assistance. /Xinhua Photo

The Nepalese Infrastructure Minister also highlighted the assistance the South Asian nation is getting from China in the aviation sector. "We are in the process of converting the airports at Pokhara, Bhairahawa, Nijgadh and Dhangadi into international airports. The Chinese contractors have already started construction of Pokhara and Bhairahawa airports," said Balayar
Construction of the new airport in Nepal's second largest city Pokhara started in August this year. The project will cost about 1.5 billion yuan (225 million US dollars) and be completed in about four years, according to media reports.
"The project is scheduled to be completed by July 10, 2021 as per the contract signed between the project office and Chinese contractor - China CAMC Engineering Co. Ltd which had bagged the contract in May 2014," Xinhua reported.
The Bhairahawa airport project, however, has been mired in controversies. A dispute over payments between the Chinese contractor Northwest Civil Aviation Airport Construction Group and the Nepali sub-contractor Northwest Infra Nepal led to work getting stalled for months since March. This was followed by the Nepalese government in September warning the Chinese contractor with a "notice of termination" of contract for lack of progress.
However, a timely action by the Chinese firm eventually saw the government retaining the deal in October. As of now it seems that work is back on track.
"The government has decided to retain the Chinese contractor for Gautam Buddha Airport in Bhairahawa as the company has started to show satisfactory progress," reported Kathmandu Post. Project chief Om Sharma said the Chinese contractor had fulfilled all the requirements set by the project. "Its commitment shows it can expedite work as per the terms and conditions set by the project," he told the Post. 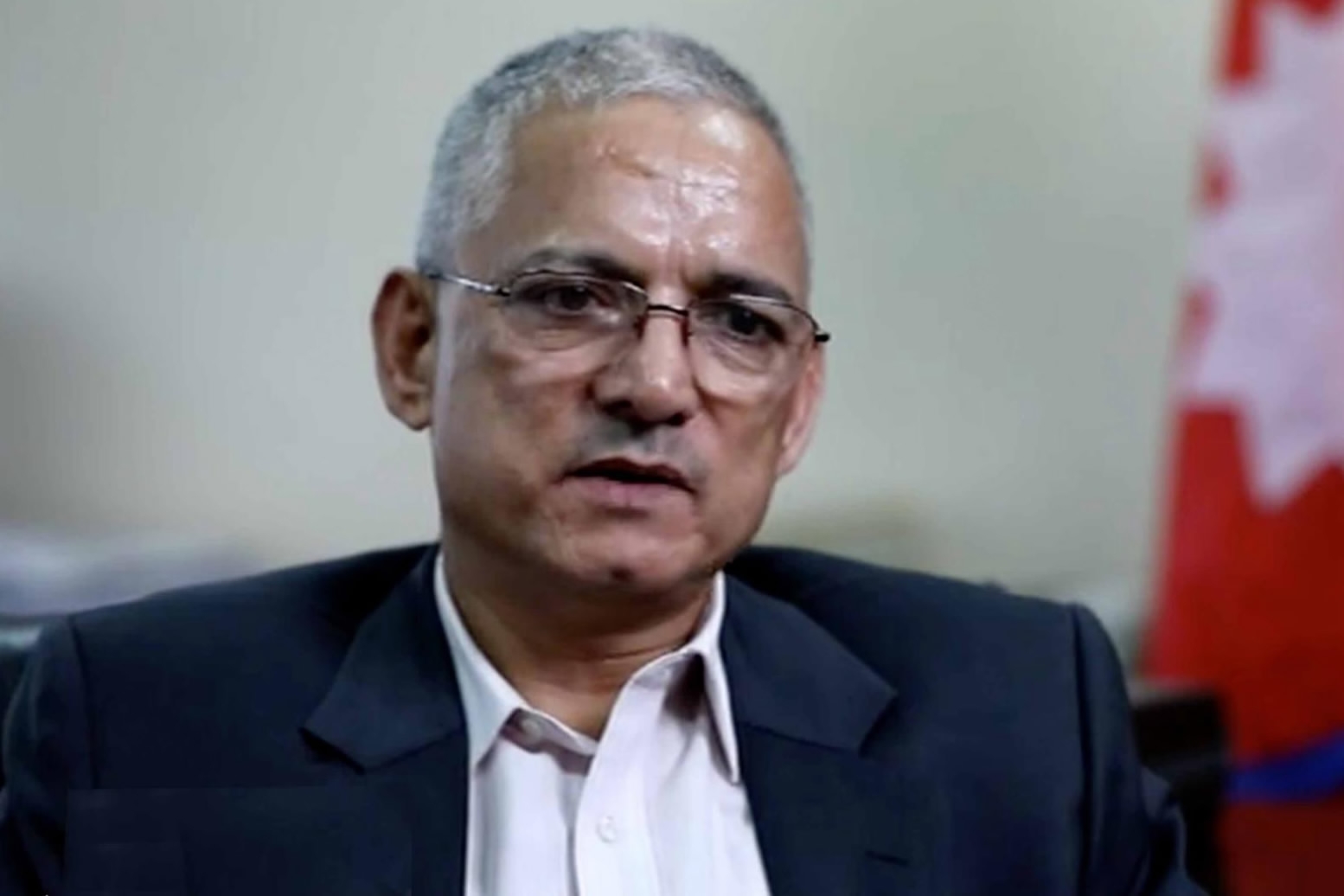 A screen grab of Infrastructure Minister Bir Bahadur Balayar during his interview with CGTN. /CGTN Photo

A screen grab of Infrastructure Minister Bir Bahadur Balayar during his interview with CGTN. /CGTN Photo

The rail, road and air network being developed under BRI is widely seen as a possible alternative gateway for Nepali access to China, Central Asia and Eastern Europe.
Land-locked between two major emerging powers of China, to its north, and India, to its south, Nepal has not been able to fully realize its potential due to infrastructural clogs across its southern border, including lack of road, rail, and port facilities.
Balayar stressed that the connectivity that BRI projects would offer, including the access to Chinese ports to transit goods for Nepal, would be the biggest advantage for his country.
"This is what would be one of the beauties of the BRI... This trade and transit treaty is going to make Nepal able to use the Chinese ports… The connection through the Chinese ports would be one of the biggest benefits for Nepal. This would lead to a substantial increase in trade between the two countries," he elaborated.
For most of its history, Nepal has depended on India to trade with the rest of the world. However, the Himalayan nation has increasingly turned towards its northern neighbor to lessen its reliance on one country. Besides the planned transport corridors through rail, road and air connectivity, Chinese firms have also pitched in to provide Internet access to Nepal since August this year. The move broke the monopoly of India’s telecom providers in Nepal’s Internet sector.
While the increasing Chinese influence in Nepal has prompted media speculation about its changing equation with India, with which it shares millennia-old cultural ties; both Beijing and Kathmandu remain unfettered and positive about their growing ties. 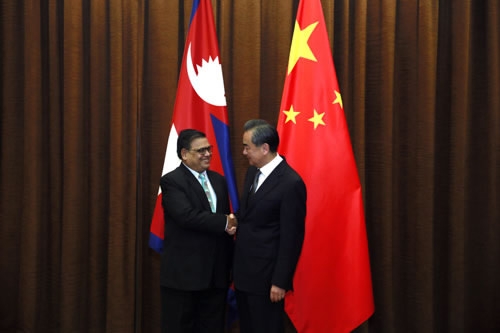 The Chinese Foreign Minister in a joint press briefing with Mahara this September emphasized that being located between the two major countries of China and India, Nepal is able to serve as the bridge and tie linking the two major emerging economies.
"As the common neighbors of Nepal, China and India should have great mind and sense of responsibility of a major country, respect Nepal’s legitimate rights and interests, support the independence of Nepal and help to advance Nepal’s development," a Chinese Foreign Ministry statement quoted Wang as saying.
"It is believed that Nepal could develop its relations with the two major adjacent countries in parallel without conflicts. China expects to create conditions step by step to explore on the construction of China-India Economic Corridor and jointly promote the Himalayan region to become a new highland for Asia’s development," Wang added. 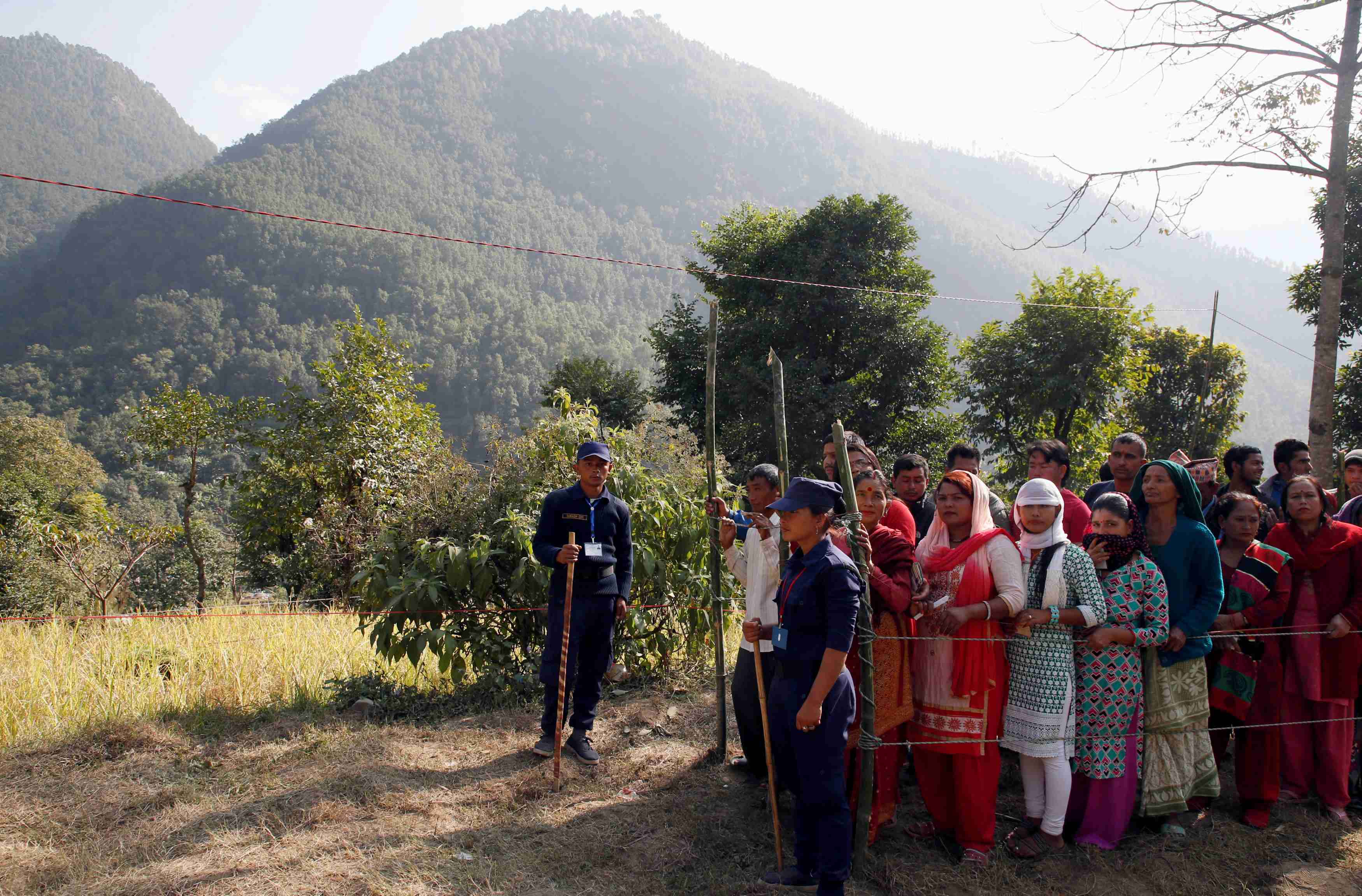 Villagers wait in a queue to cast their votes at a polling station during the parliamentary and provincial elections in Sindhupalchok District, Nepal, on November 26, 2017. /Reuters Photo

Villagers wait in a queue to cast their votes at a polling station during the parliamentary and provincial elections in Sindhupalchok District, Nepal, on November 26, 2017. /Reuters Photo

Nepal is going through an election and will have a new government by year end. The first round of voting to elect Nepal's parliament and the provincial assemblies were held on Sunday in the country's northern 32 mountainous and hilly districts in the first phase. Another round will take place on December 7 in the remaining 45 districts of southern plain and hilly districts.
While the current establishment has shown strong commitment to BRI, China will be watching what path does the new government take.
"There will be no change in BRI policy by the changing political situation in Nepal. The election will consolidate Nepal politically. After the elections, a stable government will be formed and BRI projects will see fast progress," assured Mahara.
Asked whether the difference in political systems and cultures between China and Nepal will have any impact on long-term ties, Balayar told CGTN: "Both the countries have very high regard for each other and therefor political or cultural differences do not play much of a role in determining our bilateral ties."
"Nepal strongly supports the one-China policy and we are determined that future cultural exchanges would strengthen our people-to-people relations leading to a positive impact on our socio-economic development," he said.
(With input from agencies)
Top photo - Fuel tankers of Nepal Oil Corporation (NOC) head to Chinese city Kerung to receive petrol assisted by Chinese government, in Rasuwa, Nepal, October 31, 2015. /Xinhua Photo
3159km