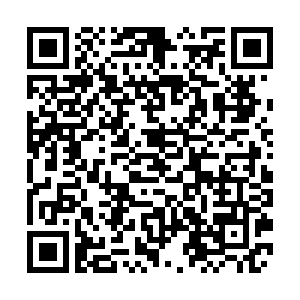 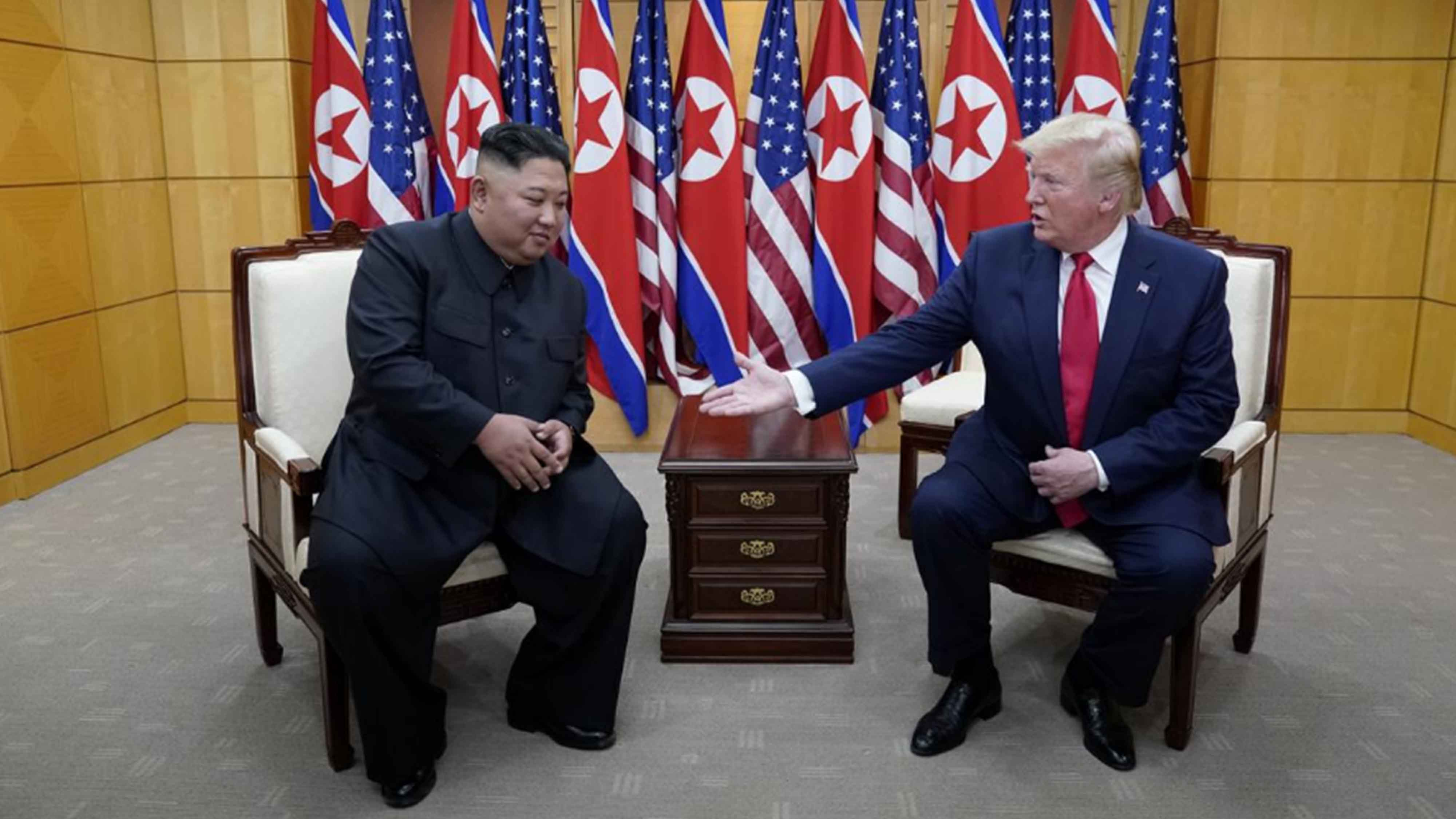 The impromptu meeting in the DMZ – which came after Trump issued an invitation on Twitter on Saturday – took place with negotiations between Pyongyang and Washington over the DPRK's nuclear arsenal at a deadlock.

Trump and Kim made a historic handshake, standing on either of the inter-Korean military demarcation line (MDL) that had for years represented a tense Cold War border when the 1950-53 Korean War ended with a ceasefire rather than a peace treaty.

Together with Kim, Trump walked across the MDL into the DPRK side of Panmunjom, becoming the first sitting U.S. president to set foot in the country.

Moments later, they returned to the Republic of Korea (ROK) side and joined President Moon Jae-in for a brief chat, marking an unprecedented three-way gathering. Trump and Kim then held a bilateral closed-door meeting. 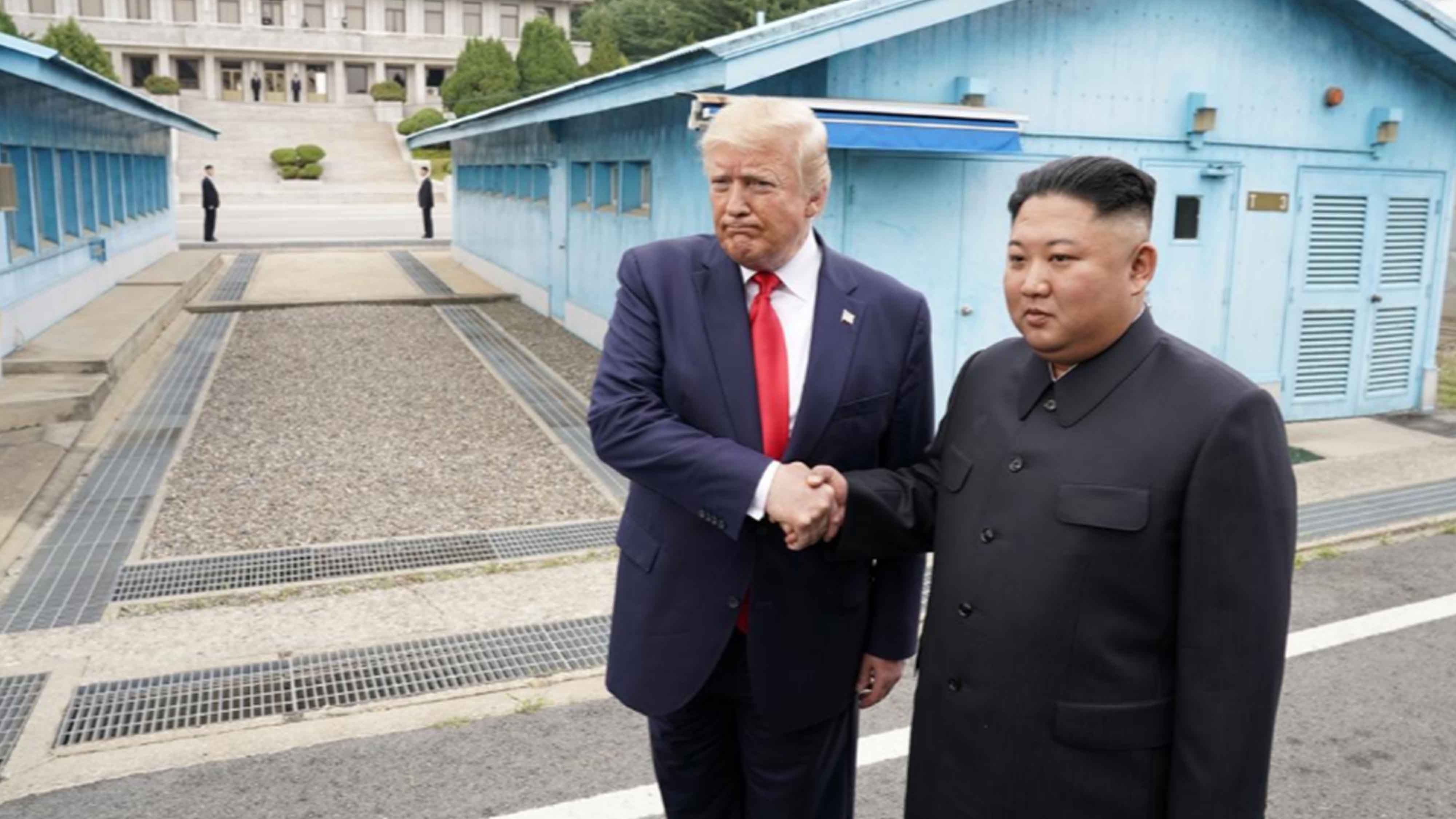 Trump, Kim invite each other for a visit

"It's a great day for the world," Trump said as he and Kim stood together amid a throng of press photographers, aides and bodyguards. He told Kim he was "proud to step over the line" dividing the Korean Peninsular.

Kim looked relaxed and happy as he chatted with Trump. "This is an expression of his willingness to eliminate all the unfortunate past and open a new future," Kim said, adding that the handshake was an "expression that today is different from yesterday."

He noted that his "wonderful" relationship with Trump would enable the two longtime enemies to get over obstructions, with their nuclear talks at a stalemate.

"I am convinced our relationship will enable us to overcome barriers standing in the way," said Kim.

Kim said it would be a great honor if Trump visited his capital of Pyongyang.

Trump also said he had invited Kim to the White House, adding that teams from the U.S. and DPRK would start working-level talks "over the next two or three weeks" on Pyongyang's nuclear program. "Anytime he wants to do it. I think we want to take this down to the next step, let's see what happens," said Trump. 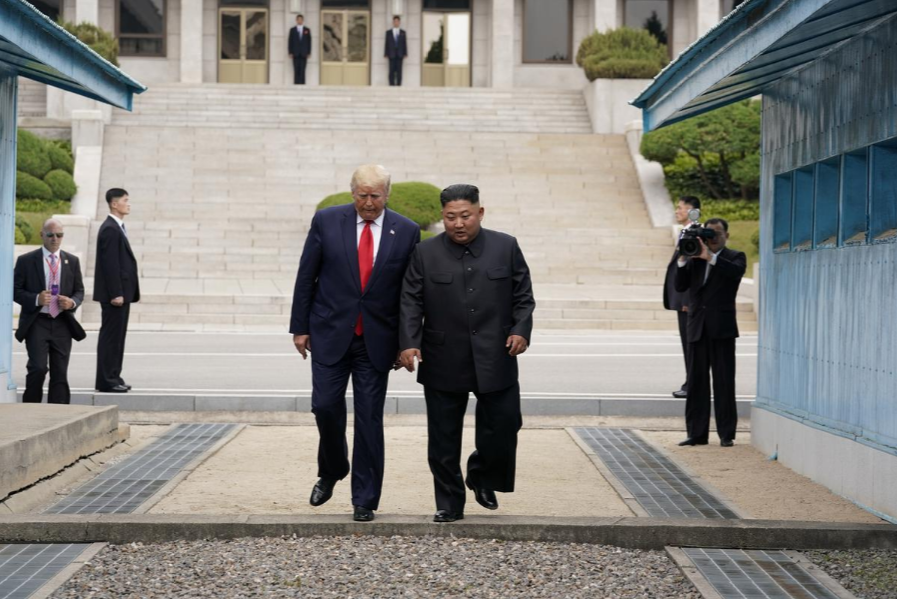 It was the third meeting between the two leaders in just over a year and will raise hopes for a revival of stalled nuclear talks.

Their first summit took place in a blaze of publicity in Singapore last year but produced a vaguely-worded pledge about denuclearization, and a second meeting in the Vietnamese city of Hanoi in February intended to put flesh on those bones broke up without agreement.

Contact between the two sides has since been minimal – with Pyongyang issuing frequent criticisms of the U.S. position – but the two leaders have exchanged a series of letters and Trump turned to Twitter on Saturday to issue his offer.

Could an 'excellent letter' lead to a third Kim-Trump summit?

"If Chairman Kim of North Korea (DPRK) sees this, I would meet him at the Border/DMZ just to shake his hand and say Hello(?)!" Trump wrote from Osaka, Japan, where he was attending a G20 summit before flying to Seoul.

Trump's entry onto DPRK soil is a dramatic re-enactment of the extraordinary scene last year when Kim and Moon met in the "truce village" of Panmunjom within the DMZ and walked over the MDL.

Moon – who seized on last year's Winter Olympics to broker the process between Pyongyang and Washington, after tensions soared in 2017 amid missile and nuclear tests and mutual insults – began a summit with Trump in the ROK capital, Seoul, ahead of their trip to the DMZ.

A glance at Panmunjom: Talks between the two Koreas

Moon Jae-in – the middle-man between Kim and Trump

But analysts cast doubt over the headline-grabbing meeting's potential impact on the underlying issues.

The second Kim-Trump meeting floundered in Hanoi amid disagreements on what the DPRK – which has carried out six nuclear tests and developed missiles capable in violation of UN Security Council resolutions – would be willing to give up in exchange for relief from sanctions that have crippled its economy since its first nuclear test in 2006.

Teng Jianqun, an expert at the China Institute of International Studies, told CGTN that voices of opposition coming from the U.S. and the ROK cast doubt on the decision to further engage the DPRK without lifting the existing UN sanctions imposed against the country.

Teng said the purpose of Trump's visit to the DMZ was more about showcasing the U.S. power in Asian geopolitics rather the denuclearization of the Korean Peninsula.