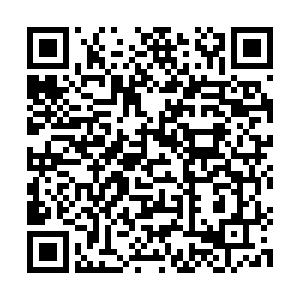 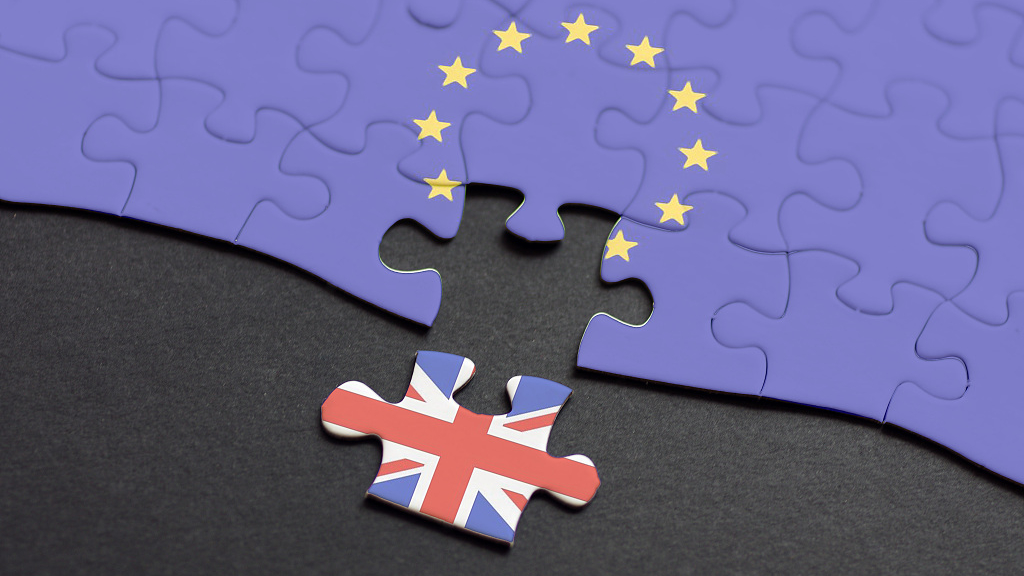 Editor's note: John Ross is a senior fellow at the Chongyang Institute for Financial Studies of the Renmin University of China. He is a former director of economic and business policy for the mayor of London. The following is part one of his article "Brexit explains why Britain has played such a provocative role in Hong Kong." The article reflects the author's opinions, and not necessarily the views of CGTN.

On July  24, Britain announced that Boris Johnson became its new prime minister. This event has significant implications for China - including Hong Kong and Huawei. Johnson's project is to turn Britain into the equivalent of the 51st state of the U.S. – but without the right to vote. Therefore, it is necessary to stress this and see clearly what is taking place and its implications for China. In particular, the international forces involved make it clear why Britain has played such a provocative role in recent events in Hong Kong.

A specific feature of the present provocations in Hong Kong is clearly the role played by Britain, which has made a series of statements attempting to interfere in Hong Kong affairs, in contradiction to the 1997 ending of Britain's colonial rule and return of Hong Kong to China. The Chinese ambassador in London and the Chinese Foreign Ministry in Beijing have strongly replied to these.

It is clear a certain division of labor has been created in attacks on China with the U.S. concentrating on the trade war and Britain playing a particularly provocative role concerning Hong Kong. But, as will be seen, this facade conceals the reality. Britain's provocative policy is carried out by forces increasingly aligned with the U.S. It is not a difference in substance but merely a technical division of labor.

This present provocative role by Britain is particularly striking because it forms a sharp contrast to the "golden period" of China-UK relations when Cameron was British prime minister, only a few years ago.  At that time, not only Britain became the first G7 country to join the Asian Infrastructure Investment Bank (AIIB) despite U.S. opposition, but was also in line with the 1997 settlement, largely refraining from provocative intervention in Hong Kong. Cameron's development of the "golden period" of China-UK relations was directly tied to the fact that he represented that wing of British business which strongly supported Britain's membership of the EU and he was a fierce opponent of Brexit. Within that framework, Cameron developed what was a highly rational strategy positioning Britain as the key gateway for China into the EU. 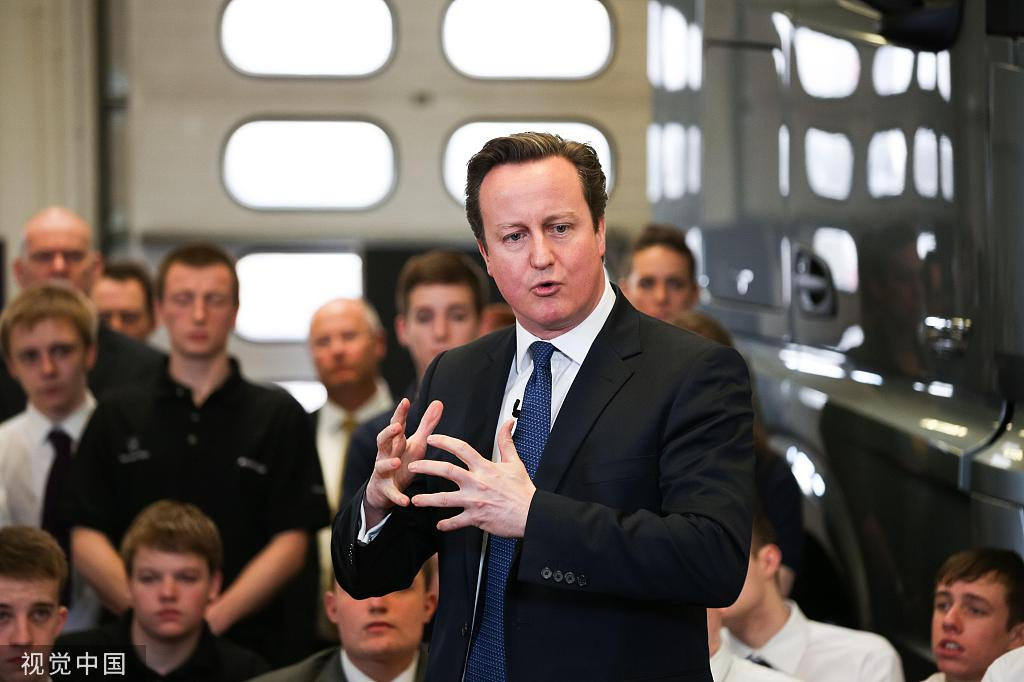 Britain had great advantages in pursuing Cameron's strategy. It is the world's largest center for foreign exchange dealing, ahead of New York, it has established the largest market for RMB trading outside China, and it is much easier for many Chinese firms to operate than in other European countries. During the eight years, I was in charge of London's economic policy, from 2000 to 2008, I had numerous meetings with financial companies of London and therefore personally knew how important relations with China were for them. A single anecdote sums this up – it was a joke among some business circles in the City of London that it was very unfortunate that the Chinese Spring Festival was so close in time to the European Christmas, because after attending many dinners to mark that holiday, then they had to attend many more to celebrate the Spring Festival and therefore it was impossible to control weight at that time of the year.

Cameron's strategy was, therefore, extremely economically rational for British capitalism and Britain's economic development. A real "win-win" outcome for both Britain and China was achieved eventually.

But to pursue such a strategy Cameron evidently needed calm and objective relations with China. This is the explanation of why during the "golden period" Cameron clearly tried to avoid becoming involved in provocations in Hong Kong. 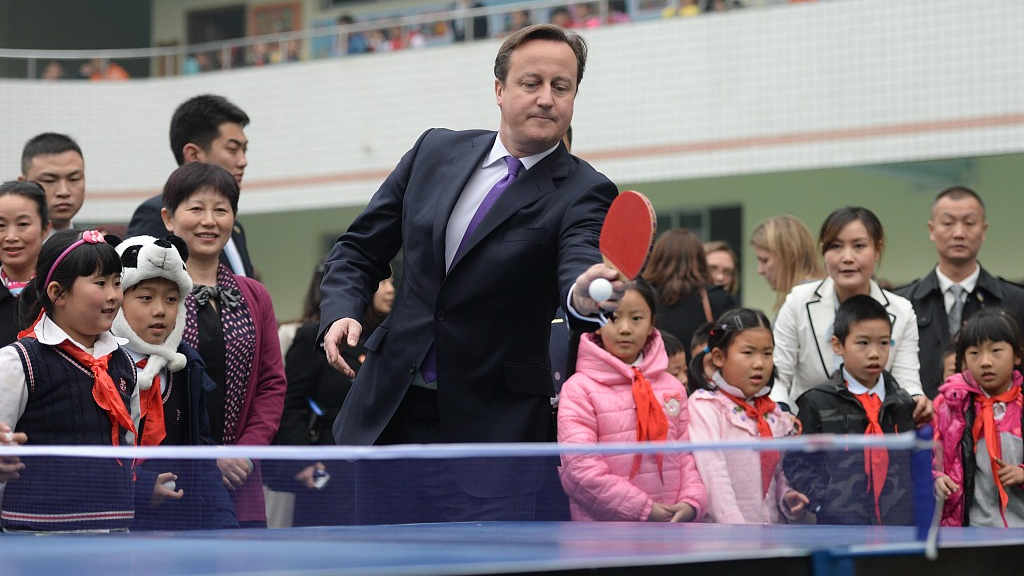 David Cameron playing ping-pong with Chinese student during his visit to China in 2013. /VCG Photo

David Cameron playing ping-pong with Chinese student during his visit to China in 2013. /VCG Photo

The U.S. against Cameron

But Cameron's economic policy with China was totally unacceptable to those in the U.S. who wanted to block China's development. This explains why the U.S. strongly opposed Britain joining the AIIB.

The U.S. opportunity to comprehensively disrupt Britain's good relations with China came with Brexit and the key role of Boris Johnson within this, which has culminated in him becoming prime minister.

The historical position of the U.S. in regard to Britain's membership of the EU had been to support – as Britain was seen as a reliable U.S. ally to influence EU policy. But Trump reversed this policy. Instead, it favors disrupting the EU and he forged close personal links with anti-EU forces in Britain.

This change of U.S. necessarily followed from Trump overall international strategy. The policy of Obama and Hilary Clinton had been to seek a broad "anti-China alliance" and to achieve this the U.S. had to make concessions to its allies, which included good relations with the EU.

Trump, however, considered the U.S. could not afford such concessions. Instead, allies should be forced to increase the resources they supplied to the U.S. so that the U.S. would be strengthened in its confrontation with China.

Because Germany was unwilling to transfer its resources to the U.S., through increased defense spending and acceptance of U.S. tariffs, Trump concluded that Brexit must be pursued to weaken the EU. Support for Brexit was therefore integrally linked to Trump's strategy to attack on China. To pursue this strategy Trump created close relations with Brexit supporters in Britain – the first British politician to meet Trump after his election as president was not from the governing Conservative Party but Nigel Farage, who is now leader of the Brexit Party.

Boris Johnson links to the U.S.

Boris Johnson fitted perfectly into Trump's strategy. Johnson was born in the U.S. and was a U.S. citizen, as well as British citizen, until 2016 – although Johnson pursued his political career in Britain. Johnson's policy was of strong subordination to the U.S. – being, for example, a firm supporter of the Iraq invasion .

Johnson was also ultra-derogatory about Chinese civilization. "High Chinese culture and art are almost all imitative of western forms …The number of Chinese Nobel prizes won on home turf is zero, though there are of course legions of bright Chinese trying to escape to Stanford and Caltech," he said.

"There are Chinatowns and takeaways all over the world, but in Britain the culinary impact of China is dwarfed by the [Indian] subcontinent…. It is hard to think of a single Chinese sport at the Olympics, compared with the umpteen invented by Britain, including ping-pong [table tennis], I'll have you know, which originated at [British] upper-class dinner tables…"

Someone who was a firm supporter of the U.S. and was derogatory about China, was, of course, an ideal candidate for Trump – who therefore duly went out of his way to publicly praise Johnson.

Brexit explains why Britain has played such a provocative role in Hong Kong, part 2

Brexit explains why Britain has played such a provocative role in Hong Kong, part 3