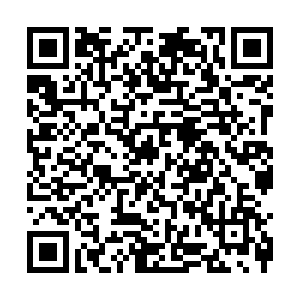 Russian President Vladimir Putin hosts his 15th annual press conference on Thursday (December 19) in Moscow. This is one of the few chances for foreign media to directly ask the Russian president a question.

Since 2001, Putin has fielded questions for hours from hundreds of journalists from Russia and abroad on a variety of topics, ranging from nuclear weapons to the president's personal issues, such as Putin's marriage plans.

However, the most common question is: how long will this year's press conference last?

The shortest conference – the first one in 2001 – lasted 93 minutes. Then the event got longer and longer, until the record was set in 2008's year-end conference, which last four hours and 40 minutes. 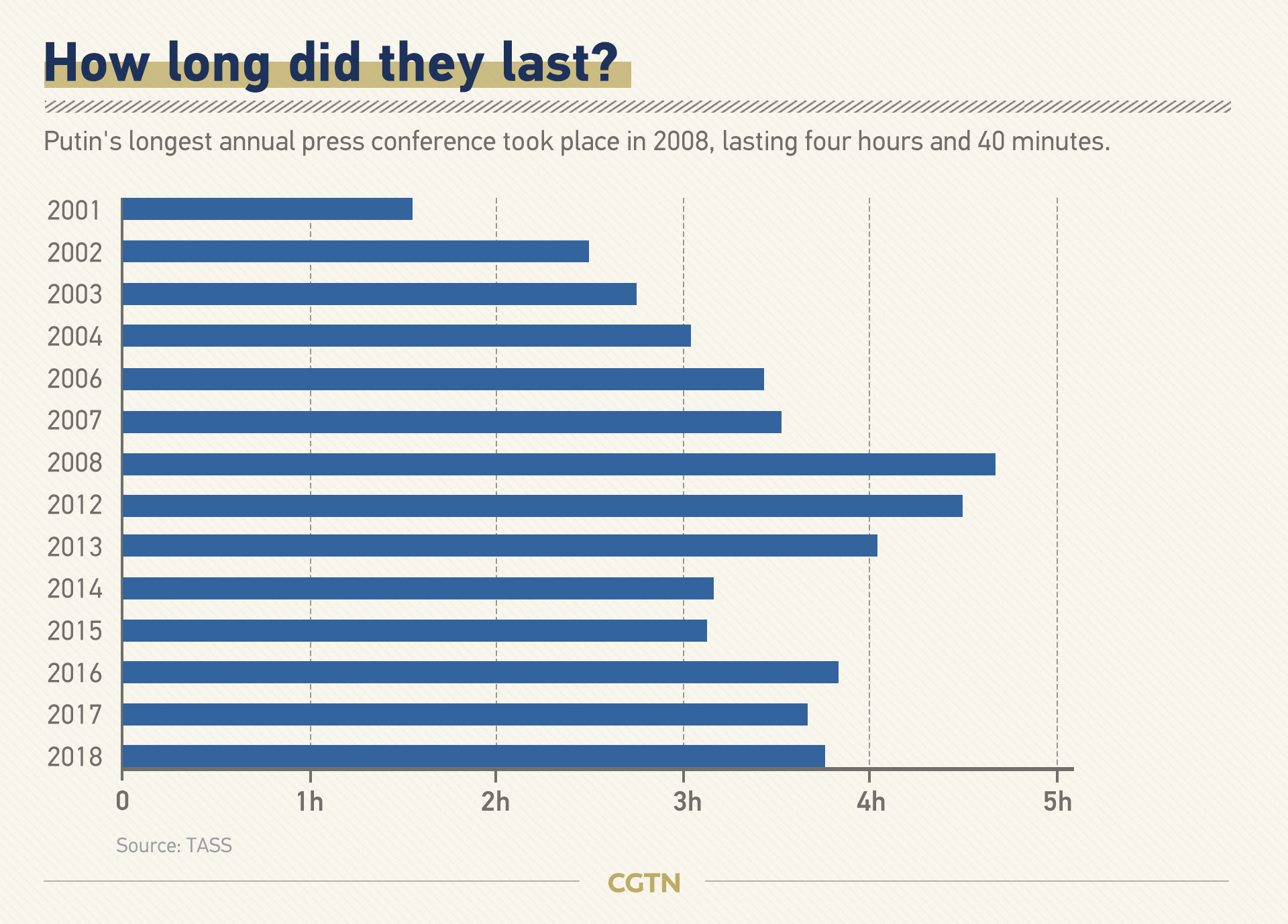 It is up to Putin to decide when to stop the annual event. Since 2004, they have lasted at least three hours.

But the marathon event doesn't guarantee that everyone gets to ask a question. Instead, just a minority of journalists get their questions heard, as the number of attendees packed in the venue grows every year.

At least 1,000 journalists have been in attendance every year since 2006. 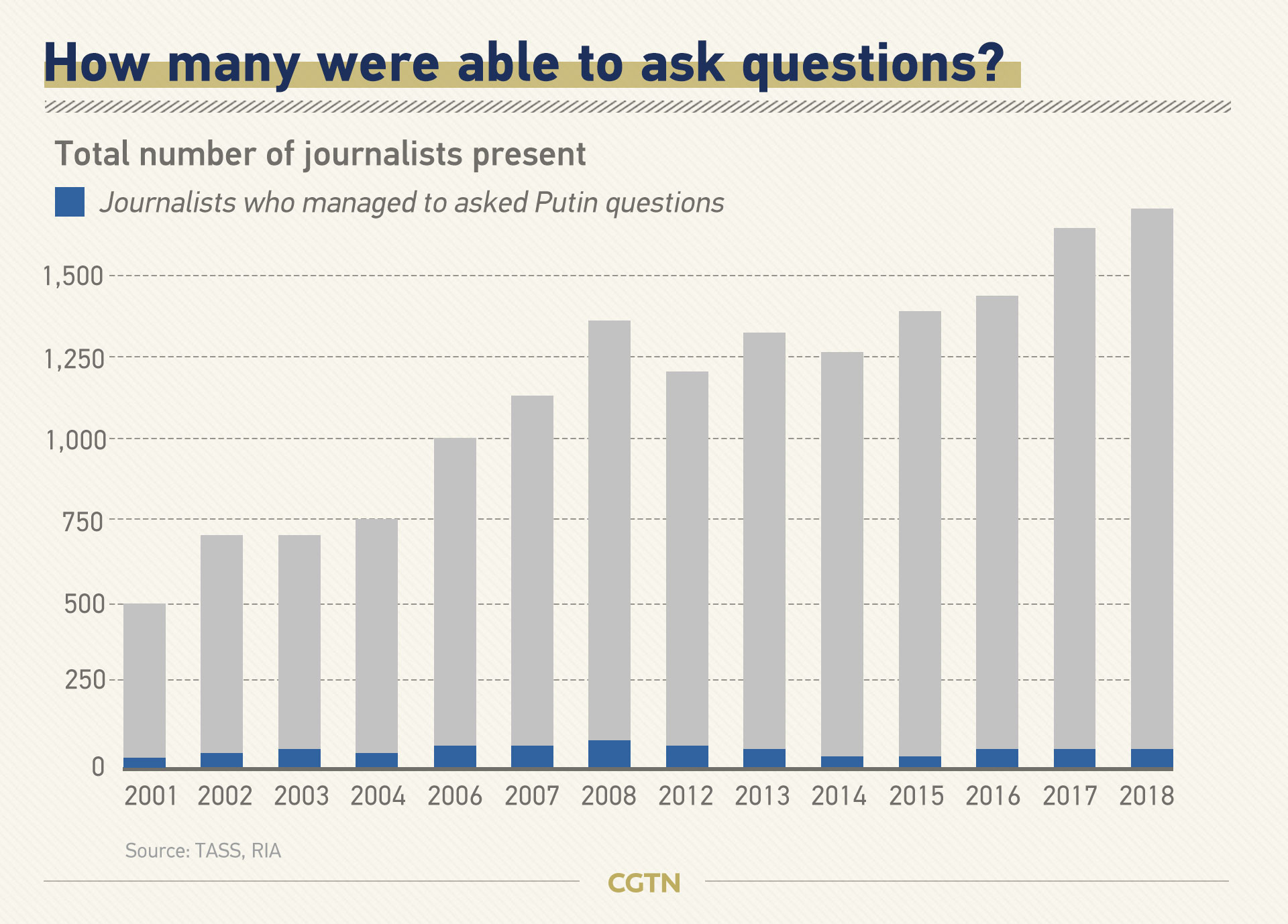 To get their voices heard, journalists hold up banners or even sometimes dress in weird costumes in the hope of attracting Putin's attention, and, with it, the chance to ask a question.

A record-breaking number of journalists – 1,895 – have been accredited to this year's Q&A conference, according to a list released by the Kremlin several days ago.

In this marathon event, Putin often addresses the economy, as well as issues of regional and international concern. 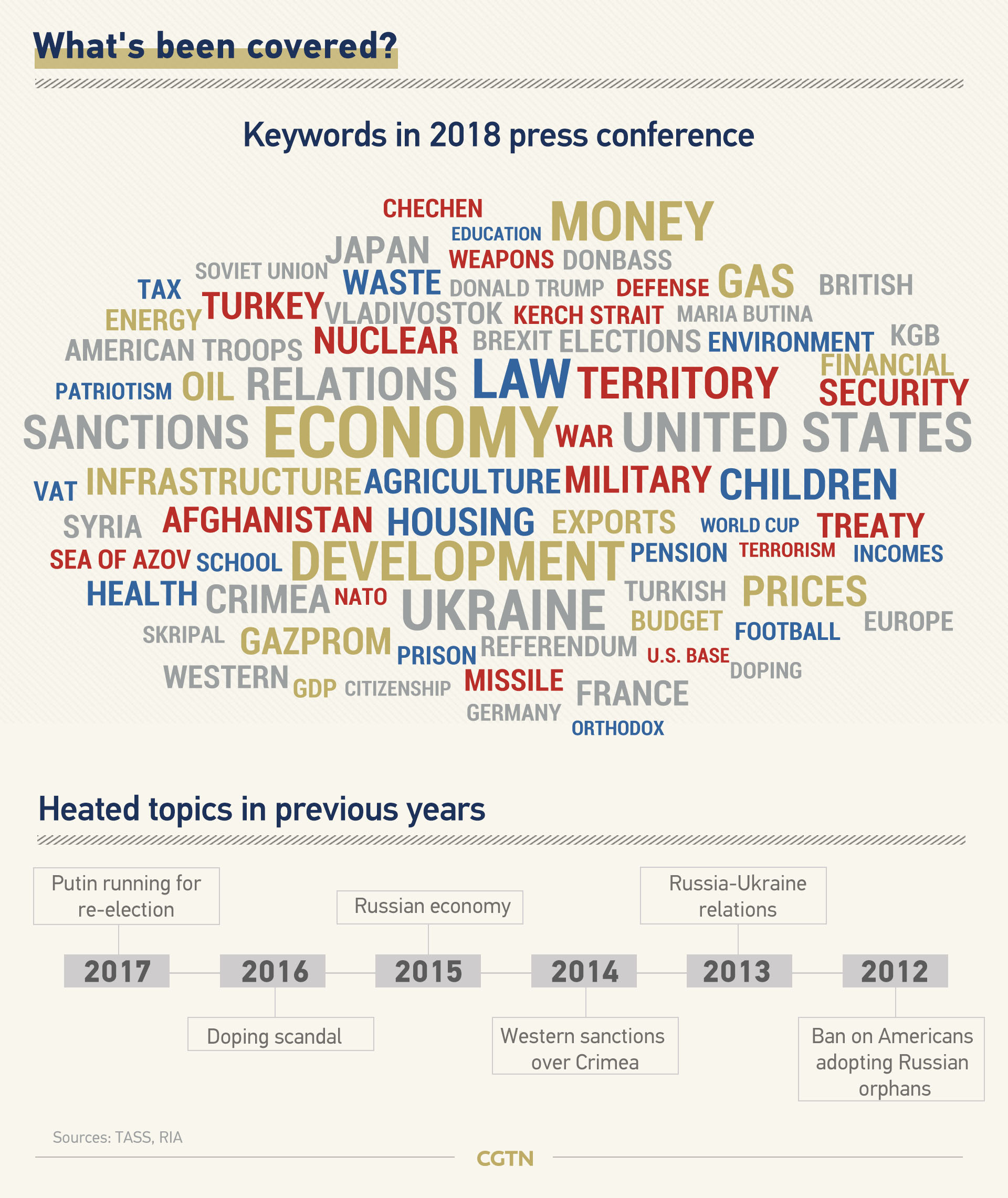 What could be covered in this year's event? If past conferences could be any guide, the first topic raised – either by Putin himself or by the journalists – is usually the economy, especially after Western countries imposed sanctions on Russia, citing its intervention in Crimea in 2014.

Here are some of the possible topics collected by CGTN. 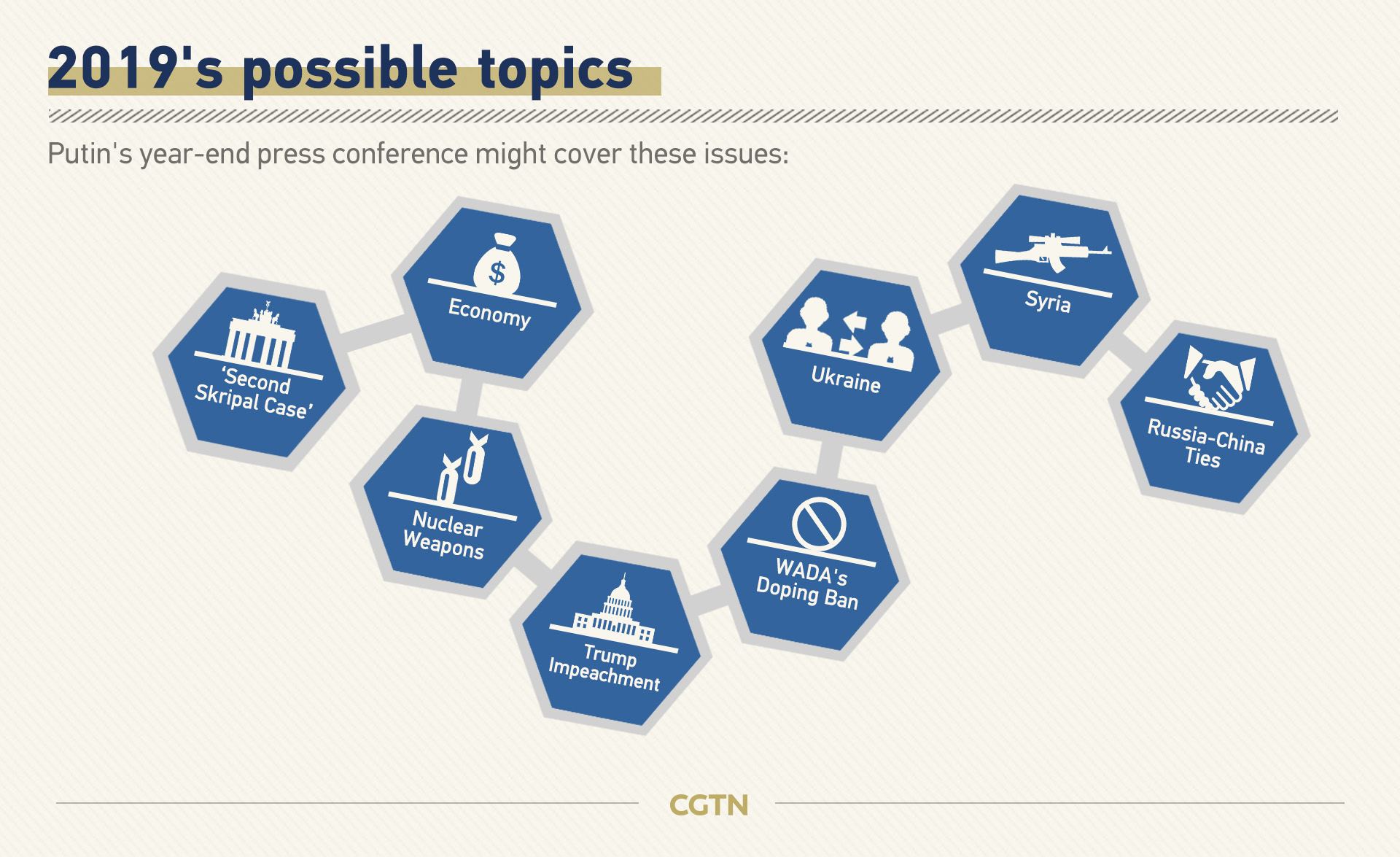 Nuclear weapons: U.S. and Russian foreign ministers on December 10 remained apart on arms control after talks, with Moscow offering to extend the only remaining nuclear arms reduction pact while Washington is calling for a broader deal involving China.

Trump impeachment: The U.S. president is facing impeachment over charges accusations that he delayed nearly 400 million U.S. dollars in aid to Ukraine to combat Russian-backed separatists as he pressed for an investigation into the election theory as well as into his domestic rival Joe Biden. Russia has always denied meddling.

Economy: To revive the sluggish economy, Putin has put 13 projects, ranging from healthcare and education to infrastructure, at the heart of his fourth six-year term that began in 2018. He has ordered the government to try to raise economic growth above the world average by 2025. 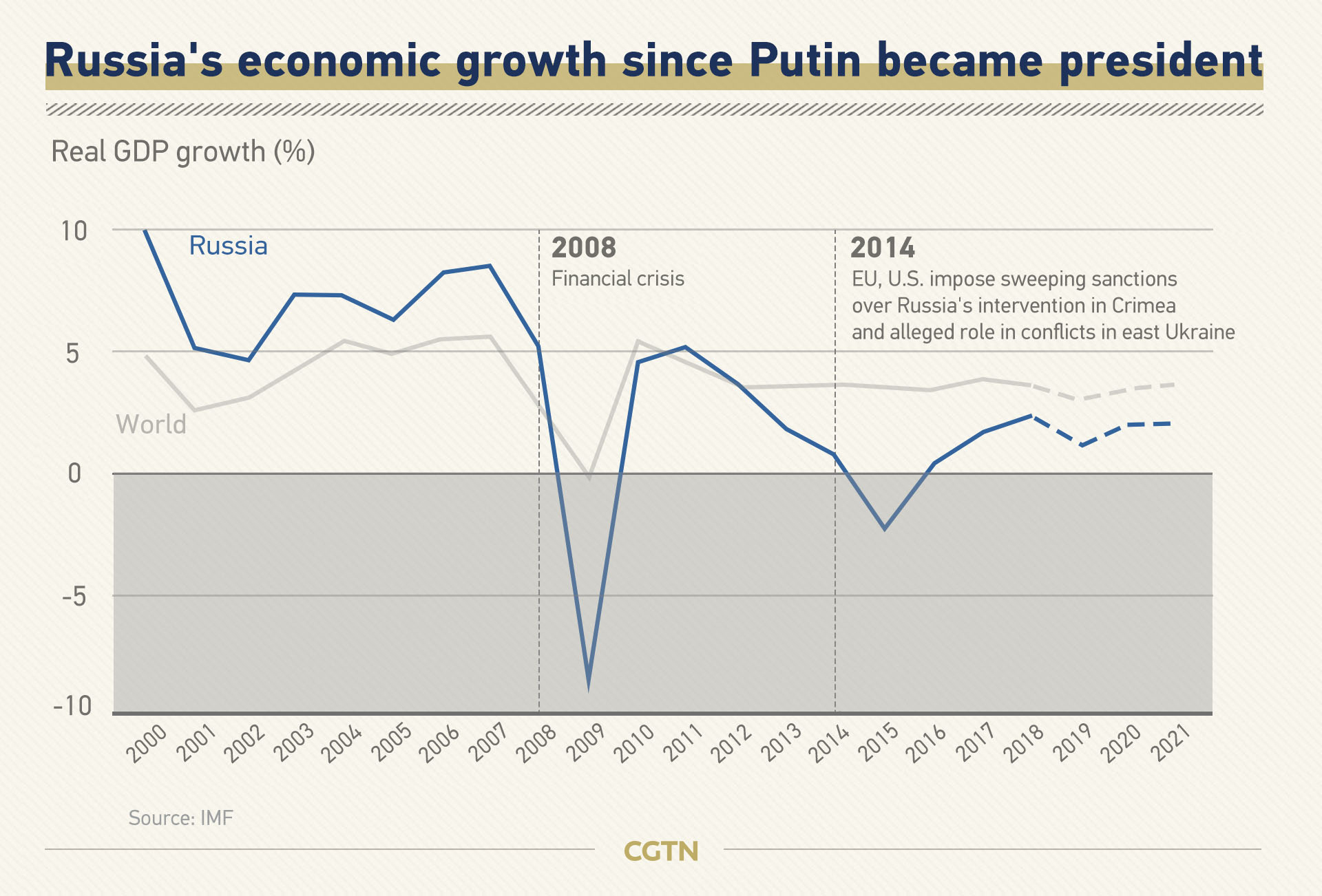 Doping: World Anti-Doping Agency (WADA) imposed a four-year ban from participating in international events on December 9 for a string of state-sponsored offenses and what it called the country's brazen efforts to mislead investigators. Putin slammed the ban and called it politically motivated.

"Second Skripal case:" Germany is reportedly opening a formal investigation into suspicions Russia was behind the killing of Zelimkhan Khangoshvili in central Berlin earlier this year, which the Kremlin has denied.

Ukraine: Face-to-face talks between the leaders of Russia and Ukraine yielded modest progress, with tentative agreements on prisoner exchanges and a total ceasefire, but no political breakthrough to the five-year old conflict in southeast Ukraine.

Syria: The Kremlin announced Monday that it expected Idlib's situation to be settled soon by "liberating the province from terrorists" in a way that guarantees the security of Russian forces and the Syrian military.

Turkey: Turkey has already agreed to buy two consignments of S-400s from Moscow, triggering a crisis with the United States and possible U.S. sanctions, but Ankara is discussing technology transfer and joint production with Moscow for the second batch.

Cracking some jokes, maybe: During last year's press conference, questions like "When are you getting married?" made the marathon meeting a bit of fun, so maybe this year, the president will face questions about being one of Russia's "most eligible bachelors".