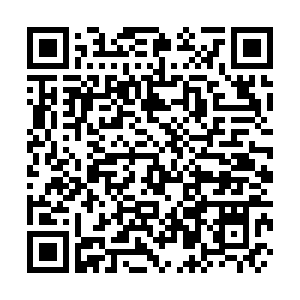 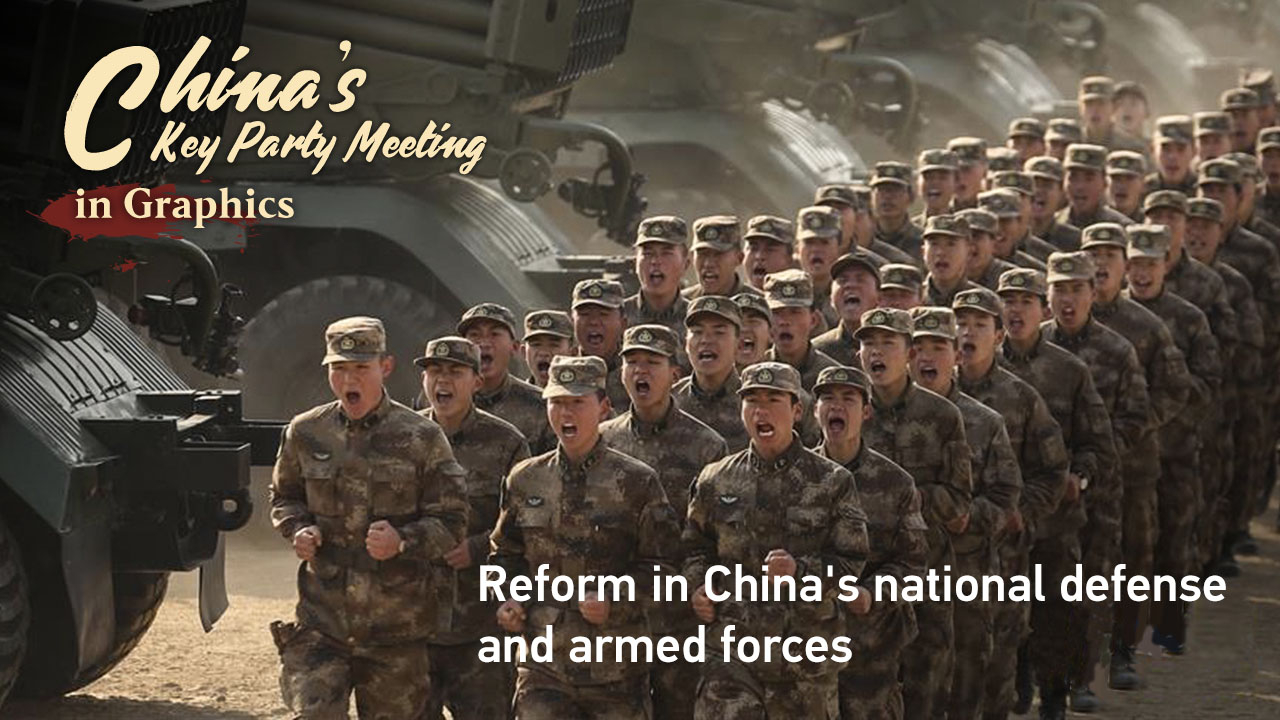 Deepening national defense and military reforms are in line with the requirements of the times to realize the Chinese dream of national rejuvenation and China's strong-military dream.
-  Chinese President Xi Jinping

Regarded as one of the biggest military reforms in modern China, the latest military reform has been on the agenda for China's rejuvenation in the new era since the 18th Communist Party of China (CPC) National Congress, in 2012.

What are these achievements? Here are some key developments in recent years: 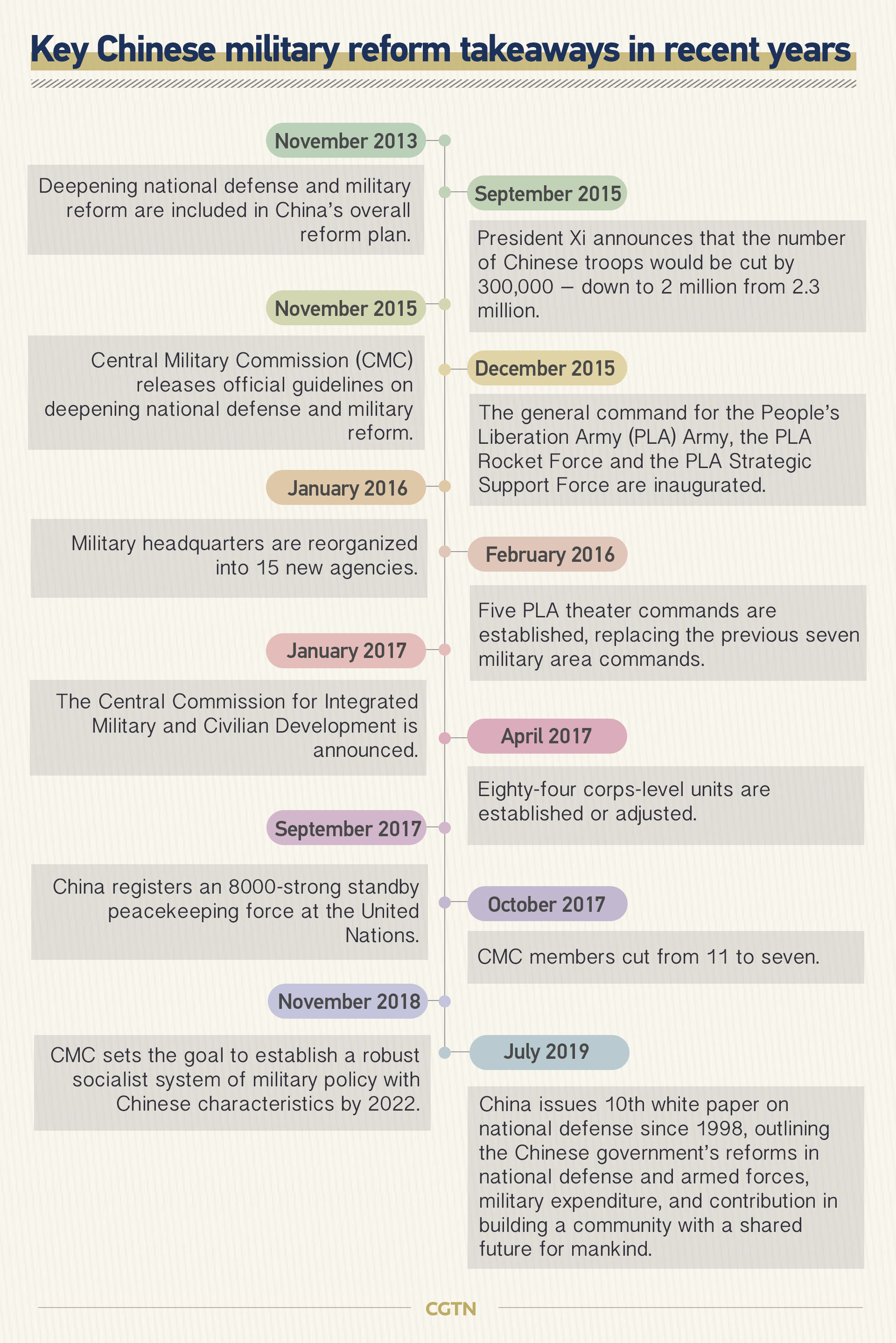 What are the goals?

According to a guideline on deepening national defense and military reform, released by CMC, the decision to deepen the reform aims at breaking down systematic, structural, and policy barriers, modernizing the organization of the military and improving combat capacity.

The overall goal is to achieve progress and concrete results before 2020 in military administration and joint operational command, optimizing military structure, enhancing policy systems and civilian-military integration, and building a modern military with Chinese characteristics that can win information age wars.

To build a firm defense and strong military, the reform is guided by the "CMC chairman responsibility system" to ensure the top leadership of the armed forces is centralized in the hands of the CPC Central Committee and the CMC.

At the fourth plenary session of the 19th CPC Central Committee this year, President Xi urged to uphold and improve the Party's absolute leadership over the armed forces and ensure that they will faithfully fulfill their missions in the new era.

To deepen the national defense and military reform and to build a strong army, a series of measures have been taken to remove institutional barriers and solve structural and policy-related problems.

The top priority of maintaining the authority of the leadership core is to safeguard the CMC chairperson responsibility system.

To enhance the operational effectiveness of the military, four general departments within the CMC were reshuffled into 15 agencies under the CMC leadership to streamline the chains of command.

The parts of the four general departments responsible for managing the ground forces were integrated into a new PLA Army leading organ.

The Second Artillery Force, which commands China's missile forces, was recommissioned as the PLA Rocket Force.

The seven military area commands were disbanded and have been reorganized into five theater commands, named by their strategic locations in north, south, east, west, and central China. 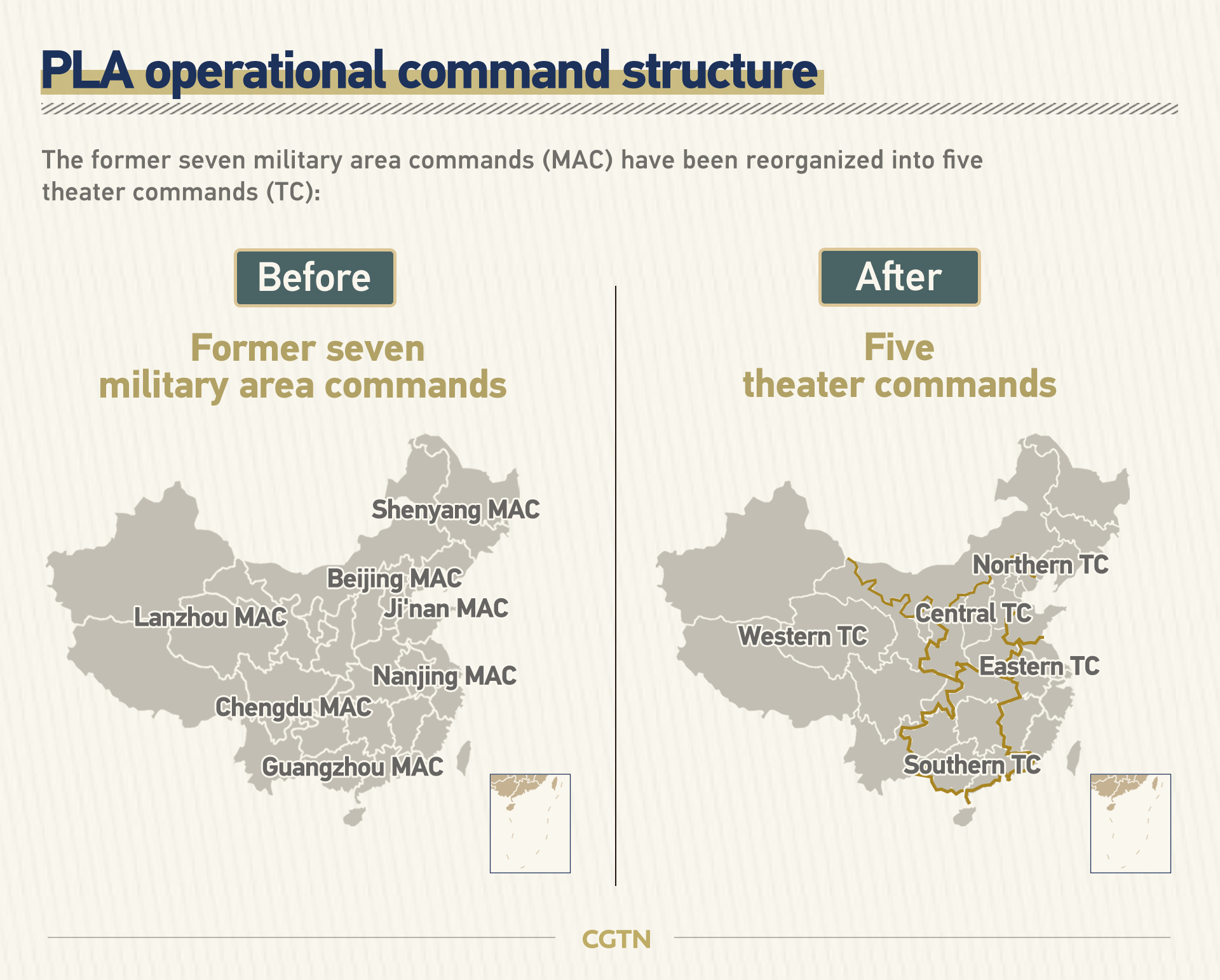 To optimize the size and structure of the army, adjust and improve the proportion between various troops, and reduce non-combat institutions and personnel, the Chinese military has cut 300,000 personnel to keep the total active force at two million.

The PLA has significantly downsized the active force of the PLA Army to less than 50 percent of the armed forces, with the previous 18 group armies reorganized into 13 new ones.

The active force of the PLA Air Force maintained at a steady number, that of the PLA Navy and PLA Rocket Force were moderately increased, and the force structures of all services and arms were optimized.

The number of personnel in the leading organs at and above regiment level has been cut by about 25 percent and that of non-combat units by almost 50 percent.

Besides, new laws and regulations on military issues have been introduced or amended, including a revised regulation on civilian personnel in the military, released in 2017. 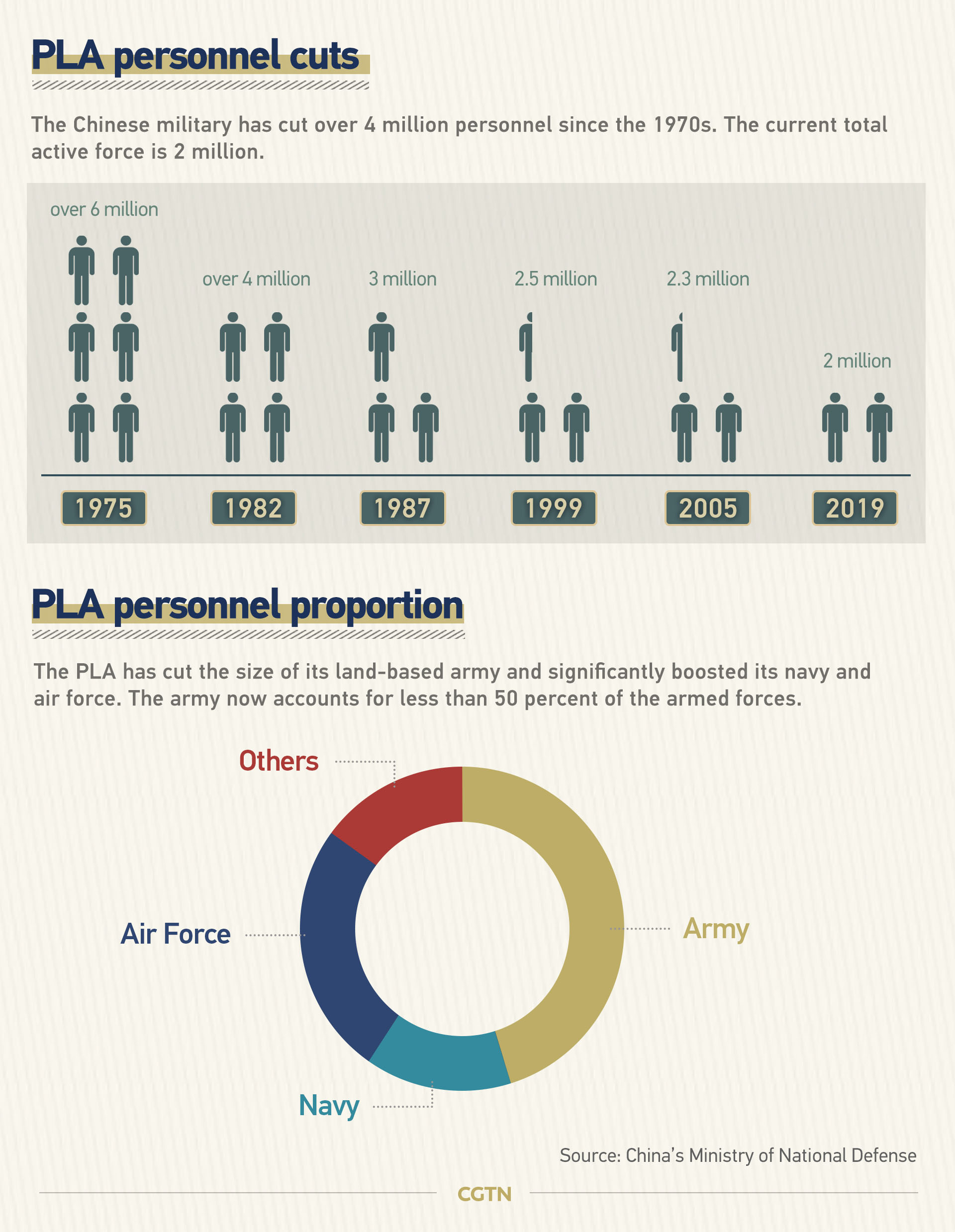 New mission in the new era

The envisioned world-class armed forces must provide a strong backing to the protection of China's sovereignty, security and development interests, the safeguard of world peace and stability, and the realization of the national rejuvenation, according to Xi.

China's military modernization is primary to safeguard its territory and sovereignty, dismissing the "China threat" allegation. The white paper also acknowledged China's need to protect its investment and citizens overseas in the new era.

How is China strengthening its military?